By Law: In the driver's seat, along for the ride 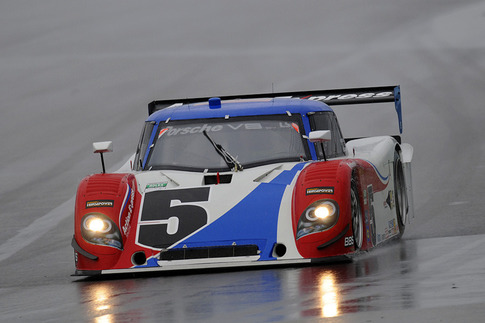 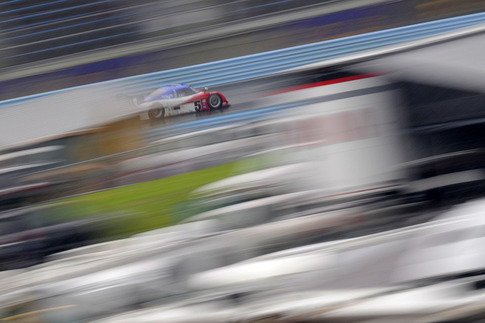 Rain relenting a bit, between Turn 1 and Turn 2. Photo by Bob Chapman/AutosportImage.com 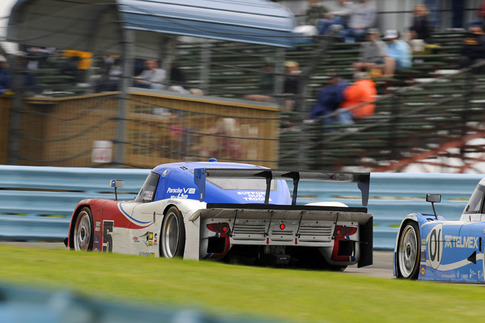 Here, you get a look at bodywork differences between the old and the new Riley prototypes. Note the gap in front of the front wheel and the line of the front fender. Photo by Bob Chapman/AutosportImage.com 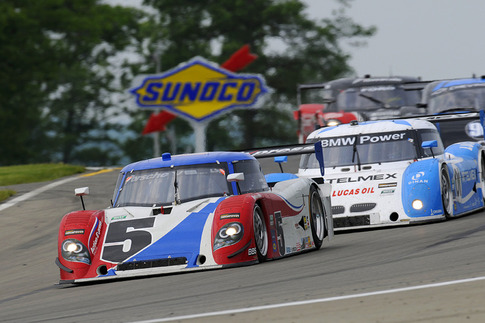 Here, the difference in old vs. new rear fenders is evident. Photo by Bob Chapman/AutosportImage.com 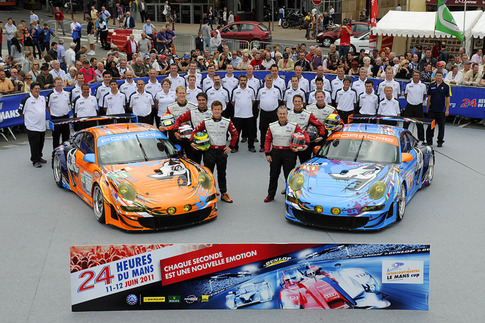 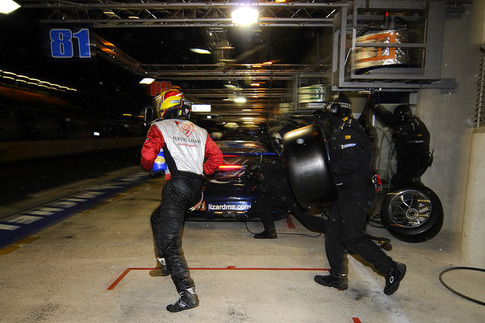 Darren gets in the car for what would be his final stint. Photo by Bob Chapman/AutosportImage.com 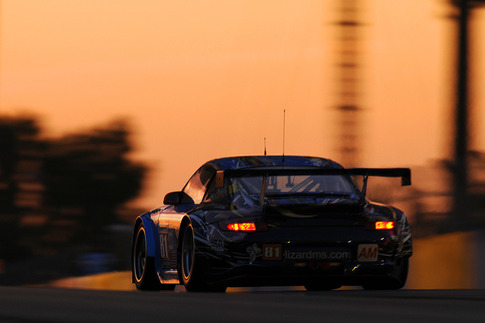 Sunrise at the Dunlop Bridge. 30 minutes later, Darren would turn the car over to Spencer Pumpelly. He wouldn’t get another chance to drive. Photo by Bob Chapman/AutosportImage.com 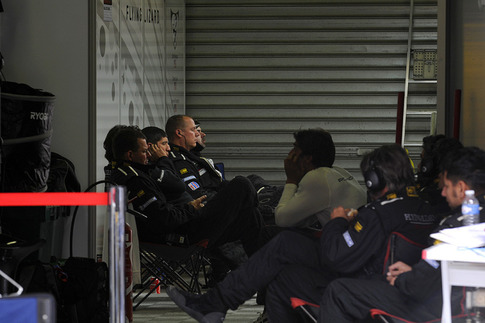 The closed garage is evidence of the retired #81. Note the subdued crew. Photo by Bob Chapman/AutosportImage.com 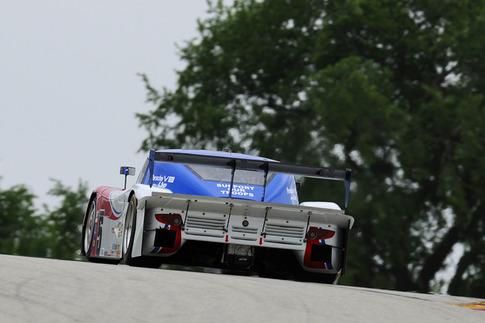 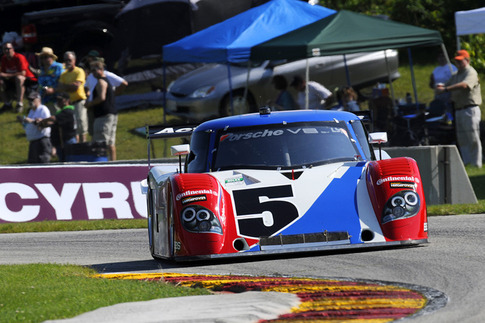 Turn 7 into the “Hurry Downs” at Road America. Photo by Bob Chapman/AutosportImage.com 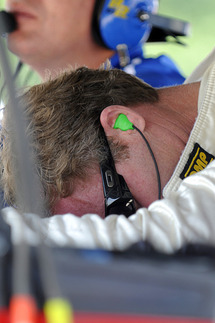 Sometimes, the frustration is just too much to bear. Photo by Bob Chapman/AutosportImage.com 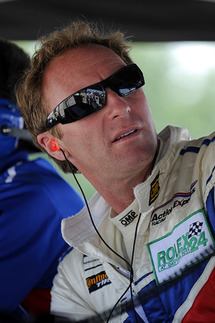 “Our results were forced by other circumstances. Remembering this makes it easier to look at the big picture...” - Darren Law. Photo by Bob Chapman/AutosportImage.com

Racing is a very mental sport, and over the course of a weekend it can seem to have more downs than ups. It comes as no surprise that during June I had great moments and some not so great over the course of three very different races. But when things aren’t going well and luck isn’t on our side, even the smallest of victories give the team a much-needed boost to keep pushing harder and look past the low points of racing.

Throughout the month of June I competed in the Grand-Am Rolex Six Hours of the Glen at Watkins Glen International; the Le Mans Series 24 Hours of Le Mans at Circuit de la Sarthe; and the Grand-Am Rolex Sports Car Series 250 at Road America. Each event offers a very different experience due in no small amount to one factor: length. The Watkins Glen race in New York state was a mid-length six hour endurance event on a 3.4-mile course; Le Mans in France, the ultimate test of endurance racing, was for 24 hours on a high-speed course just under 8.5 miles long; and the race at Road America in Wisconsin was a short two-hour sprint with each lap spanning over four miles.

The six hour Rolex Series race at Watkins Glen came first and was with my Action Express Prototype team. It started as a stressful event because we had heavy rain at the beginning of the race, and the risk of making a mistake was multiplied by the conditions. Bad weather forces everyone’s hand in strategy as it affects fuel mileage, pit stops, driver changes, stress on the electronics, and tire choice. For this type of race I begin with a bit of caution and let things play out for a few hours before I start worrying about what is happening on track. You learn over time that, in a race of three hours or more that has treacherous conditions, mistakes happen more easily for everyone.

We weren’t great in qualifying at the Glen, but we knew we had a good race car and felt confident going into the race. At the start of the race with heavy rain we had to make several pit stops because our windshield was fogging so badly we could barely see. This put us far down in the field, and we lost a lot of track positions. At the time I thought we were done for, but racing is hard to predict, and I knew that our position could easily get better as the hours passed.

Then mid-way through the event as the track was drying our car was really quick. We worked all the way up to the front our class and led for quite a while! Just after making a pitstop in first place, my teammate, David Donohue, called in saying that the exhaust had changed note and the engine had a loss of power. The engine had a broken header pipe. When this happens you also have to worry about the hot exhaust burning something in the engine bay, but we kept going as the problem didn’t get that bad.

We were hanging in there in the top five despite our exhaust header issue, and then we had a late full course caution. At this point we were running fifth but had fresher tires than the two cars directly in front of us. With two laps to go just after the re-start I went around the outside of the fourth-place car and got hit. It broke half of the nose off the car, but I was able to catch up to the group and make another move. Again I was hit and pushed into the grass. In the end we finished fifth with grass packed up in the radiator duct and an overheating engine. So even though we had a reasonable result, especially considering all that happened, we knew we could have finished on the podium. That is why I feel OK about our weekend, but I really didn’t have much time to dwell on it anyway. I had a flight to France immediately after the race to attend and compete in the 24 Hours of Le Mans with the Flying Lizard Motorsports team.

Le Mans is a completely different type of event, and it occupies so much time and focus that you just switch gears and look forward to race weekend. It is a long week leading up to the race with media interviews, autographs, parades, and many other things that pull your attention away from race preparations. There was a lot of hype surrounding our team coming into the event this year because it was the first time Flying Lizard was entering two cars instead of one for this race. We had even put together a special paint scheme for the cars to honor all of the past drivers for Porsche that had an overall victory in the event.

For the most part, things went well during our time on track. We were organized, everyone was able to get quality seat time in both the day and night, and we were comfortable with our car. Qualifying at Le Mans is done in a very different format than what we are used to. Over several days we have several sessions to put in a qualifying time. The best time in any one of these sessions counts as the official qualifying time. We qualified third in our class, GTE-Am, though we didn’t attempt an official qualifying run. We knew we had a good car and could have put in a faster lap if we were in qualifying trim, but since the race is more important than the qualifying position, we elected to focus on our setup and race strategy instead.

Just as we had anticipated, things went according to plan for most of the race. We were running well, pace was good, strategy was as expected, and we led GTE-Am for a lot of the first half of the race. After 18 hours of racing, and with the sun coming up the next morning, I went to take a nap at around 6:00 AM. At this point we had almost a full lap lead on the next car in our class. When I woke up about an hour and a half later, I went to timing and scoring and saw what I dreaded most: We were retired from the race due to an engine issue. This was devastating.

We all felt this was our best shot at winning our class at the 24 Hours of Le Mans and it slipped away from us with less than five hours left in the race. It was an issue that was out of our control, but it was deflating nonetheless. After we packed up the cars and equipment we had a two-hour drive to Paris, during which I wasn’t very friendly. Looking back I am sorry my family had to ride with me when I was in a bad mood, but I am glad they were there to support me. Every year we have a team party after the race, and I can honestly say I was a sore loser — I wasn’t social and just really wanted to take a little time away. I was lucky to have about a week and a half before my next event, so I took a vacation with my family in both France and Italy over the next 10 days, which helped to ease the loss and to take my mind off what had happened for a while.

Refreshed and clear-minded after my vacation, I felt I had over-analyzed our bad luck at Le Mans and got back to focusing on my next event. Luck plays a part in racing, both good and bad, and you just have to move on and get re-focused if things don’t go your way.

My next event was with Grand-Am at Road America in Elkhart Lake, Wisconsin. The Action Express prototypes are running an older generation body than the rest of the class, and because of that we are less efficient aerodynamically than most of our competitors. Just as we anticipated, we struggled a bit. Our qualifying position wasn’t ideal and we knew that we possibly had a top-five car, but not a winning car. As the race progressed we were holding our own and saw potential for a top-five finish, but on our final pit stop we had a clutch problem that caused us to lose a lot of ground and forced us to a sixth-place finish. This was really a disappointing way to end my trip.

We didn’t have the speed to be as competitive as we should have been, but I always try to recognize the positive aspects of a disappointing finish. After the Road America race we had many team discussions to analyze our performance, and we feel we have some solutions which give me more confidence for our next races.

We didn’t achieve great results for the 24 Hours of Le Mans or at Road America, but I left each event feeling good about how I drove and how our team performed; our results were forced by other circumstances. Remembering this makes it easier to look at the big picture and to expect good results at future events, and it gives me hope that luck will also be on our side.