A racer reflects on competing concurrently in Grand-Am and ALMS 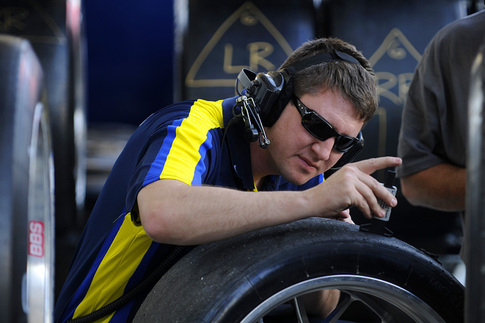 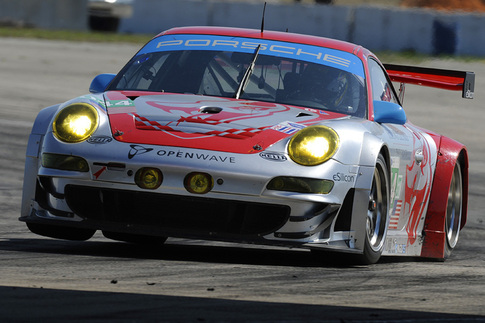 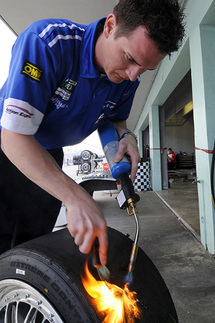 A torch is used to heat any built-up rubber on previously used tires. The excess rubber can then be scraped from the tire in order to accurately check tread depth and/or use the tire for another session. Photo by Bob Chapman/AutosportImage.com 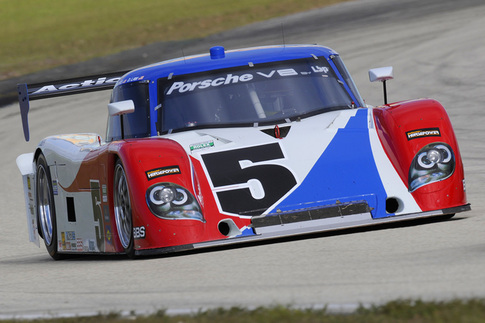 Grand-Am: As a purpose-built race car, the Daytona Prototype's handling characteristics are more predictable than those of Porsche's 911-based race cars. Photo by Bob Chapman/AutosportImage.com 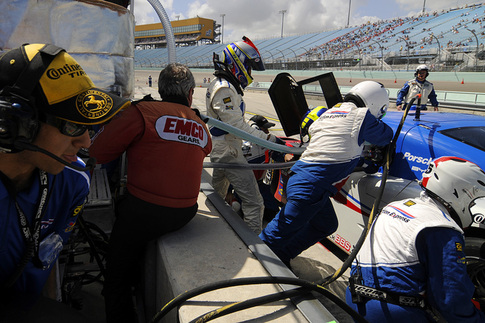 Grand-Am: A pit stop with a driver change. Darren Law stands ready to jump into the Daytona Prototype once co-driver David Donohue jumps out. Photo by Bob Chapman/AutosportImage.com 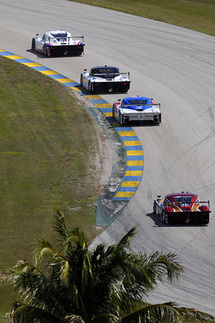 Grand-Am: The Action Express #5 Daytona Prototype is the third car from the front. Photo by Bob Chapman/AutosportImage.com 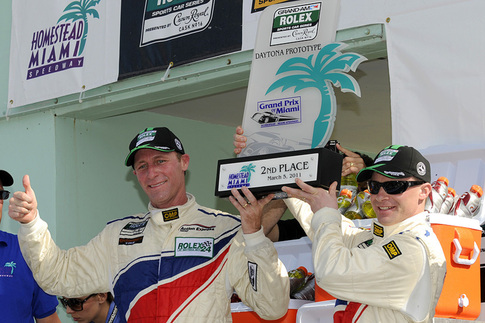 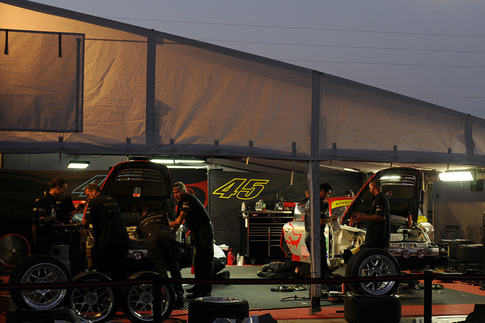 ALMS: The pit crew works on car setup late into the night, before the race. Photo by Bob Chapman/AutosportImage.com 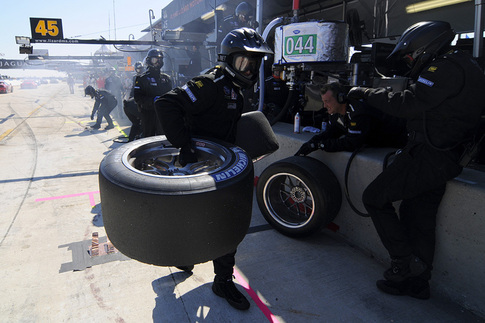 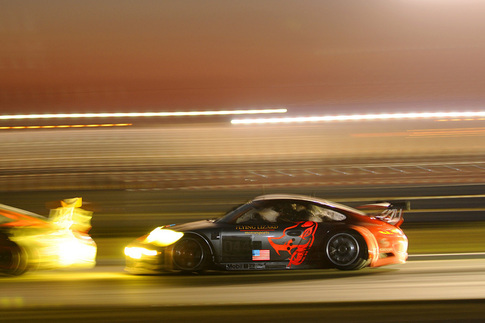 ALMS: The 12 Hours of Sebring runs into the night. Photo by Bob Chapman/AutosportImage.com

March was a very busy month for me. I raced at the Grand Prix of Miami in the #5 Action Express Daytona Prototype for the Grand-Am Rolex Sports Car Series and at the 12 Hours of Sebring in the #44 Flying Lizard Motorsports Porsche 911 GT3 RSR for the American Le Mans Series season opener. There are similarities between these two events – they were both sports-car races, both races were in Florida, and both of the teams are two-car operations – but that is about it. I thought it would be interesting to compare a few items between them.

For those who didn’t follow the races, I had a great race in the DP car and an average race in the RSR. In the DP at Homestead-Miami Speedway, my team finished on the podium in second place. It was a tough race but a very short weekend – I was only on the road for three days, which included the race, qualifying, and practice. Sebring, on the other hand, didn’t go as well. We finished seventh in class and spent more than a week at the track.

Homestead was a sprint-race format; it was only two hours 45 minutes. We had to be on our game from the instant we unloaded the car off the truck. Practice and qualifying were on one day, and a warm up and the race were the next day. We had very little time to improve the car and decisions on race setup had to be made right away.

For the Sebring 12-hour event, however, we were there for over a week! We had several test days and lots of time to try different setups on the car and plan for the race. It is a long race, it is very hard on the equipment and the drivers, but I think it is most grueling for the crew. They were up late every night making sure we had a reliable car for the whole race.

The two circuits are vastly different. Homestead is a combined oval and infield course. It has high-banked corners and elevation changes in the infield. It is a fairly simple layout – eight corners and pretty smooth – but there is almost no grip on the surface of the track. This makes it very difficult to manage the tire longevity. We slide so much here and get so much wheel spin that it is easy to “cook” the tires and lose the initial level of grip in less than 10 laps. It was a real mental exercise to keep the car competitive until the end of the race.

In Grand-Am, we are limited to five sets of tires for the entire weekend. We were conservative in practice and saved two new sets for the finish of the race. We also had to control our driving and not push too hard too soon. If we drove it into a corner too deep, we risked lock-up. If we got too aggressive with the throttle application, we risked using up the rear tires too early. So this was a real strategy race, both from the pits as well as from the driver’s seat, and we played it right. It was great to be up on the podium again!

Now move ahead to Sebring, a completely different situation. This track is completely flat. It has 17 corners and it is extremely bumpy. I don’t know of any other track in the United States that has the size and number of bumps that Sebring has. After running on this track for over a week, there is a lot of rubber built up on the racing line and it develops a very high level of grip. You are still required to manage your tires, but in general you can drive the cars very hard, lean on the tires, and not worry about too much degradation of the grip level over the course of a stint. This is a very challenging track and it is very hard to race at ten-tenths for the 12 hours. Strategy is critical in every race, but with a 12-hour event we have a little more leeway if we happen to fall behind in the early stages of the race. Obviously, seventh place isn’t as rewarding as second, but just finishing this race is a victory!

Not only am I racing in different race series on a variety of tracks just weeks apart, but I am racing in two completely different types of cars.

The ALMS GT car I race is a production-based Porsche 911 GT3 RSR. Although it is based on the production car, there are a lot of modifications to make it a race car. We use a 4.0-liter, six-cylinder, boxer engine – bigger than any motor currently offered in a production street 911. It makes approximately 480 horsepower with the required air-inlet restrictors.

The tires are a lot wider than those on a production car and we have modified race-tuned suspension and shocks. To allow room for the wider tires and upgraded suspension, the car is equipped with detachable fender flares made of carbon fiber and different aerodynamic pieces, so it definitely looks a lot stouter than a street car. The RSR moves around and bounces more than the Daytona Prototype, so most of our setup adjustments are on the suspension, with very few aerodynamic changes. The main “tub” section of the car is the original steel monocoque, but the fenders, doors, and aerodynamic additions are carbon fiber. Top speed for any track we race at in the United States is about 170 mph. Top speed at Le Mans reaches the upper 180s, mainly because of the long straight. The car is capable of going faster, but gets limited in its top speed due to the aerodynamic additions. We just can’t push it through the air any faster without more power and we need those aerodynamic features to maintain grip in the high-speed sections of the course.

In the Rolex Series, I drive a Porsche-powered V8 Daytona Prototype built by Riley Technologies. This is a purpose-built race car with pushrod suspension, and the V8 is based on the engines currently used in the Cayenne. It has approximately 550 horsepower, a sequential five-speed gearbox, and the entire body is made of carbon fiber. Top speed for this car is about 195mph.

The DP is stable; it doesn’t have a lot of suspension travel or roll. It also has more options for adjusting aerodynamics. In the prototype, you can feel the edge of adhesion a lot easier than in the RSR and it is obvious when the car is losing grip. In the GT car, there is more of a sensation of losing grip, but it doesn’t always break loose. So I’ve had to get used to going from car to car during the race season, and having an understanding of how each of them works is critical.

Tires make a difference, too. In Grand-Am, we all race on Continental tires, a “spec” tire. I like this concept because everyone is on an even playing field. We all have the same tire and no team gets an advantage by having a specific tire suited to its needs. The downside is that the tire has to be a compromise. It has to suit all types of cars and conditions with a compromised compound for all tracks. On the other hand, there are multiple tire manufacturers in the ALMS. This is good if you have the optimal tire company, because they can develop a tire suited to your specific car’s needs. The Flying Lizard RSRs use Michelin, which is the premier tire to have in this series, and we have many choices of tire compounds and constructions available each weekend to match the conditions.

There are many differences between the two programs, but this is one of the many things I love about motorsports – I look forward to racing in both Grand-Am and ALMS all year long. 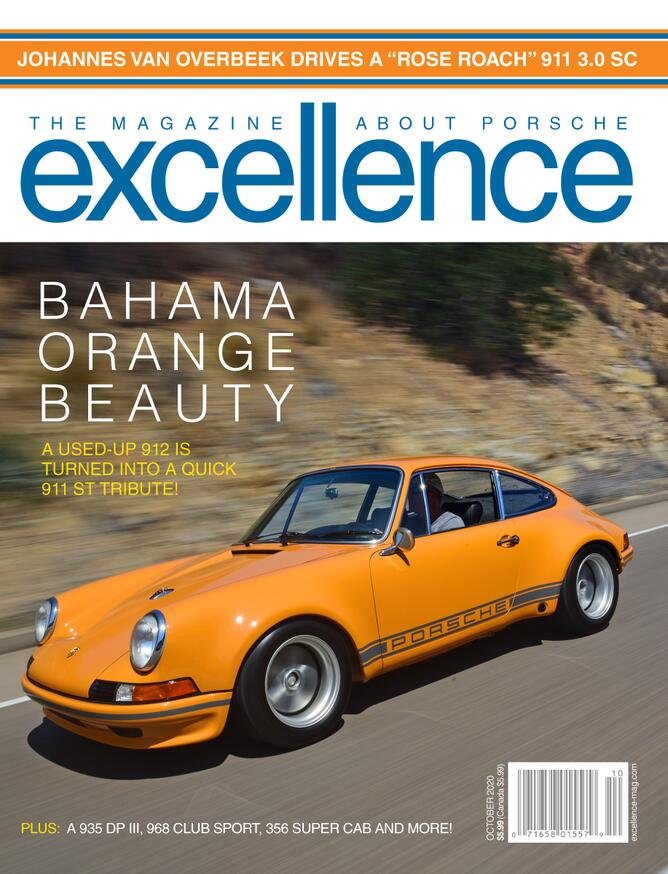