By Law: Concrete Jungle - Taking Racing to the Streets 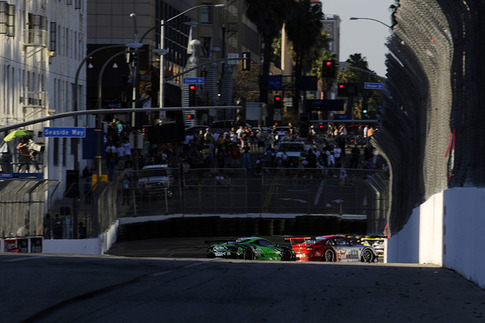 The street circuit at the Long Beach Grand Prix. For some people, the roads of their commute to work are transformed into a full-blown racetrack for a weekend. 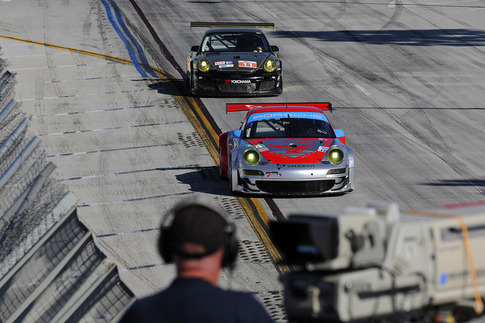 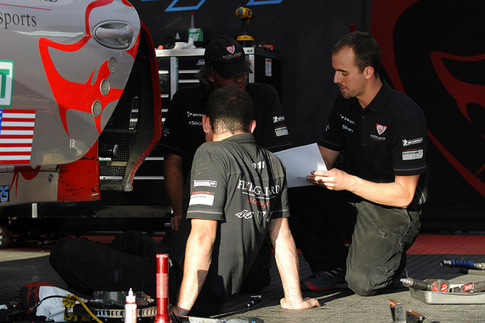 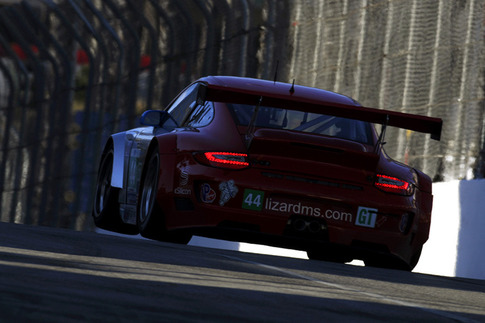 ...But even the best setup struggles to cope with the demanding terrain of a street circuit. 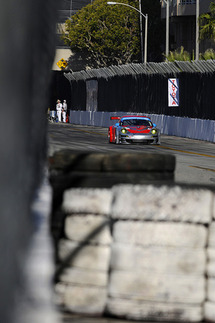 Concrete barriers form a street circuit's outline. They act as protection for bystanders but imposing obstacles for racers. 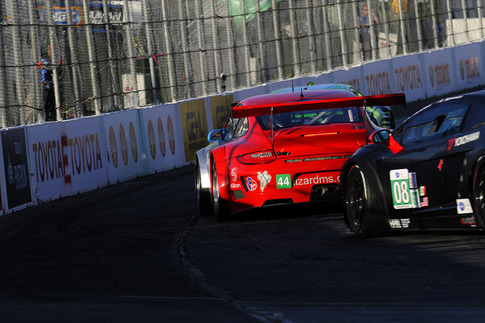 A driver must push the limits of his or her car and ability to do well, but it's a fine line between pushing the limits and overstepping them. 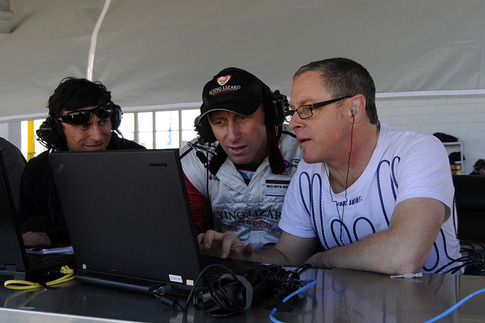 Co-drivers Darren Law and Seth Neiman debrief and analyze lap data with an engineer after a session on track. 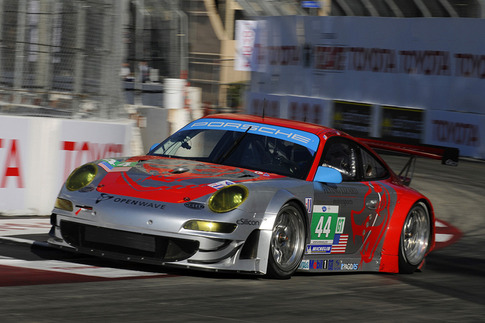 Apex curbing is absent on the inside and outside of corners, limiting a driver's ability to make adjustments to the racing line. 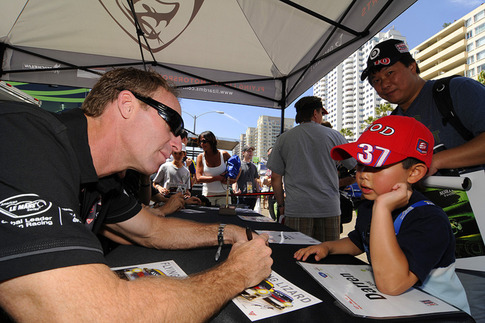 Street circuit racing is very accessible for both racing fans and casual observers.

Each year, in both the Grand-Am Rolex series and the American Le Mans Series, we have a couple of events that are conducted on street courses – temporary racing circuits constructed on city streets and raced on over the course of a weekend. The endurance sports car events that I race in are not the only driving events that take place on street circuits, and often we are racing in conjunction with several other race series, such as Indy Car.

So far this year, I have only raced on one street circuit, at the ALMS Toyota Grand Prix at Long Beach, but I am set to race at a brand-new street-circuit venue next weekend for the American Le Mans Series’ Baltimore Grand Prix. This will be the first time for the city of Baltimore to host such an event, and this creates many challenges not only for the city and the promoter but for the drivers and the teams, as well.

Street-circuit racing is very unique in that it takes a different approach than what’s needed at a traditional racetrack, both from the drivers’ standpoint and the engineers’ standpoint. It also goes without saying that the risk factor for mistakes is much higher. And when mistakes do happen, the consequences are more significant.

Street Circuits vs. Traditional Racetracks
The first and most obvious difference between a racetrack and a street circuit is that the latter is surrounded on either side by concrete walls, leaving little room for error at both the entry and the exit of any corner. The track provides some runoff area at the end of the longer braking zones, but that is usually limited.

Since the course is lined with concrete walls, we don’t have apex curbing lining the inside or the outside of corners, which limits how much we can tighten and/or widen the racing line. An inch too far and you’re in the wall. The course surfaces are also different. At a traditional road racing course, there’s a limited amount of paint on track and the asphalt is smooth. It is used for one purpose only: racing. As for a street circuit’s surface? Well, if you drive a car, you probably already know what it is like. There are lots of spilled chemicals, painted lines, abrupt curbs, manhole covers, bumps, and crowned roads, to name just a few.

When we first arrive for a street circuit race, debris is one of the first things we have to deal with. It is always very dusty and dirty from all of the equipment that has been there for days moving in barriers and grandstands and other equipment. And then there’s the debris that is the result of the road being used daily by commuters and other city goers. My teams’ general rule of thumb is not to be the first car on track. We usually wait for at least 10 minutes before we go out and let the first cars on track be “the sweepers.”

Engineering for a Street Circuit
Before we first go on track, the engineers are provided track diagrams with elevation changes, lengths, and radii of corners and straights. They have to run simulations and compute corner speeds, gear ratios, fuel consumption, etc., without knowing the actual condition of the track surface. After the first session, the driver/engineer debriefing is critical. We have to make quick decisions on how to deal with bumps, grip level, gearing, braking ability, etc., because we are constantly “chasing” the track due to its ever-changing condition.

A racecar’s setup for a street circuit, then, is almost always a compromise. Several different racing series run on these weekends, which means various rubber compounds from different tire manufacturers are laid down on track, affecting cars’ grip and handling characteristics. Sometimes the surface will be compatible with our setup, and other times it won’t.

Some cars are good in long corners and can carry a lot of lateral load, and others are better at putting the power down in slow, tight corners. Most street circuits are usually made up of tighter corners that favor cars that create a lot of rear-end mechanical grip. This really plays to an advantage of our ALMS Porsche 911 GT3 RSR cars, which create that grip by having wide tires and a rear-engined chassis that concentrates the car’s weight at the rear.

We set up the car for mechanical grip if the course has tight, slow corners, or we may “trim out” and set up the car to be faster in a straight line if there are a couple long straights. Again, it is always a compromise. And finding the best compromise is especially hard for the engineers because driver feedback isn’t always consistent. The Baltimore circuit will be even more of a challenge since no one has raced there yet. The engineers probably have the most stressful job during these weekends, at least until the start of the race.

Racing on a Street Circuit
For the most part, lap times are dictated by how well a car handles, the driver’s comfort, and his or her familiarity with the track. So when we go to a brand-new circuit, such as the one that’s being built for next weekend’s race, it takes a little time to get up to speed. No matter what our handling issue may be with the car, it’s almost guaranteed that we will reduce our lap times by just driving on the track and getting to know its layout while we wait for debris to be cleared and tire rubber to be laid down.

This is a different approach to driving than what we take at a traditional road racing circuit, where we know the track, the car is set up for it, and we push hard right out of the box. The lack of runoff room on a street circuit, however, is always in the back of our minds, and that is reflected in how we drive. I personally enjoy the challenge because it is very rewarding and a lot of fun when you get it right. But there are some drivers who dislike the limits that walls impose. You have to push hard, but a mistake is almost always more costly. Knowing your car’s limit and the limit of your ability – and knowing not to overstep those limits – is critical for a clean race.

The narrowness of a street circuit is also a factor in racing conditions. Making a simple mistake is bad enough, but racing around so many other cars forces you to use different tactics than usual. You have to be extra decisive when making a passing maneuver. The approach has to be more thought out, and you just can’t go for any open hole. Your choice needs to be conservative but also decisive and committed. Given the nature of street circuits, passing areas are limited, and there is no room to push each other around. Because of this, qualifying and track position are always critical at a street circuit.

I am really looking forward to racing at the Baltimore Grand Prix next Saturday. I always enjoy the challenge of dealing with different driving conditions and forming race strategies that fit a particular street circuit. And since this will be my first time in Baltimore, I can’t wait to visit this famous city.