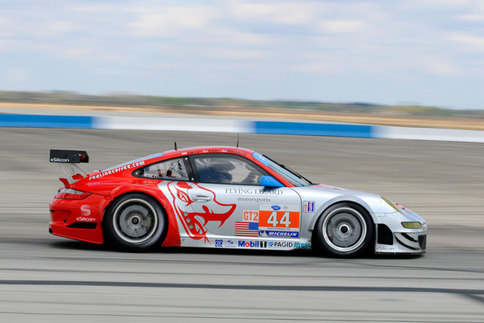 The Flying Lizard Motorsports team is here at Road Atlanta for the start of the Petit Le Mans week. It’s a tough one for all of us because it’s a very long event. Every team is here for almost 10 days.

We arrived last Friday, September 24, and tested over the weekend. We had a very good test with both Flying Lizard Motorsports Porsche GT3 RSRs; both were quick. We’ve driven here enough in past races so we already have a basic setup. The start of this test was partly devoted to bedding in brakes and parts and pieces. There’s a lot of preparation involved in getting ready for the week’s practice and qualifying sessions and for Saturday’s race. After we finally finished preparing parts, we got down to business and started with the cars’ setups. Things went well:

The Porsche 911 GT3 R Hybrid is based under the Flying Lizard tent this weekend, so we’ve had a chance to observe it. The Hybrid race car is interesting because it’s a lot heavier than our Porsche 911 GT3 RSRs, it has a lot of extra horsepower, and it’s about 20 kph faster down the back straight, but over the test weekend their overall lap times were about the same as one of the RSRs in the GT2 class. (Ed.: For Petit Le Mans note that the GT class was split back into GT1 and GT2 categories like in the 2009 season.)

After a fairly busy weekend, we had two days off, Monday and Tuesday. We relaxed and played some golf. Jörg Bergmeister and I went out to a nine-hole course on Tuesday and hit everything but the green! It was a short course, so when we got to about the eighth hole we grabbed drivers and just drilled balls out into the forest. It was cool!

We did some other fun stuff and also worked out — everyone has to stay fit and ready for the race weekend.

Now we’re back at the track and into the official race week. Since we have the basic test work done, we’re doing all the other things that we need to do to prepare for the race. For example, we spent an hour doing driver-change practice today. We have Marco Holzer, a Porsche junior driver from Germany, who will drive with Seth Neiman and me in the #44 Porsche this weekend. It’s his first time at Petit and with Flying Lizard Motorsports, so we needed to spend some time working with the safety harness and drink bottles he will use, and basically get him situated in the car for smooth operation come race day.

Today we also have a few meetings and a practice session. Today’s track session is really short — there’s only an hour and a half of track time — but tomorrow will be a very long day for us. We have over two hours of night practice followed by qualifying on Friday and race day on Saturday.

I’ll report back after the race, hopefully with good news!