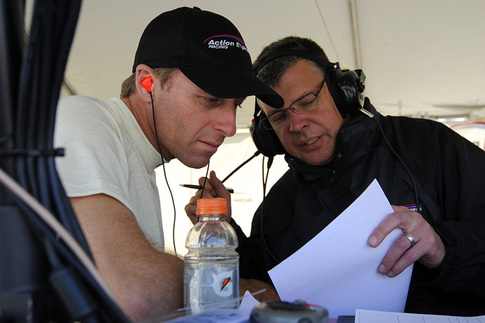 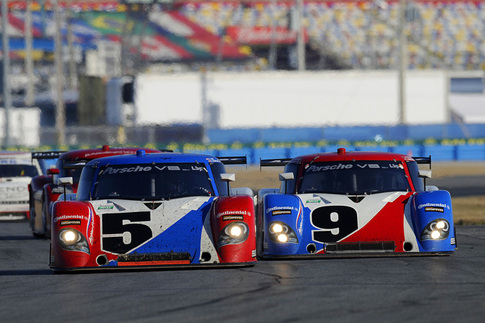 The #5 Action Express DP, the car Darren is driving this season, finished ninth. THe #9 finished third. Photo by Bob Chapman/AutosportImage.com 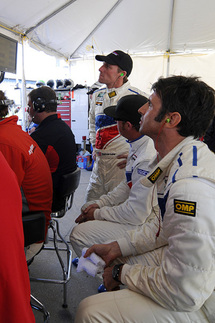 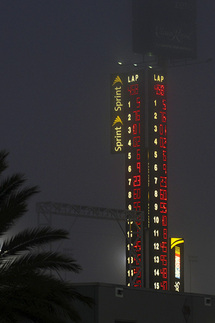 The #5 DP ran up front until problems with the car forced a ninth place finish. Photo by Bob Chapman/AutosportImage.com 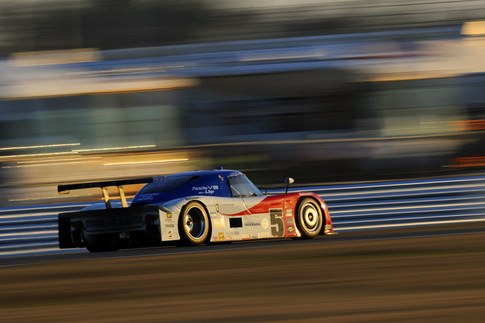 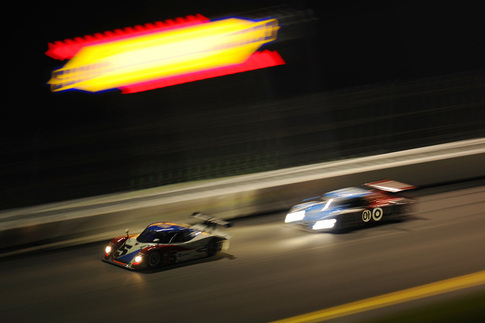 I kept a log during my race week to give you an idea of what a driver goes through during the Rolex 24 At Daytona. Our #5 Action Express Porsche-Riley Daytona Prototype was really strong and I had great co-drivers in David Donohue, Burt Frisselle, and Buddy Rice. We led a lot of the race and stayed in the top three for the first 18 hours, but some issues dropped us back to finish ninth. Here’s the story.

The Action Express drivers were part of Grand-Am Day at Camp Boggy Creek, a special camp for children with serious or life-threatening illnesses about 40 minutes from Daytona Beach. There were no children at camp while we were there — it’s a summer camp — so we participated in camp activities instead.

We had a terrific time! It’s a great time to get together with several of the other drivers for a fun day before all of the chaos starts at the race track. We did a fun charity golf event and then we built and raced soapbox derby cars. Everyone thought they could out-engineer each other, but I am happy to say the #5 Action Express car won that race! We thought, ‘Alright, here’s the first trophy for the weekend…’

Then David and I went to the track. After we checked in with the team and finalized our plans for Thursday, we set up our personal items for the weekend. For a 24-hour race, the team brings in motorhomes for the drivers so we have somewhere to rest at night and between driving stints. David and I moved all of our stuff over to our motorhome and made sure we had what we needed for hydration and meals. Fortunately, it was right across from the infield fitness center. Not that we were planning to work out; this is where we showered and it is also where our team doctors and masseuse were set up.

My day ended with a team dinner. Everyone was there — crew, drivers, owners, and sponsors. It is really the only time we can all get together before the event starts. Once Thursday morning comes around, everyone is very busy.

Thursday was packed with two daylight practice sessions, qualifying, and then night practice. Qualifying didn’t go exactly how we wanted it, but both of the Action Express cars qualified within a tenth of a second of each other. We qualified 13th, right behind our teammates in the #9 car. We were starting a little further back than we would have liked, but realistically, qualifying is not too significant in a 24-hour race — it’s more about bragging rights. Last year, our team won the race from eighth starting position. Our cars are good this year and they were handling well, so we were all pretty confident going into the race.

Friday was a short day on track for us. We had two short sessions before lunch. Most of the morning was spent installing the race engine, gearbox, and all of the race components. Most teams didn’t run many sessions. Our main goal was to make sure everything was working properly on our virtually brand-new race car and confirm that we were ready to race. After the morning sessions were done, I went to the hotel to relax, had an early dinner, and got some sleep before race day.

Race day! This was a very busy time for us, even though our race didn’t start until 3:30 PM. We were up early and there was a lot going on. We had a team meeting when we first got to the track, then immediately following we had the official driver meeting. I don’t always enjoy driver meetings, but I like going to this one. So many drivers from so many different disciplines show up, from Formula One to NASCAR, IndyCar to ALMS, and, of course, Grand-Am. It’s one of the few times a year when we all get to see each other and get together.

After the meeting, we went straight to the autograph session, followed by driver introductions. There was very little time for breaks, other than to run back, grab some food, and get ready before the race. Since I was the starting driver, it was even busier for me. The other guys didn’t drive until a couple of hours into the race, so they had a little more time to relax and set up.

Since I was the starting driver, my first stint stretched from 3:30 PM to almost 5:15 PM. It was a good one. I started 13th and moved up to fifth and I was happy with how the car was running. We made minor adjustments to help the handling as we went. Our plan was to run a steady pace and try to stay out of trouble through the night as it got pretty hectic with all the GT cars out there; some people just weren’t thinking! For my two-hour stint — a double — I just played it safe. If a move was questionable, I didn’t make it.

After pitting for a driver change, I dried my helmet and suit, changed into dry clothes, made sure I was hydrated, and ate some food. My next stint would start at around 12:25 AM.

By 3:15 AM I was finally finished with my second drive in the car — almost a triple stint! I drove for approximately two and a half hours.

I was really tired at the end of the stint, as you can see in this video:

Things tend to settle down on track in the early morning hours of a 24-hour race. We’re all trying to get through with a good car for the daylight hours, when we will need to push hard to the finish. To this point, we had been really trouble-free and running at a good pace up front. Things were going well. We had some minor problems and a few setbacks, but no worse than anyone else. We consistently kept the car in the top four and out of trouble. It was definitely tiring and I was pleased with our run that far, but we were only halfway through the race!

In addition to eating, hydrating, and getting massages between stints, we also slept in a hyperbaric chamber. It’s actually a pressurized tube that gets pure oxygen pumped into it. It blocked out most of the noise from the race cars and we had a pillow in there to make it easier for us to fall asleep. We didn’t use them much longer than 30 to 45 minutes, however. I napped for a bit, ate some food, and cleaned up.

My family went back to the hotel to sleep. It’s no fun for them to sit there all night long when we’re just coming in and out of the pits. It would be distracting for the drivers, too, so it was a win-win situation for everybody. I’m usually ornery when I get out of the car, anyway. But I love having them at races and I’m glad they were back to watch the finish.

I was pretty tired after my last stint, but I felt a lot better after eating and resting. Our team’s drivers all did double-stints through the whole race, which made for long drives, but also long rest periods.

I was scheduled to close out the race with a double-stint, and was really looking forward to pushing hard. Our team’s two race cars were running in third and fourth place all the way up until about 10:00 AM. I’m not exactly sure what happened to our #5 car on track, but it was towed in. Shortly after, I learned that it lost its clutch sometime during the night. We lost three laps and went from fourth place to 10th before we were back on track. Once moving, the car didn’t need the clutch, but it was impossible to drive out of pit lane without being pushed! This cost us several seconds at every pit stop.

Despite our problems, I went out there for my last stint around 1:40 PM and pushed hard to see if we could make up another position or two. It was the final stint and our last chance to try and get some points out of the race.

The race ended at 3:30 PM, and the final portion of the race was really tough. We just had a lot of little problems that got us in the end. Without a clutch, we had to come into pit lane, pop the transmission into neutral, and then shut the motor off while the crew completed the pit stop. To get out of the pits, we had to put it in gear and give the race car a push-start while hitting the starter button… It was a pain in the butt and we lost a lot of time because of it. The car also had a fueling issue during the last hour. The plunger in the receiving end of the car’s fuel system got stuck open and fuel was sprayed onto the left sidepod and caught fire. I had to jump out of the car, so we lost more laps there.

Besides those issues, the car was running great and it was quick. Our lap times matched the race leaders’, but we fell behind once the problems started. I finished the race and we received points for our ninth-place finish.

It was a tough and disappointing race because we had a fast car — at least as fast as our teammates’ #9 car, which finished on the podium. Barring problems, I think we could have made the podium in our car. But, as hard as it is to swallow, that’s racing.

Both Action Express cars ran in the top three positions for 75 percent of the race. We had a great run and it’s really a testament to the team and what it has put together. Our performance displayed the caliber of the team and we’re pretty happy about what we’ve got coming for the season.

In the meantime, we celebrated my wife’s birthday the evening after the race ended, before I headed to Sebring for the week to coach several guys who are competing in the IMSA GT3 Cup Challenge. Their event preceded the Sebring winter test for the American Le Mans Series. I was there with Flying Lizard Motorsports, testing and getting ready for the 12 Hours of Sebring in March. Basically, I didn’t get a break until the 11th of February … and I wouldn’t want it any other way.