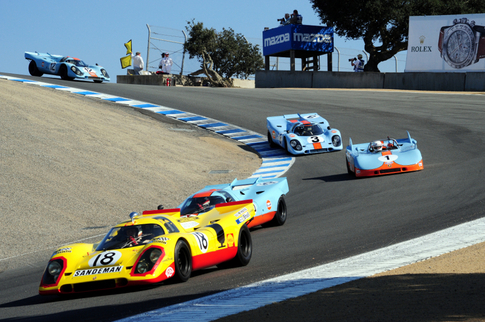 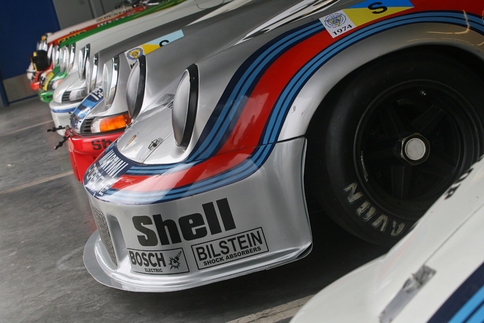 The first Rennsport Reunion was in 2001 at Lime Rock Park in Connecticut with the next two following in 2004 and 2007 at Daytona International Speedway in Florida. As with past Reunions, this one will highlight many famous Porsche race cars and drivers from all eras in Porsche’s motorsports history.

Expect hotel rooms in and around Monterey to fill up quickly, as the vintage racing at Laguna Seca will take place alongside Sunday’s 2011 Porsche Race Car Classic concours just over the hill, at the Quail Lodge in Carmel Valley.

Sponsored by Porsche Cars North America, Rennsport Reunion IV brings together an unprecedented number of significant Porsche vintage and current race cars, as well those who have driven them to victory in the world’s most famous sports car races. The three-day program of on-track competition is complemented by a concours d’elegance and special activities celebrating the decades-long history of the legendary 911 race cars.

After the highly successful staging of three venues in the East, held every three years – with the first one held in Lime Rock in 2001 – Rennsport Reunion IV is moving west, tapping a vast array of car aficionados and Porsche enthusiasts.

“While the Rennsport name has become a staple fixture for international collectors and racers over the past ten years, choosing the Monterey Peninsula will open up this one-of-a-kind gathering to the many Porsche fans in California and beyond who were previously unable to attend,” said Detlev von Platen, President and Chief Executive Officer of Porsche Cars North America. “Now they’ll have the opportunity to see, feel and hear from up close hundreds of famous Porsche race cars and dozens of their drivers from past and present during a truly memorable weekend dedicated to Porsche’s motorsport heritage."

Porsche Rennsport Reunion IV will assemble the wide variety of Porsche’s most historic racing models from the nimble 550 Spyder of the mid-Fifties through the mighty 917 and 956/962 of the Seventies and Eighties to the highly successful GT3 RSR. Special tribute will be paid to the numerous racing versions of the Porsche 911 and their countless victories on the dawn of what will become another milestone of this iconic sports car.

“This will truly be a rare gathering of significant Porsche race cars on the West Coast,” commented Gill Campbell, CEO/general manager of Mazda Raceway Laguna Seca. “Porsche has a long racing tradition in Monterey and we look forward to celebrating its heritage in a befitting manner for everyone to enjoy.”

Additional details of the Porsche Rennsport Reunion IV will be published as they become available. Ticket information is available by contacting 800-327-7322 or online at www.mazdaraceway.com.

For more information on the Porsche Race Car Classic or to purchase tickets visit www.porscheracecarclassic.com.

Porsche and Mazda Raceway Laguna Seca are working in association with the Porsche Race Car Classic to combine efforts to raise awareness for the Bonnie J. Addario Lung Cancer Foundation and the UCSF Thoracic Oncology Program.