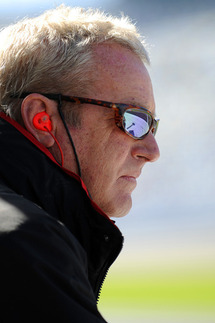 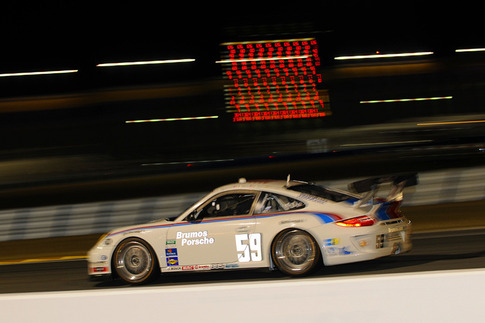 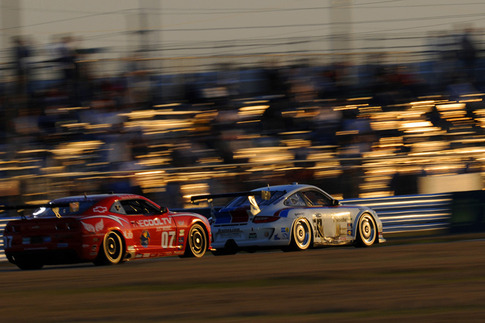 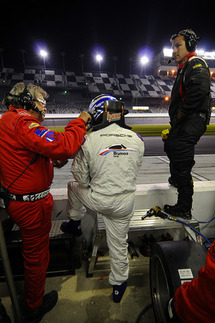 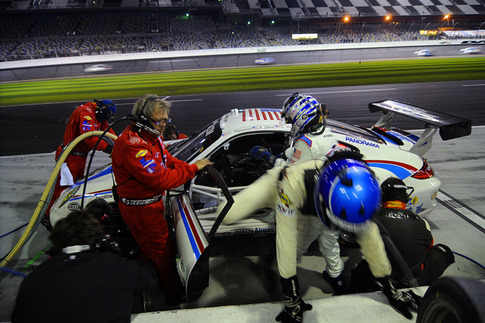 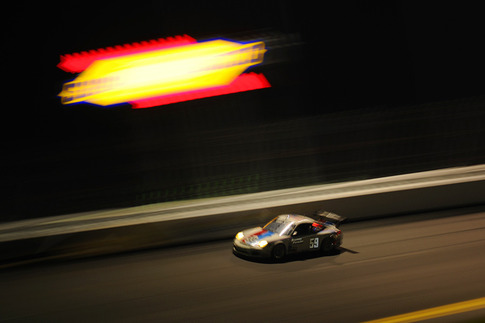 Hurley Haywood kept Brumos Racing at the front of the GT field during his first stint. 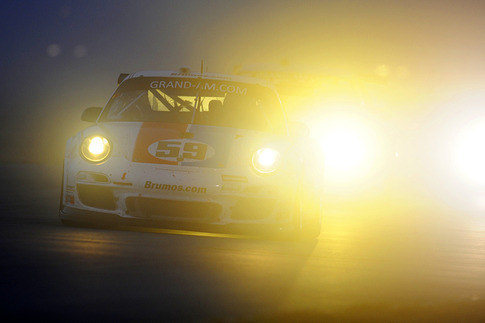 Daybreak brought fog to Daytona. The late night hours had not been kind to #59. 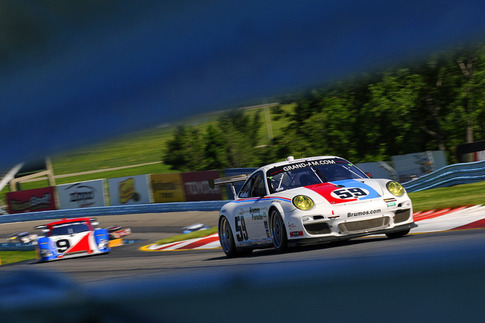 During practice for the Six Hours of The Glen, #59 climbed The Esses (Turn 2 grandstand, barely visible in background). 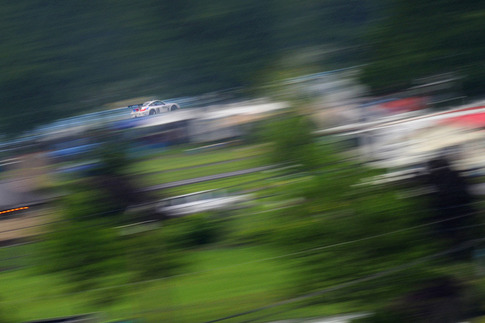 On a drying track, #59 negotiated The Esses during the race's second hour. 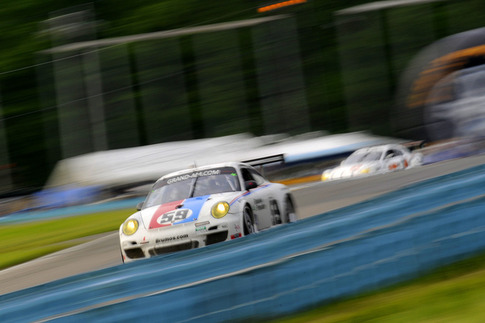 Andrew Davis cemented Brumos Racing in the top three during his second stint. 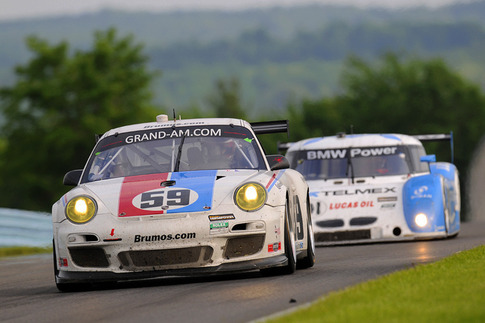 Leh Keen took the wheel for the final dash to the finish at Watkins Glen. 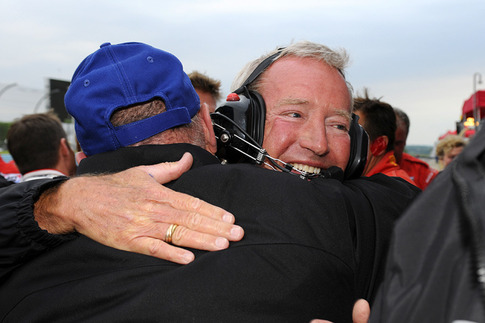 Hurley Haywood celebrated after Brumos Racing's victory at the 2011 Six Hours of The Glen. 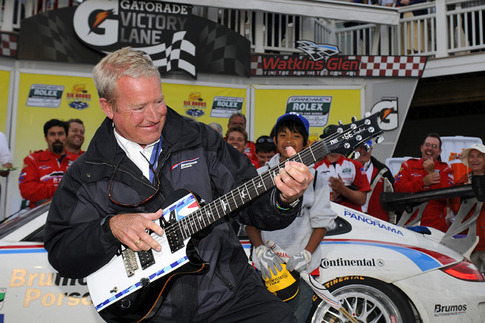 The Grand-Am winner's "trophy" was strummed by Hurley Haywood on the podium. 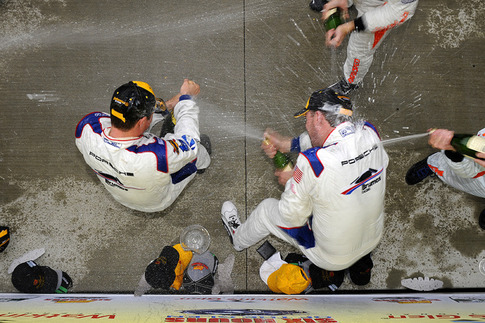 Hurley Haywood and Peter Gregg enjoyed a Six Hours class victory in 1974. Andrew Davis and Leh Keen enjoyed theirs in 2011.

It was July 13, 1974, and we were visiting Mom’s family in Albany, New York. Dad woke me up early that morning and told me we were driving somewhere. I had no idea where we were going, but it didn’t really matter. It was just me and Dad and an adventure; that’s all I really needed to know.

That afternoon, we sat in the grandstand just below The Esses at Watkins Glen, watching the Six Hours. A Matra-Simca, driven by Jean-Pierre Jarier and Jean-Pierre Beltoise, won the race. But, I was taken by the Porsches — the crazy flared fenders of the 911 RSRs, the jangly blat of the air-cooled, three-liter flat sixes. Hurley Haywood and Peter Gregg guided the Brumos Porsche to third overall that day, first in the Trans-Am class. That was my introduction to endurance racing — a six-year-old kid sitting in the grandstand with Dad, cheering for the white car with stripes in red and blue.

On the Friday after 2011’s pre-season Grand-Am test at Daytona, I received a call from Dan Davis, Chairman of Brumos. At the end of a brief conversation about some photographs I took the previous weekend, he asked if I might be interested in being Brumos Racing’s photographer for the team’s return to GT racing in 2011. “Yes sir, Mr. Davis, I think that might be a pretty good idea,” I stammered. “Call me ‘Dan,’” he replied.

During the Rolex 24 at Daytona later that month, Hurley Haywood stepped over the pit wall and climbed behind the wheel for a late-night stint. He took Brumos Racing’s brand new 911 GT3 Cup — with the now-iconic paint scheme — back onto the track in first place in the GT class. And there I was, shooting that pit stop. When his stint was over, he returned the car to pit lane first in class, some 37 years from when Dad and I sat in the stands and first witnessed him turn a wheel on a racetrack. If not for some debris on the Daytona banking later in the night… Oh well, fifth place after radiator repairs was a fine result, if not quite the stuff of storybooks.

On a Friday in early June, I stood at the top of The Esses for the first practice of this year’s Six Hours. Every year, when I return to Watkins Glen, I stare at that grandstand, trying to pick out the spot where Dad and I sat in 1974. Catharsis. The next day, the Brumos crew handed a fast race car to Andrew Davis and Leh Keen, and the two picked their way steadily through the GT field. After six hours that saw rain, a drying track, and finally sunshine, Leh took the checkered flag first in class. Hurley sat on the team’s pit cart, letting the newest generation of Brumos drivers handle the driving chores. My camera managed to find him when it mattered most, though.

Five days after Brumos Racing clinched the 2011 Grand-Am GT crown, I belted myself into a passenger seat which was affixed to the #59 Porsche 911 GT3 Cup. In the driver’s seat was Hurley. He took me for a few laps in the championship car. Honestly, there are no words…

As a photographer and a journalist, I know I’m not supposed to be part of the story, but I’m honored to have been permitted the opportunity to add this chapter to my personal book. I can’t help but feel that I’ve come full circle. But mostly, I find myself thinking that Dad would have gotten a kick out of all this.