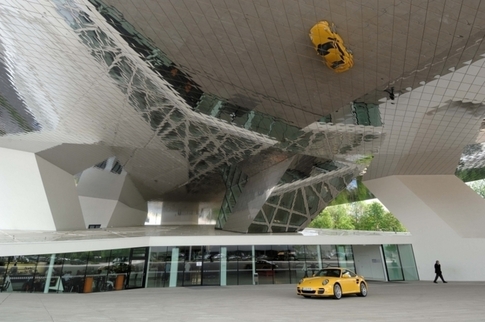 The Porsche Museum used more steel in its construction than the Eiffel Tower in Paris. Photo by Randy Leffingwell

STUTTGART — Our first interview was with Peter Falk, a tall, slender Patrician gentleman who is soft-spoken but very quick to smile. He started at Porsche in 1959 and — get this — his first assignment was to install air conditioning into a 356. It was only experimental and he told us it was a nightmare — a small car with a tiny engine compartment that suddenly needed so much more plumbing. It had nothing to do with racing but I like to find out the very first assignments of everyone I talk to. Sometimes the surprises are startling. Like AC in a 356.

More to the point of racing, Falk was a participant in one of the most fascinating races against time that Porsche ever staged, a monumental record run staged at Monza race circuit, using the Number 001 911R. I’ve spent time digging into this event in the past but today Falk cleared up a few more lingering mysteries. And then he went on to talk about his development work on 911 rally cars, the 904, 906, 910, 907, 908, 909, and 917 racers. He gave us a fascinating litany of out-of-the-box successes and a few dazzling failures that went on to capture world championships.

Our second subject was Ed Peter who spent two decades helping American dealers get the cars they needed to sell. He explained the structure that put Porsches in Audi sales rooms and put Porsche + Audi logos on the 1971 and 1972 Can-Am cars. Full of stories of working with Penske on Can-Am racers, as well as representing Porsche at hundreds of other races, he explained a number of the mysteries that cloud Porsche’s unsatisfying efforts in CART and Indy Car racing. As enjoyable, he brought along two DVDs of images. Ed Peter was a talented photographer who chronicled all of the races he attended, shooting thousands of previously unpublished photos.

The afternoon ended with Valentin Schäffer. Porsche has an ability to attract exceptional talents and keep them a long time. Schäffer started in 1956 and worked only in the motorsports department. A compact man with an extremely expressive face, he was sent by his boss in the late 1960s to a local company that produced turbochargers for trucks and tractors. He was to buy some samples to begin the development experiments. But his boss insisted on secrecy: Schäffer could not identify his employer or even what the turbochargers were going to be used for. Finally, the group of engineers around the table asked him, “Well, can you tell us how much horsepower you hope to produce?”

Schäffer grinned at them. At last there was a question he could answer: “More than 1,000,” he answered.

STUTTGART — Klaus Bischof joined Porsche in 1968 as a mechanic and now is the Manager of Museum Automobiles. He runs the historic collection and takes museum cars to events and locales as distant as Doha, Qatar in February, Moscow in March, Shanghai last month, Italy for the retro Mille Miglia races, and, of course, to Rennsport Reunion at Laguna Seca and the Porsche gathering at Quail Lodge later this year in mid-October.

A regular participant in most of the world’s greatest historic events, Klaus sports a watch on each wrist, each of them large chronometers that commemorate events we all dream about running. Now 63 years old, he grew up in a village just four kilometers from Stuttgart. When he was six and seven, he could hear factory mechanics and drivers such as Herbert Linge running the 550 Spyders up and down the uncompleted autobahn that ended at a tunnel near Heilbronn. He and his friends would run from their homes to the autobahn overpass and they’d see the 550s coming up the hill at them, pass under them, speed toward the tunnel, brake hard, pull across the median, and rocket back down the hill toward Zuffenhausen. He told us those days changed his life; he dreamed that someday he would work on those cars.

Klaus was full of great stories including one about one of the 917s he cared for during 1971. The cars were losing their brakes and he asked racing director Rico Steinemann what he should tell the drivers when they came into the pits and complained. Rico gave him an answer and the next time Helmut Marko came in, Bischof passed on the boss’s advice: “If you want to win, don’t use the brakes.” Marko won, setting the fastest lap time and average speed of any 917 in competition ever.

Our second interview today was with a man Jerry and I met four years ago working on Porsche 60 Years. These days, Herbert Ampferer is Porsche’s Director for Environment and Energy and much of his time is spent dealing with issues of emissions and alternative fuels. But with the regulations for Le Mans for 2013 and 2014 encouraging partial- and full-hybrid race cars such as the Porsche 911 GT3 R Hybrid and the Type 918 RSR, the future is anything but dull. In fact, Ampferer is confident Porsche will continue to race, that it will continue to hold its unique place within the larger Volkswagen family, and he offered us some insights into what is the racing direction the company is taking now and in the future.

That’s for the book, not for this.

Following Ampferer for nearly two hours, we prowled the museum. It is really a fascinating place, and even on a Friday the building had a good crowd.