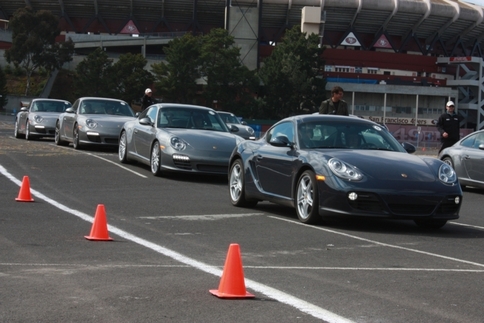 The Porsche World Roadshow--USA set up a small "track" and autocross course in the parking lot of San Francisco's Candlestick Park. Photo by Damon Lowney 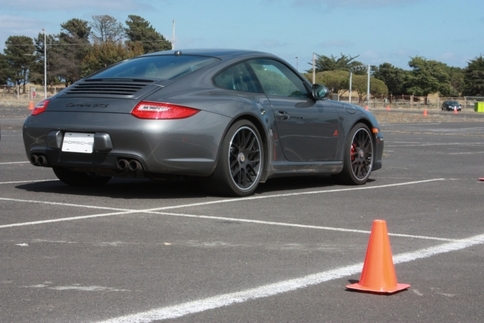 The "track" and autocross courses are lined with chalk and cones. Photo by Damon Lowney 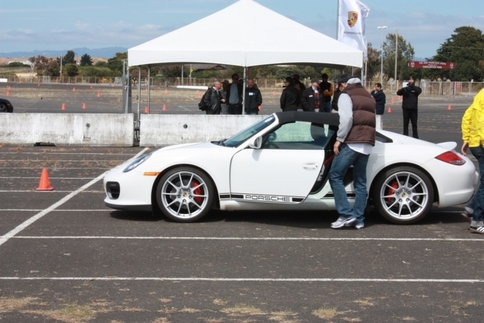 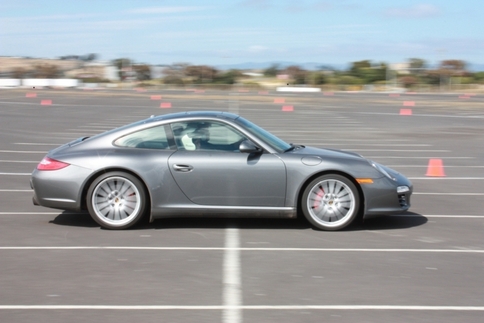 A Carrera 4S makes its way onto the provisional track. Photo by Damon Lowney 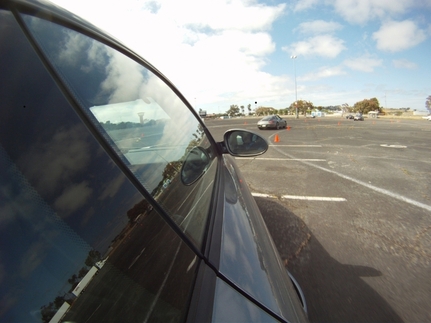 Following Carreras in a Carrera. Photo by Damon Lowney 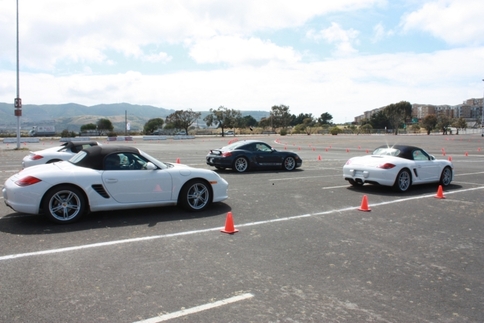 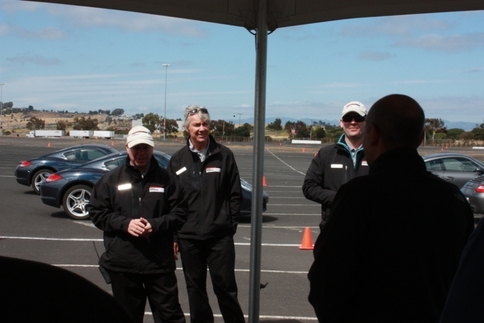 Porsche Sport Driving School instructors brief participants before they drive the 911s (and a couple Caymans). Former Porsche factory driver Kees Nierop (center) was there to help, as well. Photo by Damon Lowney 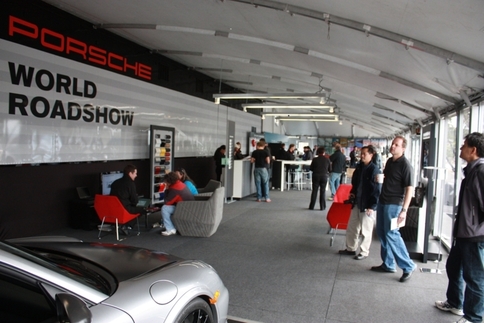 On display in the roadshow's tent were a GT2 RS, an interactive kiosk featuring a PCCB brake rotor and a regular cast iron unit, and some televisions playing Porsche commercials. Photo by Damon Lowney 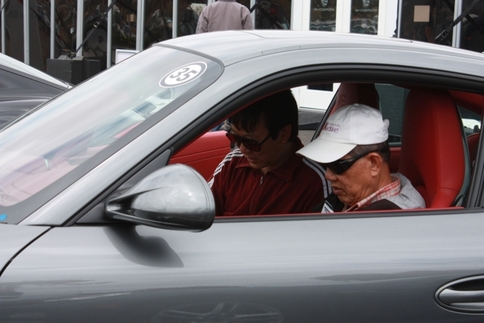 Event participants are welcome to explore the cars on display. Photo by Damon Lowney 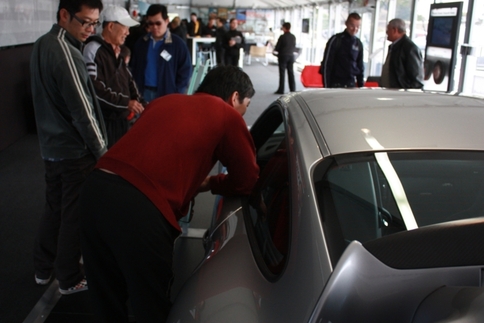 A group of people checks out a GT2 RS. Photo by Damon Lowney 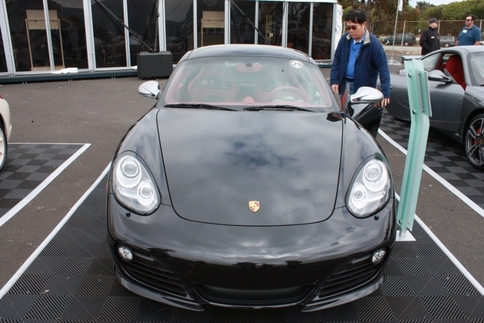 PCNA brough a couple Cayman Rs to Candlestick Park -- one to look at, one to drive. Here a man opens the door for a close inspection of the lightweight Porsche. Photo by Damon Lowney 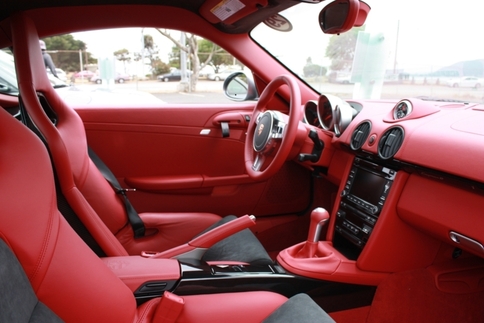 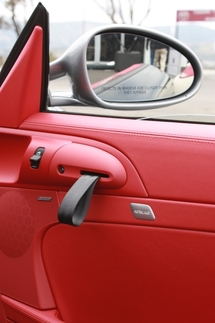 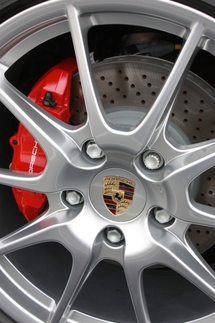 Excellence was invited to and attended the Porsche World Roadshow—USA event in San Francisco yesterday, the fourth of seven such events where potential customers are given the keys to drive several models in the automaker’s sports car lineup.

We were there as media guests, but most of the participants appeared to be current Porsche owners or prospective customers. Most of the cars in the parking lot were late-model Porsches, but there were also a few older Porsches, including a delectable silver early 911 Targa and two 993s with ducktail spoilers. A Nissan GT-R and a few other competitive brands were parked up, as well. That PCNA is reaching out to prospects was clear even before the event, as one of our editors received an invitation in his personal e-mail box two years after signing up on the Panamera informational e-mail list, one that would have allowed him and a guest to participate as potential customers. After the driver briefing, participants who weren’t busy on the autocross or “track” set up in the parking lot could take street test drives or spend time in the tent with Sascha Glaeser, an “Exclusive consultant” who acts as a personal shopper for those who want to explore the outer possibilities of Porsche’s list of new-car options.

Participants at the show during our visit were a diverse group of people: men, women, couples young and old, father and son pairs – the event is open to practically anybody. If you’ve never driven a Porsche, here’s your chance, and if you’re familiar with the cars, it’s a good opportunity to compare new models side by side, and even drive some brand new ones. In addition to driving for a couple laps in a Boxster Spyder on the short autocross course, we also briefly drove a new Cayman R and a base Boxster before walking 50 yards over to the larger “track.” Once there we were treated to several different 911s spanning most of the model’s range and two Caymans, a few of which we drive on a crumbling, bumpy section of Candlestick’s parking lot.

Below is a video of our opening lap around the track in a Cayman. We were following the instructor-driven lead car:

We rode with some of the participants, including Bob, a quiet 78-year-old from the East Bay who started out in a 1971 911T. These days, he drives a 2009 Cayman “Rain or shine, it’s my only car,” says Bob with a smile. His Cayman has a manual transmission, but Bob is pondering a switch to PDK. His kids are telling him to stick with the manual transmission, but Bob has come to Candlestick to do a little real-life research on the double-clutch, semi-automatic transmission – a good thing for him since every car here is equipped with it.

“I’ve never worn one of these before,” says Bob with a smile as he points to his helmet. Our mild concern over just what kind of a ride we’re about to have is only amplified when it’s time to get going.

Last in a line of five cars during the lead-follow exercise, Bob gets caught out when the leading 997 Turbo takes off. By the time he gets PDK into Drive, the group is quite a ways down the “track.” Bob seems a bit flustered, with the abrupt inputs of a track newbie. Just as we’re beginning to wonder about Bob’s credentials, he asks a question that changes everything: “So, are you a left-foot braker?” “Uh, no, actually…” is our response as we watch Bob settle into a rhythm, with simply beautiful left-foot brake inputs. He soon smoothens out his driving line, and while the aggression of a trackday regular isn’t there, it’s a pleasurable thing to be in the passenger seat as Bob points the 911 Carrera around the cones.

It was also interesting to hear Bob’s take on Porsche’s sports cars. As he folds his five-foot, seven-inch frame into a 911 and adjusts the seat, he says, “The seats in these cars don’t go high enough. I had to use shims in my Cayman.” Funny, we’re always trying to get the seats to go lower. “And I’ve never figured out the (trip) computer, but then I haven’t put much time into it,” he says with a grin — indicating where his priorities lie.

As he hits the gas and points the 911 Carrera 4S’s nose into the sea of orange pylons, Bob’s grin widens into a broad smile. It’s pretty clear why he’s been driven by six horizontally opposed cylinders for a very, very long time…

Visit the roadshow’s website for locations and dates, and to register for the event. The last day of the Candlestick Park event is May 13.