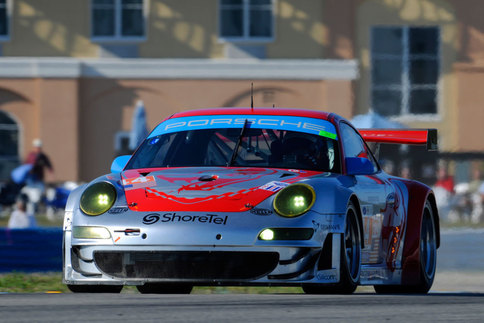 This year’s Petit Le Mans race should be electrifying with a lineup that includes the GT3 R Hybrid, Porsche’s newest “racing laboratory,.” It will compete alongside 44 other cars in the largest Petit Le Mans Race in years.

The race, which is scheduled to start at 11:15 AM, will be televised on SPEED TV starting at 11:00 AM eastern time, 8:00 AM Pacific. Radio coverage starts at 10:00 AM. Fans can also visit www.americanlemans.com for radio coverage as well as live timing and scoring and press notes for all on-track sessions. For those with satellite radio, tune in to Sirius channel 127 or XM channel 242.

Fans of the Flying Lizard Motorsport team have much to look forward to. Drivers of the #45 Porsche GT3 RSR, Joerg Bergmeister and Patrick Long, are 22 points ahead of their nearest competitor, Risi Competizione’s Gianmaria Bruni, in the drivers’ championship.

Even so, “… with 30 points for the winner, anything could happen. Still, we’ll be doing everything to bring home as many points as possible and to also secure the manufacturer title for Porsche and team title for Flying Lizard Motorsports,” Joerg Bergmeister says. Bergmeister has a history of doing well at Road Atlanta, evident from his back-to-back victories at the track between 2003 and 2007.

Wolf Henzler, who has driven for Team Falken Tires in its GT3 RSR this year, will not be competing due to a back injury for which he recently had surgery. His co-driver, Bryan Sellers will still race the #17 RSR with former Porsche-Junior driver Martin Ragginger, but there will be no third driver to replace Henzler.