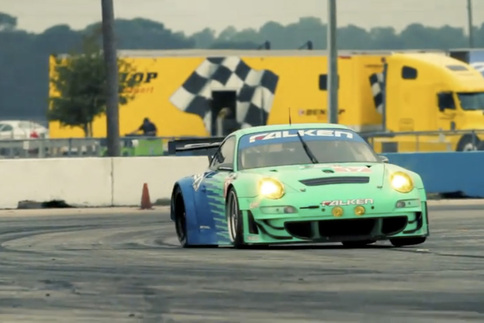 What’s Team Falken Tire been up to since the end of 2010’s American Le Mans Series season? Shaking things up with new team management and improving its tires’ wear characteristics.

In addition, Wolf Henzler is back in action for the 12 Hours of Sebring after missing the Petit Le Mans at Road Atlanta due to a back injury unrelated to motorsports. His teammates are Bryan Sellers, a Team Falken Tire mainstay, and 23-year-old Martin Ragginger, a Porsche Junior program graduate.

Team Falken Tire is using a Porsche 911 GT3 RSR for the season, car #17, and it’s competing in the GT class. Check out this spotter guide to see race entrants and their cars for the 12 Hours of Sebring race, which starts tomorrow at 10:30 AM eastern time. Watch it on ABC or follow coverage at the American Le Mans website.

The high definition video that follows was shot on February 9 and 10, 2011 during the Sebring Winter Test; set screen size to full.