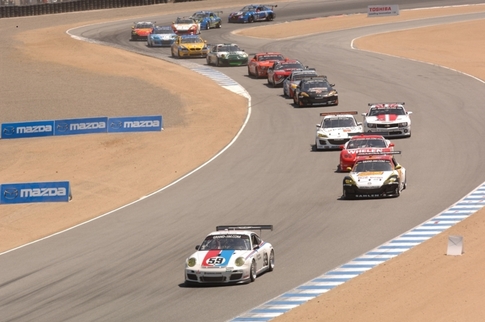 In a 16-car field, it's nice to be number one. The horde of 15 cars chased race leader Andrew Davis for the first 26 laps till the first round of pit stops mixed things up. Photo by Randy Leffingwell 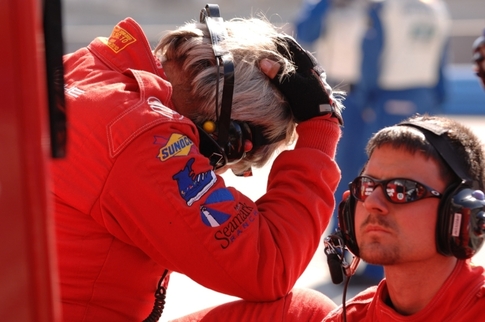 Pit crew have different ways of coping with questions of the car's and driver's ability to finish: Some follow the information, others turn away. Photo by Randy Leffingwell 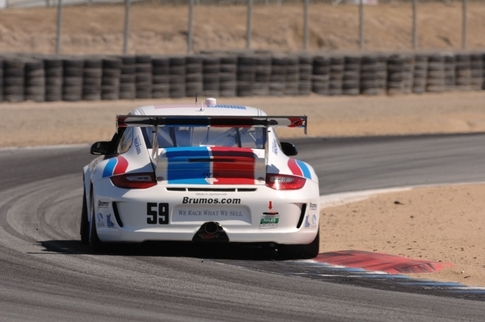 This was the view most other GT racers saw of the Brumos #59 Porsche. Drivers Leh Keen and Andrew Davis led the GT class for 47 of the 100 laps the GT cars completed. Photo by Randy Leffingwell 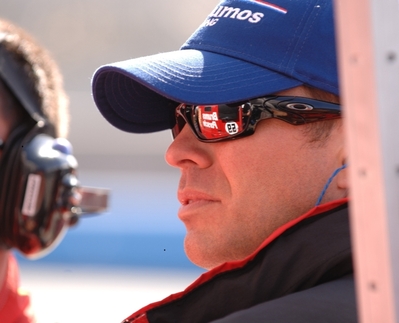 Brumos co-driver Andrew Davis stares intently at the race monitors, wondering if his partner Leh Keen has enough fuel in the car to finish the race in first place. Photo by Randy Leffingwell 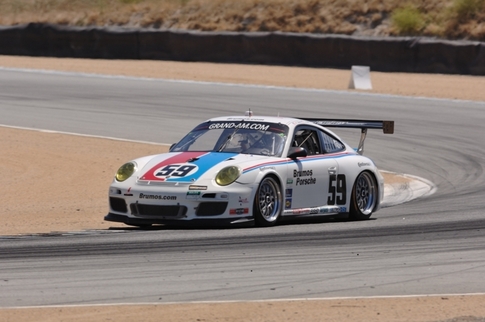 Alone and enjoying it. Opening driver Andrew Davis pulled out a steady lead and held it for the first 26 laps. Photo by Randy Leffingwell 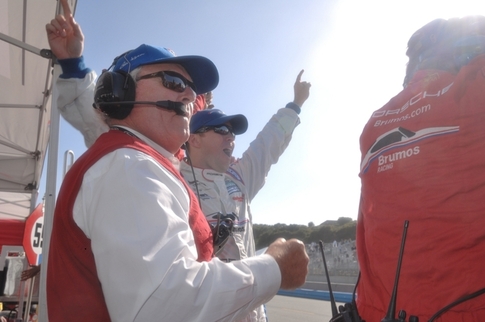 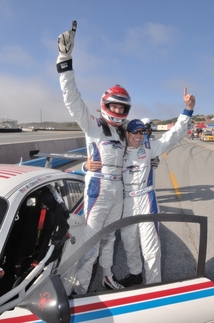 It was a tale of two sprint races. The Rolex Grand-Am series returned to Mazda Raceway Laguna Seca outside Monterey, California, after a year absence, and it brought with it the typical excitement that accompanies any endurance race interrupted by full-course yellows. For Brumos Racing’s #59 911 GT3 Cup car, this meant the difference between the Grand Touring class victory it earned and…what if?

The “what if” in this race was related to fuel consumption, and for Team Technical Director Joe LaJoie, team owner Dan Davis, and co-drivers Hurley Haywood and Andrew Davis in the pits, the question nagged at them each time fellow pilot Leh Keen flew past them during the final 20 minutes of the race. The race weekend thus far had been going well as Andrew had qualified the car on the GT pole with a 1:29.726 lap time.

The green flag fell at 2:35 PM. “To start out the race up front was great,” Andrew said. “I had a great wide-open view [as the faster Daytona Prototypes pulled away] and I loved what I saw in the mirrors too. The cars just got smaller.”

Following a full-course yellow at 3:12 PM to retrieve a car stuck in the run-off gravel, the pits opened at 3:19, 28 laps into the race. Andrew had led the first 26 laps before a pit stop for fuel and tires and to hand over the car to Leh Keen. When Keen returned to the circuit, car #59 had slipped to third, but within a lap, he had moved up to take second position from Mike Skeen in Camaro #07, behind GT leader Jonathan Bomarito in Mazda RX-8 #70.

Keen took the lead from Bomarito on lap 62 and held it for another round of Laguna Seca before a scheduled pit stop at 4:15 PM for fuel and tires. Again, an efficient crew cost him just two places and he returned to the race once again in third. And then the drama began. The interval from the start of the race to the first and then to the second fuel stops had been 40 minutes and 65 minutes. If all things were equal, with 60 minutes remaining in the race, there should be enough fuel.

“Fuel is always an issue,” Andrew explained later. “Especially since it’s been such a consideration in the last four races.” In mid-April, Grand-Am announced a change in fuel-cell regulations for Daytona Prototypes and Grand Touring classes, dropping capacities from 22 gallons to 18.5 for GT cars. (Rules reduced Mazda’s cells from 24 to 20 gallons.) Grand-Am expected this change would add a third pit stop to races running 2 hours 45 minutes, such as at Laguna. The change went into effect at the Virginia International Raceway Bosch Engineering 250 on May 14.

Then fate intervened. On race lap 87, one of the Daytona Prototypes, #23 Ford Riley, shredded a front tire and ripped bodywork off the car, littering the track. The race went to full-course yellow on lap 88. At this point, Brumos’ rival Jordan Taylor driving the #88 Camaro had the GT lead, running in 10th overall behind the DP cars. For seven laps, the GTs, which had been lapping the circuit at average speeds approaching 90 miles per hour, slowed to between 50 and 60 mile-per-hour averages. Faces in the Brumos pits relaxed, but only slightly.

The track went green on lap 95, starting what everyone anticipated to be a sprint to the finish. But one lap later, fate helped again. One of the GT class Mazdas went into the gravel at turn 5, bringing on the day’s third full-course yellow and again slowing the pace. The track went green at 5:08 PM on race lap 99, initiating a final 12-minute sprint race. Among the GTs, Keen was leading Jeff Segal’s Mazda by 1.067 seconds. Some of the faces in the Brumos pits were buried in their hands, others stared silently at the race monitors, and the rest screamed and waved their arms as Keen shot past. On race lap 102, he drove the car’s fastest lap of the day, 1:29.600 at 89.92 miles per hour.

At 5:20 PM, the checkered flag proved Brumos Team Technical Director Joe LaJoie was right. Thirty minutes earlier in a huddle in the pits, he told Dan Davis, Hurley Haywood, Andrew Davis, and the rest of the crew, “We have enough [fuel].” Keen had more than enough to pull out a 2.934-second victory over the second and third place Mazdas. Keen and Andrew had covered 100 laps compared to the Daytona Prototypes’ 107.

“I was worried about the Mazdas,” Keen said after the race. “I was in a Mazda sandwich for a while. Today, this weekend, the car seemed really good just straight out of the box. First practice was good, second was better, qualifying was really good, and the race, well, the race was great.”

“It’s difficult to balance these cars out at the start of the season,” Andrew explained. “We’ve worked hard since the beginning to dial in the cars and the Continental tires. But we feel like we’ve got it now.” Keen and Andrew gave Brumos its second GT win of the season, extending their points lead to 10. This was the eighth race of a 12-event series. The teams meet next on July 22-24, at the American Red Cross 250 at New Jersey Motorsports Park, Millville, NJ.