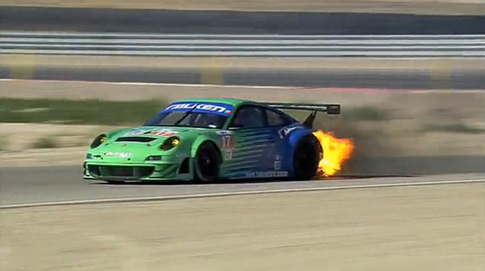 Sellers said smoke in the cockpit tipped him off to the fire. Photo YouTube 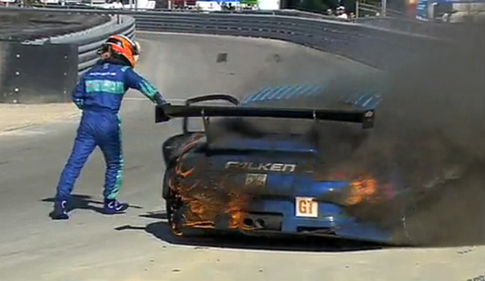 Sellers jumps out of the #17 Falken GT3 RSR. Photo YouTube 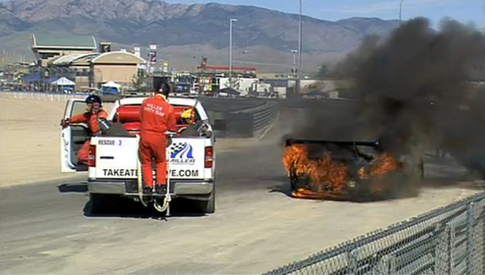 This same car (with a rebuilt rear end) placed ninth in the GT class on Sunday.

After the hose breaks, the fire crew resorts to fire extinguishers. Photo YouTube 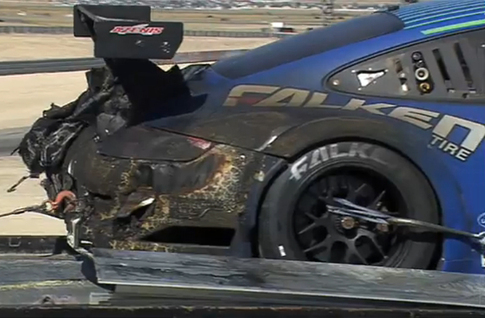 Team Falken’s GT3 RSR sat burning on Saturday, July 10 for at least 50 seconds after it caught fire during the fourth lap of practice at Miller Motorsports Park.

We’re impressed by Team Falken’s ability to get the car back together in time for the race – they would go on to finish ninth in GT – but they certainly had their work cut out for them. Extensive damage was done to the car while it sat burning, waiting for emergency crews to arrive and then it burned some more as the crew’s hose faltered and it had to depend on fire extinguishers.

But don’t take our word for it, count the seconds from the moment Sellers parks the car to when the emergency crew put out the fire (keeping in mind the video was trimmed; it took even longer).

“We started at the back of the pack, and had to use the race itself for the set-up work we would usually do on practice and qualifying days. We made two adjustments to the car during Bryan’s stint, and then another one during my stint, and that took us from two seconds slower than our competition to less than one second behind, but in this class, that ruins your chances for a podium finish. The Falken Tires crew, with help from Porsche Motorsport North America engineers, really came together to make this finish possible,” said Wolf Henzler.

The #45 was leading when Joerg Bergmeister suffered a tire puncture during his stint, but the GT3 RSR suffered another puncture during Patrick Long’s stint, 45 minutes before the end of the race. It finished fifth, despite the punctures. The #44 Flying Lizard car driven by Darren Law and Seth Neiman finished 11th.

“Our car was quick today, and we didn’t have the fastest car in class all weekend, but we were still in line for a podium finish if it hadn’t been for our two tire punctures – one during my stint and one during Patrick’s session. Our crew did a great job keeping us in contention, and the points are so close that a position or two improvement at the next race will bring us back into the lead – and there are five races to go,” said Bergmeister.

BMW is now in first place for the GT manufacturers championship, with Ferrari second and Porsche in third, three points behind BMW.