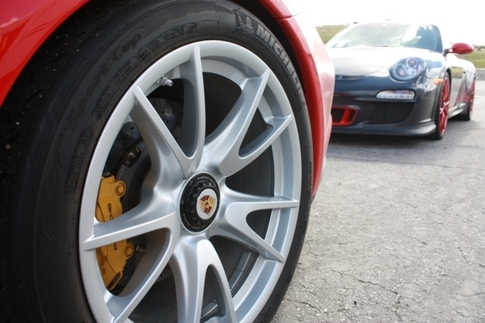 Porsche is recalling hundreds of 2010 model year 911 GT3s due to faulty rear wheel hubs that “may be prone to failure under certain driving conditions,” according to an announcement posted on the National Highway Traffic Safety Administration’s website. The announcement also suggests that the original rear wheel hub maintenance schedule “may be insufficient to prevent wheel hub failure.”

And if a hub fails? Well, it wouldn’t be pretty — likely resulting in a loss of vehicle control.

455 model year 2010 GT3s, built from May 15, 2009 through February 11, 2010, are affected by the recall. To rectify the situation, Porsche is notifying owners of the recall, having dealers replace the hubs free of charge, and revising the rear hubs’ maintenance schedule, though the announcement doesn’t say if the replacement hubs are of an improved design.

In June Porsche recalled 1,702 911s equipped with centerlock wheels due to a design flaw with the locking mechanism that could cause the hubs to wear prematurely. No connection between these recalls has been mentioned.

If you are an owner of a 2010 GT3 affected by this recall, be sure to have a dealership perform the recall updates.