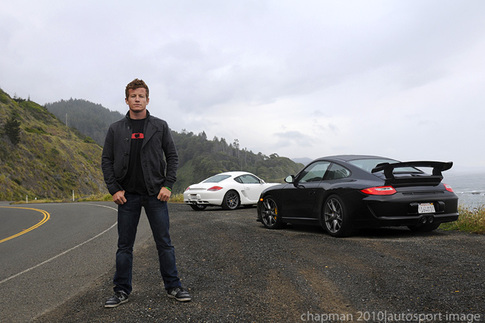 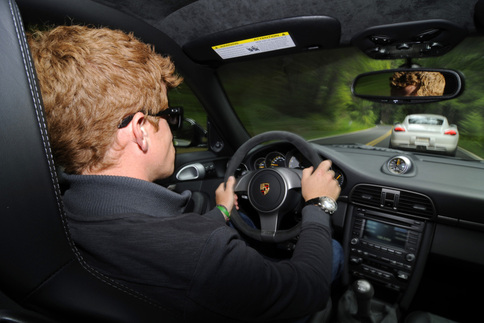 Patrick Long chases the Cayman from the snug sport bucket seat of the GT3. Photo by Bob Chapman/Autosportimage.com 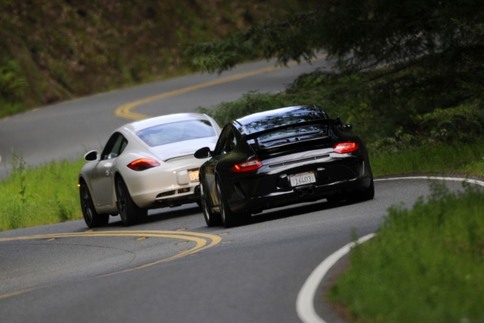 Driving paradise? We think so... Photo by Bob Chapman/Autosportimage.com 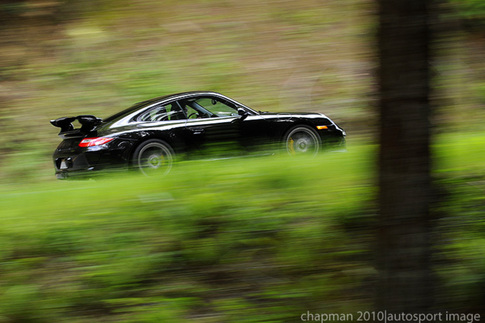 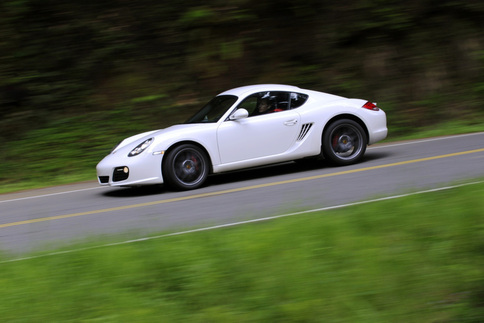 Long bends the Cayman into a corner. The Michelin Pilot Sport Cups gave the car monster grip along the loop. Photo by Bob Chapman/Autosportimage.com 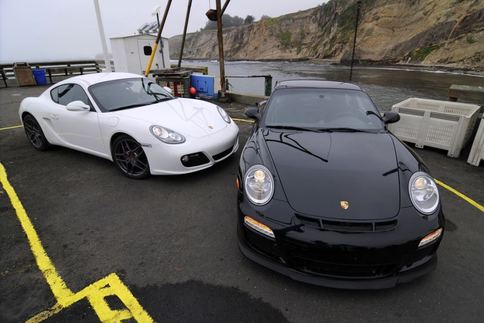 Wouldn't you know it: the dock master once worked for Porsche AG in Zuffenhausen. Photo by Bob Chapman/Autosportimage.com 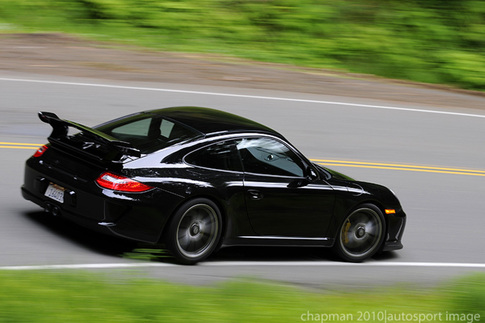 Predictably, the GT3 proved superior out of turns thanks to its rear-engined traction. Photo by Bob Chapman/Autosportimage.com 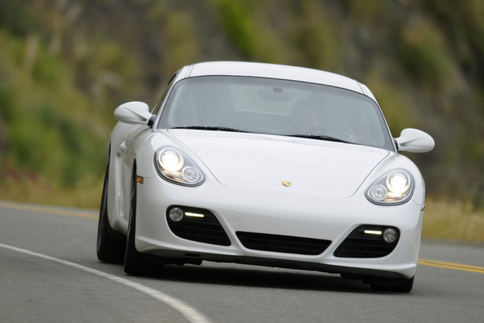 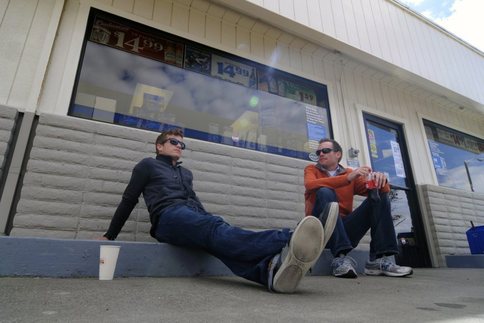 Patrick Long and Pete Stout discuss the handling dynamics of both cars at one of the North Coast's all-too-rare gas stations. Photo by Bob Chapman/Autosportimage.com 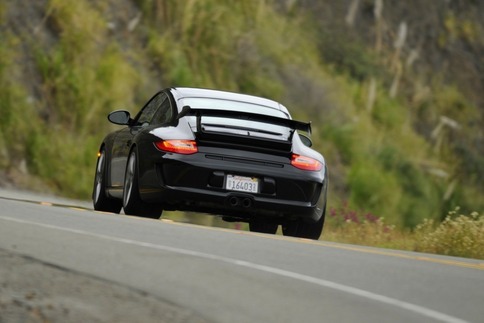 Wide rear tires of the 997-2 GT3 came in handy when deploying its 435-bhp from 3.8 liters. Photo by Bob Chapman/Autosportimage.com 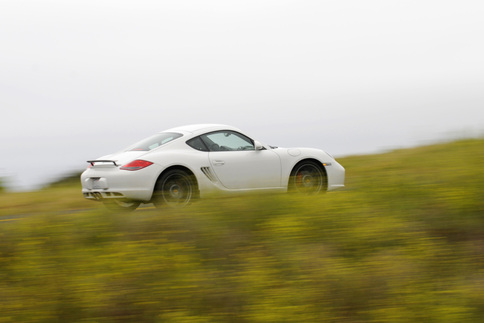 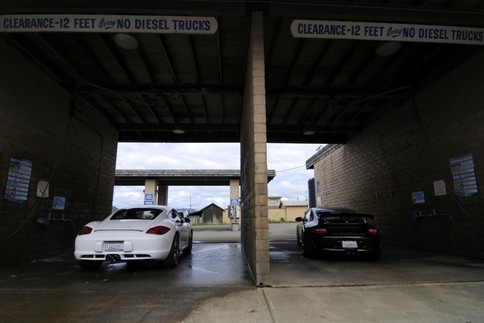 The Cayman and GT3 stopped for only five things: Gas, food, sleep, photos, and car washes. Photo by Bob Chapman/Autosportimage.com 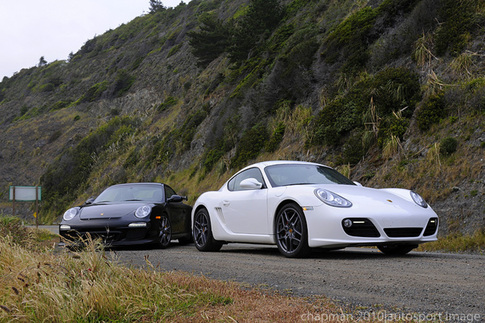 Mid-engined vs. rear-engined, PDK vs. six-speed manual, iron-rotor brakes vs. PCCBs, new 9A1 flat six vs. GT1-case flat six...there's a lot to sort through here, and Patrick Long proved immensely helpful in doing just that. Photo by Bob Chapman/Autosporti

Editor’s note: When factory driver and American Le Mans Series champion Patrick Long asked how Excellence road tests Porsches, we invited him to come find out for himself. He took us up on the offer, and what follows is an excerpt from the story of a two-day test with Patrick on our “Secret Test Loop” in Northern California. You can find the rest of author Jared Cullop’s story in our December, 2010 issue on newsstands starting October 6. In the meantime, we hope you’ll enjoy some of the extra photos from what proved to be an amazing journey.

Patrick takes off in the Cayman S and I’m determined to stay in touch, but it’s clear that won’t be happening. Surely you’ll forgive me a moment’s delusion. My daydreams must have got the best of me on the drive up 101 North, and I haven’t flogged a 911 in a while (having sold mine)…

A hard run through the GT3’s gears is humbling. I just can’t get comfortable with Patrick’s pace, so I fall back, let him get totally out of sight, and get used to it. A little later, we pull over to compare notes. Patrick is already into the loop. “This place is ree-diculous,” he says. “It’s like going on a computer and designing a test loop, then dropping in scenic backgrounds. It’s something I didn’t think existed.” Not surprisingly, he’s pretty into the GT3, too. “The GT3 turns in far more aggressively than the Cayman,” he says. “It’s better coming off the turns, too, with all that traction thanks to its rear-mounted motor. But the Cayman is better through the turns, so you have to reset yourself as you move from car to car. A lot of guys don’t like that, but I find it makes things interesting.”

Patrick wants the GT3 back, and I decide to ride with him. Now I don’t know how to make this point without sounding silly and obvious, but I realize something after a few turns: Patrick is a race-car driver! I’m mesmerized by his driving, by his ability to pick the perfect spot to start slowing the car, time after time, and how he transfers its weight to the outside tires through a bend. His knowledge of braking distances and grip exists on a different plane. He misreads my silence as me being scared to death.

“You okay, bro?” he asks. “Oh yeah,” I say quietly. “I’m very okay. I’m trying to warp my subconscious into some kind of sponge. That’s all.” It’s true. If I stop to think about the actual mechanics of his driving, I’ll miss more than I retain. So, silly as it sounds, I try to zone in on what he’s doing, which is about ten things a second. Or maybe a hundred things a second. I’m not sure…