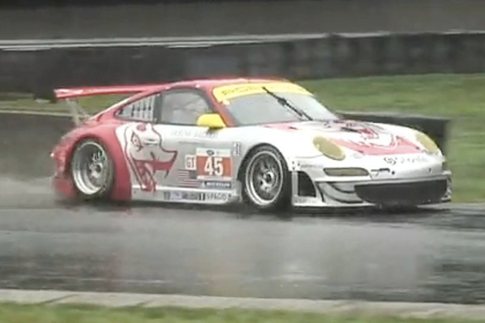 Friday qualifying was rain-soaked, while Saturday's race was dry. Patrick Long qualified his #45 GT3 RSR on the pole. Photo: YouTube 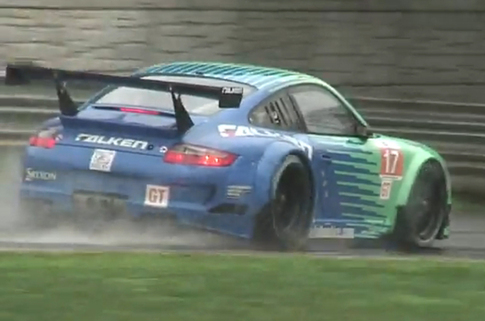 After a rainy qualifying session at Lime Rock Park, Porsches beat all challengers in the LMP and GT classes during a dry-weather race. Porsche now leads the GT class in both driver and manufacturer points.

The LMP class Muscle Milk Porsche RS Spyder driven by Klaus Graf and Greg Pickett took the overall win, beating the David Brabham and Simon Pagenaud Honda Performance Development prototype by almost 28 seconds. This marked the first time a customer team has taken the RS Spyder to an overall win in North America. The Muscle Milk team is now second in manufacturer points in the LMP class. Graf is second in driver points, while Pickett is third from having missed a race.

With four minutes left in the race, the Graf driven RS Spyder lead the Brabham driven HPD by only half a second. The two touched and both ended up in the pits. Graf received a stop-and-go penalty for blocking, but was out of the pits more quickly than Brabham, whose car received a flat tire during the contact.

Said Graf: “I was forced to the edge of the track — I did not even know Brabham was there. I didn’t mean to block him, but I understand the officials have to call what they see.”

He credited the win to having relatively fresh tires at the end of the race: “We didn’t take tires near the end at Salt Lake City, and we decided to give ourselves better grip here late,” Graf said.

The Flying Lizard Motorsports’ #45 GT3 RSR driven by Joerg Bergmeister and Patrick Long have once again taken the the lead in both driver and manufacturer points. This is quite a turnaround after a less-than-stellar fifth-place showing last race at Utah’s Miller Motorsports Park.

Long and Bergmeister now have 93 driver points, placing them firmly ahead of the now second place team of Bill Auberlen and Tommy Milner driving the #92 BMW M3; they have 79 points. Gianmaria Bruni and Jaime Melo — driving the #62 Risi Ferrari F430 GTC — have dropped to third with 75 points after completing only 21 laps at Lime Rock.

“I thought nothing could top our dramatic win at Laguna Seca in May, but I am the first to admit I am wrong,” Flying Lizard driver Patrick Long said. “We had to push 100 percent to the last lap to beat the BMWs, and Pierre Kaffer was not far behind in the Ferrari. While the Melo/Bruni Ferrari is our closest rival, relaxing when they dropped out early would have been a mistake, as we could have ended up fourth or fifth.” He continued, saying the Flying Lizard pit strategy was key in the win.

Bergmeister agrees: “With our extra pit stop on the early yellow, we had a bit more fuel at the end, and the stop did not cost us track position.”

Although he claims it’s not his track of choice, Bergmeister has now won the GT class five years in a row at Lime Rock. “When someone asked me what it has taken for me to win five races in a row here at Lime Rock, I thought a bit and realized it comes down to one word: patience. The track is so short and there are four classes of cars running together, so you have to pick your spots both to pass and to move over for faster cars,” he said.

The BMWs were faster on the straights, Bergmeister said, but the straights are short at Lime Rock, which suits the RSR better.