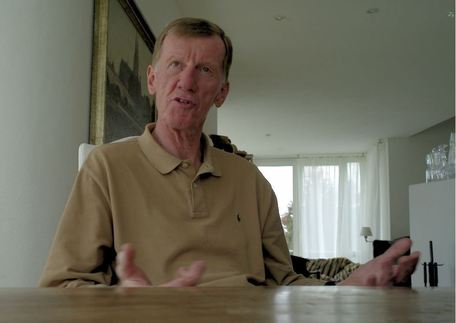 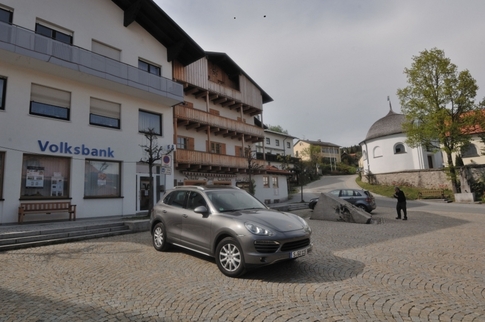 Here's our trusty Cayenne. It's the V6 version equipped with an eight-speed Tiptronic S transmission. We put in gasoline here in Sant Englmar and paid $9.75 per gallon. Photo by Randy Leffingwell 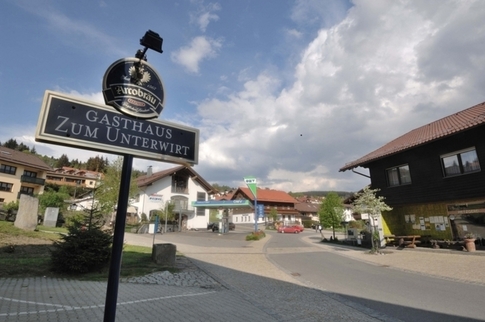 Sant Englmar is in the Bavarian Alps. Walter Röhrl is an avid skier and mountain biker (he left for a ride with a friend as we drive away.) His village gets more than two meters of snow each winter. Photo by Randy Leffingwell 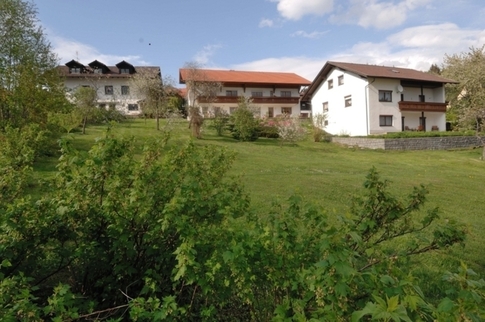 This is typical Bavarian residential architecture. Walls are thick and roof pitchers are fairly steep to aid snow runoff. Photo by Randy Leffingwell 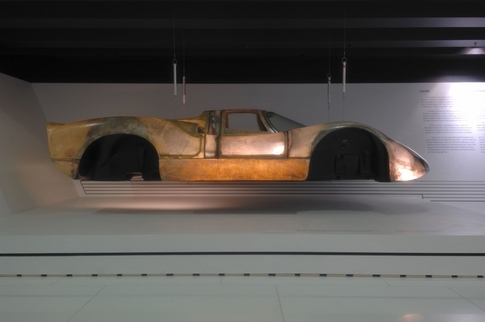 On display in the Porsche Museum in Stuttgart, this 908 body uses such thin fiberglass that light shines through it. Porsche design and engineering strive for the lightest weight possible in its road and race cars. Photo by Randy Leffingwell 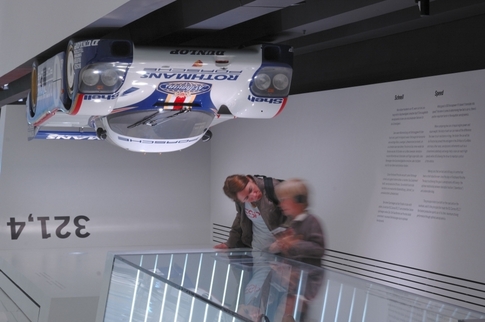 To demonstrate "ground effects" aerodynamics, Porsche mounted this 956 Le Mans winner upside down. "321,4" represents the theoretical speed in km/h (199.7 mph) at which the car's suction would hold it to the ceiling. Photo by Randy Leffingwell

With no ropes to hold visitors back, they can peek into the cars of their dreams. One gets the feeling the cars are the stars at the Porsche Museum. Photo by Randy Leffingwell 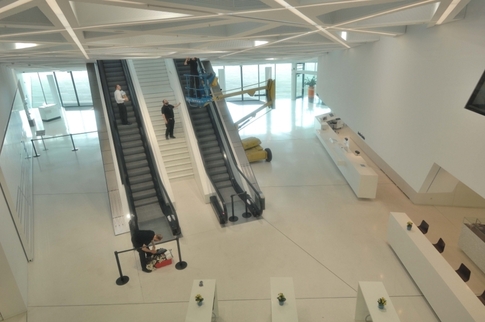 On Mondays, the museum closes for routine repairs and to give the staff a breather. High ceilings require hydraulic lifts to replace light bulbs. Photo by Randy Leffingwell 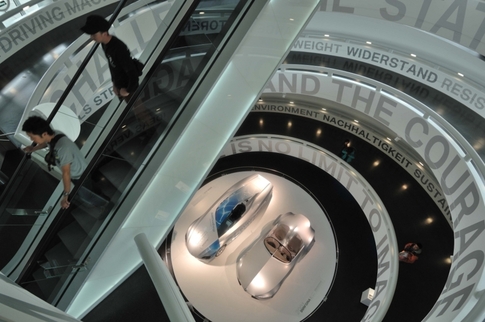 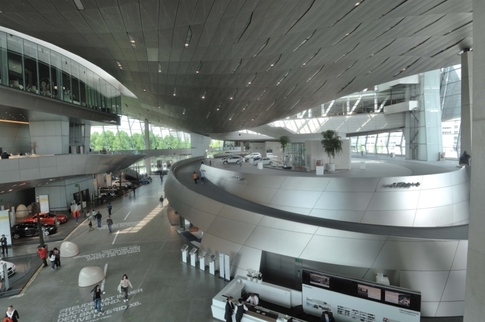 BMW Welt is striking with brushed metal. Ramp in center leads up to and down from customer delivery. Upper left is Restaurant International, a fine dining facility with a Bavarian menu. Photo by Randy Leffingwell 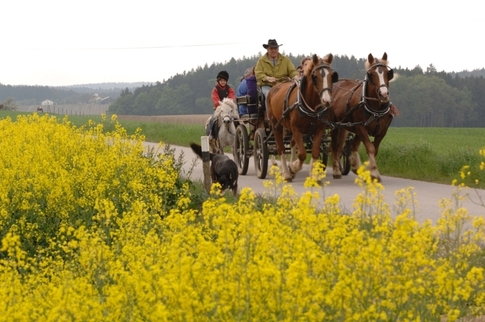 The week's work done, this family heads off on a Sunday afternoon horse-and-cart ride along their rapeseed fields just north of Munich. Photo by Randy Leffingwell 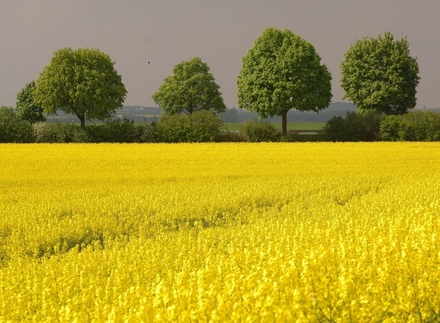 Rapeseed is harvested to produce vegetable oil (also called Canola Oil in some places) as well as animal feed and biodiesel fuel. Through honey bees it also produces a peppery honey. It is prevalent in southern Germany. Photo by Randy Leffingwell

Today we met a driving hero, a real legend in motorsports and a current spokesman and development driver for Porsche, Walter Röhrl.

Due to a conflict in his schedule, it worked best for him if we came to his village, far to the south of Stuttgart. He and his wife and cat live in a home they designed some years ago in Sant Englmar. Walter is soft-spoken, quick to smile, tall, slim, and very fit. He told us he believes fitness keeps him in mental shape for his job — and he says it’s been part of his “secret,” if there is one, to his success over the past decades.

I think we discovered the real story though. It starts with early training. He grew up in Regensberg, a larger city not too far from Sant Englmar, and his first job was with the Roman Catholic Bishop’s office in Regensberg. The office hired him to drive (sometimes with someone from the office and sometimes alone) to view and inspect all the properties the church owned in the district and this — apparently — was quite an extensive inventory. Walter drove 130,000 kilometers each year. That’s 81,250 miles. And the roads in that area are wonderful, twisty, hilly.

He began saving his money for his own car and his father gave him life-changing advice: “Buy only a car if you can buy a good car. A good car is a Porsche.” So in 1967, he bought his first, a 356.

Sunday we decided to inspect the competition and we headed from Walter Röhrl’s beautiful village to bustling Munich, the city of BMW’s headquarters.

We visited the BMW Museum and its customer car delivery center, BMW Welt. There is a big difference of architectural style and scale between Porsche’s facilities in Stuttgart and those BMW has established in Munich as befitting the two car manufacturers’ sizes. With the BMW museum building, the architect — Wolf Prix of Coop Himmelb(l)au of Vienna, Austria — made the building an engaged part of the experience. Hidden projectors shine graphics and artwork on many of the walls, turning them into artists’ canvasses. For some it may approach a sensory overload; I found it very entertaining.

By contrast, the folks at Delugan Meissl Associate Architects, also of Vienna, who did the Porsche Museum, let the cars remain the stars. Yes, the building is spectacular but in my mind, it doesn’t compete for your attention the way the BMW museum does.

I’ve included some pictures to show you the Welt center and some interior views of the museum. The museum has a special exhibit going on at the time of this writing of the famous Art Cars, those painted by the likes of Alexander Calder, Frank Stella, Andy Warhol, and a dozen others. These the museum showed most dramatically in the rotunda building which will remind almost any visitor of the Guggenheim Museum in New York City, designed by Frank Lloyd Wright. Here, exhibit designers sited the cars on a variety of landings on the spiraling climb to the top level. The first cars from the 1970s started on the lowest levels and chronology rose with the altitude so that most recent efforts were just below the roof.

From BMW, we headed to the Deutsches Transportation Museum which, unfortunately for us, was closed because May 1 is a national holiday in Germany. That museum has mounted a special exhibition of the history of Motorsport, so we definitely will go back on days when we know they are open.

So, with no deadline in mind, we took off into the countryside. It is Spring in Germany and fields and forests are lush and verdant. We drove through kilometer after kilometer of farm land and found fields of rapeseed, a brilliant yellow flower that is used to make a cooking oil, and nearly as many with hops trellises. Hops, of course, help the world make beer.