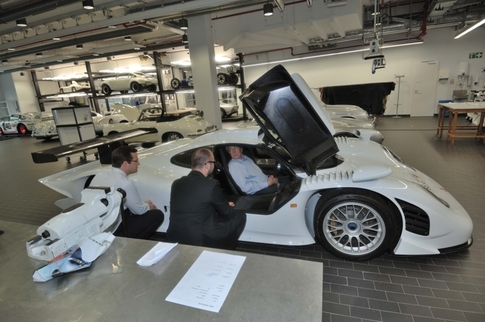 Jerry Reilly is trying on "his" 1998 GT1 road car for a fit before Sunday's parade. This is in the repair shops on the ground floor of the museum. Photo by Randy Leffingwell 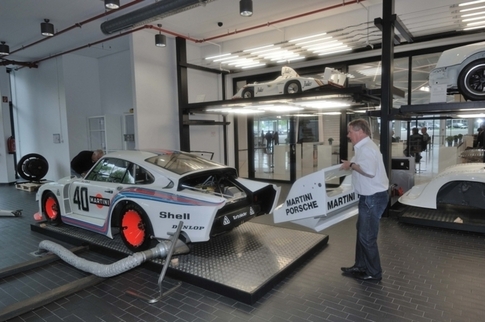 Klaus Bischof, head of the Museum car collection, removes the rear wing of the 1976 935 "Baby" before testing its engine and all of its systems in advance of the parade on Sunday. Photo by Randy Leffingwell 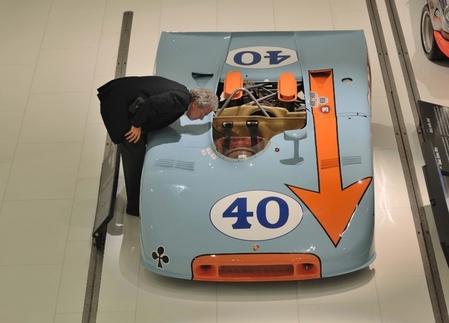 This is a necessary inspection of the legendary 908/3. Leg room for the passenger is severely limited. Even the driver should be short. Photo by Randy Leffingwell 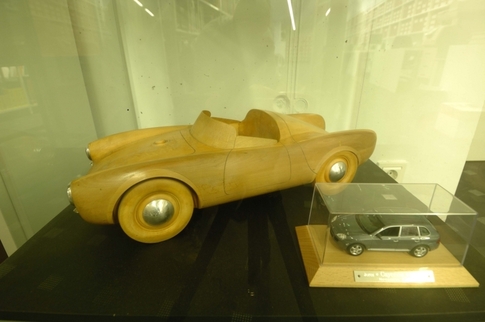 This was the 550 Spyder "patent model" presented to the federal court in Germany when Porsche wished to sell full-size 550s to racing customers. The judge kept it after retiring and later returned it to Porsche. Photo by Randy Leffingwell 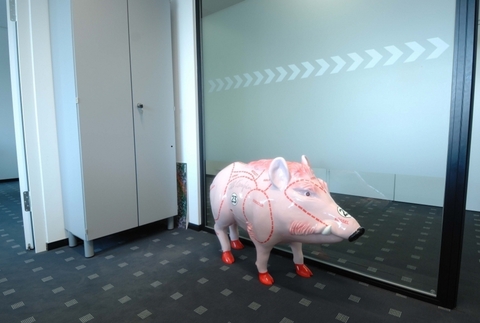 Outside Dieter Landenberger's office is the pink pig. It suffices to say this is NOT the 917 race car of the same name, though driver Willi Kauhsen signed it anyway. Photo by Randy Leffingwell

This morning, we spent nearly two hours with Hans Herrmann, who is utterly charming and is a great story teller.

Hans is most celebrated for his incredible luck. This had much more to do with surviving the dangers of racing in the 1950s (when he started) and 1960s, when one driver died on average each month, than his successes as a driver — which were considerable.

In the afternoon, we got to spend nearly two-and-one-half hours with Herbert Linge. Linge started with Porsche as one of eight mechanics hired in 1943! During the war he got a student exemption as an engineering candidate, but he was drafted just as it ended so he returned to Porsche where he became the company’s first mechanic for the U.S. market. U.S. importer Max Hoffman gave Linge his Cadillac convertible and Linge drove from New York to Florida to Chicago to Washington, D.C. to Denver to Minneapolis tuning and fixing customer 356s in the early 1950s. Porsche and Hoffman recognized that this car was a tough sell since Americans (then and now) were used to big cars and big engines.

Both of these drivers spent a lot of time with each other so it was fascinating to ask each one to talk about the same event. Getting both sides of the story was an interesting exercise.

Thursday has been a red letter day. Starting in the morning with one of my Porsche racing heroes, Roland Kussmaul, we learned a fascinating bit of his early history at Porsche.

Every new hire at Porsche does a two year apprenticeship. Because Kussmaul already had mechanical experience and engineering training, for his training time between 1969 and early 1972, the company started him into the Konstruction program. He worked on tanks — Panzers, that Porsche designed and developed for the German military. One of his first tasks was to fabricate new pedals for a prototype Panzer. His boss told him tanks moved with hydraulic assistance to turn and stop the tracks. Light pressure was all that was needed.

Kussmaul had done some racing and wanted to be a racing engineer so he fabricated a set of pedals that weighed about five kilograms — perhaps too much of a racing application for a combat vehicle, but they did the job. He installed them, other engineers did a test, and everything was fine. Then sometime in the afternoon, another engineer not quite so familiar with tank operation got in, slid down into the operator’s chair, and fired up the engine. Unfortunately, the previous operator had left the Panzer in gear, so it took off at a respectable pace. Toward a brick wall.

As Kussmaul explained, this other engineer was not so familiar with the concept of hydraulically assisted brakes so he jammed both feet as hard as he could on the brake pedals, breaking them off. That’s break, not brake. It wasn’t until a few meters outside the wall that the panicked engineer found the ignition key and shut off the engine. Kussmaul laughed today as he described the perfect silhouette of the tank through the brick wall. His boss, whom Roland described as a very calm individual, looked at him and said, “Herr Kussmaul, perhaps Panzer Konstruction is not the right match for you.” The next day, Kussmaul was learning Porsche’s techniques for car manufacture.

Next on our calendar was Walter Naher. This quiet, calm man could have been Kussmaul’s boss in the Panzers. Instead, he worked on chassis engineering for a number of Porsche’s racing and road cars. At the time, Ferdinand Piëch still was working at Porsche; he would get exotic cars and special sports cars for a long weekend and drive them hard to get impressions of what the company’s competition was doing. The cars came back to the factory and the next one into them was Naher, who was expected to evaluate them as well and report his conclusions to Piëch. That led to a career developing competition and series production vehicles meant to be better than anything from other manufacturers.

Naher was one of the three men who developed the “self-correcting axle,” the famous “Weissach Axle” for the rear end of the 928, to turn it into one of the best handling front-engine/rear-drive cars ever. He worked on 956 and 962 models and spent a lot of time with Norbert Singer on the 2708 Indy Car project. He was a race engineer for more than a dozen 24 Hours of Le Mans races. We had only two hours with him, but it would have been easy to continue talking with him till next Wednesday.

Last of the day was Manfred Jantke, who was PR and Racing Manager from 1972 to 1982, and then strictly PR manager till he left in 1993. Before coming to Porsche, he had been a journalist with Germany’s premier enthusiast magazine, Auto Motor und Sport, and also had raced for a number of private owners and teams. When an offer came from Porsche, he had to consider it long and hard: On one hand, he had tremendous freedom as a journalist, driving everything, free to write what he thought, and available to race a variety of cars for generous owners.

But Jantke always had been, as he put it, “outside of the wall.” He wondered what it was like to “know everything, not just what people like me would tell you now.” He planned to stay for four or five years. Instead he left after 20, having experienced incredible repeat victories in the American Can-Am series with 935s, 956s and 962s at Le Mans and other venues, and incredible frustration at Indianapolis and the Formula One efforts. His stories had us laughing and holding our heads and his perspective was very broad and very deep. He is the first individual either Dieter Landenberger or I ever have heard put together in one timeline the end of Porsche racing in the late 1980s. It is one hell of a story.

This coming weekend will be a very big one in Stuttgart. Germany celebrates the 125th anniversary of the automobile and on Sunday, the German car manufacturers are emptying their museums and collections of cars to parade through town. The route runs from the Porsche Museum across town to Mercedes-Benz and from there to Stuttgart City Hall. At this writing, Dieter is planning to get both Jerry and me into cars — me as a passenger in the Targa Florio-winning 908/3, and Jerry in the one-and-only 1998 GT1 Road Car.