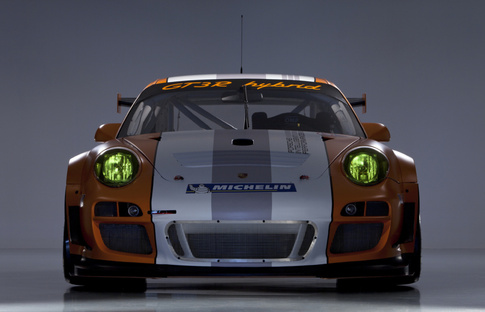 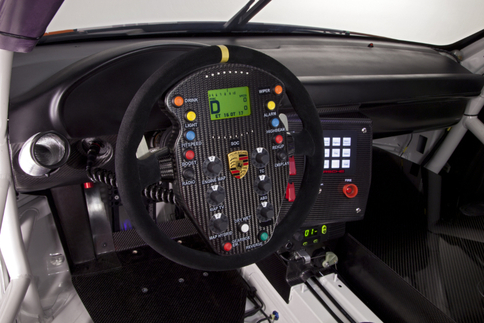 Most of the displays and controls have been moved to the steering wheel. Other functions are operated via backlit buttons on the center console. Photo courtesy Porsche 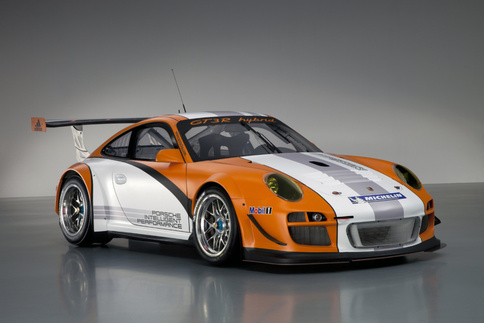 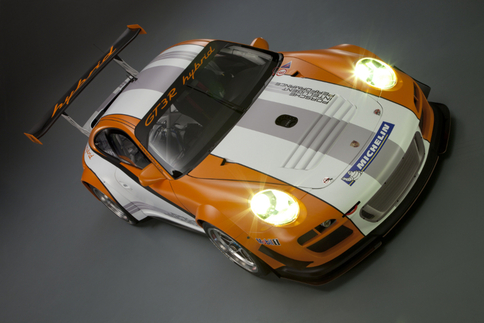 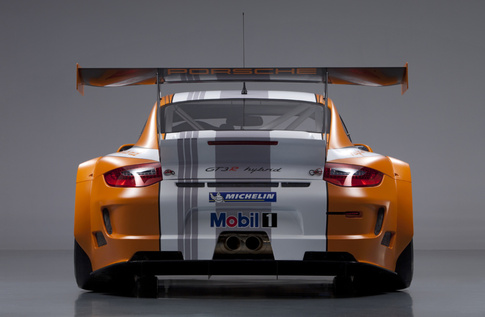 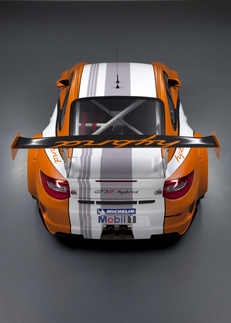 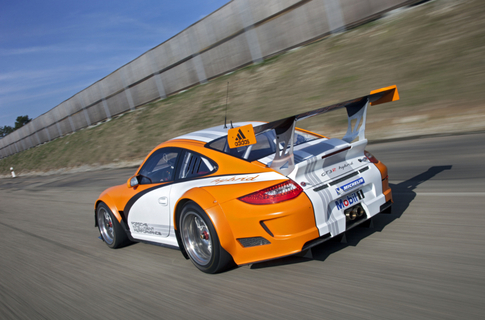 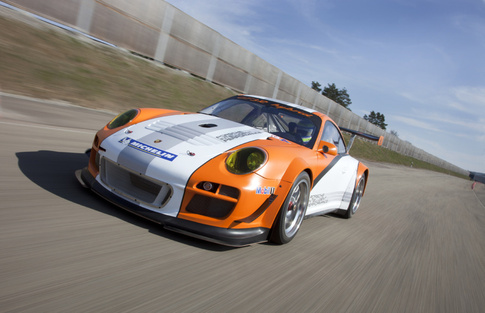 The large louvers in front of the rear fenders on the old car are no longer needed. Without them, drag is reduced. Photo courtesy Porsche 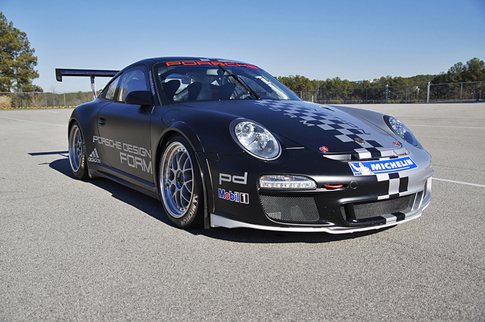 Improvements on last year’s car result in a 20-percent weight reduction of its hybrid components, better efficiency, and a revised cockpit complete with a new steering wheel, Porsche says.

At last year’s Nürburgring 24, the Hybrid race car was in the lead at 22 hours and 15 minutes when it broke down and failed to finish the race.

Each of the two electric motors that drive the front wheels is now rated at 75 kilowatts, up from 60 kW, for a total of about 200 horsepower. The 4.0-liter, gasoline-powered, six-cylinder boxer located at the rear of the car produces approximately 470 hp, according to Porsche. Assuming the combined horsepower rating between the three powerplants is additive, total output of the Hybrid race car is 670 hp when the flywheel accumulator hybrid system is adequately charged. Combining the power ratings of last year’s car indicates it had 645 hp.

Porsche also claims the GT3 R Hybrid weighs 50 kg less overall this year, which equates to a 110 pound weight loss. At 2,866 pounds, the power-to-weight ratio of the car could dip to 4.28 pounds per horsepower with all three motors at full steam.

All this makes it hard to believe that the GT3 R Hybrid will merely “achieve the same lap times as its predecessor but with less fuel consumption,” as Porsche conservatively states. We expect this car to improve upon the previous car’s lap times.

Stuttgart/Atlanta March 17— Porsche AG will enter the Nürburgring 24 hour race on June 25, 2011, with a more advanced version of the Porsche 911 GT3 R Hybrid. The priority for this latest edition was improvement of efficiency through the targeted optimization of hybrid components, which also resulted in a 20 percent weight reduction. Version 2.0 of the 911 GT3 R Hybrid is intended to achieve the same lap times as its predecessor but with less fuel consumption.

The general layout of the hybrid was adopted from the 2010 model. A portal axle with two electric motors drives the front wheels and supplements the four-liter – depending on the balance of performance classification – approximately 470 hp, six-cylinder boxer engine at the rear. The output of both electric motors has increased from 60 to 75 kilowatts each. For bursts of multiple seconds at a time, drivers now have almost an additional 200 hp at their disposal with the 911 GT3 R Hybrid 2.0. Depending on the programming, this power is automatically activated through use of the throttle pedal. Moreover, pilots can manually call up this extra power, for instance when overtaking.

The electric flywheel accumulator, with its rotor spinning up to 40,000 rpm and storing energy mechanically as rotational energy, is now housed with the other hybrid components in a carbon fiber safety cell on the passenger’s side.

At first glance, the new GT3 R Hybrid is clearly distinguishable from the 2010 model. Thanks to the optimization of the hybrid system’s high voltage components, the large louvers in front of the rear fenders were no longer necessary. This reduces drag and also lowers fuel consumption. All in all, the weight of the vehicle decreased from 1,350 to 1,300 kilograms.

“We’ve collected a great deal of information from our races on the Nürburgring, at the ALMS race at Road Atlanta, as well as from the ILMC race on China’s Zhuhai circuit. The data was invaluable for the further development of our racing laboratory,” says Hartmut Kristen, head of Porsche motorsport. “The emphasis of our work was on improving efficiency. That means we want to keep the lap times consistent with 2010 but use less energy, hence less fuel. In this way, we support future developments of road-going, sporting hybrid vehicles.”

The cockpit of the 911 GT3 R Hybrid has also been completely revised. Most of the displays and controls have moved to the steering wheel. Drivers can operate the rest of the functions via backlit buttons now situated on the centre console. Priority was placed on the ergonomics and the clear layout for pilots – particularly in darkness.

The new 911 GT3 R Hybrid is a perfect example of the ‘Porsche Intelligent Performance’ philosophy, a principle found in every Porsche — more power on less fuel, more efficiency and lower CO2 emissions — on the race track and on the road.

If you’ve worked your way through the various courses in the Porsche Sport Driving School and are looking for something more, you’re in luck. For $10,000, you can advance to the next level of instruction: the Two-Day Advanced Driving Course. Entrants will be piloting a factory race car, the same GT3 Cup car seen in ALMS’s GT Challenge class and Grand-Am’s GT class.

The notable difference between the race car and the school car is the addition of a passenger seat for an instructor in the latter.

Here’s the catch: According to Porsche’s website, in order to qualify for the $10,000 two-day school, pupils must first complete three progressively more difficult (and expensive) driving school courses at a total of $11,785.

ATLANTA – March 17, 2011 – Graduates of the three-day race license program at the Porsche Sport Driving School at Barber Motorsports Park in Birmingham and other qualified race-licensed drivers now have a chance to hone their skills at the most advanced race car driving course available.

The 911 GT3 Cup Experience is designed to provide the ultimate GT race car curriculum. Vehicle attributes include 450 horsepower (hp), Michelin racing slicks and a team of elite instructors featuring Hurley Haywood, one of the world’s most successful road racers. Participants will learn from the best in the industry with personal one-on-one coaching and video along with data acquisition review that will provide the most intense driver training experience available.

Built specifically for this program, the two 911 GT3 Cup cars – like all Cup cars – came down the same assembly line in Stuttgart, Germany, as the street version of the 911, and were tested at the Porsche Research and Development Center at Weissach before being shipping to the U.S. They were then prepared at Porsche Motorsports North America in Santa Ana, Calif., where the second seat was added.

This program is designed for experienced drivers that are ready for the next level and qualified candidates will be able to sign up by calling 888-204-7474 or visiting www.porschedriving.com for more information on this, or the other Porsche Sport Driving School courses.

“The school has been very successful from the outset, due both to the great facility we have here at Barber Motorsports Park and our experienced instructor staff. As a matter of fact, we have just surpassed 10,000 students; teaching drivers how to get the most out of their Porsche,” said David Pryor, Vice President of Marketing for Porsche Cars North America.

“This 911 GT3 Cup Experience gives us a chance to demonstrate the link between Porsche racing cars and their street counterparts, said Pryor.

Stronger, wider, faster – the new version of the Porsche 911 GT3 Cup race car offers its many customers around the world even greater value and performance than ever before. The successor to the best-selling racing car of all time built in a production series of more than 1,400 units is based on the 911 GT3 RS, with the weight of the racing model reduced significantly versus the already lightweight road-going version. This is the first GT3 Cup to feature the 44-millimetre (1.73”) wider body at the rear, providing sufficient space for even larger wheels. Wider wheel arches at the front clearly show that the front wheels are also likewise new. Engine capacity is up by 0.2 liters over the former model; engine output is 30 bhp more than before. The most important facts and figures: 3.8-litre six-cylinder horizontally-opposed power unit developing 450 HP (331 kW); sequential six-speed manual gearbox; weight 1,200 kg (2,646 lb); racing version of the 911 GT3 RS.

The most recent success of this race car was several weeks ago as the TRG Porsche 911 GT3 Cup lead a one-two Porsche finish at the 2011 Rolex 24 at Daytona.