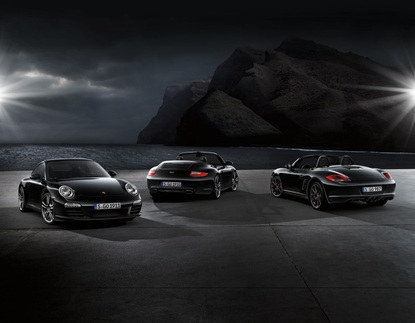 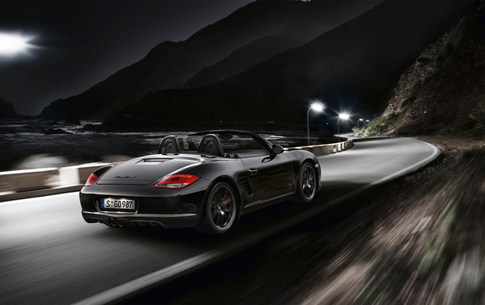 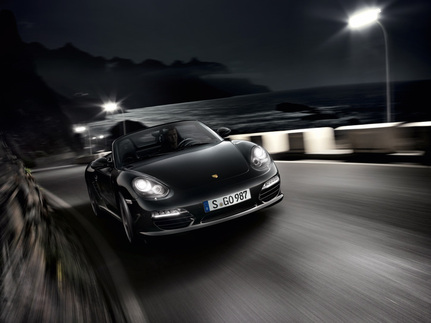 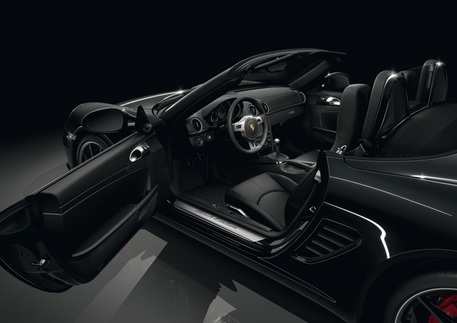 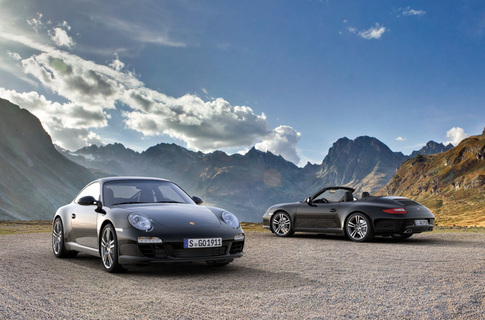 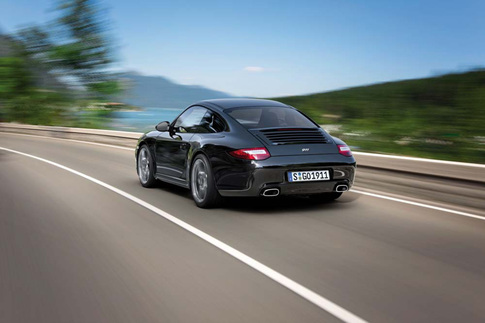 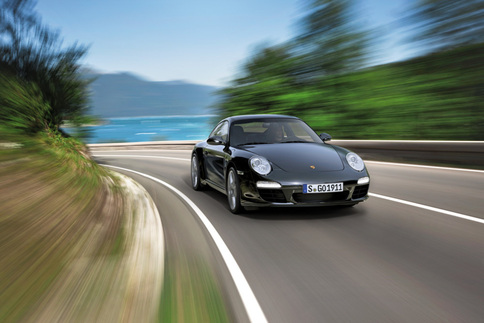 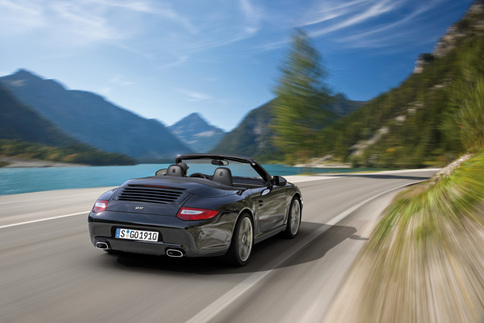 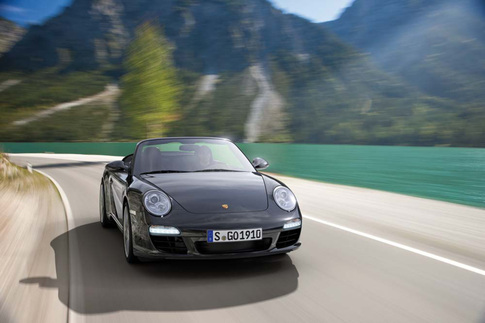 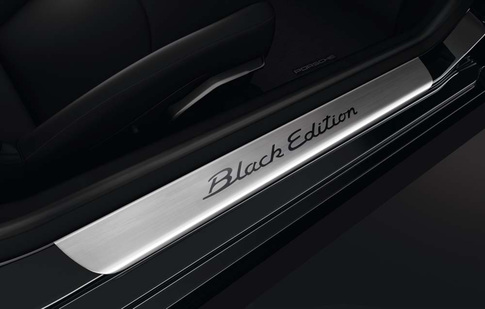 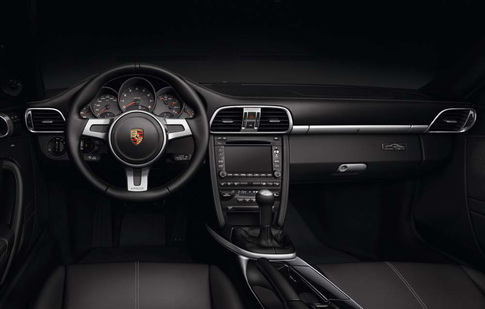 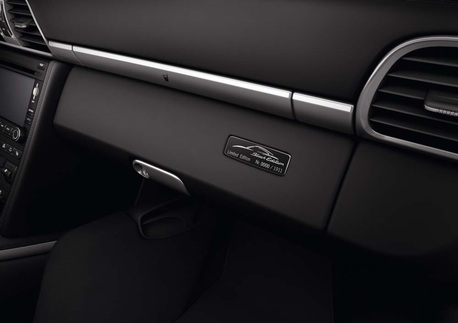 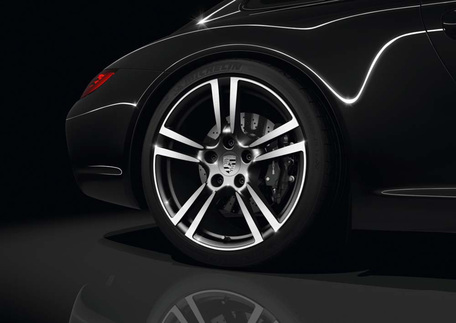 Porsche unveiled the new 2012 Boxster S Black Edition today, only a week after it announced the 911 Black Edition. Our opinion of this car is much the same as with the rear-engined version – it’s the best bang for your bucks as long as you don’t mind living with an all-black car.

It is interesting that Porsche chose to use the Boxster S over the base car for the Black Edition, especially since the 911 Black Edition – based on the Carrera – splits the lower echelon of 911 hierarchy between the Carrera and Carrera S. And with the Boxster S receiving much attention from the recent Spyder (and now this), it seems the base Boxster is being left out before the next-generation of mid-engined Porsches arrive.

ATLANTA – February 2, 2011 – Following on the heels of the recently announced 911 Black Edition, Porsche introduces a new, luxurious and limited edition Boxster S this spring. The 2012 Boxster S Black Edition features a 10- horsepower boost and a long list of standard equipment at an attractive price.

This new mid-engine sports car is only available in solid black and features a monochrome treatment with a black body, black convertible top and black painted 19-inch Boxster Spyder design wheels. Normally contrasting trim pieces from the Boxster S are also painted for a uniform look: the supplemental safety bars and side air intake grilles are painted black, as are the twin exhaust tailpipes and the model designation on the rear luggage compartment lid. A Black Edition model designation is embossed on the side of the fabric roof.

The monochromatic theme continues to the interior where black is the only available color, with aluminum and stainless steel used as accents. The brushed stainless steel door-entry guards feature Black Edition lettering, and the standard SportDesign steering wheel features twin aluminum-look spokes with a rim of smooth-finish black leather. Also painted black are the trim strips on the dashboard and around the six-speed manual shift lever or the gear selector for the optional Porsche Doppelkupplungsgetriebe (PDK) seven-speed double clutch transmission, while the instrument dials are black instead of the usual white. Two final touches are the Porsche crest embossed on the headrests and a limited-edition badge on the glove compartment.

The Black Edition’s chassis builds on the foundation of the Boxster S, which already features exceptional balance and handling. The lightest 19-inch wheels in the Porsche lineup are fitted 235/35 ZR 19 tires up front and 265/35 ZR 19 in the rear, providing a visually dynamic upgrade from the 18-inch wheels on the regular Boxster S. A 3.4-liter six-cylinder engine with direct fuel injection, mounted in front of the rear axle, produces 320 horsepower – 10 more than in the Boxster S – while also delivering excellent fuel economy, particularly when coupled with the PDK transmission. With PDK, the Boxster S Black Edition will accelerate from 0 to 60 mph in just 4.8 seconds and reaches a top track speed of 170 mph while achieving EPA estimated fuel economy of 19 city and 26 highway (20/29 when equipped with PDK). An optional Sport Chrono package further reduces 0-to-60 acceleration times to 4.6 seconds, two-tenths of a second faster than the Boxster S, while providing a launch control function and more aggressive Sport and Sport Plus shift strategies.

The 2012 Boxster S Black Edition price is $65,200 which gives buyers added value on several levels considering the extra functional and visual upgrades and the enhanced power output. When compared to the MSRP of a comparably equipped Boxster S, this limited edition model saves the buyer $3,200.

Porsche announced it’s adding the 911 Black Edition to the 2011 model line-up with a total production run of 1,911 vehicles, and approximately 30 percent of them are heading to our shores. The car will be offered as a coupe or Cabriolet and will come with the base car’s 345-hp 3.6-liter flat six. Only one shade of color will be offered: Black.

Buyers can, however, pick between solid black and Basalt Black Metallic.

As the 997 generation 911 nears the end of its production run, Porsche has been keen to sell the last batch with a flurry of “special” and niche models. The Speedster and Carrera GTS are the latest examples in the trend which started with the introduction of the 911 Sport Classic as a 2010 model. Now we get this Black Edition.

And that’s not a bad thing. An internet search reveals comments saying the Black Edition doesn’t seem all that “special.” And they’re right, to an extent. The equipment standard on the Black Edition is an option on the base Carrera. This ain’t a Speedster.

But, extravagant exclusivity isn’t the point of the car. Buying a Black Edition — or Carrera GTS, for that matter — is like buying a video game system at Costco: Opt for the bundle and you get some extra goodies for your cash. In the Black Edition’s case that means more expensive wheels, the infotainment package, and a black-and-aluminum look interior, all at a discount.

ATLANTA – January 25, 2011 –Based on the 3.6-liter, 345 horsepower (hp) 911 Carrera, the upcoming 911 Black Edition features a comprehensive list of standard equipment and will be available as a Coupe or Cabriolet and only in black. Exclusivity and price help make this new 911 Carrera distinctive as the 911 Black Edition will be limited to just 1,911 worldwide units. MSRP will be $81,300 for the Coupe and $91,300 for the Cabriolet, and they will be available in the spring of 2011.

The 911 Black Edition will only be available in black, with two paint choices: Solid Black or the optional Basalt Black Metallic, with highlights provided by the 19 inch 911 Turbo II two-color wheels, their dichroic effect complementing the discreet elegance of the exterior color. In addition, the rims provide an unobstructed view of the brake’s black, four-piston aluminum monobloc fixed calipers.

Exclusive to the Black Edition, black lettering on the stainless steel door entry guards provides the first hint of the high-quality interior design and continues the exterior color scheme. Also included is a sport design steering wheel while the instrument cluster remains black. On the glove compartment lid, a badge testifies to the 911 Black Edition’s limited production run while the decorative molding on the dashboard, gear lever or selector and air vents provide a contrast with their aluminum look paint. The rear center console is painted in the exterior color.

An acoustic highlight of the 911 Black Edition’s additional equipment is the BOSE® Surround Sound-System that is now standard in the 911 Black Edition, along with the Porsche touch screen Communication Management (PCM) system, XM Radio, XM NavTraffic and GPS based navigation.

All told, the 911 Black Edition represents an approximate $6,000 savings over a similarly equipped 911 Carrera.

The 911 Black Edition’s technology conforms to the Carrera standard: Under the rear lid lies the Carrera flat-six cylinder engine, producing 345 hp at 6,500 rpm from 3,614 cubic centimeters. Coupled with the six-speed manual gearbox, the Carrera achieves a top-track speed of 180 mph in both body versions. When fitted with the Porsche-Doppelkupplungsgetriebe (PDK) seven-speed double clutch transmission and Sport Chrono Plus Package, the Coupe can reach 60 mph in as little as 4.3 seconds, the Cabriolet in 4.5. Despite the impressive performance figures, fuel consumption remains moderate with EPA ratings of 19 mpg city, 27 highway, also with the PDK.