GT3 R Hybrid's race in China less than a week away 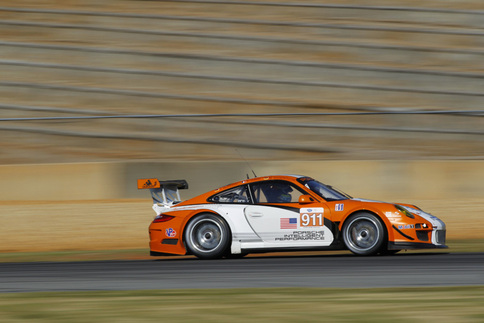 Built in 1996, the 2.67 mile circuit in Zhuhai, which borders the Macau Peninsula in Southern China, is the country’s first permanent race track.

The car will make its Chinese debut following a successful race in Petit Le Mans at Road Atlanta. As in its previous races at Petit and the 24 Hours of Nürburgring, the car will not compete for points and will be the lone competitor in the GT Experimental class.

The race is one of three in the newly inaugurated Intercontinental Le Mans Cup. The other two are the 24 Hours of Nürburgring and Petit Le Mans.

If nothing else, results from the past two races indicate that the hybrid should be able to complete the full 1,000 kilometer race in China although, compared to other GTs such as the GT3 RSR, its performance is hard to predict. Darren Law, a regular Excellence-mag.com contributor and driver for Flying Lizard Motorsports, said the GT3 R Hybrid was lapping Road Atlanta with similar times to the fastest GT3 RSRs during practice for Petit Le Mans. The Porsche completed the 10 hour Petit Le Mans race but a failure with the 4.0-liter flat-six engine prevented the Hybrid from finishing the 24 Hours of Nürburgring after leading at over 22 hours.

“Having the chance to contest my first race in Asia with the 911 GT3 R Hybrid is something quite special,” Bergmeister said. He raced the GT3 R Hybrid at the 24 Hours of Nürburgring with fellow factory driver Wolf Henzler.

“It’s a great experience to be able to work on a project that writes history,” Long said.

The GT3 R Hybrid uses a Kinetic Energy Recovery System (KERS) developed by Williams, a technology seen on select Formula 1 cars in the 2009 season. Under braking, the system converts kinetic energy into electrical energy and stores it in a rotating flywheel mounted next to the driver in the passenger area, concealed in a carbon fiber box. Two electric motors drive the front wheels with a combined 160 hp and are driver activated by a “Boost” button on the steering wheel. The engine in the back is the 4.0-liter flat six seen in other race GT3s.

The race begins on Sunday at noon in China, which means coverage will start on Saturday at 11:00 PM eastern, 8:00 PM Pacific. There will be no television coverage in North America, but fans can visit the “Le Mans website”:http://www.lemans.org (click “English” in the top-right corner of page) for radio coverage or check Excellence-mag.com’s Of Note for pre- and post-race coverage.