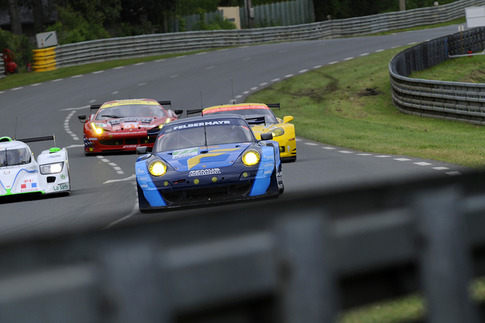 It’s not uncommon for there to be a lot of traffic entering Porsche Curves.

On a track with as many iconic sections as the Circuit des 24 Heures — Tertre Rouge, Mulsanne Straight, Mulsanne Corner, Indianapolis, Arnage — it would seem that the question, “What is your favorite part?” would yield a number of different answers. Not so! At least, not amongst the Porsche drivers, it seems.

Flying Lizard driver Jörg Bergmeister’s response is typical. “The Porsche Curves! Definitely. Because it’s a super-quick section, with not much runoff. It’s very easy to lose a car there. But it’s also my favorite part of the track, I have to say. It’s so fast, and so challenging.” With drivers consistently answering “Porsche Curves” as their favorite section, it can start to sound like the party line (i.e., “I drive a Porsche, so that corner must be my favorite.”). But, walking the section and observing its right, left, right, left flow, with varying radius curves and camber changes, it’s clearly unlike any other part of the circuit.

The approach to Porsche Curves is D139 – a public thoroughfare during all but a couple days each year (this photo is opposite the direction of race direction). All photos by Bob Chapman/AutosportImage.com

The entry to “Virage Porsche” comes late in the lap. To this day, the vast majority of the circuit remains public roads, and the turn-in to this section takes the driver from public road onto dedicated race circuit (it replaced the public road section famously known as Maison Blanche – “White House” – in 1972).

After the initial apex, it is apparent that there is not much runoff room, should something go wrong.

Prospeed driver Sean Edwards seconds Bergmeister’s comment about the high-speed nature of the section: “We’re at the top of fifth gear, so we must be doing near 260 kph (161 mph) at entry, through the apex between 180 and 200 (112-124 mph), then back up to 230 or 240 (143-149 mph) for the next left and right.” Pointing out a key difference between GT and prototype characteristics, he continues, “In a GT car that weighs 1,200 kilos, it’s not easy like it is in the prototypes, where they can trust the downforce through there.”

Prospeed driver Sean Edwards claims an apex speed between 112 and 124 mph. That speed looks approximately like this.

Racing books teach that the most important part of any track is the corner that leads onto the longest straight. Porsche Curves certainly doesn’t fit that bill, but Patrick Long of Flying Lizard Motorsports says that getting the section “right” is the key to a good lap time. “If you put a stopwatch on the entry to Porsche Curves to the exit, the most time to be gained or lost on a lap is there,” he says. “You can lose a second-and-a-half, easily. The distance that you’re covering in a certain amount of time is so high, because of the speed, that you can develop a huge time gap.”