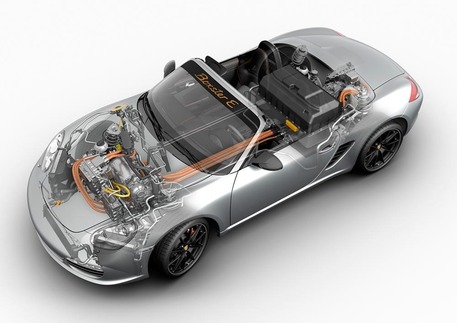 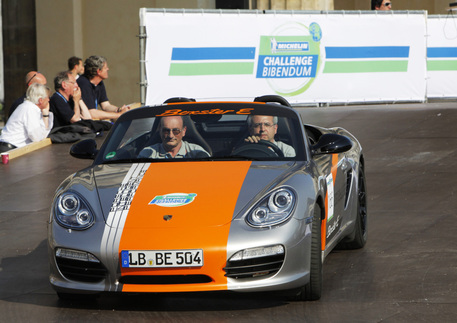 Porsche recently introduced a trio of electric-powered Boxster prototypes that are being used to test two different electric-drive set-ups. They are referred to as the Boxster E.

The tests are designed to evaluate vehicles that rely purely on electricity for propulsion and how said vehicles function within current vehicle infrastructures. The German federal government is sponsoring the trials, so Porsche is receiving part of 130 million Euro allocated to eight “model regions” involved in the tests. Porsche is part of “Model Region Electro-Mobility Stuttgart.”

Significant redevelopment of the basic Boxster platform seems to have been avoided as the battery and motor(s) are located in places where functional accessories to the internal combustion engine used to be. In fact, the lithium-ion battery uses the mounting tabs meant for the flat-six engine.

Each electric motor puts out 90 kilowatts, the equivalent of 121 horsepower, and the AWD E with its two motors puts out twice that number. Porsche claims that, at this point, the AWD model does the zero to 62 mph run in 5.5 seconds and the RWD versions do it in 9.8 seconds.

If the size and detail of a press release is any indication of a model’s importance to a manufacturer, Porsche must consider the electric Boxsters to be fairly significant.

Stuttgart. The two Boxster E prototypes which Porsche showed off at the Michelin Challenge Bibendum in Berlin last week have proved to be a real attraction to the public. At this forum for sustainable mobility, which was staged for the eleventh time this year, representatives from politics, industry, trade and research discussed the environmentally-friendly mobility and vehicle concepts of the future. The trips in the electric Boxsters were in particular demand amongst the expert audience. On a sporty circuit, the vehicles demonstrated that a Boxster with electric drive still remains a genuine Porsche in terms of driving dynamics. In the wake of the GT3 R Hybrid, 918 Spyder and 918 RSR, the Boxster E is yet another sports car concept exhibiting the brand’s characteristic combination of research and driving pleasure.

The Boxster E, with one electric motor apiece on front and rear axle, runs on purely electric power with four-wheel drive and is equivalent to a Boxster S in terms of drivingdynamics. Together with two other Boxster Es, in which an electric motor drives the rear wheels, the prototype is being used to explore the everyday practicality of all-electric vehicles and how they are used, especially in terms of driving and battery charging. What the researchers are after is an understanding of the requirements facing future products, where to go next with Porsche Intelligent Performance and how to integrate electric vehicles into the infrastructure.

The practical trials with the three Boxster Es are part of the “Model Region Electro- Mobility Stuttgart” large-scale trial. The Stuttgart model region is being sponsored as part of the Federal Government’s “Electro-Mobility in Model Regions” project. The Federal Ministry of Transport, Building and Urban Development (BMVBS) is making approximately 130 million euro available from the Federal Government’s economic stimulus package II for eight model regions nationwide. The project is being coordinated by NOW GmbH, the National Organisation for Hydrogen and Fuel Cell Technology.

Thanks to its design as a mid-engine sports car, the Porsche Boxster is the ideal vehicle platform for conducting realistic trials with electric-drive systems. The open-top two-seater car is very light, enabling the new components that are the electric motor, battery and high-voltage technology to be accommodated within the vehicle in a crash proof way. Together with the low drag, this reduces driving resistance for optimal range. Also of importance for a Porsche sports car, even one that is electrically driven, is the high driving dynamics potential, not least as a consequence of the balanced axle-load distribution peculiar to the mid-engine design.

The Boxster E is an all-electric vehicle without any additional combustion engine on board. Propulsion is provided by two independent electric motors with constant mesh gearboxes that act on the front and rear axles. The rear drive unit comprising motor and transmission, together with the power electronics for controlling the electric motor is located where the manual transmission and exhaust system are accommodated in the conventional Boxster. In the front end, the space vacated by the 64-litre fuel tank, now redundant, is occupied by the second drive unit. The power electronics unit in the adjacent luggage compartment serves the front axle electric motor. The Boxster E thereby features all-wheel drive without mechanical transmission of power. To ensure maximum driving stability and traction, a central electric control unit looks after the synchronisation of the two electric motors and controls the drive torque distribution to the front and rear axle.

The two electric motors develop a total power output of 180 kW and a maximum total torque of 540 Nm at a maximum engine speed of approximately 12,000 rpm. That means that the two electric motors in tandem deliver significantly higher drive power than what is available from present day hybrid vehicles’ electric-power units. Not only does the Boxster E’s all-electric drive produce no emissions – it also offers a completely novel form of driving pleasure. The electric drive’s maximum torque kicks in virtually from the first turn of the engine. The Boxster E moves almost silently while at the same time developing powerful propulsion from the very outset. The two motors enable the two-seater to sprint to 100 km/h (62 mph) in 5.5 seconds from a standing start. Its top speed, limited to 200 km/h (124 mph) is achieved without any gear change at all – whether automatic or manual. The two machines’ high power output offers a second advantage into the bargain: It means more recovered power is available because more energy can be recovered during braking. This increases efficiency of the drive unit.

In the case of the two other Boxster Es with rear wheel drive there is no front electric motor, which means that they deliver a power output of 90 kW and a rated torque of 270 Nm. They manage the sprint from a standing start to 100 km/h (62 mph) in 9.8 seconds with their top speed being achieved at 150 km/h (93 mph). Because all Boxster Es are comparatively quiet on the road, Porsche engineers have designed an Active Sound Design system that provides drivers with acoustic feedback as well as alerting any passersby.

Irrespective of variant, the heart of every Boxster E is manufactured by Porsche. This lithium iron-phosphate based traction battery is fitted in place of the combustion engine. Each of its cells has a nominal voltage of 3.3 V and an individual capacity of 20 Ah. Based on the NEDC, the combined energy from 440 individual cells is good for approximately 170 kilometres (107 miles) of driving pleasure in the Boxster E with its ready-for-the-road weight of a mere 1,600 kg. For an overall weight of 341 kg, the battery’s energy content is 29 kWh of which for inherent physical reasons approximately 26 kWh are available for use – an outstanding performance for a battery. Its maximum power output is 240 kW, or 60 kilowatts more than the all-wheel Boxster E draws under full load. The battery and power unit components are connected to two water cooling circuits. As with the conventional power unit, the heat exchangers are accommodated behind the front air intakes.

The battery is anchored to the same points on the body structure as the combustion engine in the Boxster S. There are numerous advantages to this, especially in the event of a crash, because by using the same load paths as in the Boxster S, the battery is optimally retained within the vehicle while at the same time being protected from damage by the surrounding body structure thanks to its central position within the vehicle. As with the combustion engine in the production vehicle, the traction battery is installed in the Boxster E from below and can be swapped out very quickly if so required. This is also facilitated by special motor sport fasteners that enable the battery to be disconnected from the cooling circuit without air getting into the system.

The traction battery is charged via a charging cable. Any conventional socket can be used as an energy source. The charging port on the vehicle features an illuminated ring and as with any Porsche sports car the vehicle is recharged at the front end. The charger is accommodated at the front of the car. It converts alternating current from the socket into direct current, enabling the traction battery to store the electric energy. Its charging capacity is a maximum of 3.3 kW meaning that is takes approximately nine hours for a full charge. The charging time can however be reduced using a rapid charging function. There is enough space left over for luggage in the front luggage compartment despite the electronic components; the Boxster E’s rear luggage compartment remains unchanged.

It goes without saying that all of the production models’ important safety and comfort features are replicated in the Boxster E as well. The new brake system enables an optimal melding of the braking forces of the electrical generators and the mechanical brake system, the Porsche Ceramic Composite Brake (PCCB). The electrically powered air conditioning compressor accommodated in the front luggage compartment ensures comfortable temperatures inside the vehicle.

Not only are the clutch pedal and gearshift lever absent in the Boxster E, there is no rev counter either. In its place is a special E-Power meter in the central instrument cluster display. A swing to the right indicates power call-off and to the left power recovery. Recuperation – namely the recovery of energy by using the electric motors as generators – can be modified by means of the push buttons in the steering wheel. The effect: a sort of on-demand engine brake. Otherwise, when the driver lifts his foot off the accelerator, the Boxster E simply sails on, using the moving vehicle’s kinetic energy. Among its other functions, the instrument cluster’s right-hand TFT display acts as an intelligent range management system, displaying useful driving information: the range remaining or how many miles can be gained by switching off the air conditioning system.