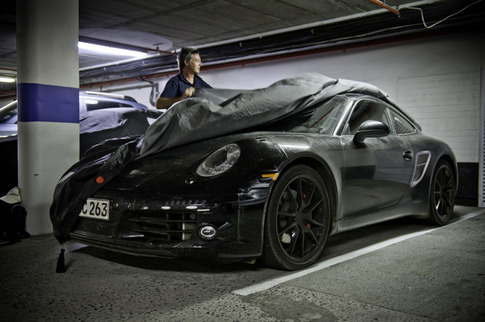 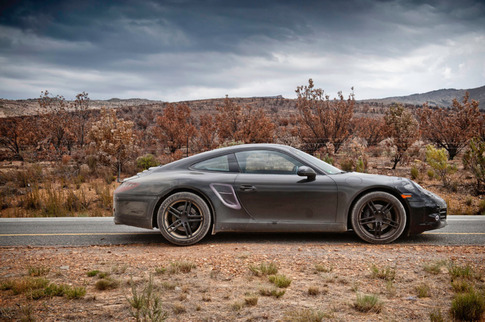 Basic shape remains intact. The higher rear waistline can be seen in profile. 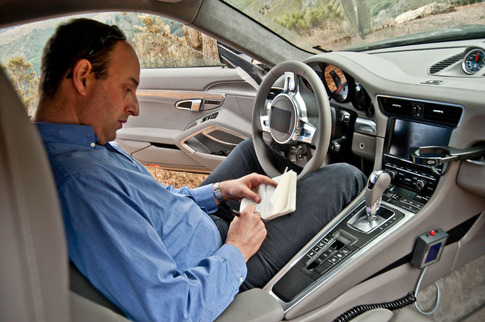 The interior: Can you say Panamera? 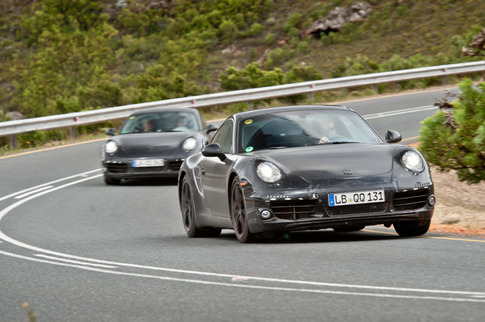 Headlight humps look more peaked than those on the 996 and the 997. Door-mounted mirrors return. 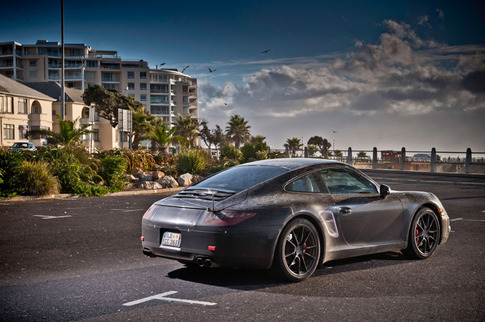 New decklid/spoiler shutlines no longer continue lines created by outer edges of rear window, as was the case in all previous 911s.

Porsche Cars North America has released a short video of two 2012 911s during final testing and validation in South Africa. While the 1:22 video is short, you can catch quite a bit if you watch it closely.

While the 991 maintains the 911’s iconic shape and greenhouse, its waistline is higher at the rear, with a new crease just above the taillights. At the front end, LED running lights remain under headlights still heavily shrouded. The traditional 911 headlight humps look to be more peaked than those on 996- and 997-based 911s, and the wider rear decklid/spoiler breaks from the 911 tradition of carrying the lines created by the outer edges of the rear window down to the rear bumper area. The 991 also marks a return to door-mounted mirrors on Porsche sports cars, a feature missing since the demise of the 993 in 1998.

A new, much larger sunroof panel is slid back in one shot, a bit of footage that also reveals the Panamera-like interior design and trim details as well as the high center console. The flat six breathes high through a central snorkel just below the rear window and flanked by electric cooling fans to either side. As with the 996 back in 1999, the new 911 will be a bit lighter and its standard flat six will shrink from 3.6 to 3.4 liters while gaining a little power. The Carrera S retains 3.8 liters of displacement but gains 15 bhp for an even 400. The seven-speed PDK manumatic will again be available, as will a new, seven-speed (!) PDK-based manual to meet ever-tightening emissions and fuel standards. We’re told the new car rides on a wheelbase that’s approximately four inches longer, which should improve stability but may diminish the car’s “911” handling traits. We’ll have to wait until we drive it to answer that question.

In the meantime, we’ve run across another video, one that’s almost certain to end up with fewer views than PCNA’s short. In this one, obviously shot by an amateur and edited to 007 music, we see our first 991 with less cladding and our first 991 that isn’t black. This 991 appears to be Dark Blue Metallic, and you can clearly see the final surfaces of its rear bumper as well as the panel between its taillights. While the car still wears red stickers over its taillights to disguise them, a tunnel’s shade finally reveals the shape of the next 911’s taillights: They’re similar to the current 911’s Aston-ish LEDs, but even slittier. It’s worth watching the 4:15 video to the end for two reasons: 1) The long clip allows you to really spend time learning the next 911’s contours in varying light, and 2) the music is timed to climax with the video’s only—and short—shot of the front end. Though the front bumper and headlights are still heavily disguised with stickers over the headlights and cladding on and around the front bumper, there are more clues to the shape of the 991’s running lights than we’ve seen previously.