918 Spyder, other new and rare Porsches to be shown in Monterey 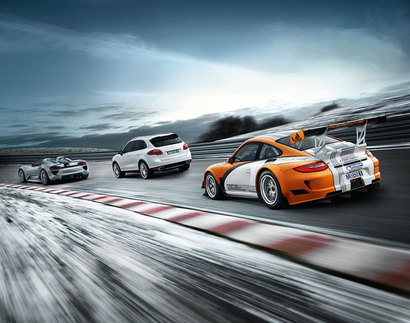 The Porsche 918 Spyder — just approved for production — will make its first North American debut at this year’s Monterey Classic Car Weekend, starting August 9 and ending August 15. Other significant Porsches will be gathered there as well.

The company will be celebrating 60 years of Porsches and people that have placed them on the map as one of the top-tier automobile manufacturers. Porsche also will be launching a website sometime next week to celebrate its 60th anniversary.

According to a press release: “The German automaker is making its point with the new 918 Spyder, the 911 GT3 R Hybrid race car, and the Cayenne S Hybrid — all joining a collection of Porsche classics and contemporary models on display during the Monterey festivities.”

Motorsport fans will get a chance to talk to Porsche factory driver Patrick Long at “The Quail, A Motorsport Gathering” at The Quail lodge between 10 AM and 5 PM on Friday, August 12. The new GT3 R Hybrid will also be showcased at Laguna Seca on Saturday, August 13 and will make an appearance along with the 918 Spyder at the Pebble Beach Concours d’Elegance on Sunday.