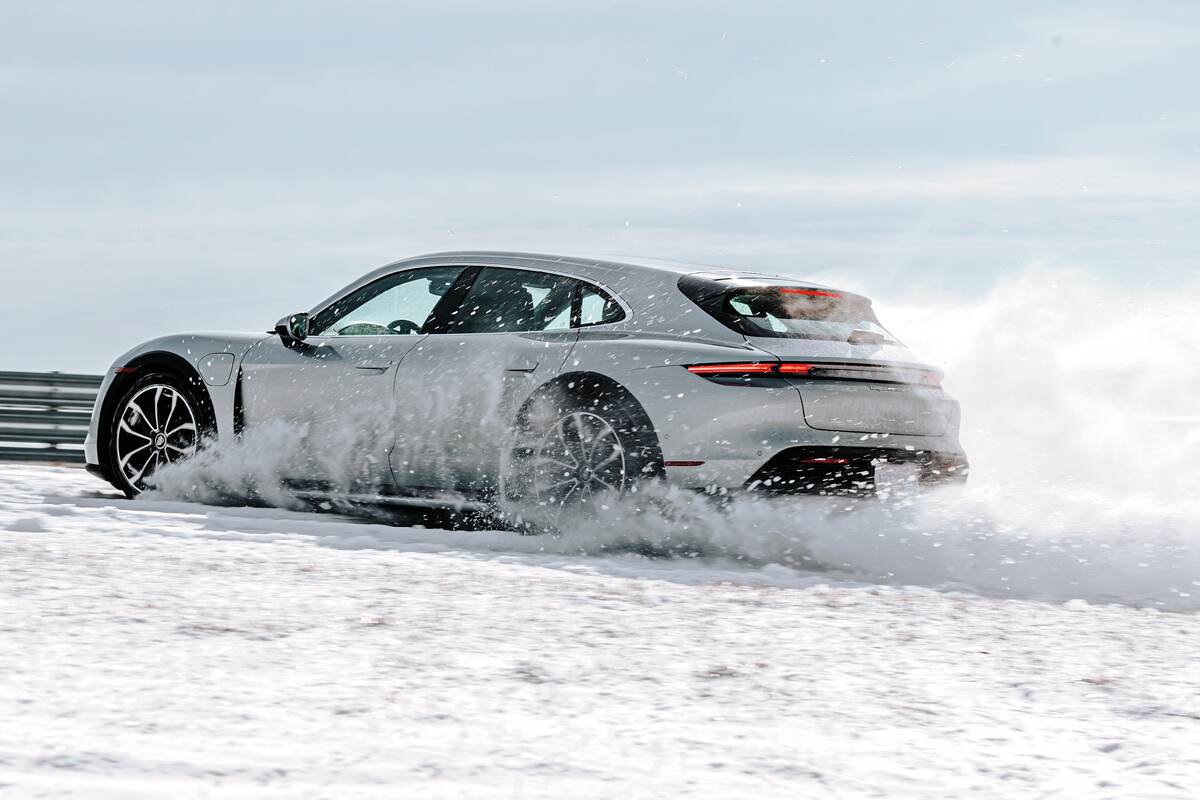 Winter is often no wonderland for all-electric vehicles (EVs). Biting temperatures take a bite out of electric range and charging times, especially for owners who can’t plug in overnight and pre-heat a cabin from the grid rather than a car’s battery pack. But drivers in northerly climes had best get used to it, as Porsche and other performance kings begin elevating EVs to the top ranks of luxury lineups. And it’s hard to beat a Taycan Cross Turismo when the weather gets frightful.

This striking, long-roof version of the Taycan sedan is a dream fulfilled for iconoclastic wagon lovers: Imagine a Ferrari GTC4 Lusso with two more doors, electric shove, and zero tailpipe emissions, for less than half the price. Like that improbable Ferrari, first created in 2011 as the FF—my introduction came on a mini rally route carved into a ski slope in the Dolomites—the Porsche combines four-season capability with lots of hatch space plus more headroom for rear passengers.

Unlike the Taycan sedan, all five Cross Turismo models get an electric motor at each axle for all-wheel-drive grunt and grip and an adaptive air suspension with a wider spectrum of ride heights. All of them also have the largest “Performance Battery Plus” with a 93.6-kilowatt-hour gross capacity. 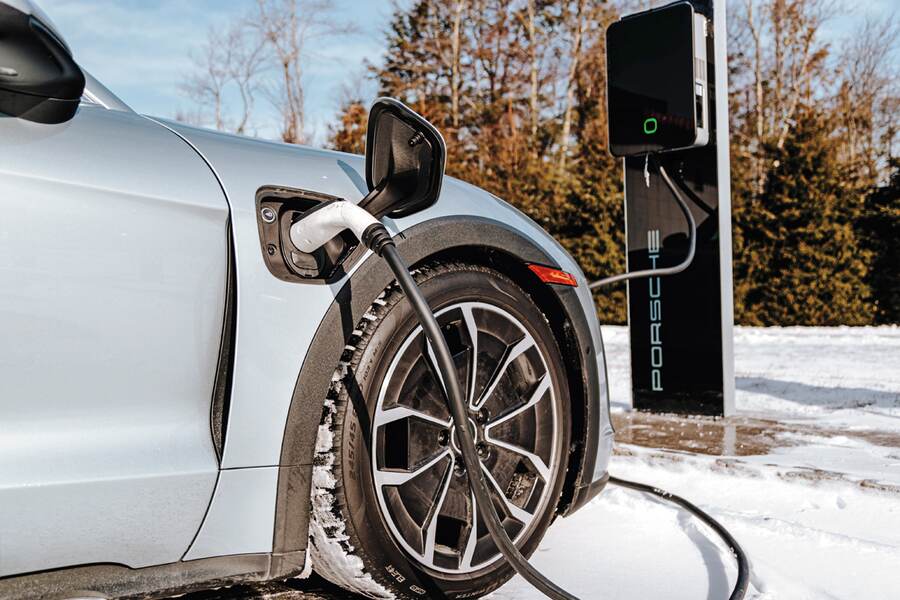 Versus the Taycan sedan, the Cross Turismo has a body that rides 0.8-inches higher and nether regions wrapped in SUV-style body cladding. A standard glass panoramic roof does its best to counter Seasonal Affective Disorder. A high-opening liftgate and roomy hatch afford easy stowage of skis or other longer items while keeping messy gear out of the screen-centric cabin.

To demonstrate, we pack a parka and thermos and set course to Monticello Motor Club in New York’s Catskills region. Monticello’s road course consists of 4.1 miles and 22 turns. The Motor Club also offers a 300 acres of off-road trails, a new RallyCross track, and a rally school.

Our nutty plan? Drive the Porsche 110 miles from Brooklyn to this winter playground, lap it, charge it, and rock it home again. To keep its shiny, Dolomite-Silver-side up, our Porsche is shod with Pirelli P Zero winter tires, including 285/40/R20s at the rear. Good thing, too: We arrive to find a hockey rink where the track used to be, coated from a recent ice storm, frosted with a devilish crust of snow. 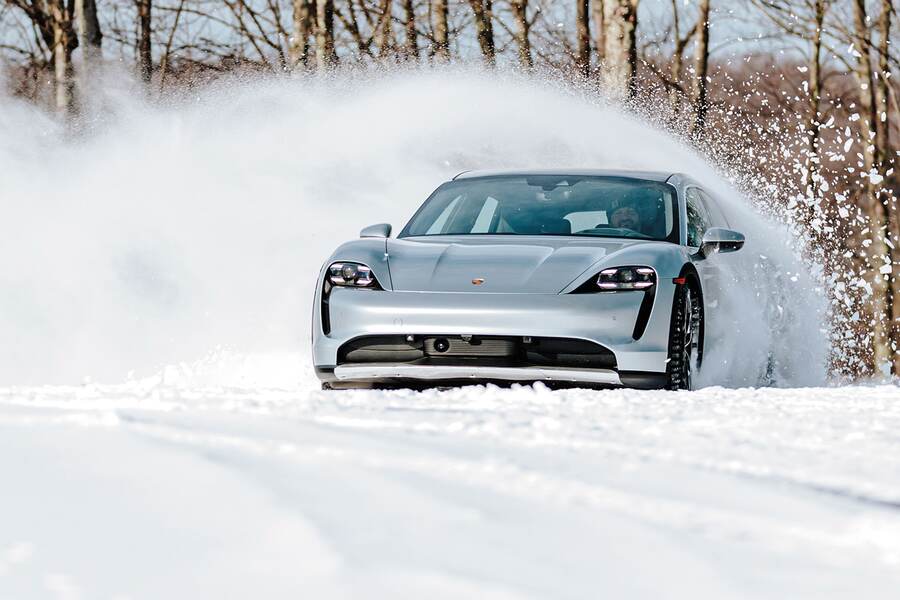 Our Taycan 4S Cross Turismo tackles this forbidding surface with 482 horsepower from a pair of permanent-magnet motors. A Launch Control start gooses that to 562 horsepower. With 479 pound-feet of light-switch torque, the Porsche jolts to 60 mph in 3.9 seconds, through a quarter-mile in 12.2 seconds, and to a 149-mph peak. Of course, this 4S won’t melt faces like Cross Turismo Turbos, including a Turbo S that maxes out at 750 horsepower and blitzes 60 mph in 2.7 seconds. But it’s still fantasyland for a wagon, let alone a 2.5-ton Porsche that leaves internal-combustion cars wheezing every time I squeeze the throttle.

This end of the Catskills saw a high temperature of 7.0 degrees the previous day, enough to freeze Rip Van Winkle’s long johns. Today it’s nudging 20 degrees. Yet the Taycan’s sophisticated battery thermal management, improved in this 2022 Cross Turismo, is already paying off: The bitter weather seems to ding the official 215-mile EPA driving range by only about five percent. (Not counting the track run, which naturally bleeds the battery like opening an electric vein).

The Taycan can’t touch the range of a Tesla Model S, let alone the record-setting 520 miles of the impressive, Arizona-built Lucid Air. That includes the Cross Turismo’s meager U.S. Environmental Protection Agency (EPA) rating of 76 mpge, compared with 121 mpge for a Model S Long Range, and a class-best 131 mpge for the most efficient Lucid. But, to its credit, the Taycan has proven an ability to top EPA estimates in more-favorable conditions and maintain surprising stamina during bouts of spirited driving. But on my opening cruise to Monticello, even when I baby the throttle like Auntie Prius, skip seat heat, and keep the cabin at 68 degrees, I’m on pace for about 200 miles. Cold definitely matters. 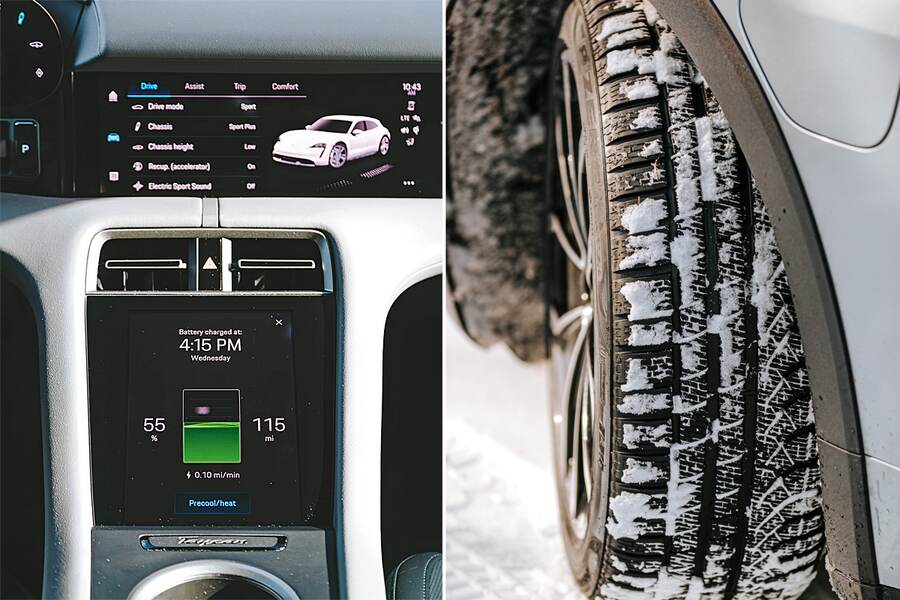 Helping make the best of conditions is Chris Duplessis, the 2012 Rally America 2WD Champion and Monticello’s aptly named “Director of Fun”. Today’s off-road hijinks involve some track members’ latest obsession: Cross Karts. These single-seat, Spanish buzz bombs combine 150 horsepower (from a 750 cc Suzuki GSX-R motorcycle engine) with a mass of just 750 pounds. Subtract its 1,389-pound battery, and the electric Porsche still wouldn’t touch that power-to-weight ratio. But that doesn’t stop us from taking a few Taycan laps on the tight Rally X course, careful not to gouge deep ruts and spoil the surface for the karting crew.

First, I punch up Gravel Mode on the center touchscreen. That lifts the Porsche to the tallest of five ride heights, exposing huge wheel-arch gaps that make onlookers chuckle. What is this, a Subaru? In that setting, Porsche Torque Vectoring simulates a locking center differential, striving to keep the front and rear axles churning at the same speed. Porsche Active Suspension Management stiffens to keep wheels on the ground, and stability control lets the wheels generate some inertia to dig through dirt, snow, or mud. The two-speed transmission, rare among mainly single-speed EVs, holds first gear longer to ensure ready torque. A gentler throttle map offers more precise control over bumps and obstacles.

We head to the deserted North Course of the road-racing circuit and go for a rip. Minus the grippy Pirellis, this would be folly on ice. But with its dedicated winter rubber, lifted body, and all systems go, the Porsche pirouettes around the track with sure-footed grace. This muscle wagon would carve circles around most any SUV in the snow, as long as it’s not too deep. 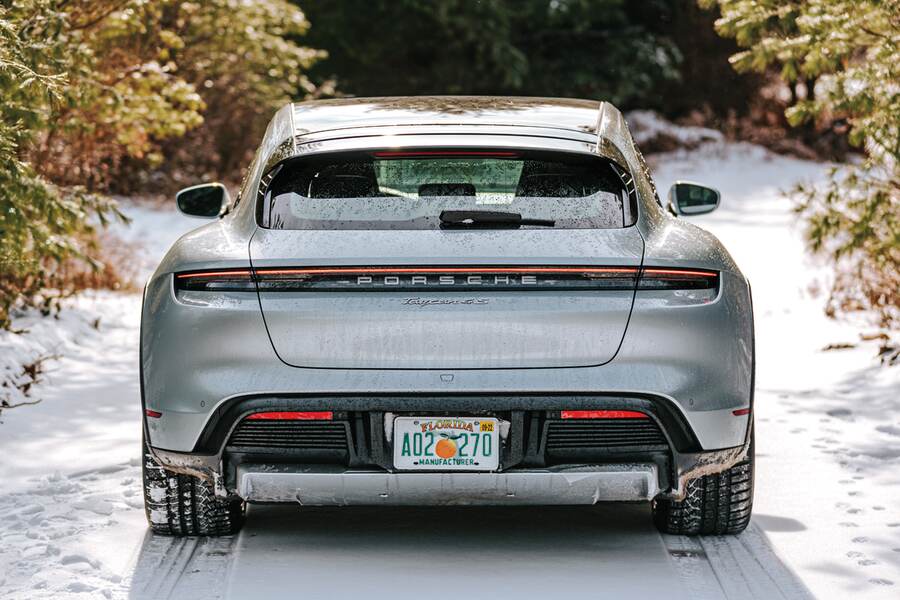 Duplessis, as ever, can’t resist a stint behind the wheel. The former rally pro shows us how it’s done, holding the Taycan sideways through ridiculous power slides, kicking up snow roostertails like a run-amok St. Nick.

Our winter festival of idiocy accomplished, it’s time to tackle the pavement that will concern most Taycan owners. The roads surrounding Monticello are an enthusiast’s delight, including Route 102 as it flows along the Neversink River. And despite a concerning patina of salt and frost on the asphalt and a snowy forest on either side, the Taycan practically says “I got this” in that reassuring voice any Porsche fan will recognize. The Cross Turismo’s raised ride height is definitely apparent from behind the wheel, with a touch more crossover-style lean into fast corners. But that low-mounted battery still tethers this Taycan to the surface at a decidedly Porsche pace.

And even with fresh competition, including from the hugely impressive Lucid, no EV steers or handles quite this well—not even the Taycan’s kissing cousin, the Audi RS e-Tron GT. 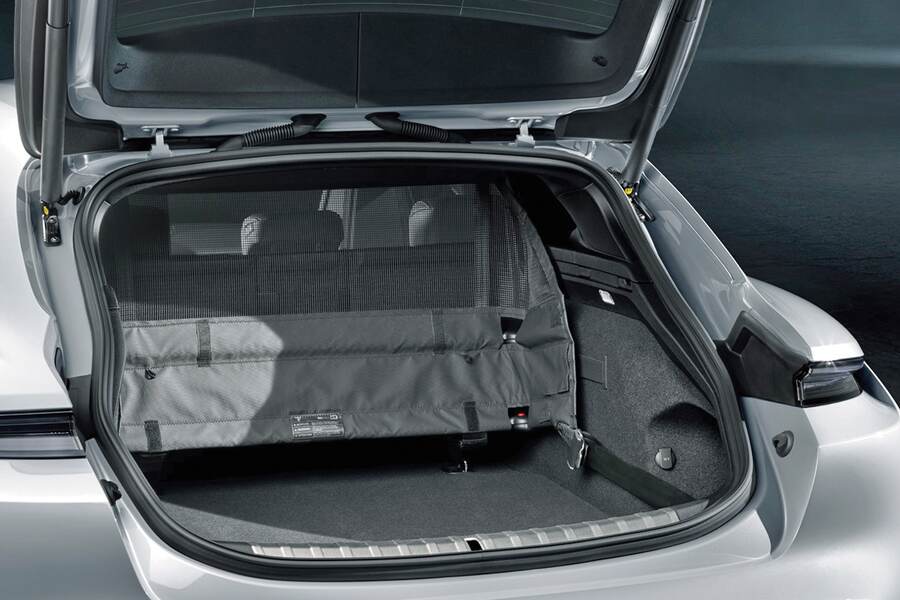 Because the Porsche makes speed so silently, providing fewer clues to its often-breakneck pace, mighty brakes are a must. Stoppers here include the optional Porsche Surface Coated Brakes (for $3,490) that debuted in the Cayenne Turbo. Their rotors are coated in nearly diamond-hard tungsten carbide that won’t rust and produces virtually no brake dust. Those brakes, including white six-piston fixed calipers up front, boost standard disc diameter to a respective 410 and 365 mm (16.1 and 14.4 in.) front-and-rear. Unfortunately, this Taycan’s dowdy, 20-inch Turbo Design wheels seem less worth a $2,770 upcharge. Fortunately, Porsche offers more-attractive wheel options.

Even with its (mild) brake recuperation activated, the Taycan still doesn’t allow the one-pedal driving many EV owners swear by, whether in city driving or fast corner-to-corner action allowed by, say, the Lucid. Instead, Porsche prefers drivers to use the brake pedal themselves.

With not enough juice for the run back to Brooklyn, I detour from the wilds to a Walmart Supercenter in Newburgh, where a 350-kilowatt oasis from Electrify America awaited. This was my first fill-up in America on a 350-kW DC charger, the first having come in early 2020, off the German Autobahn in a Taycan sedan. Even now, few EVs aside from the Porsche, with its 800-volt architecture, can accept a full jolt from these 350-kW electric Frankensteins. The Lucid is one. Surprisingly, the new Hyundai Ioniq 5 crossover is another. 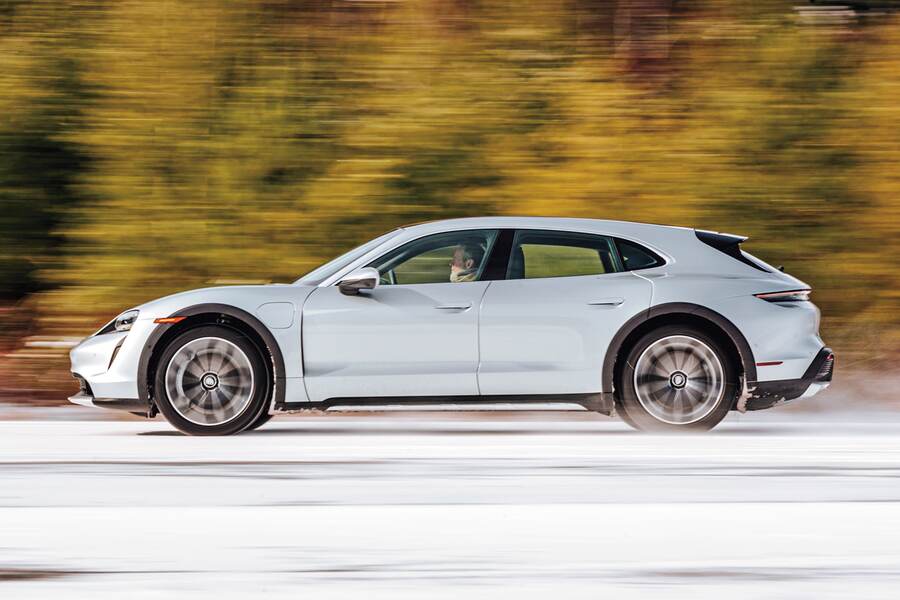 After hooking up via the Porsche Connect smartphone app—it lets owners find stations, monitor charges, or schedule charging and climate pre-conditioning—I settle into the ventilated front seats (an $850 option) to peruse my slate-gray surroundings.

The Porsche Active Cockpit features a screen that curls before the driver, a pair of stacked center displays, and the signature passenger touchscreen. That shotgun screen is part of a $4,940 Technology Package that bundles a head-up display and an automated parking function. An optional, $1,200 Bose audio system kicks out “Be My Baby” via Spotify, with the girl-group pioneer Ronnie Spector having died that day. (A pricier 21-speaker, 1,455-watt Burmester surround-sound unit is more encore-worthy).

The sixth generation of Porsche Communication Management infotainment is the brand’s best bid yet to keep up with the digital Joneses. But it’s already feeling dated. That includes tricky menus, tiny icons that are hard to get a fix on in motion, and a laggy screen. Yet the system integrates useful voice commands and multifarious functions, from performance settings to the semi-autonomous helpers of Porsche’s InnoDrive.

While I run numbers inside, the numbers outside say this particular charger is pushing just 150 kilowatts versus the roughly 270 kilowatts I experienced in Germany. Cold weather is a likely culprit for the slower flow. Still, the battery slurps juice at the heady rate of 6.5-miles per minute before ramping down as the battery passes 80-percent full. I had pulled in with a 23-percent charge and an estimated 45 miles of remaining range. Over 40 minutes, the Porsche’s state-of-charge readout, displayed on both the app and its flying-bridge screen, rises to 98 percent and 210 miles.

With car and driver replenished, and less than 100 miles to Brooklyn, I no longer have to worry about light-footing it. Instead, a homeward romp on the winding Sawmill Parkway lets the Taycan crackle with its otherworldly skills. Forget the wood-paneled wagon jokes, the Griswolds, and Brady Bunches. If this future-friendly Taycan is a station wagon, sign me up. 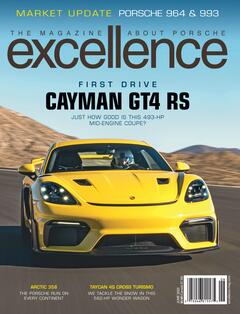