The 2021 Taycan 4 Cross Turismo might be the best value in the Porsche lineup. 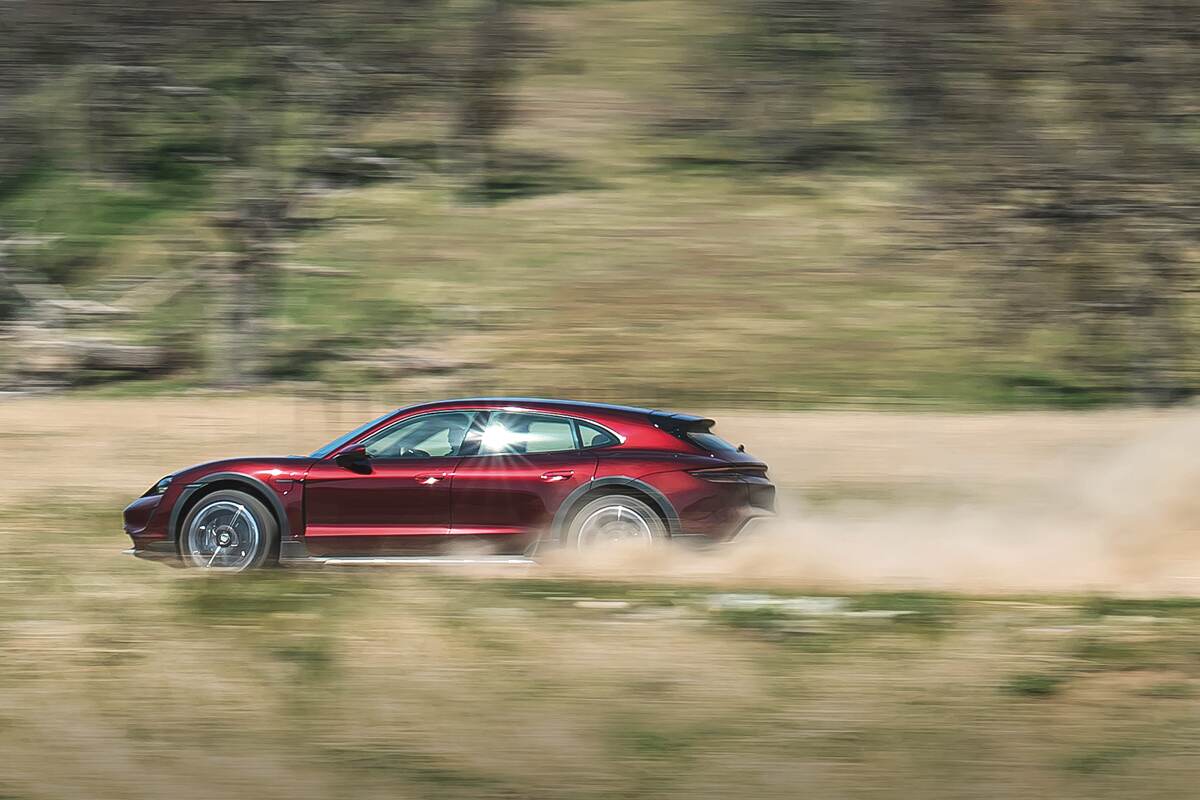 The new-for-2021 Cross Turismo flavor of the Taycan clocks in at $90,900 plus $1,350 delivery, a cool $11,000 more than the base price for the rear-wheel-drive Taycan—hardly the makings of a sweet deal, right? Yet the Cross Turismo comes with a great deal more standard equipment, including two-motor all-wheel-drive, the upgraded 93.4-kWh Performance Battery Plus, Porsche Active Suspension Management (PASM) adaptive air suspension, a new Gravel drive mode, a standard panoramic sunroof, more headroom front and rear, and, of course, the added ride height and extended space and practicality of the wagon body style.

In total, the extra options fitted more than make up for the price difference between the Taycan 4 Cross Turismo and its sedan counterpart, making this potentially the best value variant you can buy. While its EPA range of 215 miles may concern some, its real-world range of about 280 miles puts it on par with its close competitors. In terms of practicality, its extra cabin space translates to 0.35 inches of more headroom up front, 3.6 inches more headroom in the second row, and up to 15.7 cubic feet with the rear seats up or 42.8 cubic feet with the seats laid flat.

Getting more for your money is great, but only if it’s worth that money in the first place. As you’d expect, the Taycan 4 Cross Turismo is merely the entry point to the new Taycan Cross Turismo range; 4S, Turbo, and Turbo S models are coming, too. In Taycan 4 form, the new Cross Turismo rates 375 horsepower (469 hp in Overboost with Launch Control) and 368 lb-ft of torque from its dual-motor all-wheel-drive system, making it more than quick enough for most drivers at 4.8 seconds to 60 mph, according to Porsche. The Taycan 4 Cross Turismo’s top speed is 136 mph. 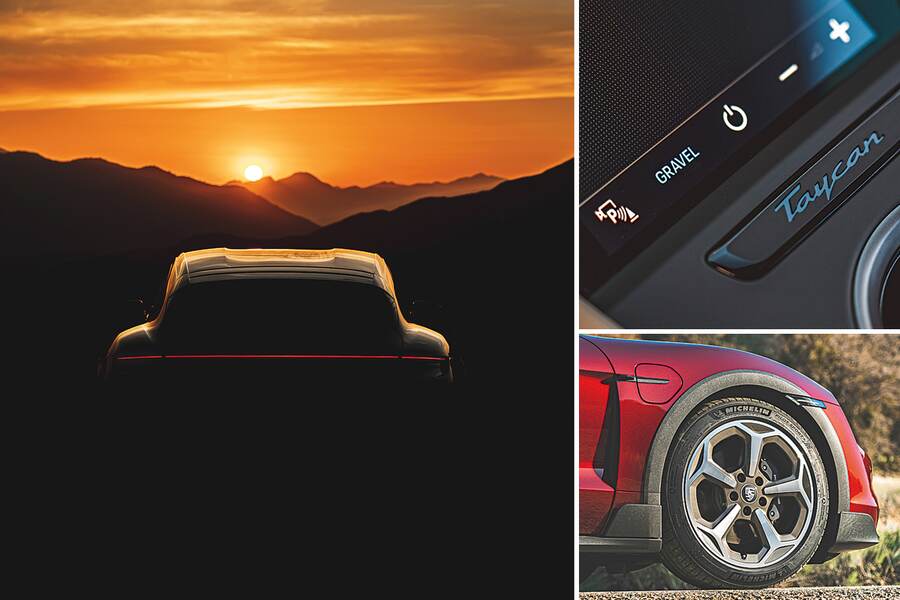 Opt for the Offroad Design Package like the car I tested, and you’ll get a 10 mm (0.4 in.) higher initial ride height than an unequipped Taycan Cross Turismo, though all Cross Turismos ride at 20 mm (0.8 in.) higher than their sedan counterparts by default. Thanks to the PASM adaptive air suspension, the ride height can adjust to suit the driving mode (Normal, Gravel, Sport, and, if Sport Chrono is selected, Sport Plus).

New for the Taycan Cross Turismo, and standard on all variants, is Porsche’s Gravel mode. The new drive mode isn’t selected with the usual Normal/Sport/Sport Plus selector on the steering wheel but through the center console. What does Gravel mode do? It optimizes traction, yaw, and suspension settings to adaptively improve performance in a low-friction environment—much like snow or ice modes.

My time with the newest electric Porsche was limited to the wheel of the Taycan 4 Cross Turismo rather than the Turbo that was also on hand for the international launch—and it was there, driving from the gritty streets of Glendale to the fresh air atop the mountains near Big Bear that I realized I may have gotten the better end of the bargain. 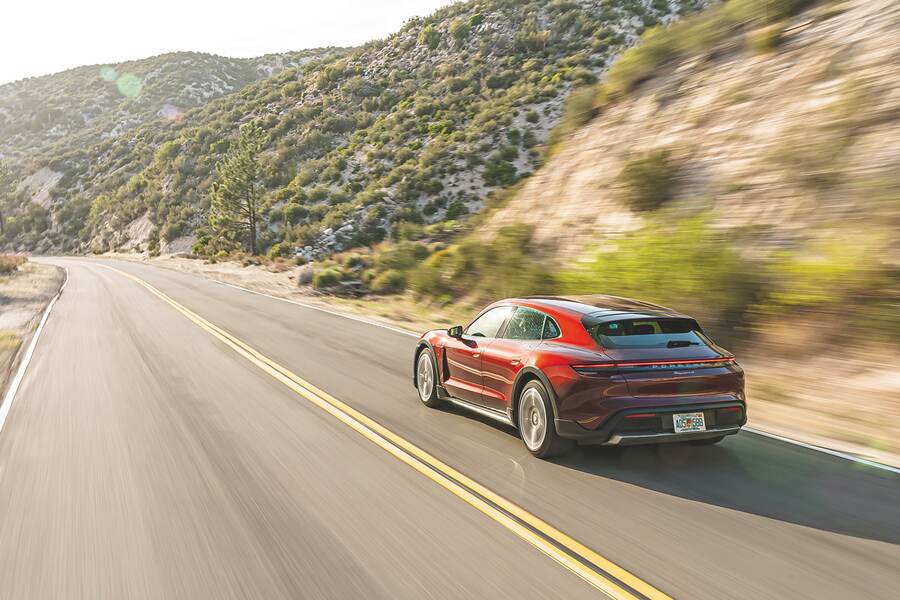 Sure, the Taycan Turbo Cross Turismo is no doubt every bit as good as the 4 and quite possibly better by dint of being quicker and more powerful. But the Turbo is also priced like a vehicle that ought to be darned good at just about everything; its starting price is nearly double that of the Taycan 4 Cross Turismo! Again, while the Turbo certainly justifies its price with its performance and style, you get a lot more than half of the Turbo’s bang for not much more than half the bucks. That’s value.

Even if it weren’t a screaming bargain, however, the 2021 Taycan 4 Cross Turismo would still be one of the best cars on the market. As comfortable as the Taycan sedan is in its many forms, the Cross Turismo’s slightly higher ride height and slightly different suspension tuning and rear subframe bushings make for an even plusher ride. Don’t worry, that plushness doesn’t translate to any appreciable loss of its sporting edge; twist the knob to Sport Plus and the Taycan 4 Cross Turismo will turn whatever is in the right lane into a tiny dot in the rearview mirror in a handful of seconds.

When the road requires more agility than sheer power, the Taycan’s brilliant steering feel and minimal body roll (thanks to the low-slung center of gravity enabled by the battery-electric architecture) let the roomy wagon dance like a coupe. Even on the brakes, regen doing its best to convert heat motion back into electricity, the Taycan 4 Cross Turismo’s 5,029-lb curb weight seems like a typo; it doesn’t feel like it weighs an ounce more than 3,500. 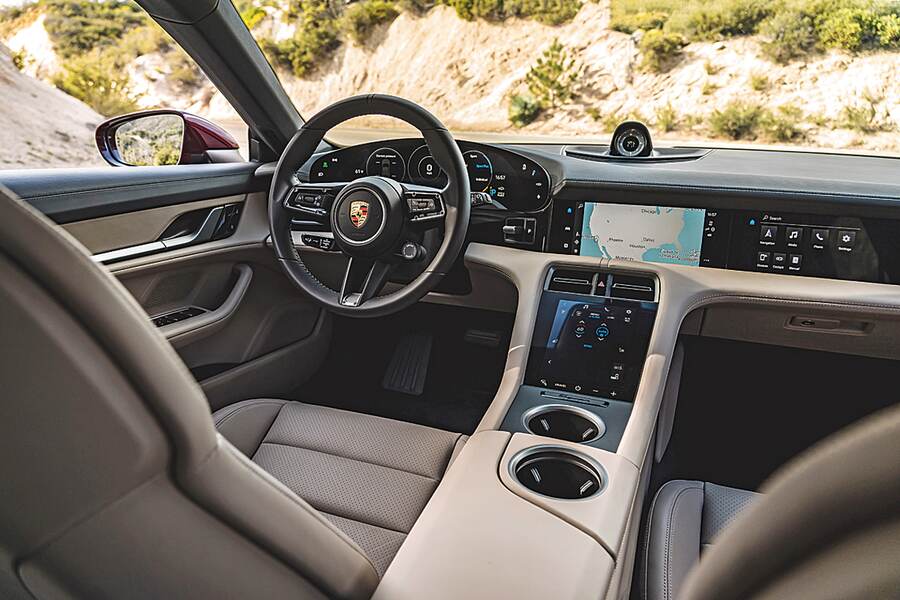 If you can’t tell, I rather enjoyed my day bombing around the freeways, hills, and valleys of the northern Greater Los Angeles area, because the Taycan 4 Cross Turismo is, first, a Taycan, and second, an even better Taycan! How so? Because even though it has more room for people and things, as well as a bit of unpaved road ability, it’s still just as fun on a good road, just as serene on the highway, and just as easy a companion in traffic.

The Taycan 4 Cross Turismo’s combination of value, ability, style, and sheer enjoyment for the driver makes it a remarkable buy even among Porsche’s stellar lineup and quite possibly the best all-around electric car value at any price. 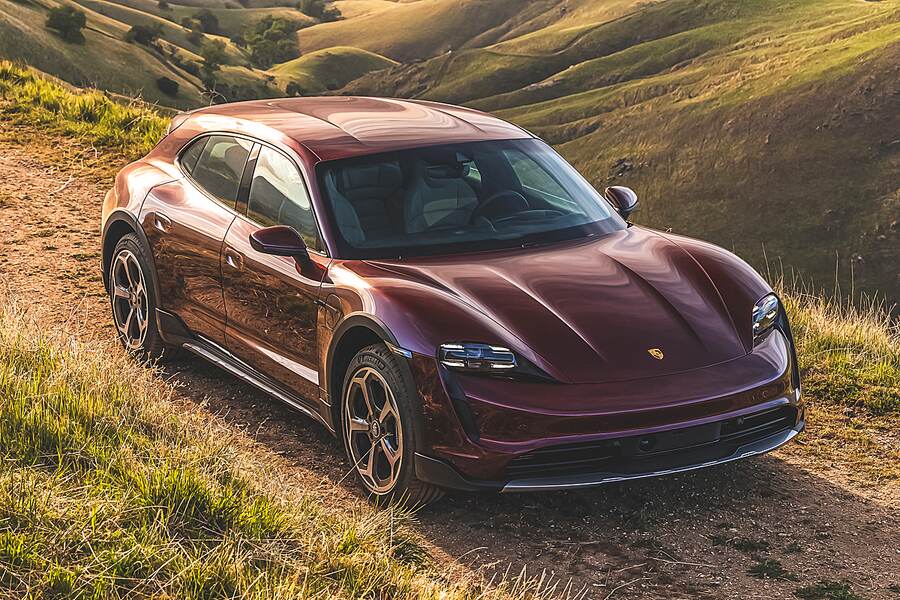 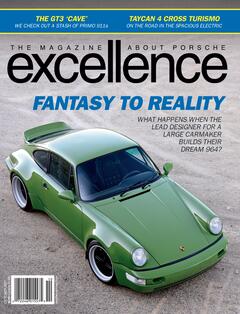