A Day in the Life

The new base Taycan is a base model in name only. 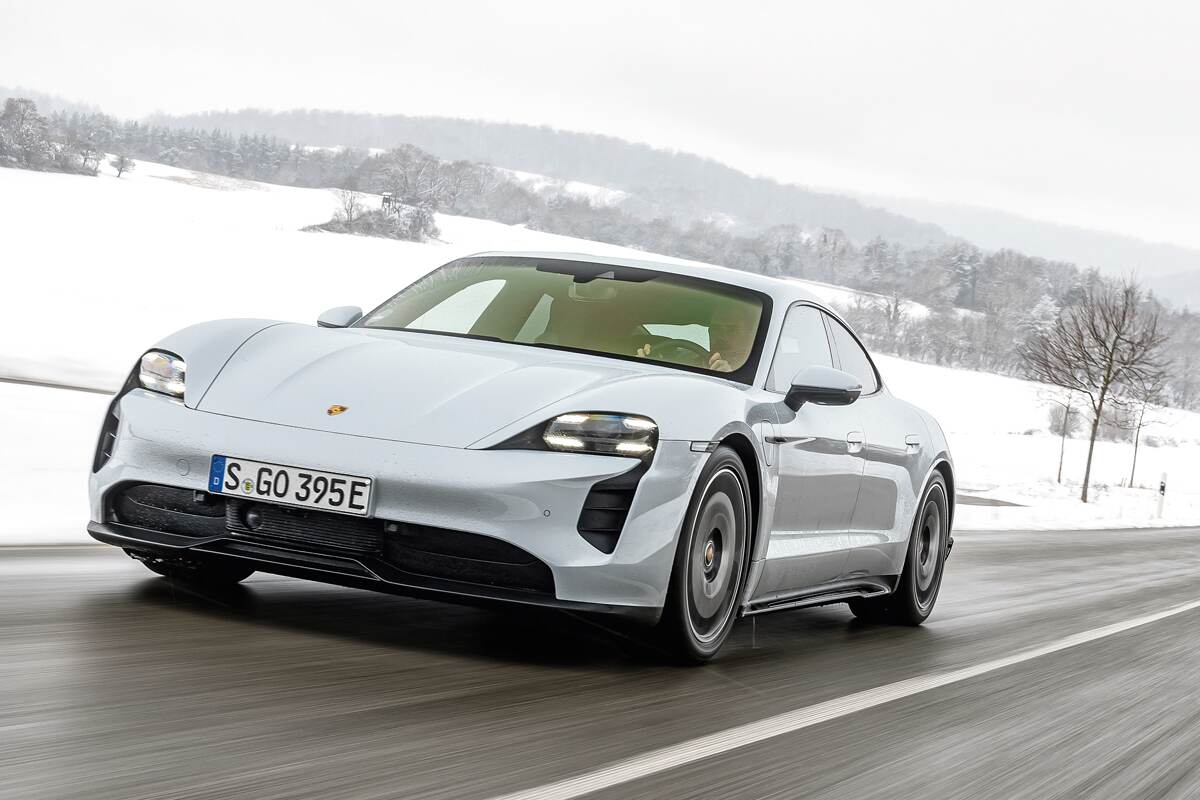 It’s no secret that driving has become a real chore in cities and their seemingly ever-expanding, contiguous sea of suburbs. Such a chore, in fact, that pretty much everyone is waiting at the edge of their seat for the arrival of the self-driving cars so we can, at the least, finally disengage and tune out of the daily driving grind, even if we still have to be stuck in it. If you’re skeptical of that mindset, the Porsche Taycan is its antithesis. Even in base form, it will have you coming up with excuses to hit the streets—yes, even the ordinary ones—with no intention of even touching the (very good, adaptive) cruise control.

If you’re not yet familiar with Porsche’s most affordable Taycan, here’s the rundown. It’s rear-wheel-drive only, but it still packs the same two-speed transmission found in the higher-spec Taycan 4S, Turbo, and Turbo S. The standard Performance Battery pack is a 79.2-kWh unit capable of fast-charging at up to 225 kW and delivering 402 hp and 254 lb-ft of torque from the single rear-mounted electric motor. For a 170-lb penalty, the Performance Battery Plus offers 93.4 kWh of power storage and up to 270 kW charging, as well as 67 more peak horsepower, bringing the larger pack’s tally to 469 hp and 263 lb-ft.

Despite the differing power figures of the two battery pack configurations, both variants produce the same result: Zero to 60 mph in 5.1 seconds and a maximum speed of 143 mph. The Performance Battery Plus does have a slight real-world performance advantage, though: Porsche says the bigger pack saves 0.2 seconds in a quarter-mile drag race, coming in at 13.5 seconds to the smaller pack’s 13.7 seconds, meaning it’s a 67-hp smidge quicker in the 60-mph-plus range. 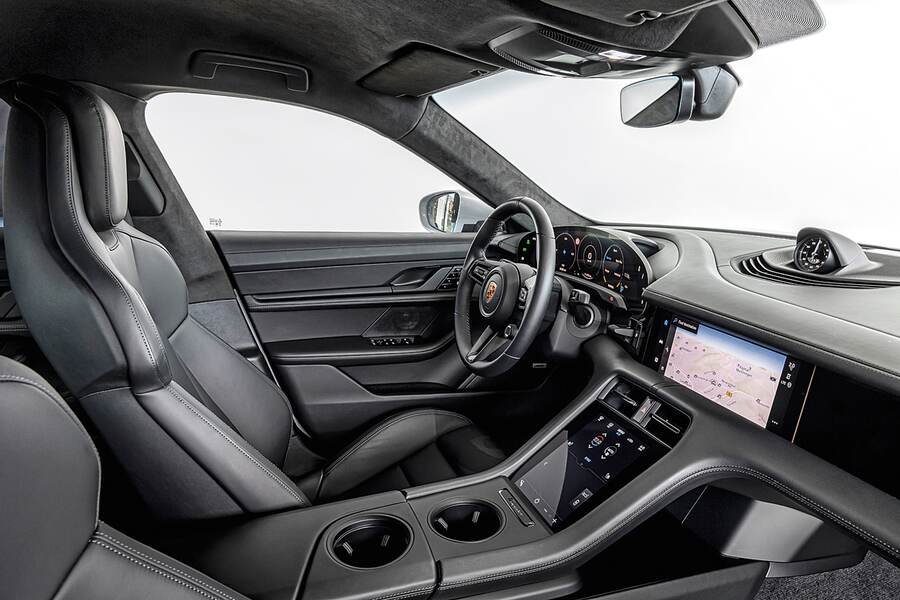 The German-market Taycan I drove was fitted with so many options that it is no longer priced as a base model (Porsche has yet to disclose full U.S. pricing details), despite nominally being one. Among the more salient options as tested: The larger battery pack, a Porsche Active Suspension Management (PASM) air suspension, Porsche Torque Vectoring Plus, the Sport Chrono Package, the Porsche Dynamic Light System Plus with matrix headlights, Head-Up Display, Active Parking Support, InnoDrive with Adaptive Cruise Control, 18-way Adaptive Sport Seats, a Bose Surround Sound system, and a whole host of comfort, convenience, and appearance tweaks. So, yeah, a BINO—Base In Name Only.

You might expect to be a bit underwhelmed with the base-model Taycan, even with the bigger battery pack and 469 hp on tap. After all, that torque figure is pretty puny for an EV, right? Yes, but also no: The two-speed transmission makes up the difference, letting the Taycan pull hard off the line and keep pulling until your nerve runs out, the road runs out, or you’ve hit 143 mph.

The Taycan’s acceleration is especially impressive when you take its rear-drive configuration and rather significant curb weight into account. Despite only having one motor instead of two, like the Taycan 4S, our 4,752-lb base model with the bigger battery tips the scales just 29 lbs lighter than the standard 4S. 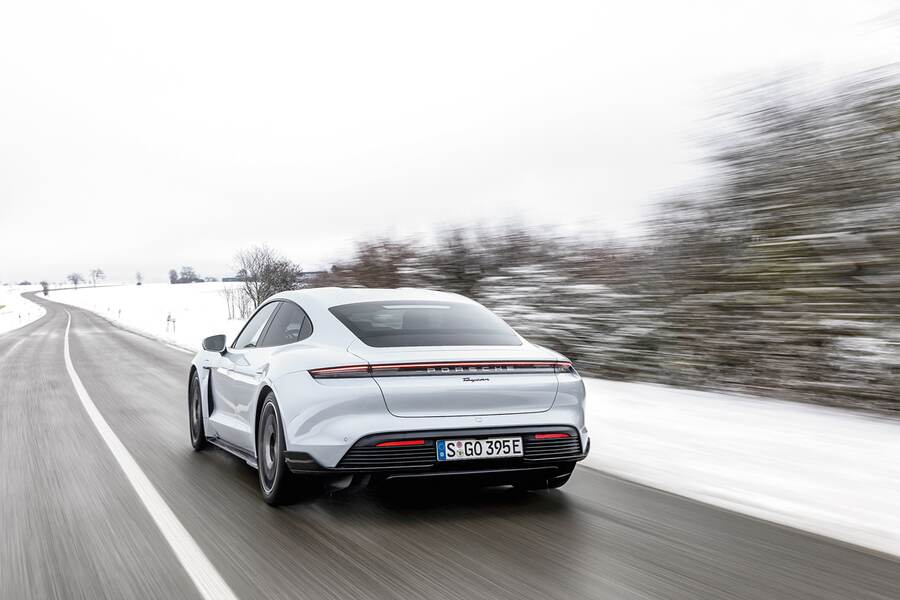 Thankfully, just as it accelerates like a much lighter car, the Taycan also rides and handles like it’s much lighter than it is, too. Even the brakes (Porsche’s high-tech surface-coated discs providing plenty of bite) seem to put the lie to the curb weight. The only driver-apparent side-effect of the heft was a tendency to hit sharper road conditions harder than expected given the otherwise plush, controlled ride. The reality of 20-inch wheels and a two-ton-plus curb weight cannot be denied, even by the wizardry of PASM. Once you know, however, it’s a joy to use the Taycan’s precise, tactile, yet un-busy steering to maneuver around the worst of the potholes, ripples, and dips that litter the surface streets and highways.

Handling, of course, is a Porsche hallmark, and the Taycan’s EV nature lends itself beautifully to maximizing its lateral performance. The battery pack’s heft, while an ever-present penalty compared to a gasoline-powered car, is also an advantage due to its effect on the center of gravity, which is much lower than it would be with a traditional internal combustion engine and transaxle. That translates to minimal body roll, and with the help of PASM adaptive air dampers and Porsche Torque Vectoring Plus, the Taycan is ready to dance the moment you spin the steering-wheel-mounted Drive Mode knob to Sport or Sport Plus. For the connoisseurs, Individual mode will allow you to tailor your preferred behavior for the Taycan’s damping, powertrain, and more.

The cabin, as it should be, is also a fantastic commute space, with comfy yet supportive seats front and rear. From the excellent materials throughout the cabin to the quick-responding, beautifully lit trio of screens in the instrument panel, center dashboard, and center console, there’s a marriage of what’s now and what’s next, a high-tech reinterpretation of styles, themes, and mechanisms we’ve already grown to love in Porsche’s petrochemical-powered posse. The learning curve for those already familiar with modern Porsches isn’t very steep, and the Taycan/EV-specific functions are added in obvious, easy-to-use menus. 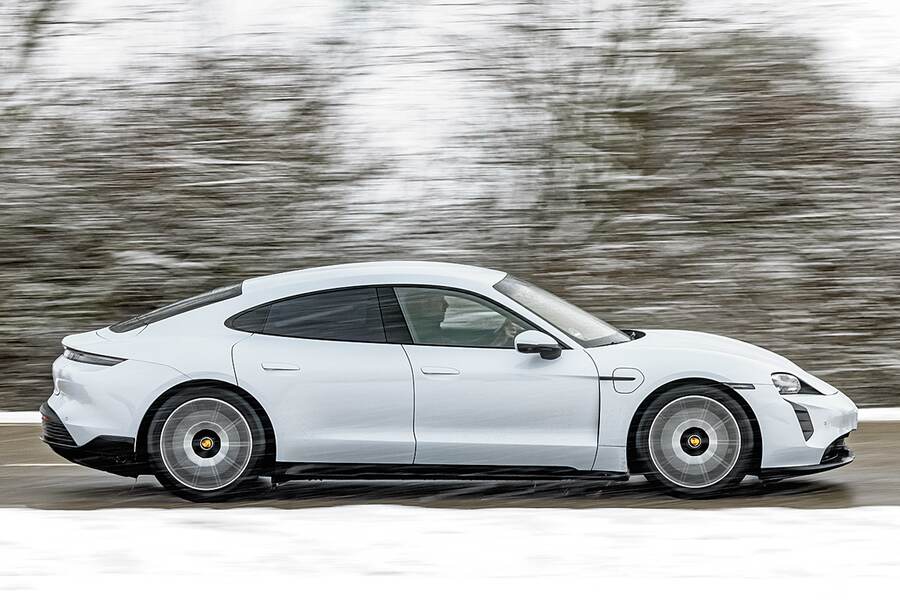 Whether you plan to use it as the ultimate suburb-to-city commuter, a fantastic highway getaway cruiser, or a sporty weekend toy, you’ll find what you’re looking for in the Taycan.

I’ll state it plainly: There is no better all-around mass-produced electric car than the Taycan family, including the base model. I’ve driven the full Taycan lineup as well as most of the alternatives, and sure, some can go farther on a charge, many are less expensive, and a few are even faster or quicker; overall, most are great cars. But none are as well-rounded in range, pace, comfort, style, and quality as the Taycan—whichever one you choose.

How can it be that Porsche’s first foray into the standard-production pure electric world so immensely outclasses brands that have been at it for as much as a decade? Bluntly, because this isn’t Porsche’s first car, let alone its first performance or luxury car. The Taycan is fantastically familiar in every way it should be, exuding Porsche’s decades of sports car-building experience even as it pushes beyond. It’s a Porsche made electric just the way you hoped it would be. And for me, at least, the Taycan is the antidote to the poison of modern city traffic. 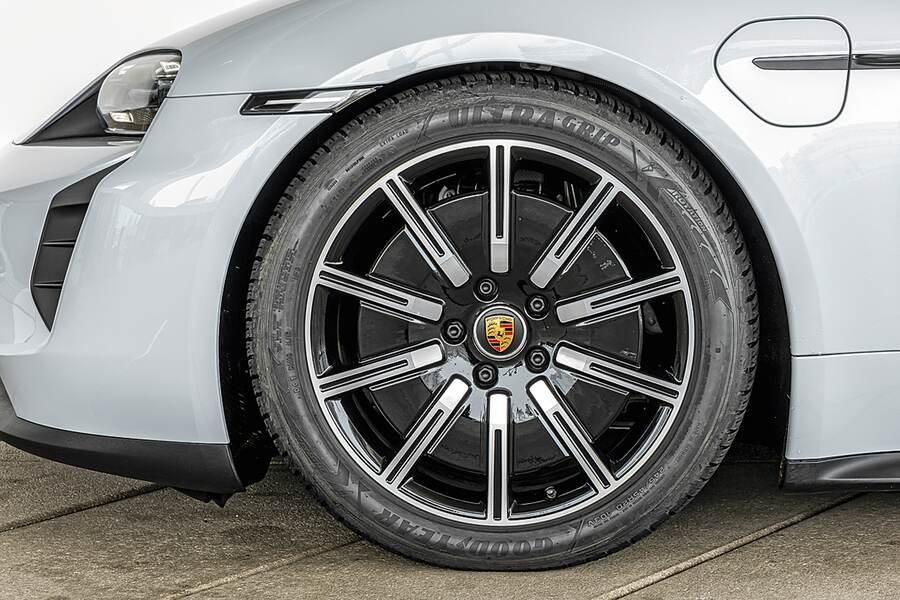 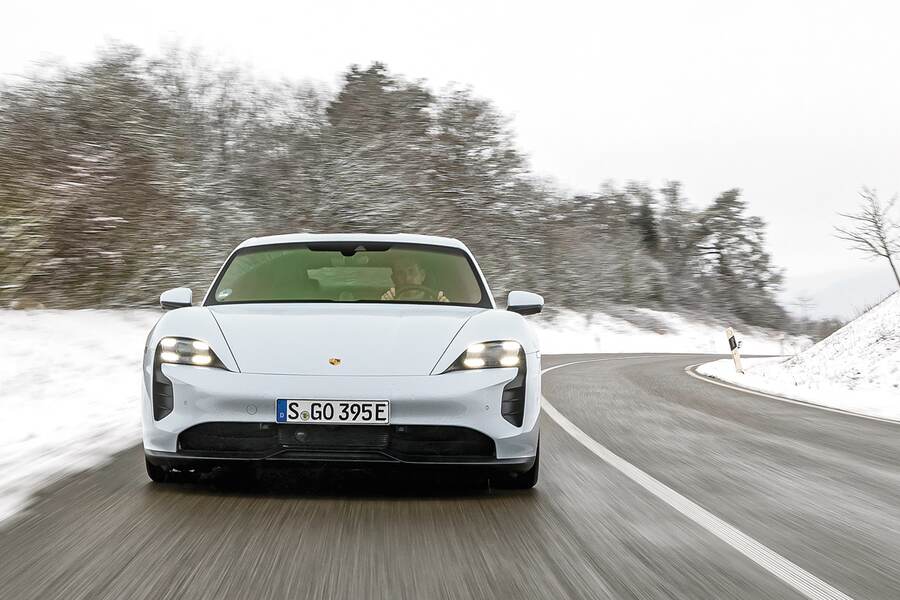 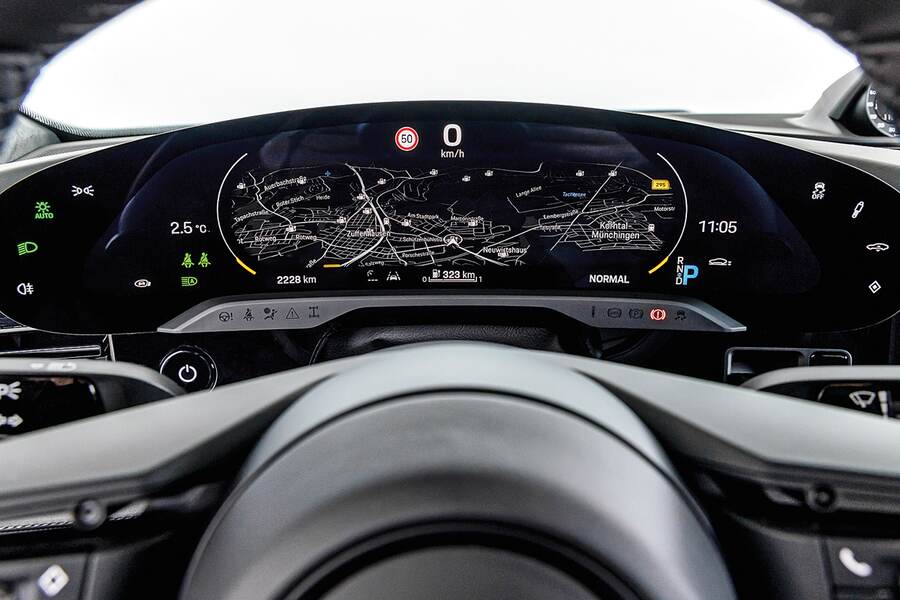 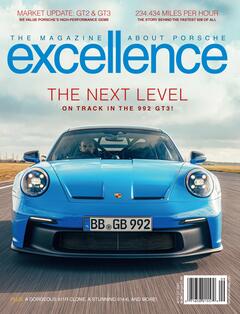