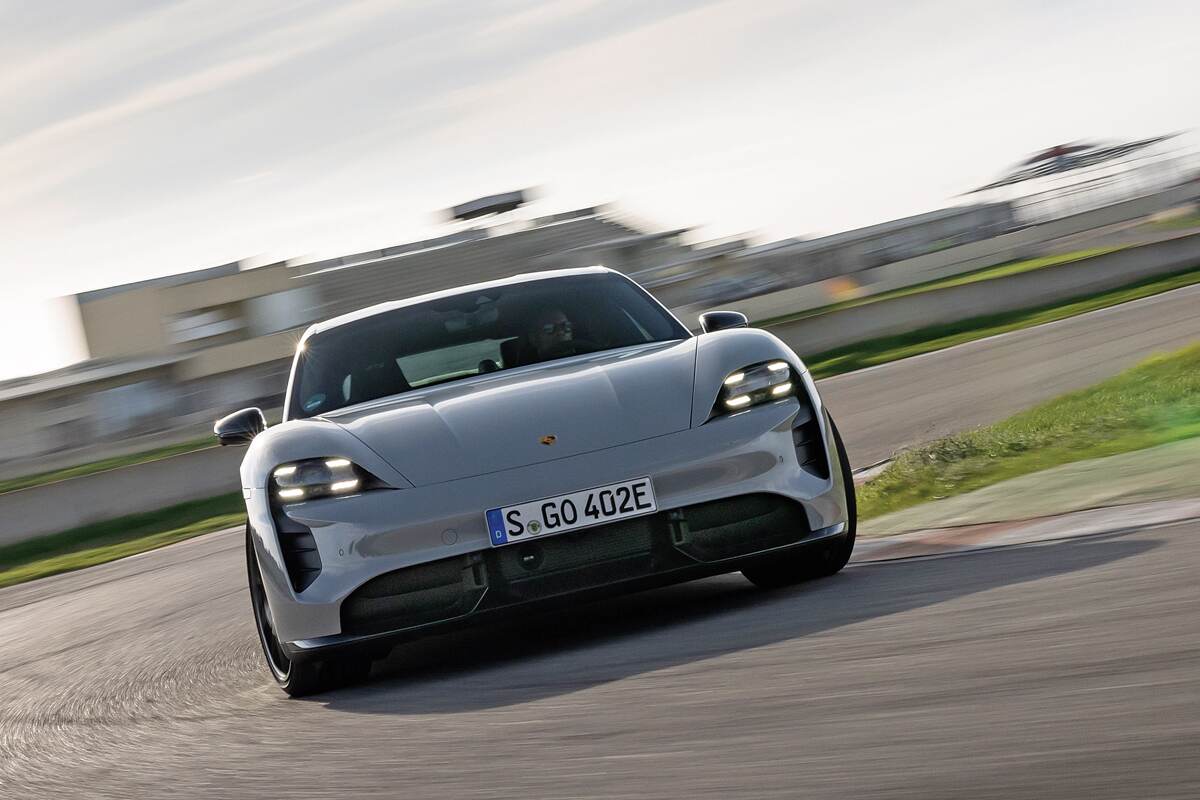 Ordering a custom Porsche is, for those fortunate enough to experience it, one of life’s great pleasures—not unlike sitting down to dinner at a Michelin-starred restaurant. Ordering a Porsche with the GTS badge is a bit more like sitting down at a Michelin-starred sushi counter and saying to the chef, “Omakase”—Japanese for (more or less) “I’ll leave it up to you.” There’s still an element of individualization to choosing your perfect GTS, but the GTS-ness is Porsche’s doing.

Where the Taycan Turbo and Turbo S are at-the-bleeding-limit (but still luxurious) electric performance sedans, and the rear-drive and 4/4S specs are sporty and all-weather biased, respectively, the Taycan GTS seems like it aims to achieve as much of the Turbo’s performance as possible without sacrificing any of the comfort and civility of a 4S, all with a price that’s not quite stratospheric.

The Taycan GTS “Omakase” experience starts from the very core: The same front motors are used across every all-wheel-drive Taycans, but the rear motors vary, with the Turbo and Turbo S getting a larger rear motor than the rest of the range, the better to handle the power and the heat generated. The GTS’ motor is closer to the one found in the Turbo models, featuring the same diameter, but a slightly shorter overall length. The result is up to 590 horsepower when “overboosting” for launch control; standard maximum power output is 509 horsepower. 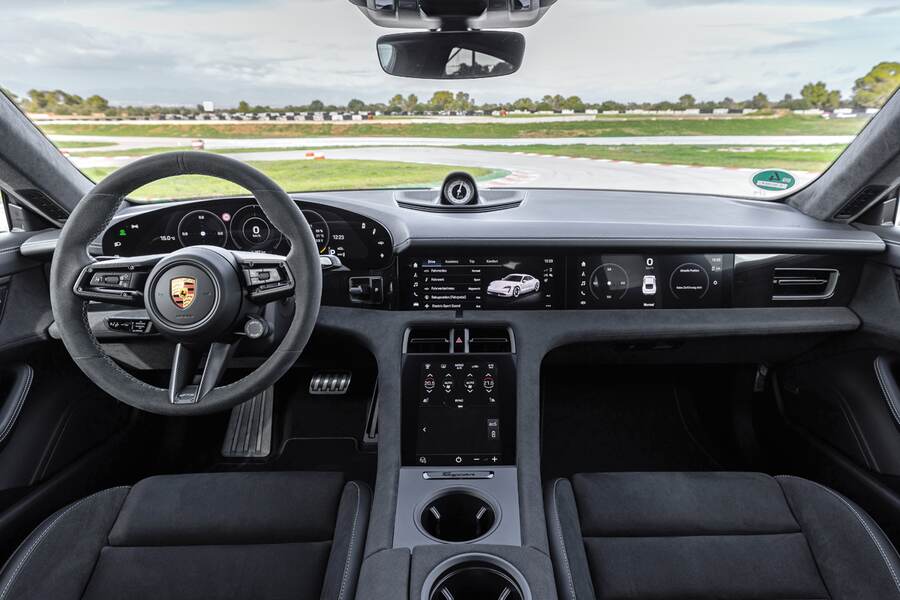 The interior of the GTS is largely covered in a micro-suede fabric that looks and feels very race-inspired, much like the comfy, well-bolstered seats.

The 800-volt, 270-kW-charging-capable Performance Battery Plus pack is also standard in the GTS, with 93.4 kWh of energy storage. A two-speed rear motor transmission and single-speed front motor transmission send power separately to both front and rear axles. While all of these components are tuned specifically for the GTS, it’s the suspension setup and tuning that really sets it apart.

All GTS models get standard Porsche Active Suspension Management (PASM), Porsche Traction Management (PTM), and Porsche Torque Vectoring Plus (PTV Plus). The PASM system also gets GTS-specific tuning, and while Porsche wouldn’t go into to much detail about what separates the GTS’ tune from that of the Turbo or of the 4S and its ilk, the special sauce seems to be, in inimitable Porsche style, not so much what was done but how it was done. Whatever the ingredients, however, the result is delectable.

The necessary foil to any high-performance car’s go-fast repertoire is braking; think of it as the gari between pieces of hand-crafted sushi, cleansing the palate and resetting for what’s next. The Taycan GTS, fortunately, is also gifted in this regard, giving you the choice of 390 mm (15.35 in.) front and 358 mm (14.1 in.) rear cast-iron internally ventilated rotors clamped by six-piston front and four-piston rear calipers, or the pricey ($9,080) but effective 420 mm (16.5 in.) front and 410 mm (16.1 in.) back Porsche Ceramic Composite Brakes (PCCBs) squeezed by 10-piston front and four-piston rear calipers. 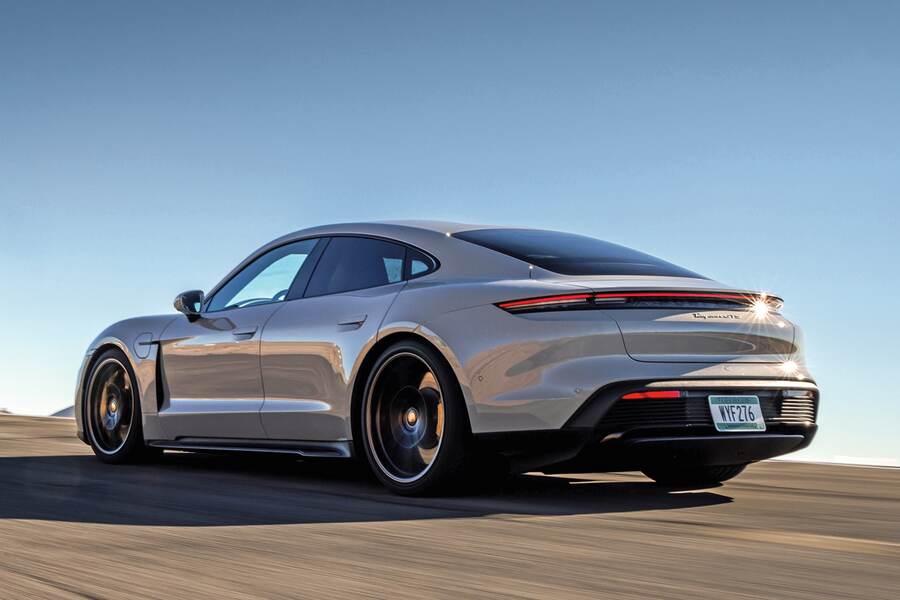 While self-driving systems may be found in a modern driver’s car, in a Porsche, they might seem a bit out of place; nevertheless, in a car meant to travel long distances comfortably, such systems are welcome. Balancing this reality just like it does so many others, the Taycan GTS includes lane-keeping assist and adaptive cruise control as standard equipment. The combination of the two is just enough to provide a useful safety net to protect against inattention or drowsiness on long highway drives while never taking the joy—or the responsibility—of driving away from the driver. Both are welcome when a long day of driving is followed by an hour or two of congested urban freeway to get back home.

If you haven’t sampled any version of the Taycan yet, there’s a whole realm of on-the-road experience to discover that’s not quite the same as in any combustion-powered Porsche, yet at the same time, nearly everything about the actual performance driving experience is wonderfully familiar and exceptionally Porsche. Our time with the Taycan GTS during its launch in the Los Angeles area took us from the Pacific Ocean at Marina del Rey to Angeles Crest Highway and the heights of the Angeles National Forest in Wrightwood, then to a charger in suburban Ontario, followed by a selection of freeways en route back to Marina del Rey.

Right out of the gate, the Taycan GTS’ steering stands out not just among other electric cars, but among cars in general, and especially among cars weighing in the neighborhood of 5,000 lbs. Feelsome, well weighted (not too heavy), and quick to respond, the steering works with the very direct setup of the front axle to deliver near-instantaneous responses to driver inputs. The quick, responsive feel is also due in part to the steering’s variable ratio, which starts at 15.5:1 near center and quickens to 9.3:1 toward full lock. Likewise, rear-steer equipped cars feature similar variable steering ratios starting from 14.2:1 and also ending at 9.3:1. 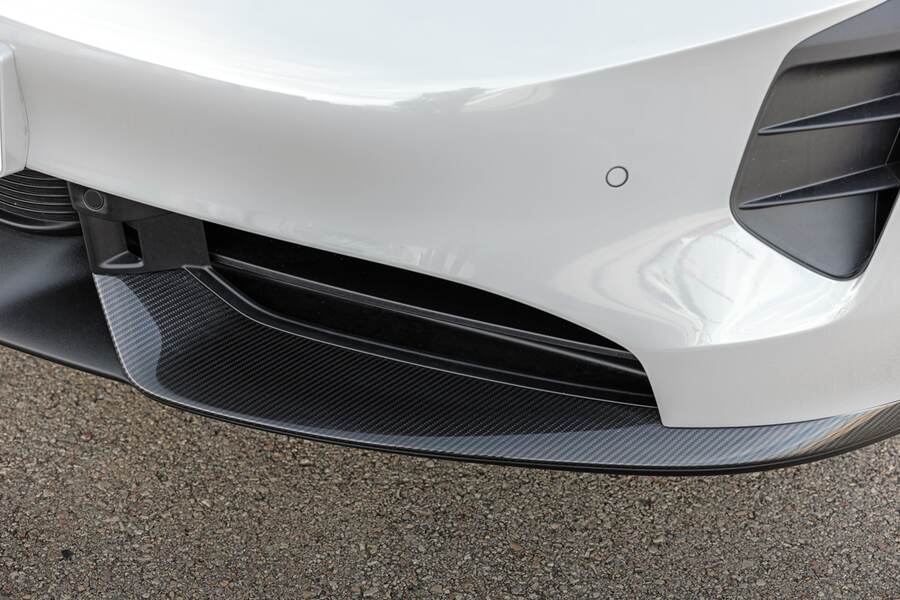 The rear end of the Taycan GTS, on the other hand, is ever-so-slightly slower to respond than the front, requiring just a touch longer to reach its steady-state set in a corner thanks in part to the GTS-specific PASM tune. This trait adds both stability and maneuverability, depending how you use it—unweight the rear as you trailbrake into a corner and the slightly slower roll at the rear makes for a beautifully steady and predictable rotation toward the apex. Then feed in the throttle as you unwind the wheel to put down tremendous power while remaining beautifully neutral at corner exit, the rear end’s slightly slower roll rate helping the PTM and PTV Plus systems to manage the application of maximum forward motive force.

Being the Taycan GTS, there’s more to the overall driver’s package than raw performance, of course. The GTS—the acronym stands for “Grand Touring Sport” or “Gran Turismo Sport”—is, by definition, intended to be a top-tier continent crosser in terms of comfort and composure as well as outright pace. The PASM tune goes a long way toward establishing the Taycan GTS’ bandwidth of ability, soaking up all but the largest of the craters and crevasses along the 405 Freeway and the more remote parts of Angeles Crest on the way to Wrightwood while in normal and Sport modes, then gladly devouring apexes between hors d’oeuvres of fallen rock, ruts, cracks, and potholes in Sport Plus.

When the curvy, nearly vacant, decidedly picturesque road up to the top of Angeles Crest finally ran out, the Taycan GTS Sport Turismo I was piloting reported just 25 percent of the battery’s charge remaining. On the descent back down the mountain from nearly 8,000 feet elevation to a charger in Ontario, CA (around 1,000 feet elevation), the GTS’ regenerative brake system recaptured enough energy to restore the battery to 31 percent charge. 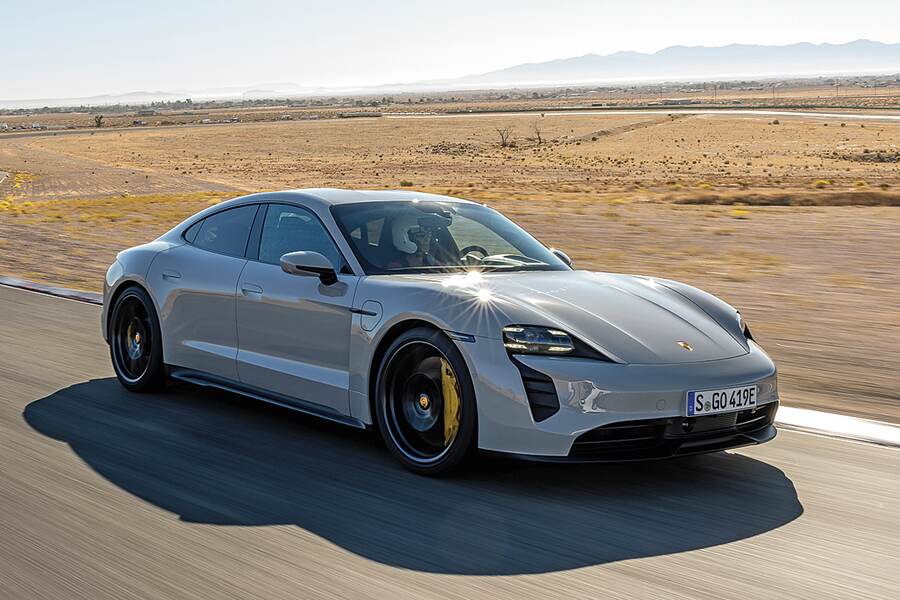 While that would technically have been enough range to drive the remaining 60 miles back to the Ritz-Carlton Marina del Rey, a quick 9-minute, 4-second stop at an Electrify America 270-kW DC fast charger put another 27 kWh of range on the battery, bringing the total back up over 50 percent charge.

The freeway return to the Taycan’s temporary home on the ocean was uneventful, the adaptive cruise control making light work of the ebb and flow of afternoon L.A.-area traffic.

You can, of course, choose your Taycan GTS’ paint color, tweak its details, specify a wide range of cabin materials and finishes, and equip or delete a great deal of equipment—it’s not a true “Omakase” experience in that regard, meant to be consumed as delivered from the chef (or manufacturer, as it were). But at its core, the part of the Taycan GTS that makes it the GTS is the part that Porsche has carefully selected and expertly implemented to be the best all-around version of the Taycan. It’s not meant to be the fastest, or the quickest, or even the best-handling; not your own individual interpretation of how a fast car should feel, but rather Porsche’s own expert determination and evaluation of what you will really enjoy the most in the real world. 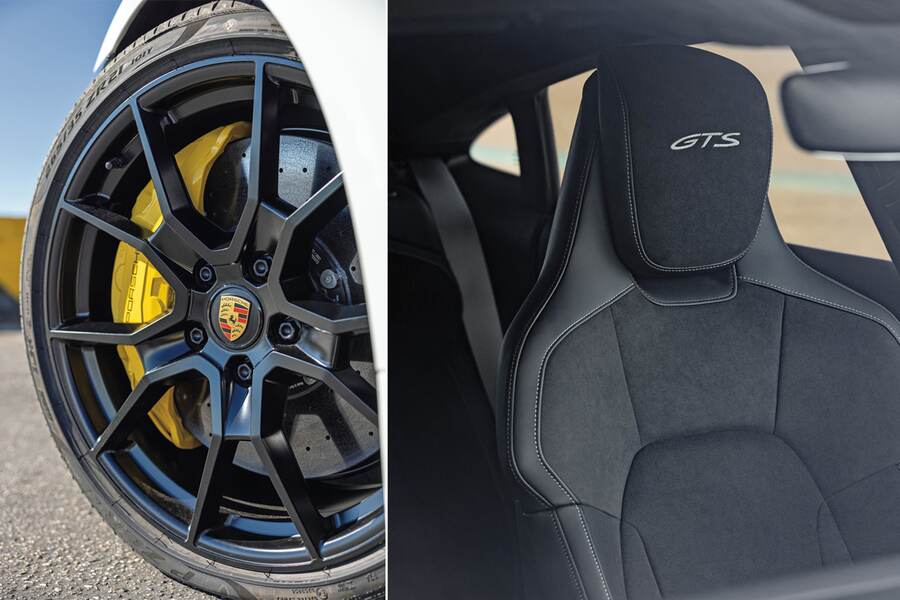 In a world of black and white, where nuance and subtlety are lost in the froth and spittle of absolutism, you might think the GTS would be drowned out by the faster, more expensive Turbo S, or out-done by the off-roadable Taycan Cross Turismo. But for those with a certain palate and set of priorities, the Taycan GTS is the car you wanted but perhaps didn’t know how to order. It’s thankfully simple: Just put yourself in the GTS’ hands and say, “Omakase.” 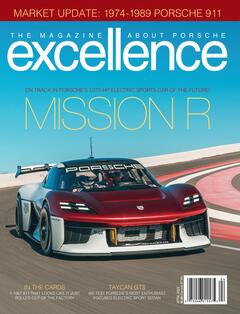