Can the already outstanding 2020 718 Cayman GT4 be made even better? 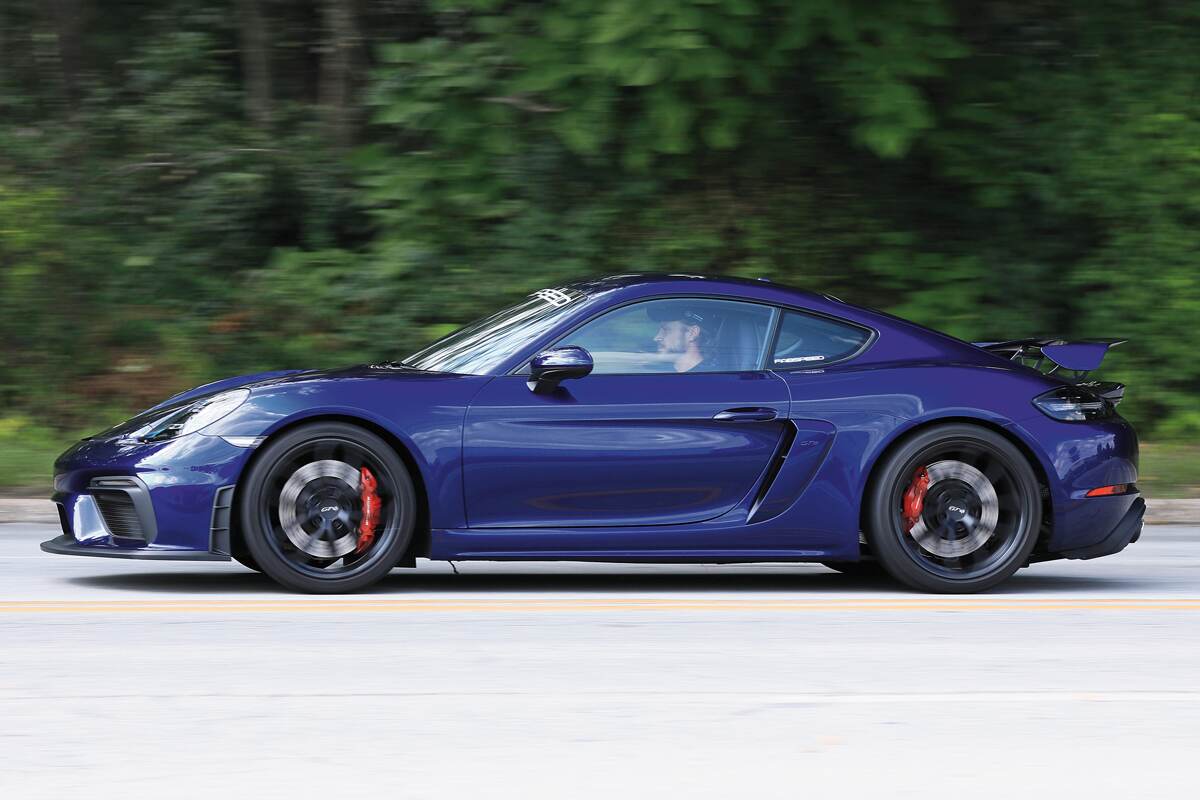 Readers of this magazine know that Porsche hit a home run in 2016 when they took their splendid 981-generation Cayman, gave it a 385-hp 3.8-liter flat-six engine, added some suspension bits from their 911 GT3 parts bins, worked some aerodynamic magic on its body good for 220-265 lbs of downforce, and called it the GT4. For the 982-gen 718 Cayman GT4 in 2020, Porsche upped the ante, giving it a 414-hp six, plenty of GT3 underpinnings, and 50 percent more downforce than the 981 GT4. So, you may ask, what could Joe Fabiani, owner of Fabspeed Motorsport, possibly do to improve the top-of-the-line 2020 718 Cayman?

“My inspiration for any performance car is to enhance the whole driving experience and add sound and power,” says Fabiani. When he brings a new car into the shop to study, his designers and engineers approach the project by looking at the entire vehicle. Their focus is Fabiani’s first principle: find ways to enhance the driving experience. Because sound is a big part of that experience, a lot of attention is given to the exhaust.

“A lot of time when you buy a Porsche,” explains Fabiani, “its exterior might look outrageous, but a lot of time Porsche has scrubbed all the personality out of its exhaust system by defaulting into being really conservative.” He explains that these changes make it quieter and (his words) more of a “grocery getter.” He did acknowledge that things are getting more stringent about exhaust volume due to government regulations, such as the Swiss noise regulations. “OEM manufacturers leave a lot on the table in terms of sports car sound and power that can be enhanced,” he adds. 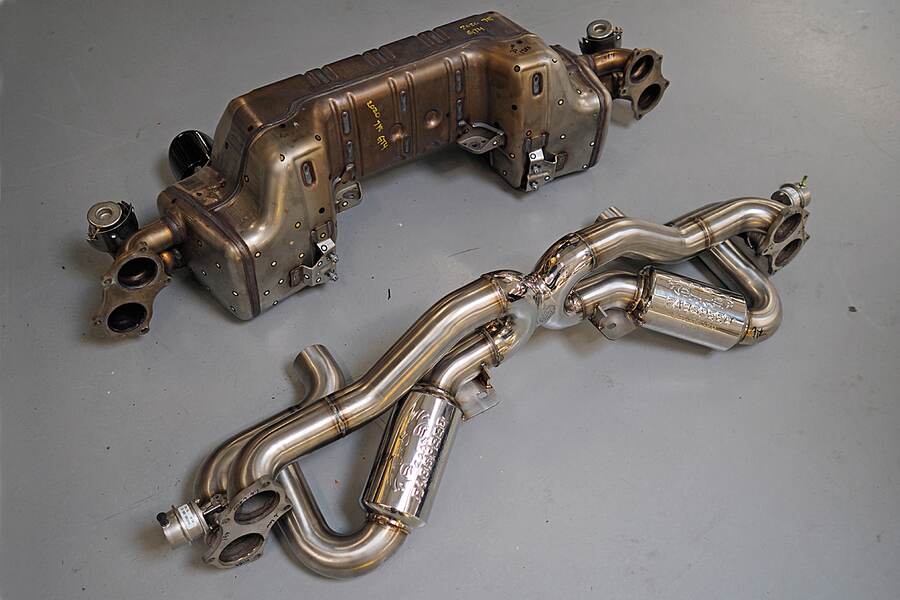 One way to get a performance boost and the first change Fabspeed made to this 718 Cayman GT4 was to replace the stock catalytic converters with something I had not heard of before: sport cats. Fabiani found a German company that makes direct replacements for the OEM catalytic converters. These specialized products meet emission standards while delivering 85-90 percent of a straight pipe’s exhaust flow. These sport cats are from HJS and feature a larger diameter than stock, thereby providing a very desirable higher flow and more power.

Simply put, the HJS cats are functioning, from a pollution control standpoint, like the OEM products. “They perform like straight pipes, there are no check engine light [issues], and you feel safe knowing that you are not a gross polluter,” says Fabiani. For perspective, he has used these HJS cats on catalytic converter-equipped cars manufactured from 1996-on with no issues.

Another simple modification made to this GT4 was removing the gas particulate filters (GPFs) from the exhaust stream. GPFs were designed originally for diesel engines, because their exhausts contain higher amounts of particles known as “soot”—a known lung health threat. Some European manufacturers have also started to add them to their gasoline-fueled cars—Porsche among them. Fabiani said removing these from the system improves the sound and results in a small horsepower gain without triggering the check engine light. 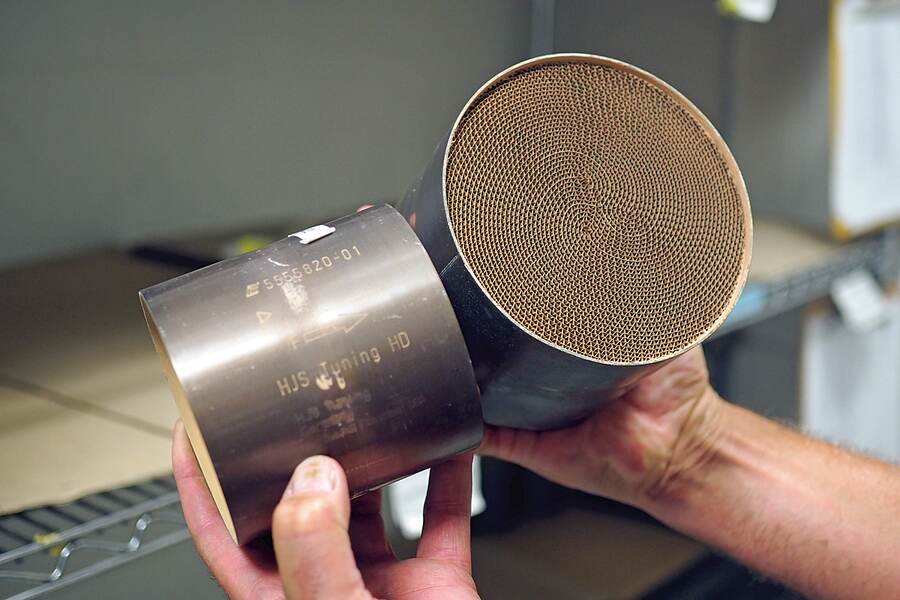 Another more substantial change they made on the Cayman GT4 resulted in real-world performance gains. They installed their sport muffler, or “back box,” which weighs 20 pounds less than the factory muffler. More important, their muffler is a lower restriction component that improves the engine’s breathing and, at the same time, gives this GT4 a better sports car sound. Since my home track, Lime Rock Park, has strict sound rules, I asked if this change would pass their rigorous sound checks. Fabiani assured me that his testing said it would.

These two changes alone would net the 718 Cayman GT4 owner a gain of over 20 hp and improve the sound without making the car too loud—inside and, equally important, out. Fabiani said that some other sport mufflers he has tested drone loudly when you are on the highway and can be very annoying—not so, he claims, with his back box.

If the owner wants to really wring everything he or she can from the 4.0-liter Cayman GT4, there are a few more changes Fabspeed has designed that can do just that. Fabiani admits these are for pure Driver’s Education (DE) or Club Race cars since they are seriously loud—laughing, he says, “Loud as all get out.” 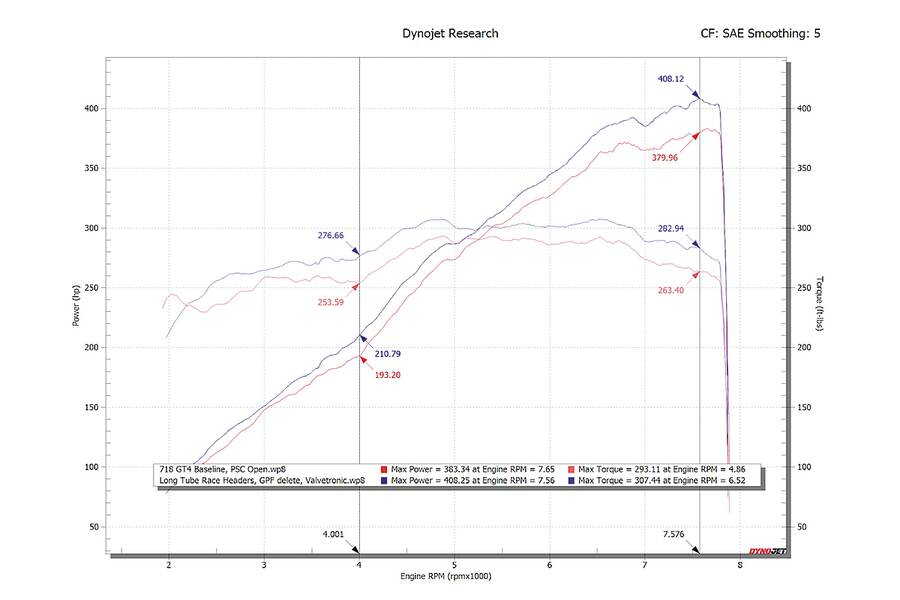 The recipe is: install headers and remove the particle filters and catalytic converters. Then, install in-house designed over-axle pipes and a pair of sport mufflers. But what if the owner wanted to quiet things down on a DE car? In that case, they could keep the Porsche Switchable Exhaust (PSE) technology by using superior valves from Valvetronic Designs. For pure track use, no exhaust valves are used. While we talked about valves, Fabiani reached into the parts bin and showed me a Valvetronic Designs unit and compared it to a knock off one made in the Far East. The difference in quality is easy to see.

Fabiani has owned more than 20 Porsches over the last 30-plus years. He has always used his own cars as testbeds for performance and sound improvements. It would be asking a lot of an owner to lend the company a car for a few weeks to analyze and evaluate potential performance mods. Plus, having a car in the shop that has benefited from their work allows them to do some compelling first-hand marketing.

If a potential customer comes to the shop to inquire about possible power or exhaust changes, Fabiani can toss that person the keys to a car with some or all of the modifications. That gives the buyer real-world experience on how well the alterations deliver on advertised improvements. And that’s what fetched me to his shop since his Cayman GT4 has performance improvements his team is proud to offer to clients. Today, we’ve been tossed the key to the GT4 you see here. 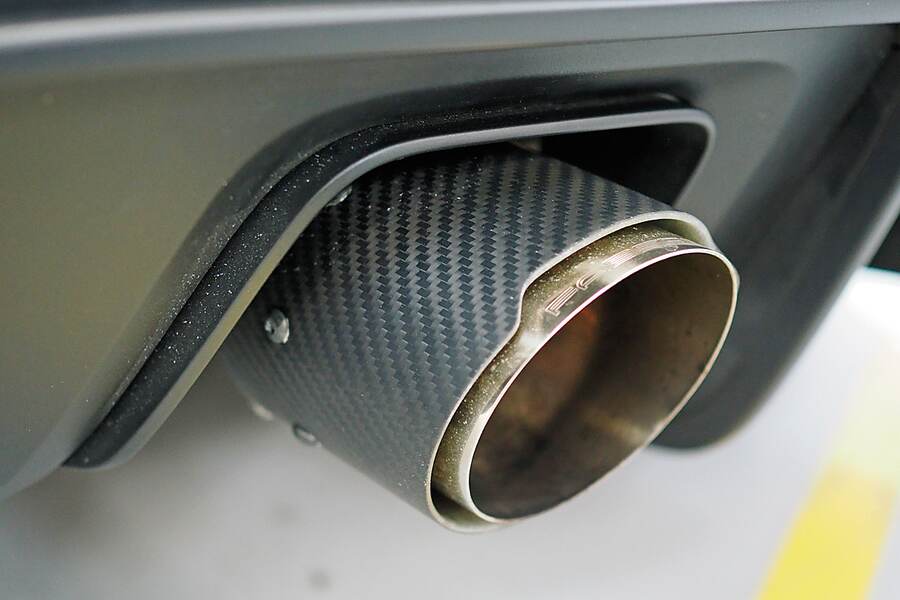 The Proof is in he Pudding

I have been a fan of the Cayman platform ever since the original 987.1 model debuted in late 2005. It made the remarkable Boxster—a delightful, fun-to-drive roadster—a viable track-day car since many road courses frown on driving ragtops at their facilities. In fact, the 987.2-gen Cayman R ranks as one of the best cars I have ever driven on a race track (with champion David Donohue as my co-pilot), so you know I was pumped to get behind the wheel of Fabspeed’s warmed-up Porsche coupe.

Immediately, the throaty exhaust note brings a smile to my face. Inside the car, though, even at highway speeds, the sound never becomes bothersome. My passenger and I speak at normal conversational volume levels. Around town, I can feel the extra oomph as we pull away from a stoplight. But, not wanting to draw attention from locals or the constabulary, I motor away discretely. That all changes when we pull onto the highway.

Merging out into traffic, shifting at the 8,000-rpm redline, and reveling in the roar, we reach the speed limit rather quickly. This car feels great and somehow sounds even better. Without instrumentation, there is no verifiable way to communicate the performance improvements, but the Fabspeed 718 Cayman GT4 easily makes it onto my top five best driving cars list of all time. 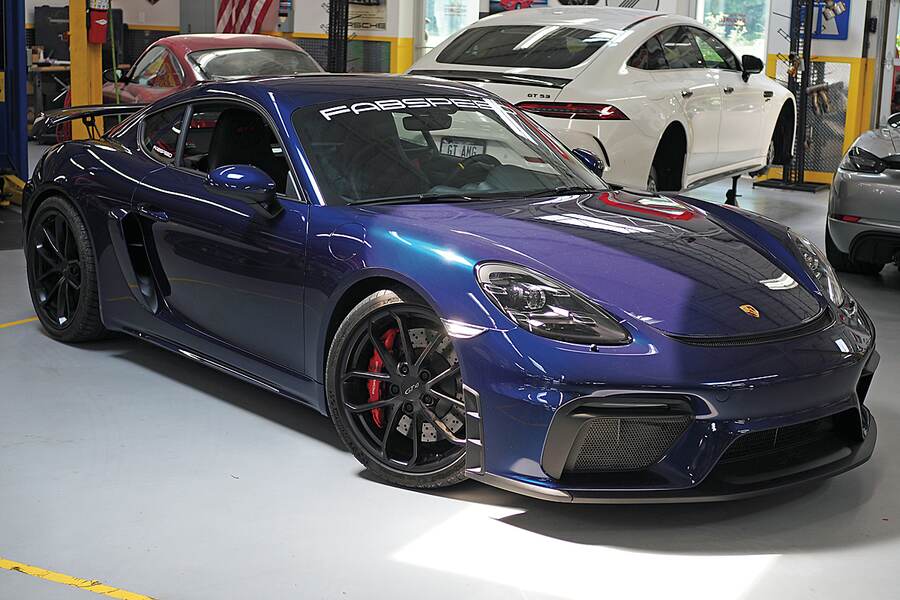 I got my license during the Johnson administration (LBJ, not Andrew), and back then, since my family did not own a car, I bummed rides when I only had a permit to get “seat time” so I could pass my license test. Like a bird watcher, I would write down the make, model, and year of every car in the last pages of my high school Chemistry notebook. It was a very full list since I was a pesty ride mooch!

Since I have been writing for car magazines, I have been blessed with the ability to drive practically every modern car made. My list these days is in my head, and a few cars stand out in bold letters. The 2020 GT4 elbowed its way into my top five because of its nearly perfect combination of power, styling, comfort, and stunning handling.

The other ones are (in no particular order): the 987.2 Cayman R mentioned above—driven for the first time with David Donohue at Monticello Motor Club. It was amazing, but even more so when Donohue was at the wheel. Another is the rare (and now collectible) BMW 1-Series M. It has no bad habits and a useable back seat!

While doing a story on the Ferrari 288 GTO for Excellence’s sister publication, Forza, I had the chance to drive a 959 back to back with the Ferrari. If I won a major lottery, my garage would have a Group B corner: a 959 and a 288 GTO.

Since my last name ends in a vowel, I’ll cheat and add one more Italian car to my top five (or is that now top six). On assignment in Maranello, I was handed the keys to a Ferrari 550 Maranello at the iconic gates of the Ferrari factory and turned loose on the hills and highways of Emelia Romagna. The car was the epitome of Grand Touring, plus it would cruise at “welcome to the Italian prison system” speeds all day.

So, as you can imagine, if the new Cayman GT4 is good enough to crack the best I have driven list, it must be one heck of a car—and so it is! And with more power and sound, it is that much better. 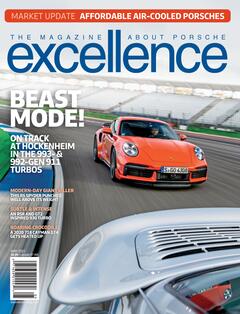