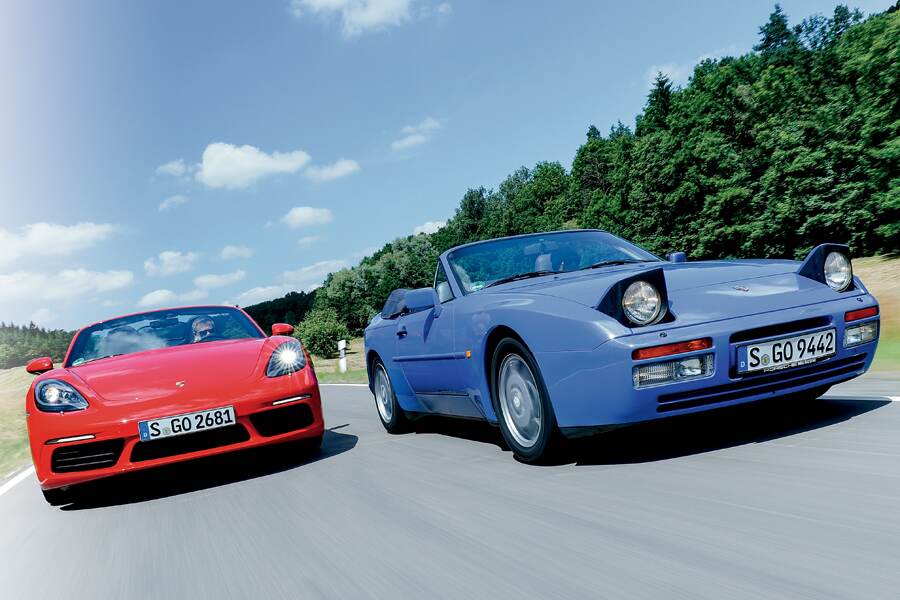 In the course of renaming the Boxster and Cayman by adding the 718 designation, Porsche has reduced the number of cylinders in its mid-engine sports cars from six to four. Downsizing is the motto of the hour, reducing fuel consumption and emissions being the driving force behind it. However, four-cylinder engines in Porsches are nothing new.

The Porsche Museum looked for and sourced a particularly rare version of the 944 a few years ago: The 944 Turbo Cabriolet was only built for about a year, from the fall of 1990 to the summer of 1991. Only 528 units left the factory, making it a desirable collector’s car. 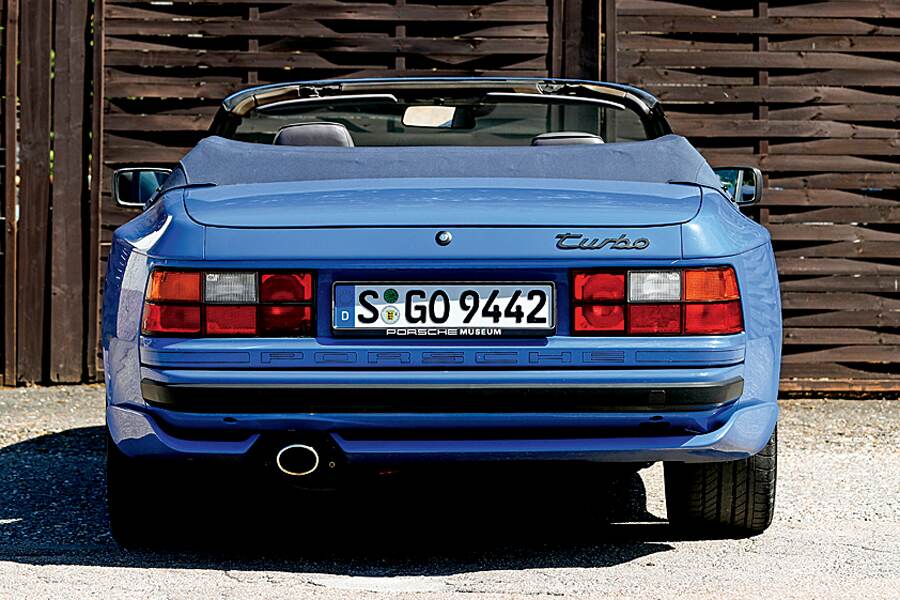 Showing 130,887 kilometers (81,329 miles) on the odometer and a charming patina, the 944 looks somewhat dainty next to the new 718 Boxster, which can be deemed as the successor in spirit, in spite of the fact that the new 718 sports a boxer or flat-four cylinder engine in its middle, while the 944 relied on an in-line four and transaxle layout. The 944’s pop-up headlights seem almost cartoonish these days. Twenty-five years ago, they were used to house powerful headlights in a space-saving way. Today, pedestrian safety needs to be considered, and headlights have evolved into a much more compact design.

A Quick Look Back

In the 1970s, Volkswagen tasked Porsche with constructing a successor to the 914. Porsche eventually assumed full responsibility of the project, and the 924 was born, breaking with mid-engine tradition. The transaxle layout and the in-line four-cylinder engine were a revolution for Porsche and created an opportunity to promote growth in the company in addition to the 911, which the V8-powered 928 also did later on. The practical, quick, efficient, agile and comparatively inexpensive 924 sold well. 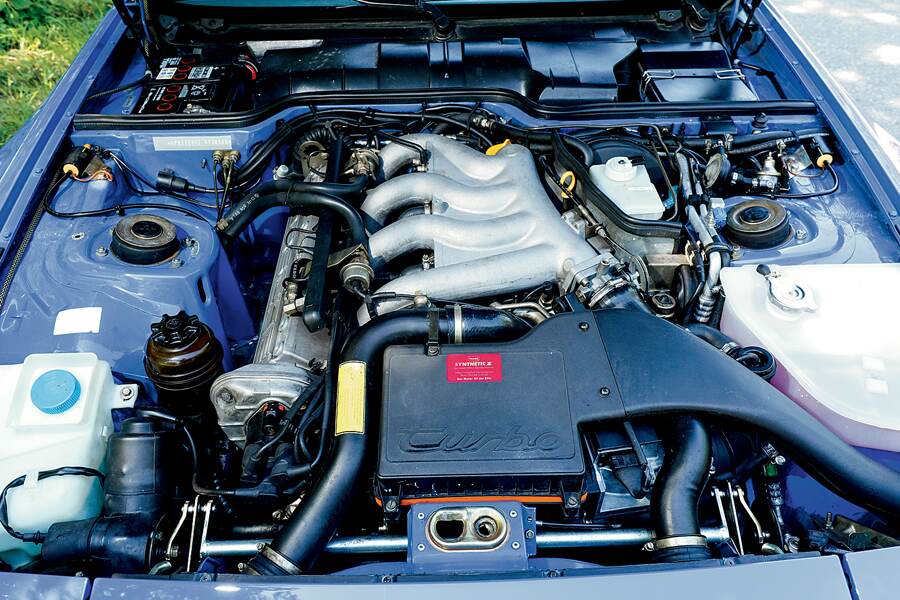 In 1981, the 944 was introduced. It was positioned above the 924 and below the luxurious 928 grand tourer. While the powertrains for the 924 were sourced from Audi, Porsche eliminated this blemish by cutting the 928’s V8 in half. The resulting in-line four ran very smoothly thanks to the inclusion of balance shafts.

The 924 and 944 proved to be very profitable for Porsche, but also had to endure some criticism and ridicule. Positioned beneath the 911, they were regarded by many as “cheap Porsches” for those who could not afford the iconic 911. However, the 944 Turbo Cabriolet was the first Porsche with a four-cylinder engine to surpass the 100,000 Deutschmark threshold: its price at the time was 103,725 DM (equivalent to $50,269 in 1991 or $88,583 in current U.S. dollars).

The customer received a lot in return: a vehicle with no kinks for one, as 1991 was the last year of production for the 944, which was replaced with the 968. Furthermore, the 944 had established itself as a comfortable, less compromised alternative to the 911, also due to its more forgiving handling. With 250 hp and an electrically secured but manually operated top, the front-engined Porsche was capable of 160 mph, which not many convertibles could claim in the early ’90s. 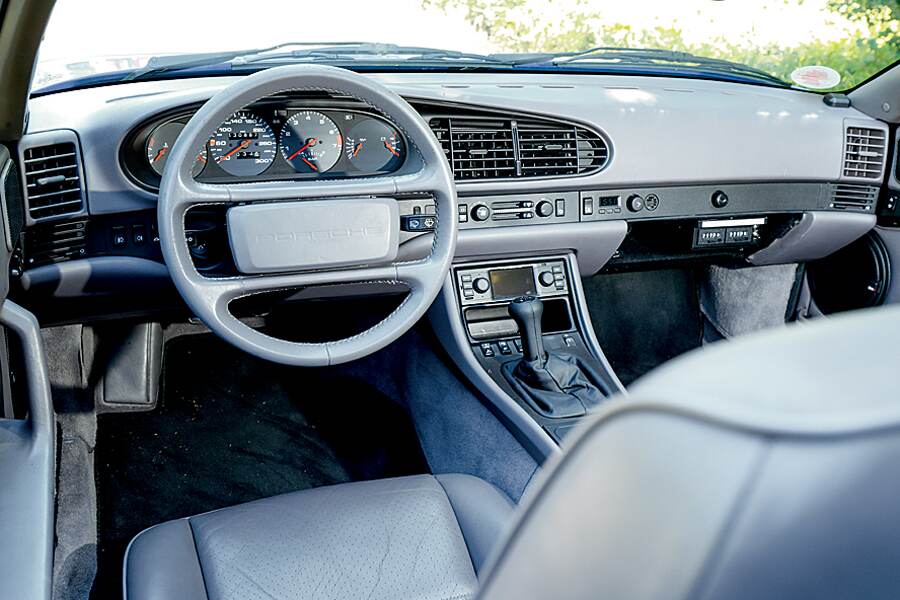 What does a 25-year-old 944 feel like today? In one word: fantastic! The leather seats offer a lot of support and provide as little reason for criticism as the seat position itself, which is sporty and low. Like in the 924 and the 928, the ignition is located on the right. A tripmaster timer mounted near the glove compartment shows that this 944 is used for classic car rallies from time to time and isn’t just gathering dust in the Porsche Museum. Upon startup, the engine note reveals its healthy 2.5-liters of displacement, while the exhaust system, which ends in a single tailpipe, seems somewhat undersized by today’s standards.

Thanks to the dual tailpipes of its optional Sport exhaust, the 718 Boxster tickles the aural senses more, emitting a tune reminiscent of the early four-cylinders in the 356. The seat can be adjusted to fit practically any size driver, the ignition is mounted on the left like in most classic Porsches, and a number of buttons provide adjustability for throttle response, exhaust flaps and damper setup—things that 944 drivers could only dream of! 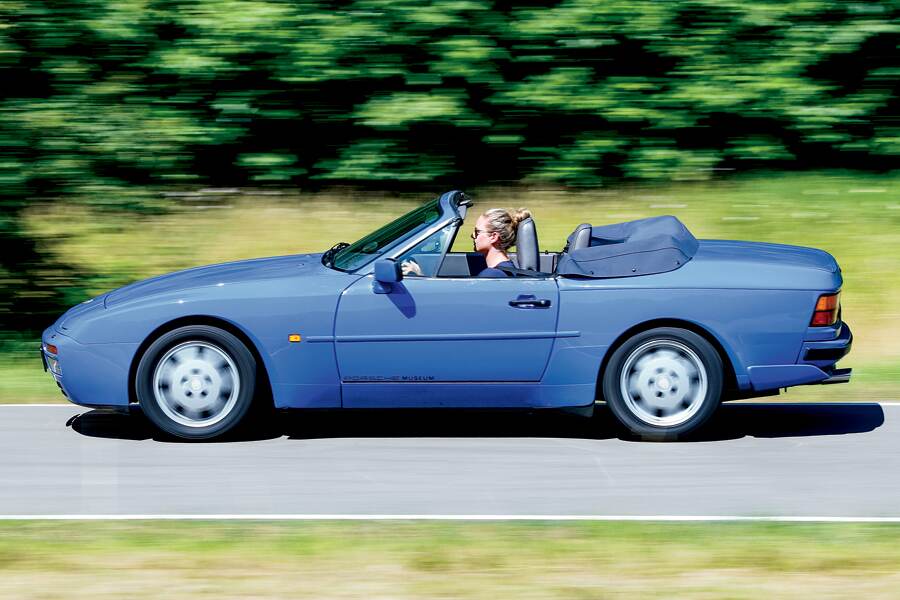 Nevertheless, the 944 drives remarkably well, even by today’s standards. Its turbocharged engine, based on the right cylinder bank of the 928, originates from motorsport (924 GTP) and is a powerful, smooth and comparatively efficient powertrain. It develops a healthy 258 lb-ft at 4,000 rpm, which gives the 944 Turbo a very sovereign character. Missing a six-cylinder engine? No. Boxer sound? More so, as it happens to be the characteristic soundtrack for Porsche’s sports cars.

A boost pressure gauge reveals the activity of the 944’s turbocharger, which gets into full stride at about 3,500 rpm. The engine pulls strongly to about 6,000 rpm. It doesn’t offer a kick in the pants like the first 911 Turbo, but it builds revs very consistently once the boost builds up. And 5.9 seconds is all it takes to reach 62 mph. By comparison, a contemporary 911 Carrera 2 (964) coupe was only 0.2 seconds quicker and reached the same 160 mph top speed as the 944 Turbo.

Transitioning to the 718 Boxster, which doesn’t have a turbocharger with variable turbine geometry (VTG) like the 718 S model, it becomes apparent how far turbocharged engines have come since 1991. Boost starts building at about 1,500 rpm, but the transition is much smoother and seems almost like a naturally aspirated engine, feeling much more consistent than in the 944 Turbo. Lag is practically nowhere to be found. 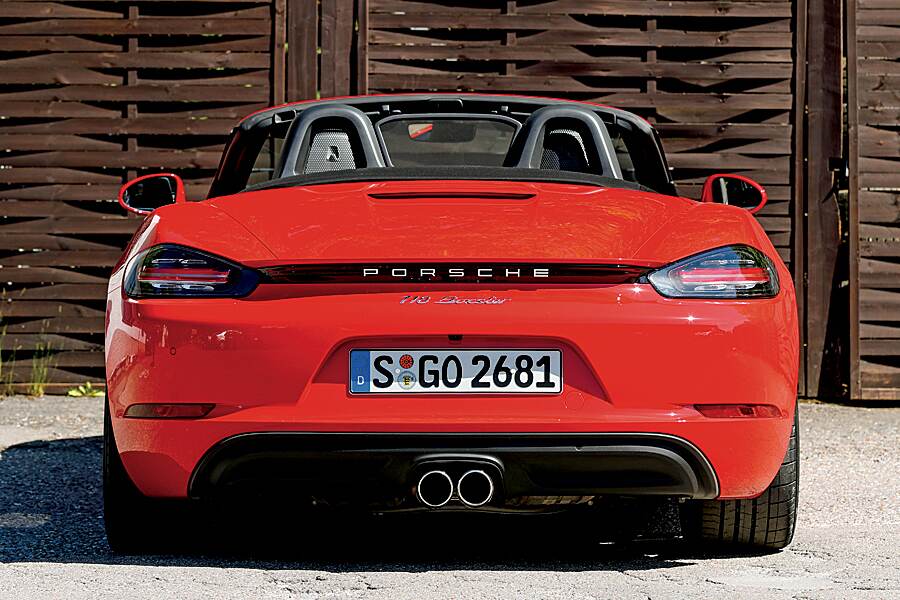 One can argue about the sound, but that is, like always, a matter of taste. It certainly carries more volume than the comparatively small 2.0 liters of displacement would suggest, consisting of a deep bass and a timbre that falls somewhere between VW Beetle and Subaru-Boxer. “Beetle on crack” was one comment we received, which is remarkably accurate, as the 718 sounds wild for sure.

Both cars are fitted with slick shifting manual transmissions. While the 718 crackles and pops on downshifts thanks to auto-rev-match, the 944 offers no extraneously generated sound enhancements, which is charming in its own right. Of course, the six-speed transmission in the 718 is slicker and more precise, but the five-speed gearbox in the 944 is not balky and allows for quick gear changes. Due to the abundance of torque, however, the 944 does not need to be redlined and can be driven sedately without constantly having to shift.

The 944 can also be driven very swiftly thanks to its sporty suspension that still offers enough comfort. In tight corners, there is noticeable body roll, but the suspension smoothes out bumps very effectively. Spirited driving on country backroads reveals no under- or oversteer. Even at higher speeds, the 944 remains stable and gives the driver a high degree of confidence. Thanks to the transaxle layout with a rear-mounted transmission, the 944 also offers good traction. 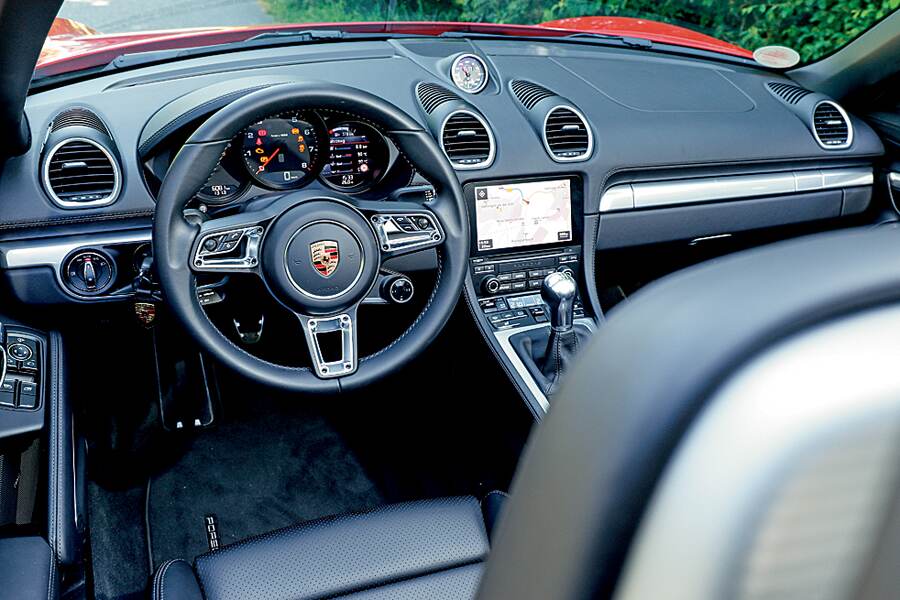 The precise steering offers a good amount of feedback, albeit with heavier effort compared to the 718. The handling prowess of the 944 is almost a bit surprising considering its age. But after a few miles of driving the pop-up-headlight Porsche, there’s a big grin on our face.

Switching to the 718 Boxster immediately reveals that the automotive world has entered a whole new era within the last 25 years. Everything happens much more fluidly and to a higher degree of perfection. The gear shift lever is positioned perfectly, slightly reminiscent of the one in the Carrera GT supercar. The seats offer more lateral support as the 718 tackles curves with aplomb and no noticeable body roll.

Thanks to a very even distribution of weights, the 718 remains neutral during hard cornering. While the 944 suspension seems to communicate to the driver in an analog way, the electronic suspension systems and stability control work effectively and unbeknownst to the driver. It is shocking how much quicker and more stable the 718 charges through corners, how much more engaging it is to drive, and how fast the car is overall. 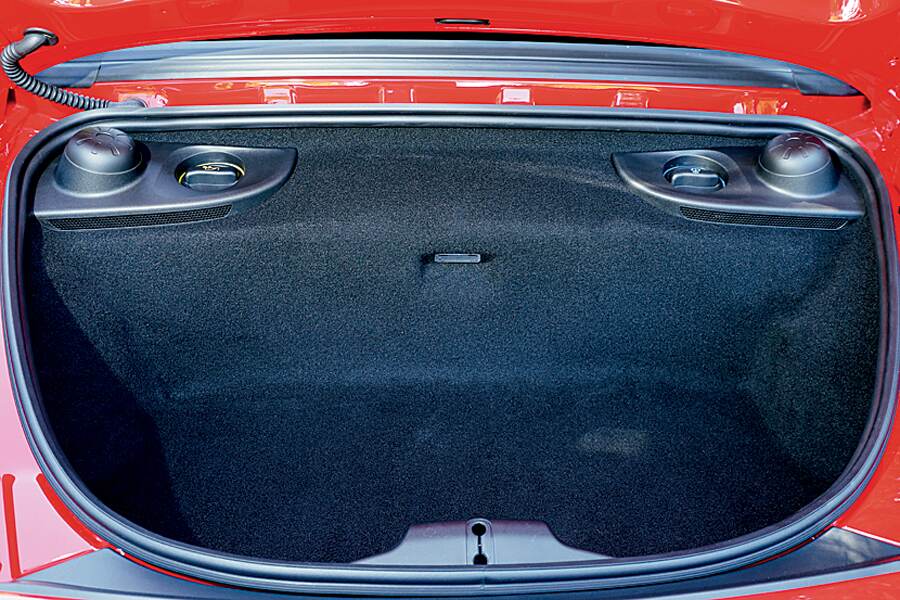 The agility of the 944 was surprising. It serves as early proof that Porsche delivered the goods beyond the iconic 911—and they knew it, as was reflected in its hefty price at the time. The 944 Turbo was as expensive then as the 718 Boxster is today! The Boxster represents the entry into the Porsche world, along with the Cayman. Then and now, four-cylinder engines power these cars, leaving a respectable gap to the brand icon 911.

At the end of the day, we can’t help but wonder: What will the entry-level Porsche feel like 25 years from now? Will it still have a four-cylinder engine? Or a turbocharger? The truth is, only time will tell. But if it’s as big of a leap forward as the 718 is from the 944, we can’t wait to put it through its paces! 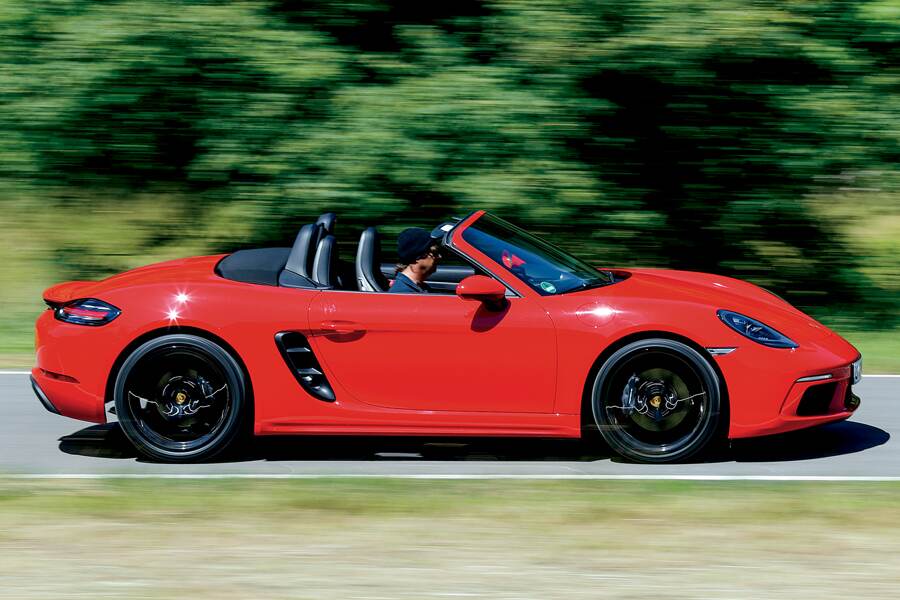 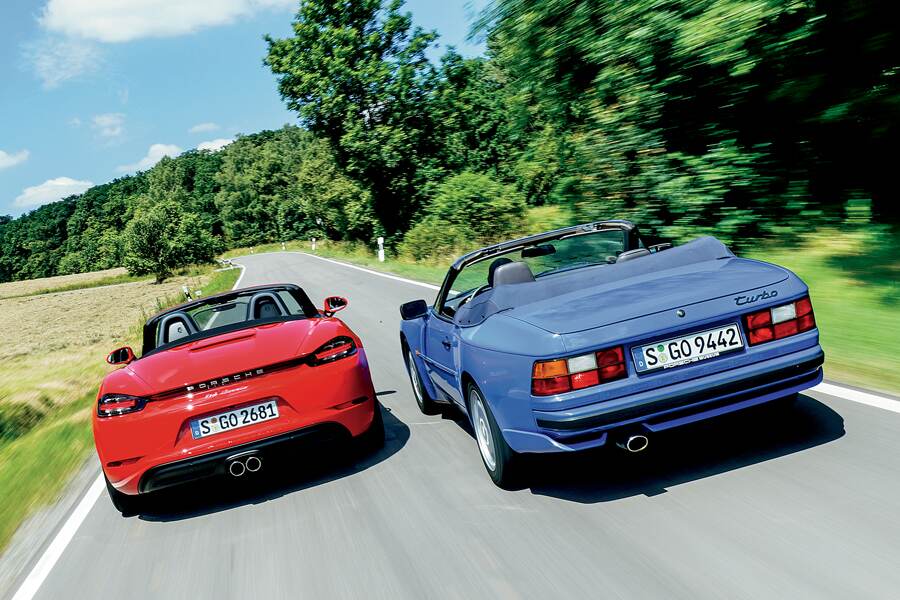 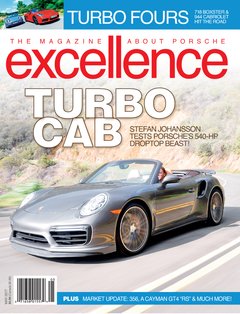