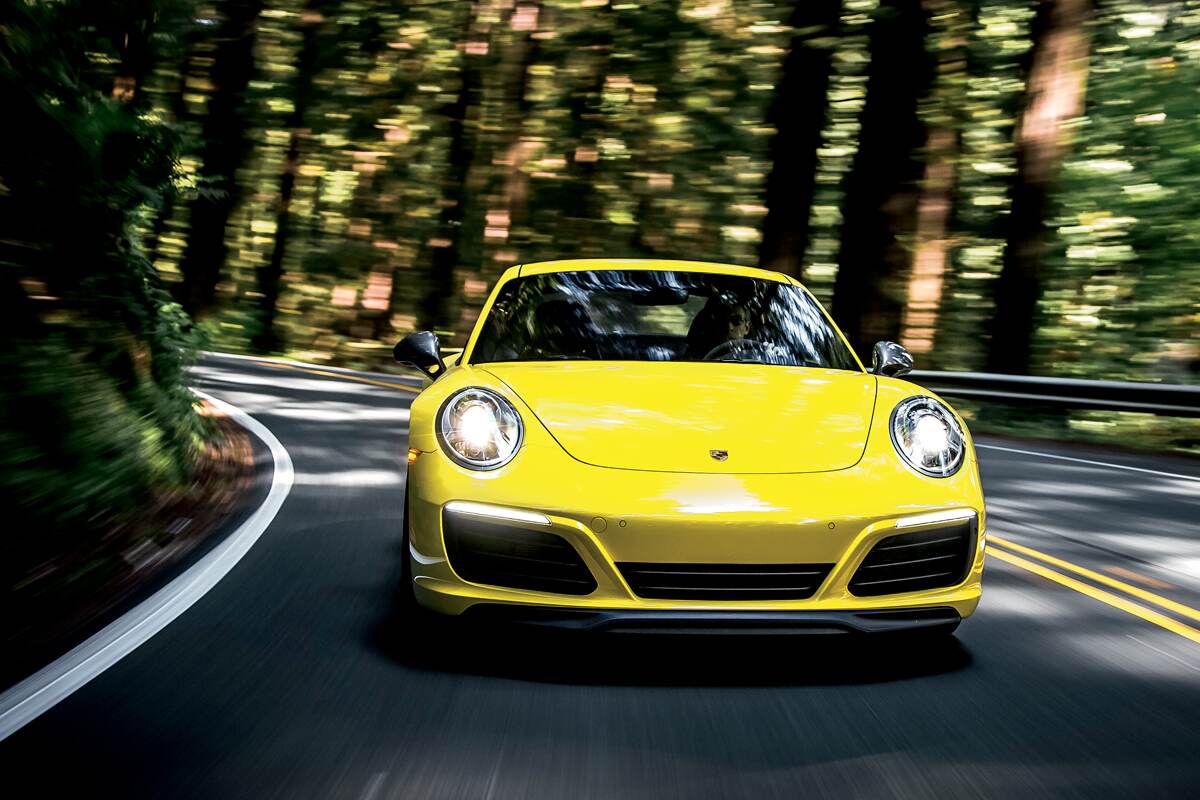 If you’ve ever thought any of the above, you’re not alone. Since the Cayman was launched for the 2006 model year, it’s been compared to its big brother by media outlets to no end. And the takeaways are almost always the same. But if we think these cars are pitted against each other way too often, then why the heck do we have them going head-to-head here?

The answer is because our test Cayman has an important stat in its favor. In boxing, the fighter with the longer reach has an advantage. Here, our six-speed mid-engined machine has a better power-to-weight ratio than its seven-speed-PDK-equipped rear-engined opponent (8.3 vs. 8.6 lbs/hp). So in this case, the 911, rather than the Cayman, could be thought of as the ‘little brother.’ 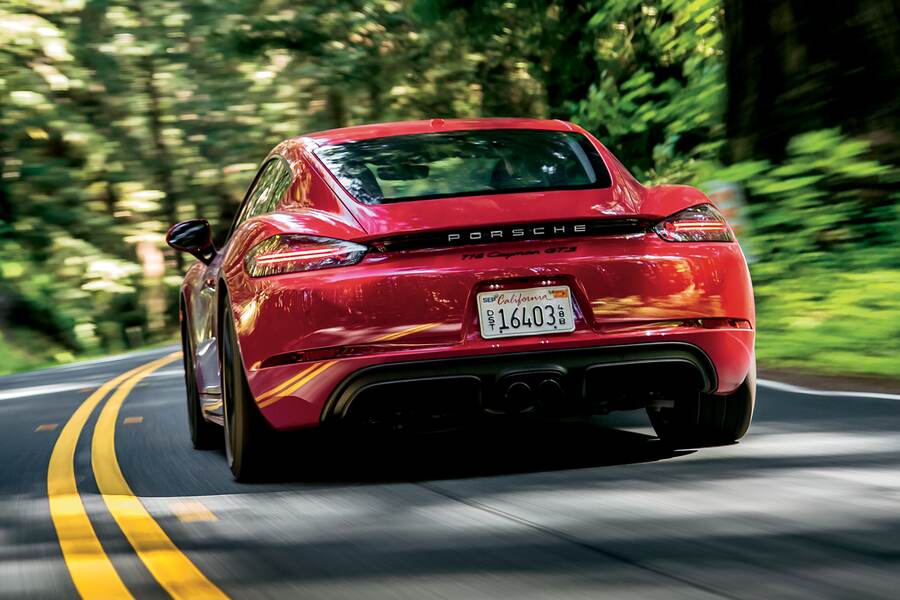 A modern version of the 911T from the late-1960s could easily be labeled as an unnecessary model dreamed up to squeeze the last few sales out of the soon-to-be-replaced 991.2-generation platform. And such cynicism is not unreasonable when you consider this ‘lighter’ sports car (which was introduced by Porsche as “Less is more – the new Porsche 911 Carrera T”) weighs just 11 pounds less than its standard Carrera stablemate. So this is just a base model with $11,000 in extra stickers and arbitrary tweaks then, right? Not quite.

Since the Carrera T uses the regular Carrera as its basis, it gets the same twin-turbo 3.0-liter flat six that makes 370 hp and 331 lb-ft of torque. Unlike the Carrera, though, the T comes standard with 20-inch Carrera S wheels shod with 245/35ZR20 and 305/30ZR20 tires front and rear, a Sport exhaust with blacked-out tips, a limited-slip differential, a unique front spoiler lip, and a 10-mm (0.4-inch) lower Porsche Active Suspension Management (PASM) Sport suspension.

It also gets Porsche Torque Vectoring (PTV), front seat centers made of Sport-Tex fabric, less sound deadening insulation, nylon door pulls, and lightweight glass for the back and rear side windows from the 911 GT models. Manual gearbox versions come with a lower final drive gear ratio and a shorter gear lever. Rear-axle steering and rear-seat delete, which aren’t available on the regular Carrera, are options for the Carrera T. 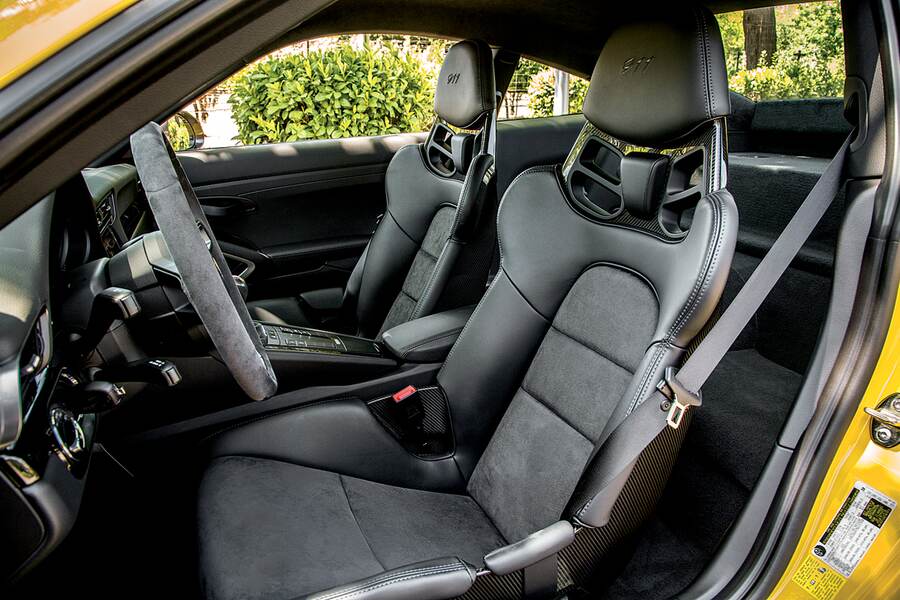 Considering its array of enthusiast-focused features and options, the Carrera T could be thought of as a GTS version of the standard Carrera. (The 911 Carrera GTS is based on the Carrera S.)

If the Carrera T could be viewed as a GTS-spec regular Carrera, then the 718 Cayman GTS could be seen as a Cayman S with a slight bump in power and all the choicest go-faster options fitted as standard. In fact, that’s what Porsche intends with all its contemporary GTS models.

Based on the 718 Cayman S’s 350-hp 2.5-liter turbocharged flat-four engine, the GTS’s 2.5 chucks out 365 hp thanks to a larger composite intake manifold, tuned engine software, and a bigger variable turbine geometry (VTG) turbo that produces a maximum of 18.1 psi of boost (up 1.4 psi over the S’s 16.7 psi). Surprisingly, peak torque in the manual transmission GTS remains the same 309 lb-ft made by the regular 718 Cayman S. PDK transmission versions produce 317 lb-ft thanks to slightly different tuning. 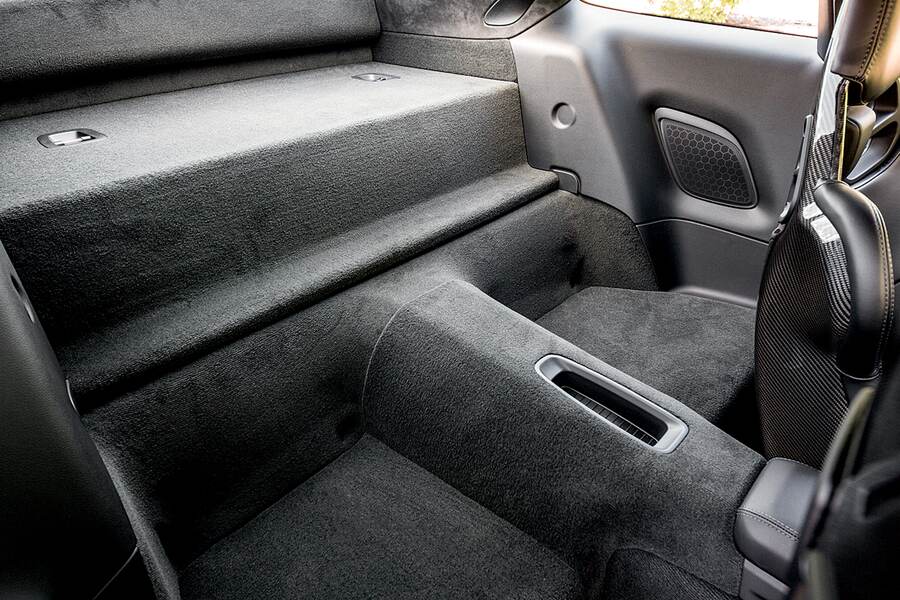 Like the Carrera T, the GTS also gets a 10-mm lower PASM suspension, a Sport exhaust with dark tips, and 20-inch Carrera S alloys (albeit wrapped in 235/35ZR20 front and 265/35ZR20 rear rubber). It also has tinted Bi-Xenon headlights, unique front and rear bumper aprons, the Sport Chrono Package, a GT Sport steering wheel, GTS logos on the headrests, rev counter, doors and door sill plates, an interior swathed in Alcantara, and the same 330 mm (13.0 inch) front and 299 mm (11.8 inch) rear brakes found on the Carrera.

The first thing I notice after sliding into one of the 911 Carrera T’s optional and very supportive Full Bucket seats is the crystal-clear view out the back of the car. Thanks to the lightweight-spec glass, the rear window isn’t heated and therefore doesn’t have the thin black heating element lines found in most new vehicles for the last three or more decades.

Firing up the twin-turbocharged engine produces a roar then a growl. Like the 991.2-gen Carreras we’ve tested in the past, it doesn’t sound quite as vibrant as a naturally aspirated modern 911. Even so, the exhaust note is still pleasing to the ear. Shifting the PDK gearbox into Drive, I roll onto a state highway in the California wine country city of St. Helena. 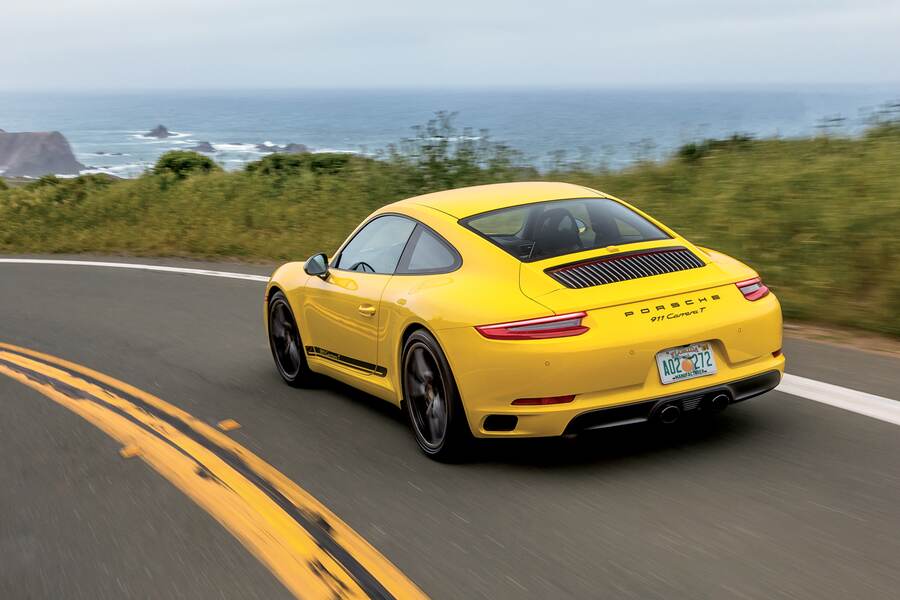 Driving along normally produces the same smooth, relaxed ride that has become a trademark of contemporary 911s. As I find out, it’s comfortable enough to drive on longer journies without the worry of a sore back from a hard suspension or a headache from unpleasant noises. Reaching a tighter section of backroads northwest of the vineyards and changing driving modes from Normal to Sport is all it takes to turn this mild-mannered cruiser into a much more enthusiastic sports car.

The engine mapping changes in Sport mode and the sound from the higher engine revs only serve to encourage sportier driving. Not only is this Carrera T just as balanced and composed as its regular Carrera sibling, but since it’s equipped with optional Rear-Axle Steering (RAS), it has an even greater ability to grip the road when pushed harder through tighter corners and around longer sweeping bends. Standard PTV only serves to bolster this sports car’s confidence-inspiring level of agility.

Interior noise is slightly elevated due to the lesser amount of sound deadening materials, but the engine and road sound that comes through isn’t unpleasant. Instead, it is reminiscent of older 911s that were built before the days of Noise, Vibration, and Harshness engineering. Most modern premium car buyers expect an interior decibel level of a certain standard. The sound inside the Carrera T isn’t likely to offend anyone, but it also makes sense why less enthusiast-focused variants are most soundproofed. 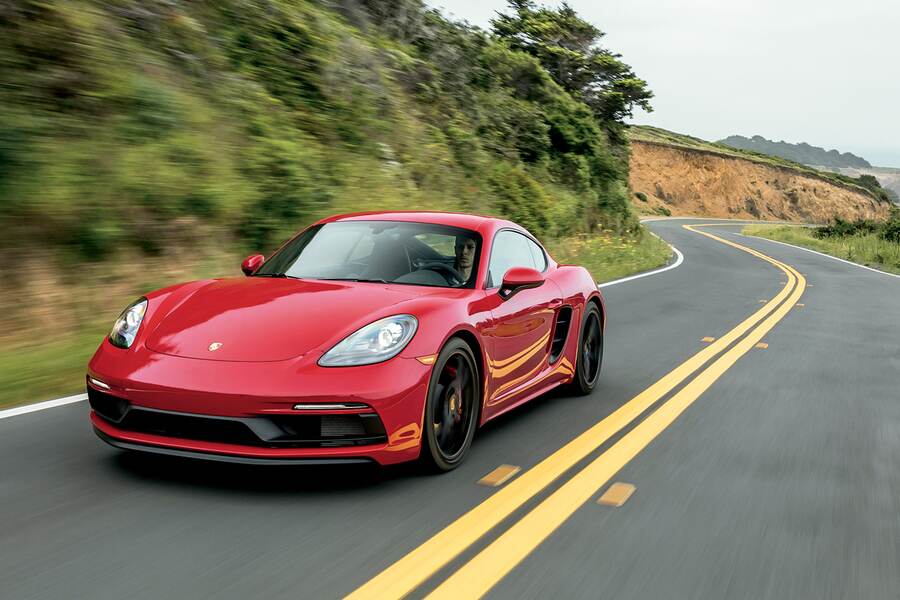 Regarding power, the Carrera T ‘only’ has 370 horses. The Carrera S’s 420 hp is thrilling, but I do not feel wanting for power on this drive. If I were at a track day and got passed by Carrera Ss, GT3s, and the like, I’d probably change that opinion. But then again, the Carrera T is more of a backroad and autocross machine than it is a full-on street-legal race car. And as has been the case since it was introduced for 2009, the PDK transmission is virtually always in the correct gear whether you’re in traffic or accelerating hard out of a hairpin corner.

The steel brakes scrub off speed rapidly. Even so, I’d be more inclined to choose the optional Porsche Ceramic Composite Brakes (PCCBs) if I were going to push this car—on either backroads or a closed circuit—on a regular basis. While their $8,520 price tag isn’t small, the ceramics are good enough that they are missed on a car that already has an excellent standard braking package.

Arriving in the oceanside town of Albion, I get into the 718 Cayman GTS, shift its six-speed gear lever into first and set off for a mix of state highway, backroad, and freeway driving. While its Alcantara interior and overall ride quality are of excellent quality, the Cayman GTS has a certain boominess from its engine at low revs that resonate in the area behind my head at times. The exhaust note is also unremarkable at lower rpm. 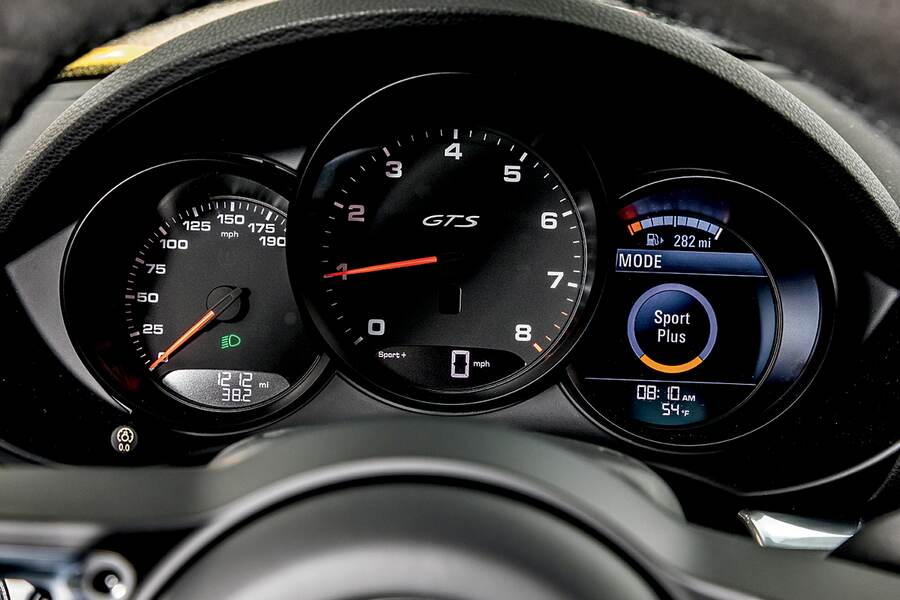 Making my way along some busier state roads en route to more isolated backroads, I find the GTS to feel comfortable but unexciting at lower speeds. Sure, most cars are unremarkable to drive while puttering around in traffic. But the Carrera T was fun to drive along at both slower and brisk speeds. Here, in a line of traffic, the GTS feels like a racehorse impatiently trotting behind a line of ponies. Blame it on this car’s need to be pushed to deliver excitement or its relative lack of truly inspiring engine sounds at lower rpm.

Finally reaching my turn, I downshift a few gears, put the pedal to the floor, and then upshift to third after reaching the 7,500-rpm redline. Wow, this thing is pretty fast! After a long deserted straightaway, I enter a series of gentler curves and then some corners that require harder braking. Accelerating hard from tight first and second gear corners produces a symphony of glorious Porsche flat-four engine sounds. Where this 2.5 sounded uninspired before, it sounds fantastic when winding it out through the gears on this isolated two-lane.

The 365 ponies feel most apparent higher in the rev range. Although the GTS’s 309 lb-ft of torque begins at just under 2,000 rpm, it feels like the torque band starts higher up when you are sitting in the driver’s seat. The level of torque made while puttering around is sufficient, but it also doesn’t feel as substantial at lower revs as the numbers would lead you to believe. As such, to be satisfied with the level of power being made by the flat four, you have to shift at higher rpm. 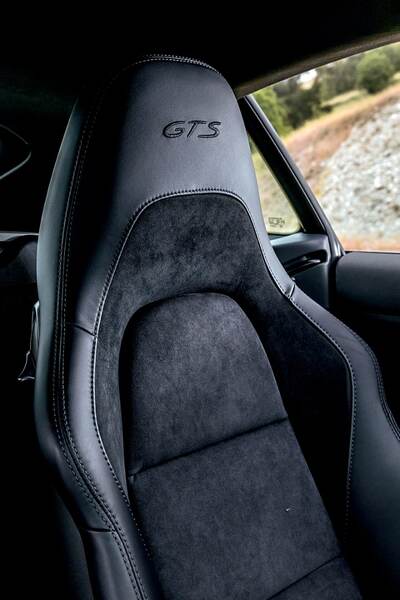 This GTS is fitted with PCCB brakes, so its stopping power is exceptional and allows me to explore deeper and deeper braking points into corners. Regarding chassis and suspension, the Cayman feels both more playful and forgiving when pushed hard, relative to the Carrera T.

Making my way back to St. Helena from the jaunt up north, I find the Cayman to be less comfortable than the Carrera T. Even so, my senses are more stimulated by the GTS. It may not be as pleasant as the 911, but the Cayman’s relatively higher level of rawness also appeals to the side of me that prefers old-school sports cars that were made in the days when unfiltered driving experiences were the standard.

So, which is the better Porsche? The answer depends on the type of sports car you prefer. 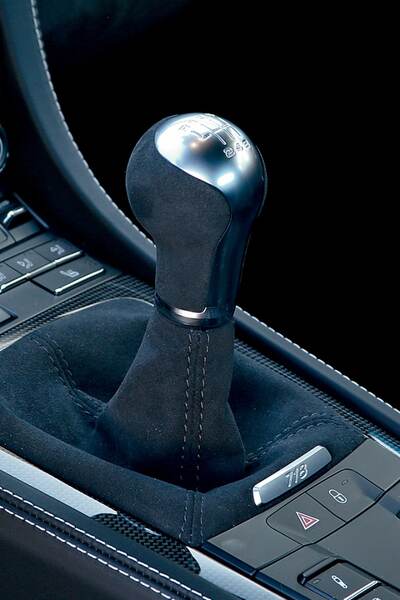 The Carrera T is both a blast to drive and comfy enough to operate on a regular basis without much, if any, fuss. If you don’t need a lot of space for more than an extra passenger or cargo more substantial than a few pieces of small luggage, then this is a car that could replace more practical sporty German machines like a BMW 3-Series or Mercedes C-Class—which are albeit much less expensive than the 911—for daily driving. The T is ultimately both a relaxed road-going GT and an engaging driver-centric sports car melded together in one package.

The 718 Cayman GTS was not as comfortable, didn’t sound as sweet, and did not strike me as a car I’d like to drive on a daily basis compared to the Carrera T, and that’s what gives it an edge over the 911. Wait, if the 911 is better than the Cayman in those ways, then why would I say that? Simple. The Cayman GTS has to be pushed to reach its real potential. It’s the kind of machine you daydream about all week and then blissfully run to redline in every gear all weekend long. You’re enjoying it most when you’re really hustling. The Carrera T is fun at all speeds, but it’s also sometimes less thrilling in comparison when it really counts. 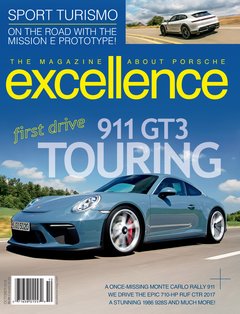