We get behind the wheel of the 453-hp Panamera Sport Turismo GTS. 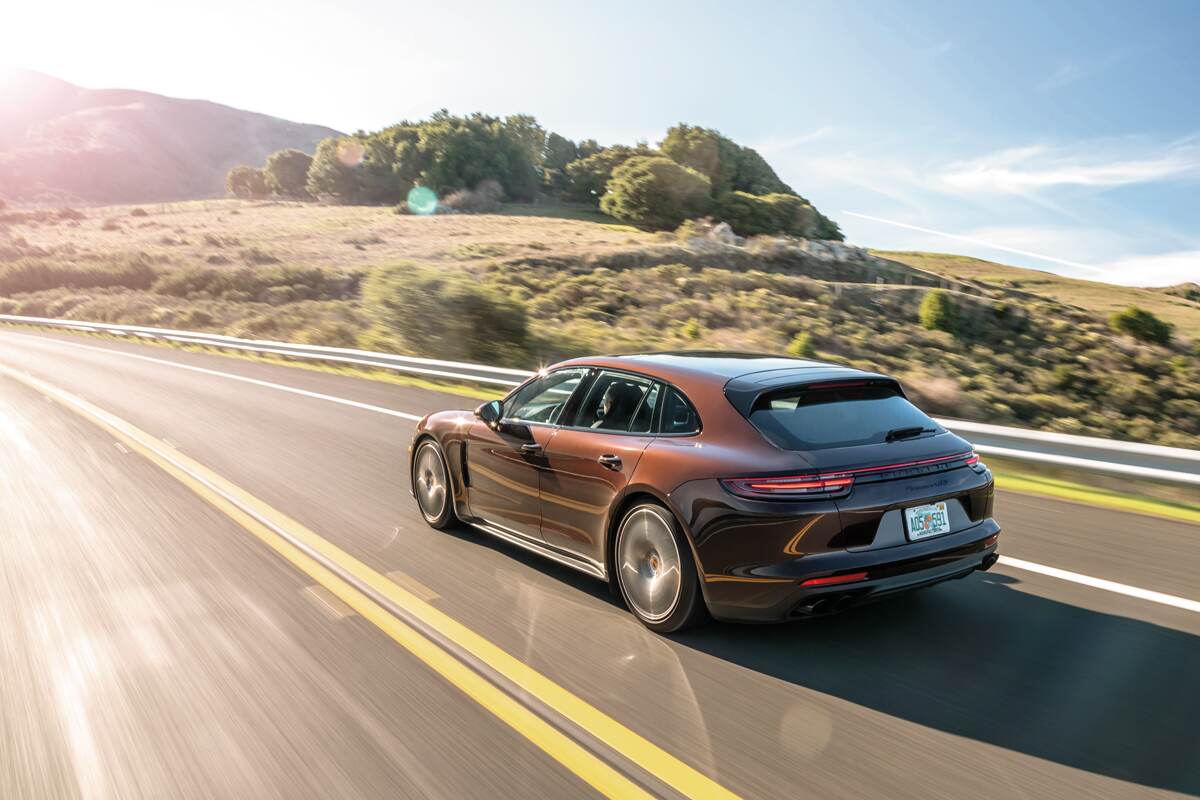 The first-generation Panamera was unveiled in 2009 as Porsche’s entry in the large luxury sedan market. Aimed at taking the fight to mid- and full-size four-doors made by Mercedes-Benz, BMW, and Audi, the Panamera proved to be the sportiest of the bunch. But while the Porsche sedan’s big rear hatch and ample trunk space made loading large roller bags and packages a virtual breeze, it lacked cargo volume relative to station wagon (a.k.a. estate car) variants offered by some competitors. Porsche aimed to address this with a wagon version of the second-gen Panamera. Enter the Sport Turismo, which debuted in 2017, Porsche’s answer to cars like Mercedes’ AMG E 63 S Wagon.

Today, we’ve got a GTS version of the Sport Turismo, which is the most enthusiast-focused trim in the Porsche lineup. By that, we mean it has a long list of sporty options that come standard. It’s a machine that can have practically as much hauling ability as a Macan but with a lower center of gravity and a more traditional sports-car seating position. And we do mean Macan-like storage space, as the Sport Turismo bests the Macan in trunk storage with the back seats up (18.3 vs. 17.7 cu-ft) and is just short of the Macan’s cargo volume with the rear seats folded down (49.0 vs. 53.0 cu-ft). While that’s all well and good, what counts to us is what this car is like under the bodywork and from behind the wheel.

At the heart of the Panamera GTS is an aluminum 4.0-liter twin-turbo V8 engine chucking out 453 horsepower and 457 lb-ft of torque. That’s 13 hp and 52 lb-ft more than the 2020 Panamera 4S’s 2.9-liter twin-turbo V6, and 97 hp and 110 lb-ft less than the current Panamera Turbo, which uses the same 4.0 engine with different tuning. This V8 design, internally known as the VW EA825, was developed by Porsche and is also used (albeit in different tune) in the current Cayenne Turbo and Turbo S E-Hybrids. It can also be found with tweaks in other Volkswagen Group products, like Audi’s RS6, RS7, and RSQ8, and Lamborghini’s Urus. 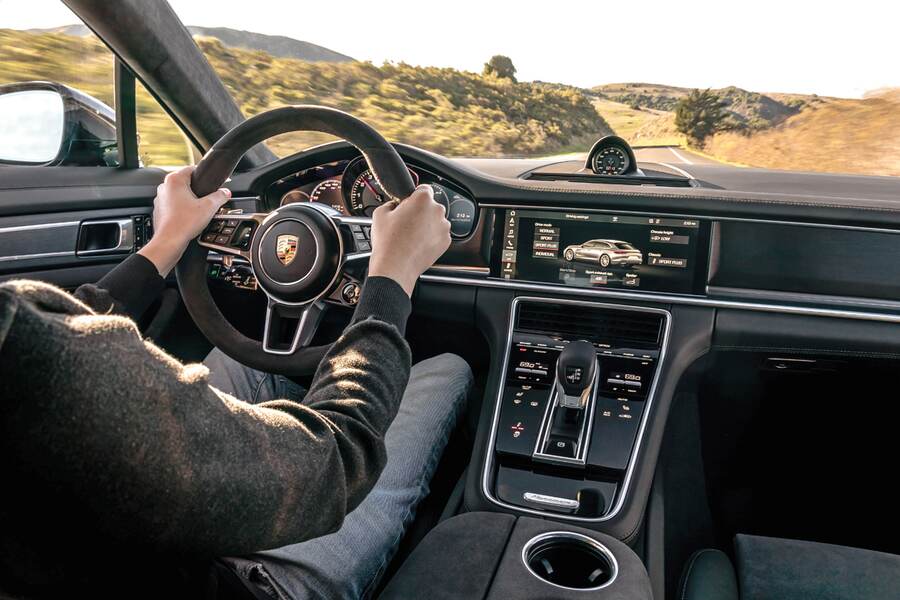 The Sport Turismo GTS’ interior is nicely laid out and features high-quality leather and Alcantara.

The Panamera and Panamera Sport Turismo’s platform is also shared within the VW Group. The MSB platform (Modularer Standardantriebsbaukasten, or Modular Standard Drivetrain System) that underpins our feature car is shared with Bentley’s current Continental GT and Flying Spur models. The Sport Turismo GTS’ power goes to a Porsche Traction Management (PTM) all-wheel-drive system via a ZF Friedrichshafen-built 8DT eight-speed PDK II dual-clutch transmission, which is also shared with the Bentleys mentioned above.

A quick walkaround of this Mahogany Metallic-hued Sport Turismo reveals lines that are somewhat reserved yet striking. Sport wagon styling can provoke negative feedback from observes due to either their function-over-form appearance or the stereotype of wagons being less than cool. Non-enthusiasts often bring up the ridiculous-looking 1979 Ford LTD Country Squire-based Wagon Queen Family Truckster from the 1983 film “National Lampoon’s Vacation” when discussing wagons. But the Sport Turismo is attractive to my eyes, and it garnered positive feedback in my week of driving. 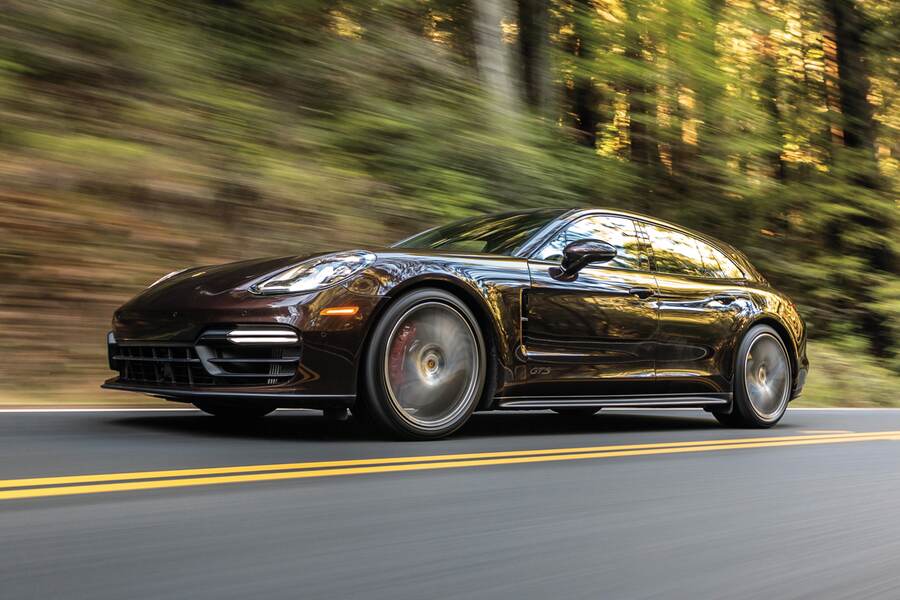 After opening the driver’s door and sliding into the standard and nicely supportive 18-way Sport seats, I find this GTS’ Alcantara and leather feels subjectively nicer than the standard leather found in other second-gen Panameras. Few, if any, critics could successfully argue against Porsche’s outstanding choice of materials and the interior’s excellent overall fit and finish. Even so, I do think that Mercedes (and Audi, in some cases) bests Porsche in terms of overall interior finish and leather type/design. I would love to see what Porsche could do to its interiors after benchmarking and exceeding the quality of the best-of-the-best offerings from its competitors. But this is a relatively small matter, as this GTS’ interior is already among the finest factory Porsche interiors I’ve experienced.

Standard features that round out the interior include a heated multi-function steering wheel and the Sport Chrono Package. The latter consists of a center dashtop mounted analog and digital stopwatch, a mode dial on the steering wheel for Normal, Sport, Sport Plus, and Individual modes, as well as a Sport Response button for a short extra burst of power, and Launch Control. The 12.3-inch touchscreen in the middle of the dash has a crisp, clear display and is very useful once you become acclimated to where everything is and how it all works.

Turning the fake key nub to the left of the steering wheel (since locking, unlocking, and engine starting can be done with the car-shaped key in your pocket), the V8 comes to life and emits a rumble from its standard Sport exhaust. The sound is a refined roar that is loud enough to enjoy without being obnoxious. In the days of smaller displacement and fewer cylinders in the quest for greater efficiency, this engine sounds far better than the 2.9-liter twin-turbo V6 found in the Panamera 4S. I slide the short shifter on the center console into Drive and hit the road. 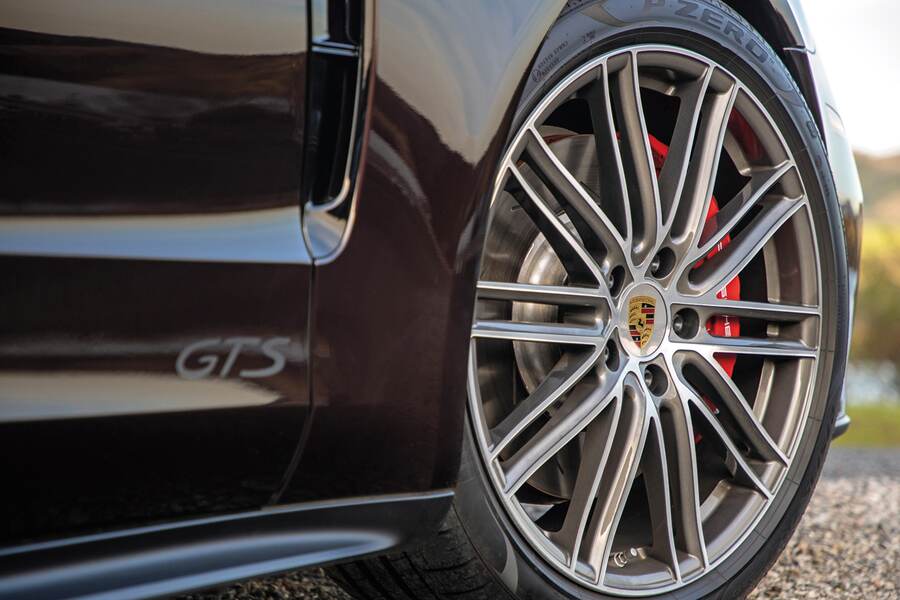 The GTS’s 4.0 V8 has a pair of turbos producing a maximum of 11.6 psi of boost, a whopping 7.2 psi less than the 18.8 psi of boost found in the Panamera Turbo’s version of this engine. Even so, merging onto the freeway is a blast, as the 4.0 makes its peak torque of 457 lb-ft from 1,800-4,500 rpm. Although that is a formidable number, the strength of this engine still surprises me. I did not expect the punch it packs to feel quite this impressive—especially considering this car weighs 4,600 lbs! Using Launch Control also yields impressive acceleration, as this car’s 3.9-second 0-60 mph time makes it quicker than every factory 911 Turbo made before 2007.

In daily driving, the GTS sits lower thanks to its Sport suspension, but it still rides very comfortably. On the backroads, this Panamera’s behavior is consistent with previous first-gen and second-gen Panameras I have driven. It feels far more planted and balanced than you would ever expect from a car of this size and weight. Yes, the suspension mentioned above paired with optional Porsche Dynamic Chassis Control Sport (which uses active electromechanical anti-roll bars) and Porsche Torque Vectoring (which automatically applies strategic braking of the rear wheels) is largely responsible for this level of performance. Even so, griping about this car’s dimensions and heft is difficult to do since Porsche has done such a masterful job of seemingly mitigating the laws of physics.

Slowing this heavy wagon down on deserted stretches of road is easy, thanks to the big steel brakes. If I were going to be pushing this car hard regularly, I’d be more inclined to pay the $8,970 for longer-lasting Porsche Ceramic Composite Brake (PCCBs). I’d also seriously consider ordering the $1,620 Rear Axle Steering (RAS) system. Although RAS wasn’t installed on our test car, it made such a positive impression on me in other Porsches in the past, that it is something I prefer on virtually all Porsches these days. The added level of responsiveness and stability is well worth the price. 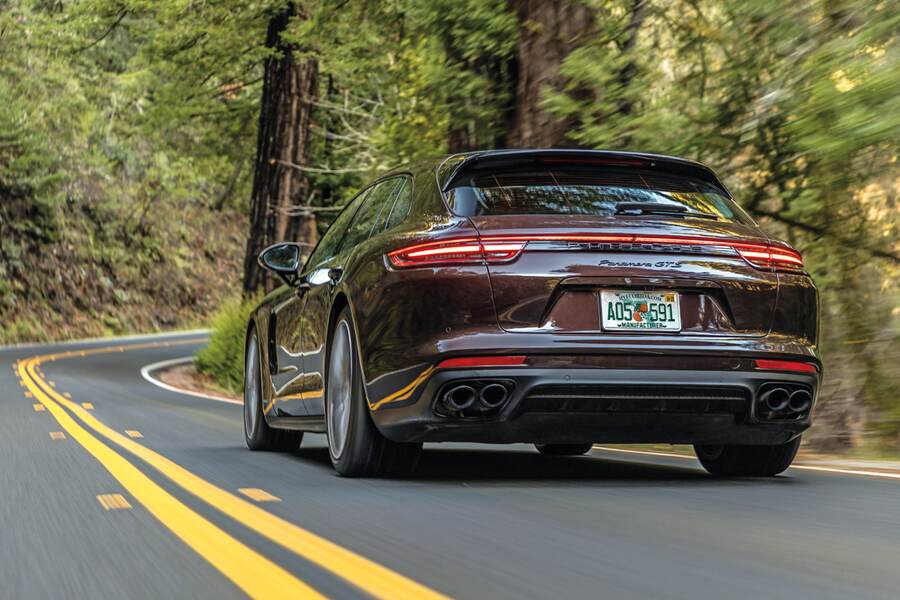 By the end of the week, I found myself referring to this Porsche as the “Muscle Wagen.” It reminded me of big-block American muscle station wagons produced by Chevy, Ford, and Dodge in the 1960s and early 1970s. Also, this Porsche’s power-to-weight ratio of 10.2 lbs/hp is consistent with the old-school standard for muscle cars, which was 10.0 lbs/hp for a machine to be considered a muscle car by some enthusiasts.

A modern Porsche obviously runs circles around those now antique machines. Still, the spirit is the same (i.e., a practical daily driver/family hauler that will launch from a standstill with fury). Although Porsches aren’t commonly thought of as cars you regularly take to a drag strip, the Sport Turismo you see here will run the standing quarter-mile in 12.5 seconds. That’s quicker than virtually every stock classic muscle car you can name.

In terms of dynamics, the GTS wagon reminded me a lot of the Panamera 4S sedan I drove for an article in the November 2018 issue (#259). The 4S and GTS are more similar than not in their ride, comfort, and balance. That’s not a knock on the GTS, as the 4S is a great car. Where the GTS shines relative to the 4S is the interior quality and the higher torque (and the glorious rumble) from the V8. 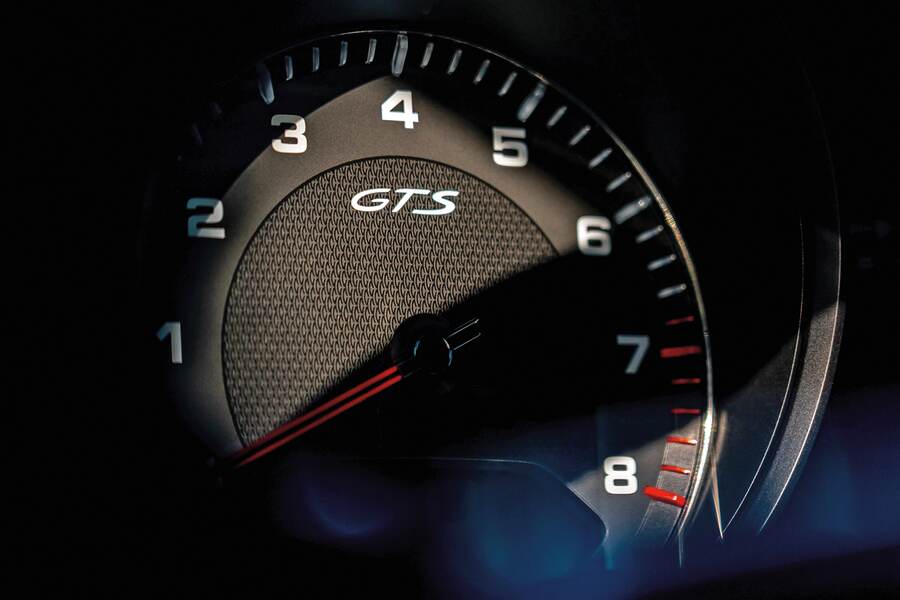 But if the GTS only outshines the 4S because its got Alcantara seats and a V8, why would anyone want one? The Sport Turismo GTS is $18,100 more expensive than the Sport Turismo 4S ($129,300 vs. $111,200). While that’s not an insignificant sum, it is worth it when considering the upgrades you get for that money. And the GTS’ price is a relative bargain when considering the Sport Turismo Turbo is only 0.3 seconds quicker from 0-60 and has a 7.0 mile per hour higher top speed than the GTS. Yet, at $157,000, it costs $27,700 more. In the end, the GTS is a sweet spot of options, practicality, relative value, and outright performance. 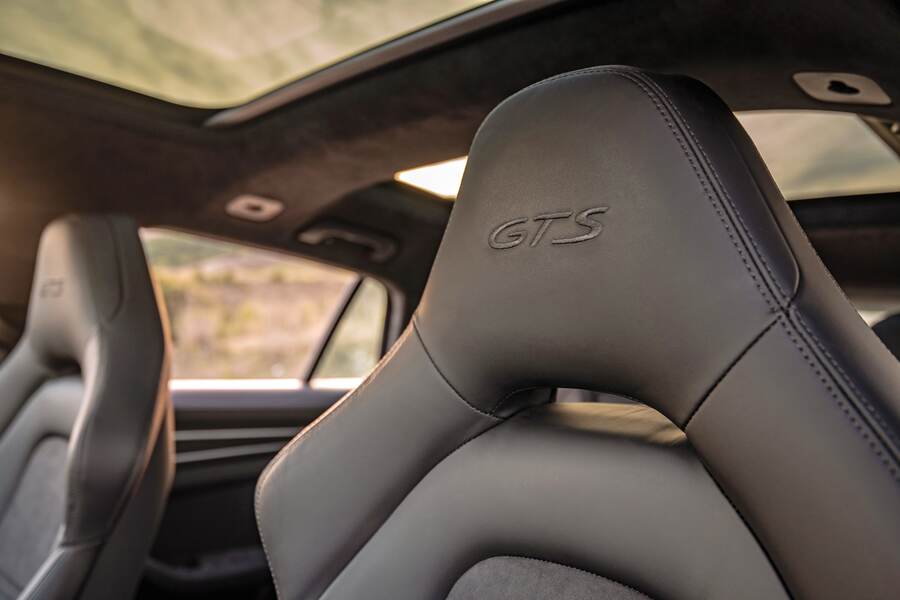 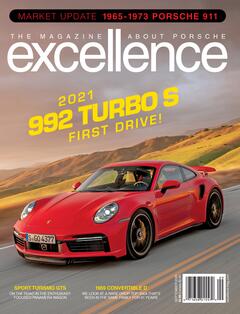