We discover what the black GTS trim does for the Panamera. 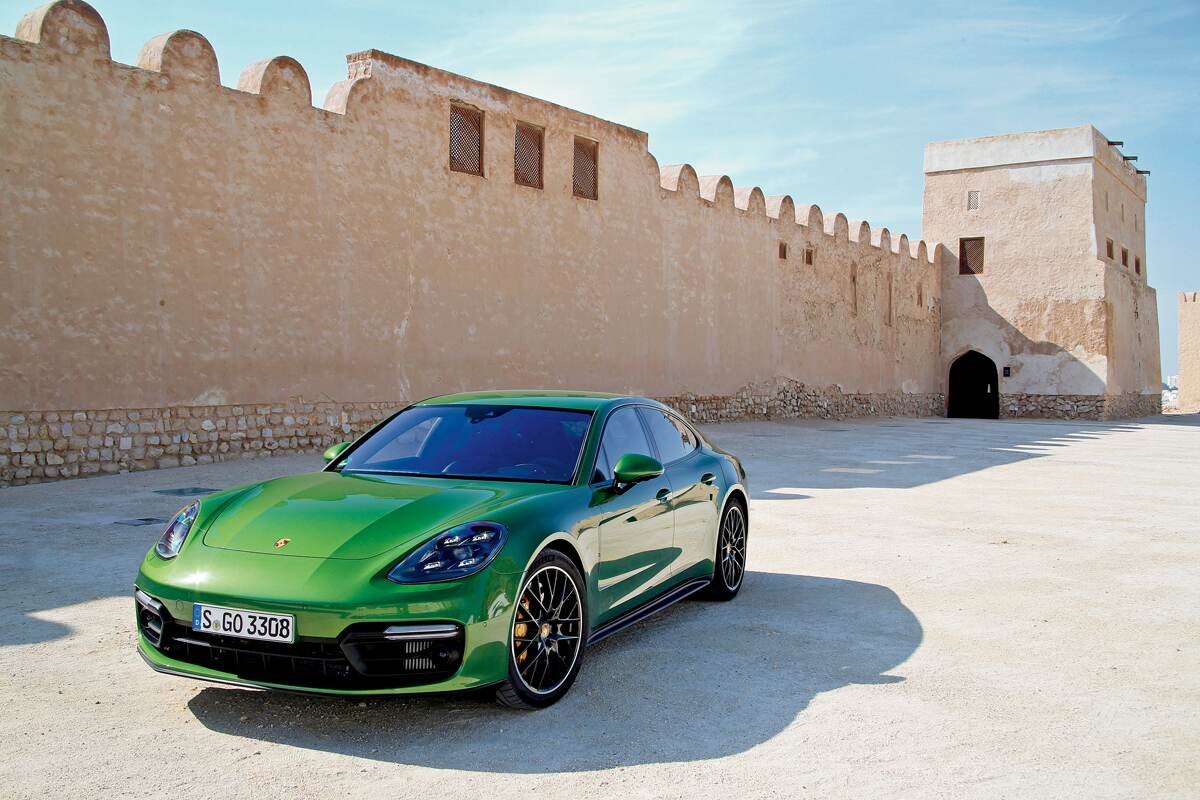 In Porsche 911 speak, the GTS label defines a variant that walks the fine line between the everyday useable comfort of the Carrera S, and the much harder edge of its track-biased GT3 and RS counterparts. In the case of the Panamera, however, the GTS moniker is applied to a more focused variant that holds the middle ground between the 4S and the autobahn-storming Turbo.

The GTS was the best drivers’ car in the original 970-generation Panamera range, and we were eager to find out if Porsche had been able to work the same magic on their latest 971-gen model. Importantly for those who need a bit more load carrying capability, there is also a GTS version of the wagon-back Sport Turismo variant. So, how do you tell a Panamera GTS from its siblings?

As with the Carrera, Boxster, and Cayman GTS variants, the black visual accents from the Sport Design package are the order of the day. This means a black background to the headlight lenses, a black rear light reflector strip between blacked out taillights, and a black lower valance insert. The 20-inch wheels are also painted black, although alternatives such as black wheels with a polished outer rim, as well as silver wheels are available too. 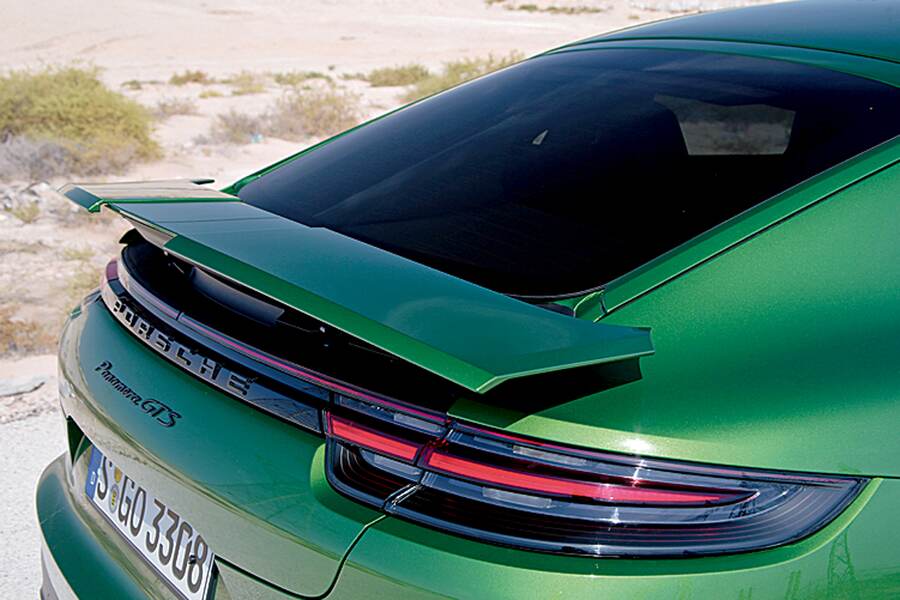 The dashboard with its big 12.3-inch infotainment touchscreen is not just modern but also downright good looking with intuitive control buttons on the center console. Small details matter in a car of this class, and we like the fact that the volume control for the audio system is a practical knurled roller knob rather than a push-type digital volume control that can be hard to operate on the move.

Inside, the GTS look consists of black leather seats with Alcantara centers, Alcantara headlining, and an Alcantara-wrapped steering wheel rim. A good option to tick the box for is red seatbelts, red stitching for the seats, center console and dashboard, as well as the GTS lettering in the headrests since this delivers a splash of color to the otherwise monochromatic trim. The optional carbon-fiber inserts for the doors, center console and doorsill panel inserts add further perceived value to this high-quality cabin.

A new feature introduced for the first time on a Panamera and available as an option on all models is the Head-Up Display (HUD). This allows you to have up to six functions projected onto an area perceived as being 7.5 feet in front of the driver on the road ahead. 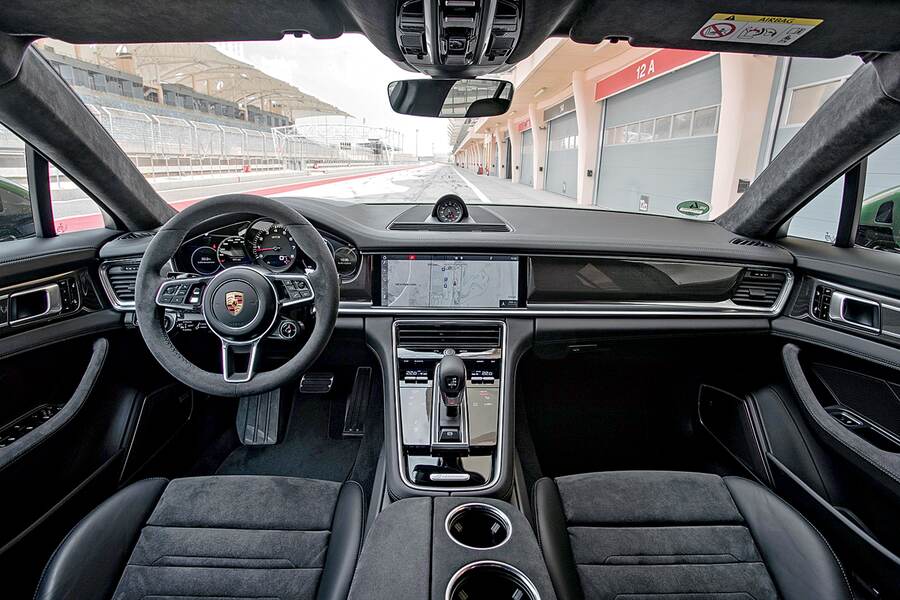 The deep growl of a cross-plane crank V8 has been a Panamera GTS hallmark from day one, and nothing has changed in this respect. But recent emissions and fuel economy demands have resulted in downsizing, and a twin-turbo V6 now powers the Panamera 4S. Because V8 power is such a vital part of the GTS hallmark Porsche had to come up with an alternative. The solution was to install a detuned version of the 4.0-liter V8 from the 550 hp Turbo. The engine hardware right down to the turbochargers between the cylinder heads is identical, with the wick turned down via ECU mapping.

The reduction in boost pressure from 18.8 psi to just 11.6 psi means that the GTS’s engine has a significant amount of headroom, and the engineers use some of this to ensure the car is able to maintain its full performance irrespective of altitude. This means that every single one of the 453 horses will be present and accounted for when you are charging Alpine passes in summer. It also means that the Turbo cooling system is over-specified for the GTS engine output, so race track stints or flat out autobahn driving in high ambient temperatures will likely never be an issue.

The new Panamera 4S, GTS and Turbo all use the same ZF eight-speed PDK dual-clutch transmission, with the clutch sized according to power and torque. This means the GTS clutch occupies the middle ground, with the Turbo-spec engine mated to the beefiest clutch, and the smallest unit absorbing the output of the base 3.0-liter twin-turbo V6. The clutch will be the Achilles Heel for aftermarket tuners who will want to uprate the GTS engine to Turbo output levels or more. 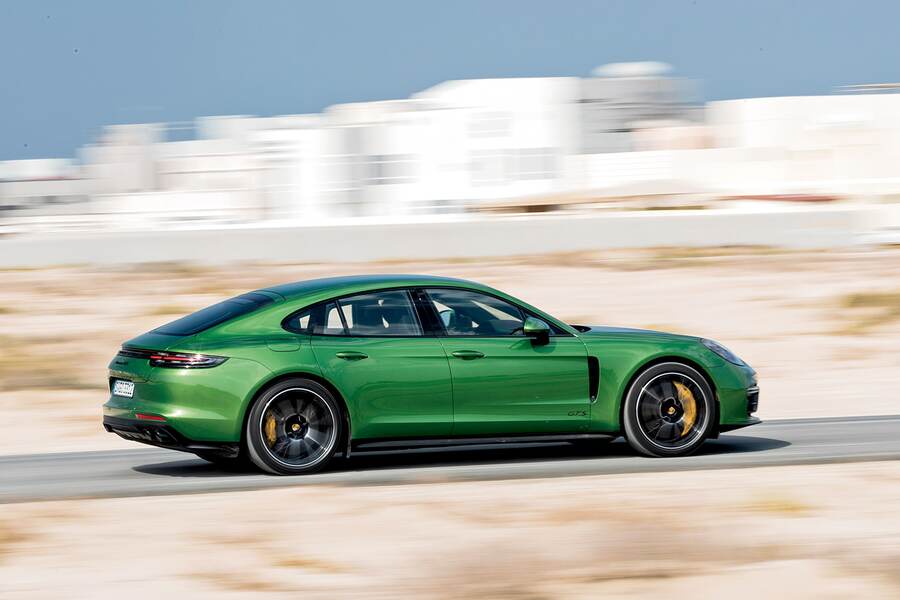 In the GTS-spec Sport Turismo, you can have a spacious load carrier with no compromise in driving enjoyment. Tipping the scales at 4,464 lbs, the 66-lb heavier and marginally less aerodynamic GTS Sport Turismo (Cd 0.33 vs. 0.31 in the sedan) has an identical 0-60 mph time, but takes 0.1 and 0.2 seconds longer to get to 100 mph and 125 mph respectively, and is two miles per hour down in top speed.

To sharpen up handling in line with the GTS philosophy of sporting comfort the three-chamber air suspension and anti-roll bars receive recalibrated settings aimed at improving driver engagement without unduly compromising ride quality. The core of this bespoke GTS setup sees the ride height reduced by 10 mm (0.4 inch) compared to the Turbo. Importantly, the bump stops are shortened by the same amount so that wheel travel is not compromised. 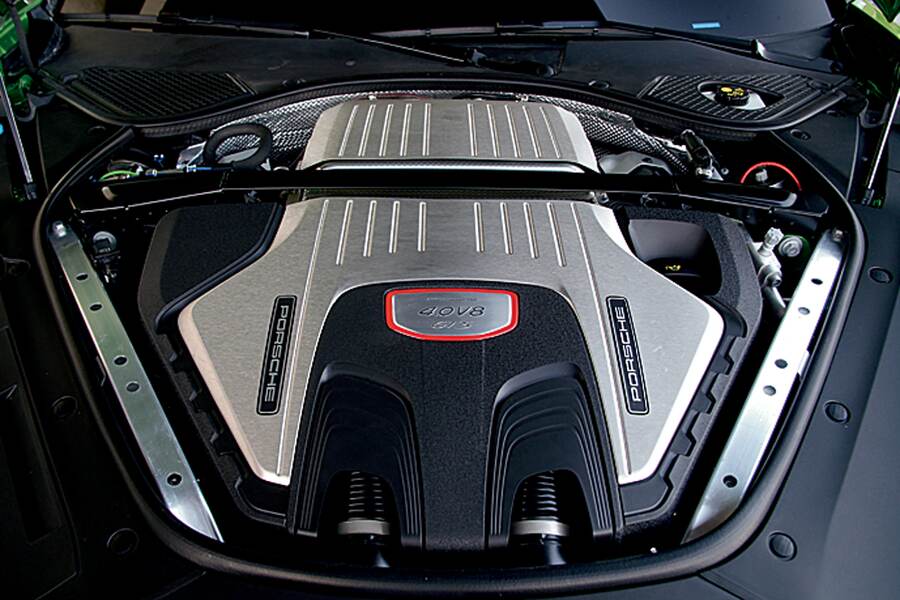 For ground clearance reasons the minimum safe dynamic ride height in Sport Plus mode is unchanged over the Turbo. To put this in perspective, while the ride height of the Turbo drops by 28 mm and 20 mm (1.1 inches and 0.79 inch) front and rear respectively when Sport Plus is engaged, since the GTS starts off 10 mm lower in Normal mode, it only drops 18 mm in front and 10 mm (0.7 and 0.4 inch) in back when Sport Plus is engaged.

Beyond these hardware upgrades, the other changes are electronic control applications. For instance, the standard fit PASM (Porsche Active Suspension Management) is set up to offer greater damper force resistance at any given point in its curve. Porsche’s philosophy of delivering a more sporting ride with no change in the overall ride characteristics results in comfort via improved body control.

As on other Panamera models, active rear steering is an option and noticeably helps this big, heavy car rotate into slow bends with a greater feeling of agility while aiding stability at high speed. 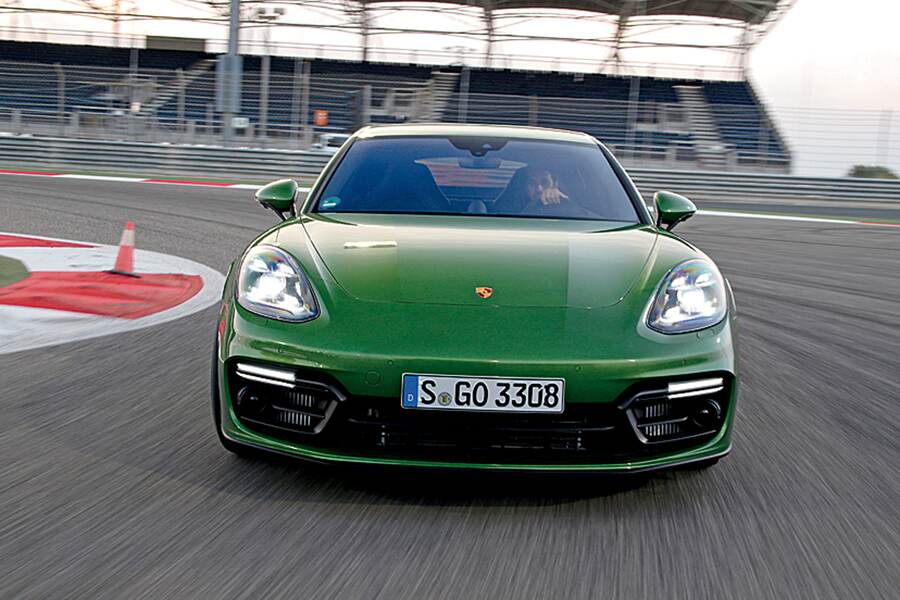 Beyond the lower ride height and more sporting damper characteristics, the handling balance of the GTS has been fine-tuned using uprated anti-roll bars and a remapped Porsche Traction Management (PTM) system. As with the Turbo, the anti-roll bars are hollow to save weight. The GTS-specific front bar is increased in diameter from 21.5 mm (0.85 inch) to 24.0 mm (0.94 inch), with no change to its internal diameter. The revised rear bar maintains the 26.5 mm (1.1 inch) outer diameter of the Turbo bar, pairing this with a smaller inner diameter to increase its gauge and hence stiffness. These anti-roll bar changes aim to reduce understeer and improve turn-in.

Importantly, the suspension of all Porsche cars is set up so that in maximum effort cornering the bump stops of both front and rear axles are reached at the same time as calculated by wheel travel. This arrangement avoids handling issues caused by one axle hitting the bump stops before the other and ensures that the car has a linear characteristic velocity for user-friendly limit handling. With less torque being fed to each wheel by the detuned V8 engine the PTM mapping has been recalibrated to send a bit more power to the rear in Sport and Sport Plus modes. This greater rearward power bias makes the GTS feel even more sporting.

While the lower ride height and center of gravity reduce the roll angle and linear and diagonal weight transfer, it also helps aerodynamic stability and reduces drag. The GTS also inherits the active three-piece rear wing from the Turbo to counter lift over the rear axle at speed. 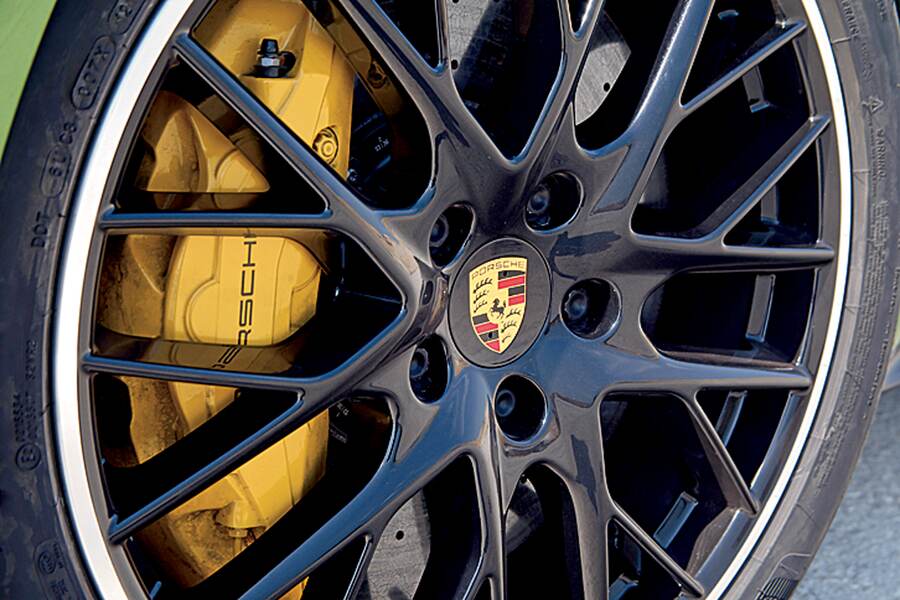 Our comprehensive test route to the Bahrain International Circuit took in-town and highway driving where the Normal suspension setting displayed a high level of ride comfort despite the big 9.5J and 11.0J x 20-inch wheels shod with 275/40ZR20 and 315/35ZR20 Michelins. While 21-inch wheels are a factory option, the 20s look big enough and are less vulnerable to road imperfections.

The calibration of the three-chamber air suspension has been carried out to perfection to produce a supple secondary ride with good low-speed bump absorption. The tightened up damping curve means that Normal is now a good all-around setting for road use below the level where we would select Sport for aggressively attacking a twisty road. While taking a big, heavy sedan around a race track definitely falls into one of those fish-out-of-water scenarios, the Panamera GTS took to the technical corners of the Bahrain International Circuit—site of the Bahrain Grand Prix—very well.

This 3.4-mile long track with nine right and six left corners has been on the Formula One race schedule since 2004. Amongst these 15 corners are two very technical slow bends that are tough in an F1 car whose huge aerodynamic downforce is out of the equation at these low speeds. They are also tough on a large, four-door road car that tips the scales at three times the weight of an F1 race car. In both cases, you need to be smooth with steering inputs, accurate with your lines, and restrained with the throttle. 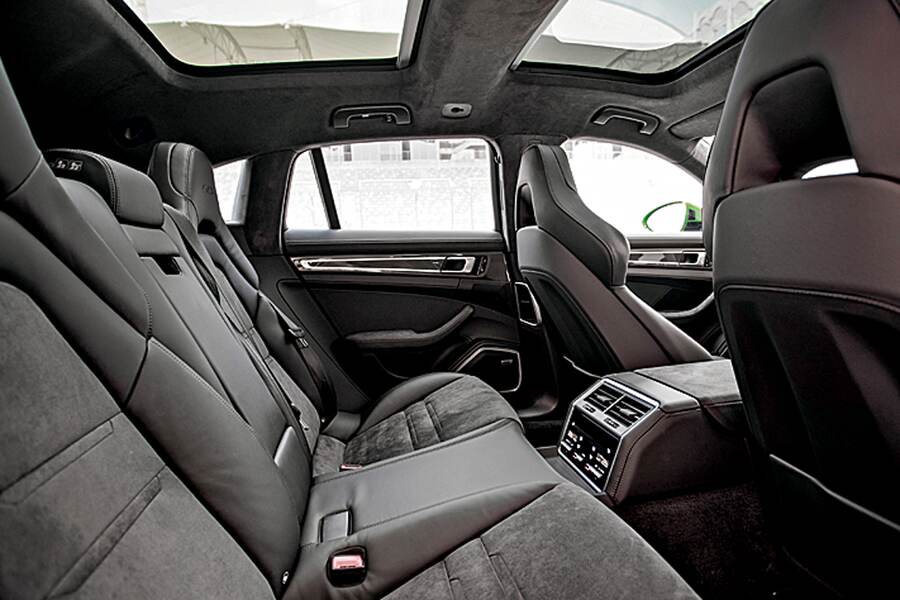 With Sport Plus duly engaged, the slow Turn One going into Turn Two sequence is the trickiest and most technical part of this track for a 4,398-lb car with little or no downforce. Keeping your speed in check and not being greedy with the throttle is the secret here, and you have to make full use of the Panamera’s precision and all-wheel-drive traction before unleashing all the horses towards Turn Three. The rest of the track is fast and flowing. You just have to be patient in the two long, medium-speed bends where you have to hold the car on the edge with constant throttle in third gear to avoid understeer or oversteer.

The other tricky section is the approach to Turn 10, the second slow bend where you have to brake hard, initially in a straight line away from this slow, distorted U-shaped left-hander, and then curving to the left. As you approach the final turn-in point under trailing braking, just before you downshift to second and turn into the tight left-hander, you are still trail braking to rotate the tail. Carrying too much speed into this tight 90-degree left-hander will result in understeer, and if you miss the apex here, you will run wide and screw up your exit line, which will affect your terminal speed at the end of the subsequent straight.

What was most apparent on track is just how agile and responsive the Panamera GTS is in an environment where big luxury sedans usually are way out of their depth. If anything, the long straights of this Hermann Tilke-designed Formula One fixture showed up its relative lack of power to gobble up the long straights. That said, while power is something the Turbo and especially the Turbo S E-Hybrid make up for, they are less able to deploy it on track thanks to their more comfort-oriented chassis settings. 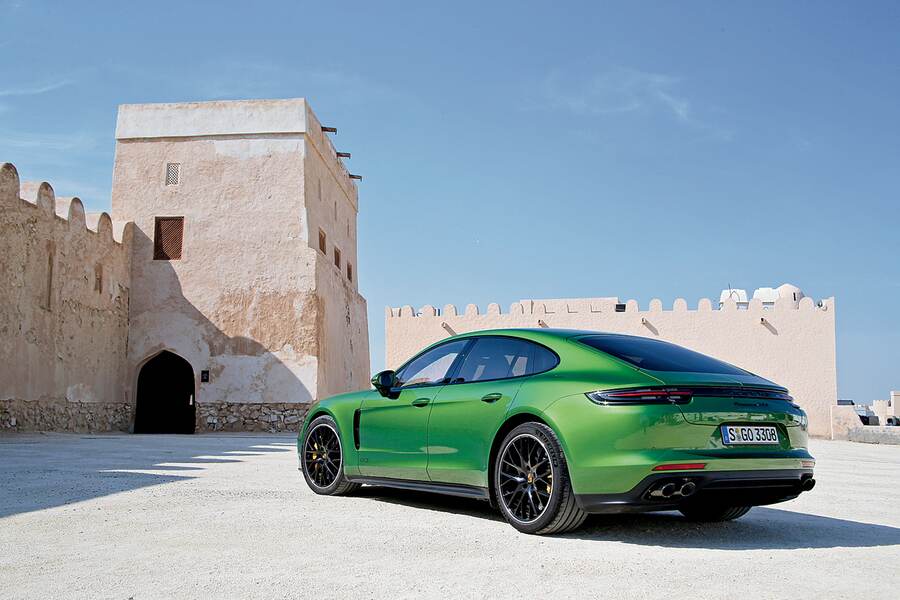 For the record, my best lap time in the new Panamera GTS was 2 minutes and 35 seconds. Compare that to the 1:27.96 lap posted by Sebastian Vettel in his 2018 Ferrari SF71H and you can see the huge difference between a fast sports sedan and a current 900+ hp F1 race car weighing about a third as much, with massive downforce and slick tires!

With a growling V8 soundtrack, sporting chassis, and distinctive GTS design elements, the new Panamera GTS is a true spiritual successor to the original. Offering a Sport Turismo version only adds to its versatility and appeal, and the new GTS should further increase the 15 percent of Panamera sales earned by its also truly engaging predecessor. 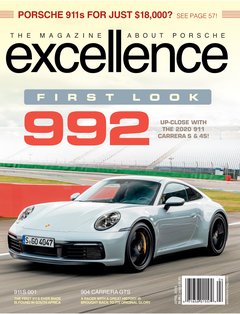