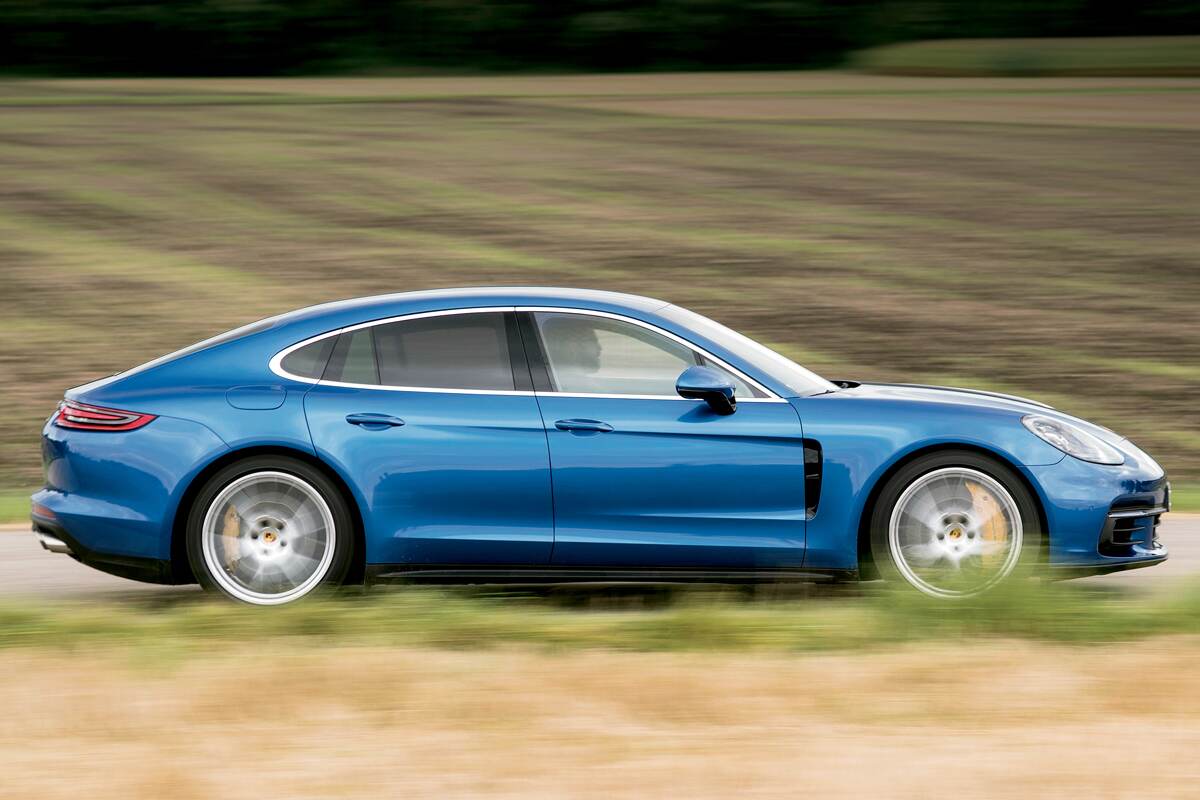 The second-generation Panamera, also known as the Type 971, is more powerful, faster, and is more elegantly styled than its first-gen Type 970 predecessor. It’s available as a standard wheelbase sedan, a longer wheelbase “Executive” four-door, or a five-door “Sport Turismo” shooting-brake wagon. For power, it’s offered with either a 2.9 or 3.0-liter V6 or a 4.0-liter V8 (all of which are turbocharged) or the 2.9 V6 or 4.0 V8 paired with a hybrid setup. To get to the core of what the 971 Panamera is like relative to the 970, I spent a week driving a new Panamera 4S.

The 440-hp 971 Panamera 4S is the Porsche sedan’s middle trim level. It’s positioned above the single-turbo 3.0-liter 330-hp base models and below the 462-hp 4 E-Hybrid, 550-hp Turbo, and 680-hp Turbo S E-Hybrid. Despite having fewer options than its more powerful stablemates, it still comes standard with an impressive list of features.

To start, the 4S has an aluminum 2.9-liter twin-turbo V6 that puts out 440 horses and 405 lb-ft of torque—more than the 911 Turbo produced just over a decade ago—mated to an eight-speed PDK dual clutch automatic transmission. Power is sent to all four wheels via a Porsche Traction Management (PTM) all-wheel-drive system. Underneath, a Porsche Active Suspension Management (PASM) suspension with steel springs (air suspension is optional), Porsche Stability Management (PSM), and Integrated 4D chassis control (an advanced electronic real-time ride-control system) also come as standard fare. 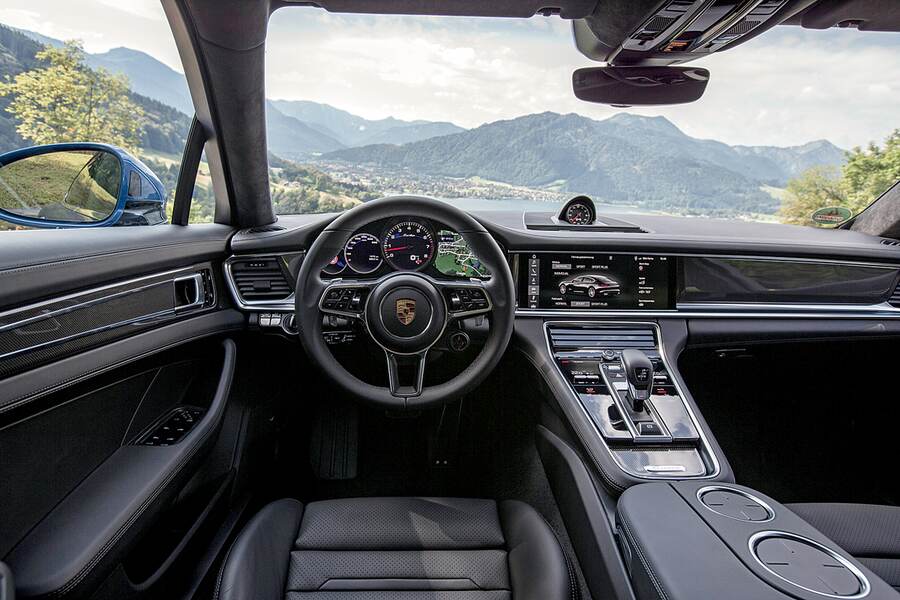 Give the steel and aluminum body a look, and you’ll notice its more 911-like roofline as well as design elements shared with other current Porsche models, like the three-dimensional “PORSCHE” letters on the rear center light strip. Scan the rest of the exterior and you’ll spot standard LED (light emitting diode) head and taillights and a panoramic roof. Sure, that’s all well and good, but what’s it like from behind the steering wheel?

In the Driver’s Seat

Opening this 4S’s driver-side door reveals optional 14-way massaging bucket seats with five settings (Stretch, Wave, Shiatsu, Lumbar, and Shoulder). While such a feature may seem out of place in a Porsche, it fits the overall character of the car. It’s an amenity that bridges the gap between the sportiness that is expected from a Porsche and the luxury necessary to be competitive against top sellers like Mercedes-Benz’s E- and S-Class sedans and BMW’s 5- and 7-Series four-doors. 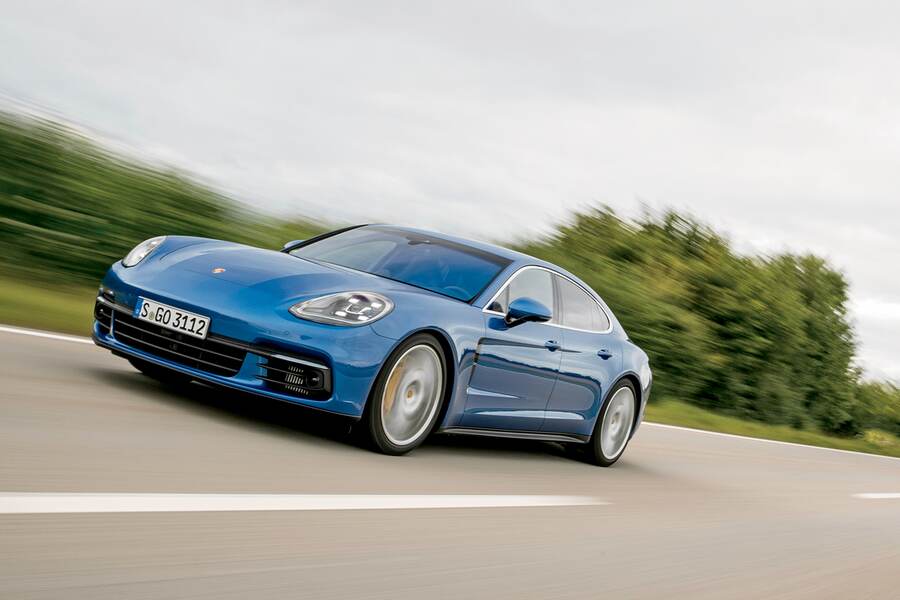 Looking around the cabin reveals top-notch materials with an excellent fit and finish. Gone is the 970-generation’s array of 44 buttons on the center stack. The 971 gets a smaller, slicker-looking center console panel with only a few toggle switches and embedded buttons, mostly for the HVAC system and seat heating. Some of the functions that used to be controlled by the center buttons are now accessed via a 12.3-inch touchscreen mounted in the center of the dashboard. There is a slight learning curve to navigating the menus, but it’s nothing that can’t be overcome after a few days of use. Two additional 7.0-inch display screens are located on either side of the analog tachometer that is situated in the center of the dashboard.

Firing up the engine produces a sound that is remarkably similar to a contemporary 911 at start-up. The note from the Sport exhaust is slightly more refined and seems subjectively a few decibels lower than the one that emanates from a new Carrera. Regardless, it’s the kind of sound what you want to hear from a sports sedan in the morning. I disengage the electric parking brake, shift the short PDK shifter into Drive and set off for a week of driving on both the freeways of California as well as stints on state highways and some rural backroads.

Merging onto the highway and changing lanes feels effortless. This new Panamera is more than adequate in terms of horsepower and torque. Power delivery is excellent, as it feels immediately accessible in all its forward gears, thanks to its 405 lb-ft being available from 1,700-5,500 rpm. Shifts from the PDK are also smooth. But shortly after exiting the freeway on the way home, I get a taste of how well the brakes work. 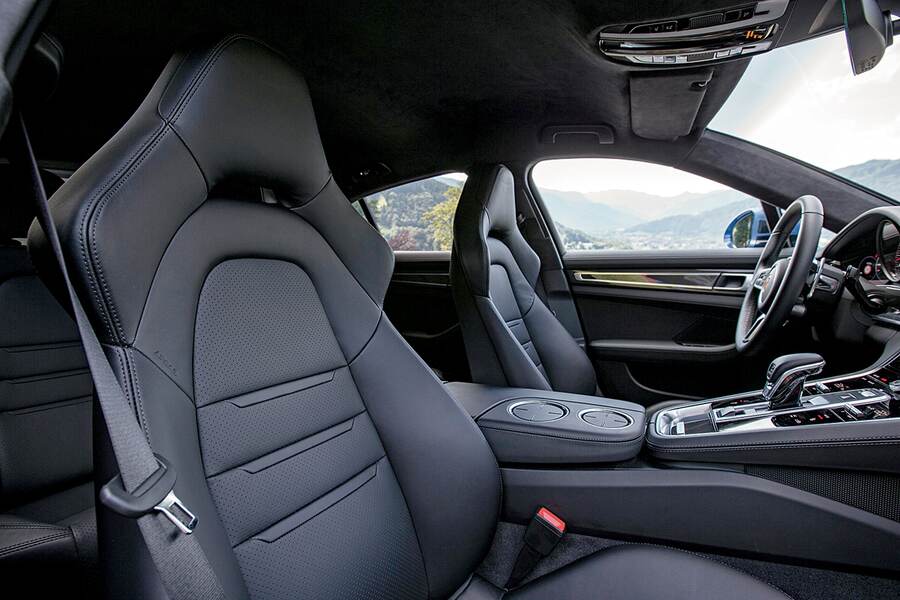 As I near the turn into my driveway, a person runs a stop sign behind a traffic-obscured intersection right in front of me. Although I’m only going 25-30 mph, I stomp hard on the left pedal. While there is a moment where I’m convinced the front bumper is about to get run into, it remains intact thanks to brakes that bring a two-ton car to a stop before the impact zone. The other driver waves to say they’re sorry, and I head home.

The next morning I’m on my way down California’s State Route 1 (a.k.a. Highway 1) en route to Santa Cruz. The plan is to hit some stretches of backroads along the way. In the “Normal” chassis setting this Panamera is very comfortable. It’s not Rolls-Royce Phantom smooth, mind you, but it’s reasonably comparable to a Mercedes. Although it may not be exactly S-Class refined, that’s actually a good thing, as the Panamera still feels enjoyably sporty in terms of feel and response, even when in ‘comfy mode.’

Switching into Sport and then the Sport Plus settings make the car feel like it consciously changes from a sports-luxury sedan to a sports car. The throttle response sharpens and the active suspension feels like it firms up. Pushing moderately through a short stretch of twisty rural two-lane produces flat, level cornering. The variable power steering setup is crisp, responsive, and nicely weighted. And with the addition of optional rear-axle steering, this Panamera feels even more agile than it did in the previous generation. There is no doubt that you are in a sedan, of course. But it is impressive how Porsche has made a large, front-engined, all-wheel-drive, four-door car feel relatively similar to a 911. 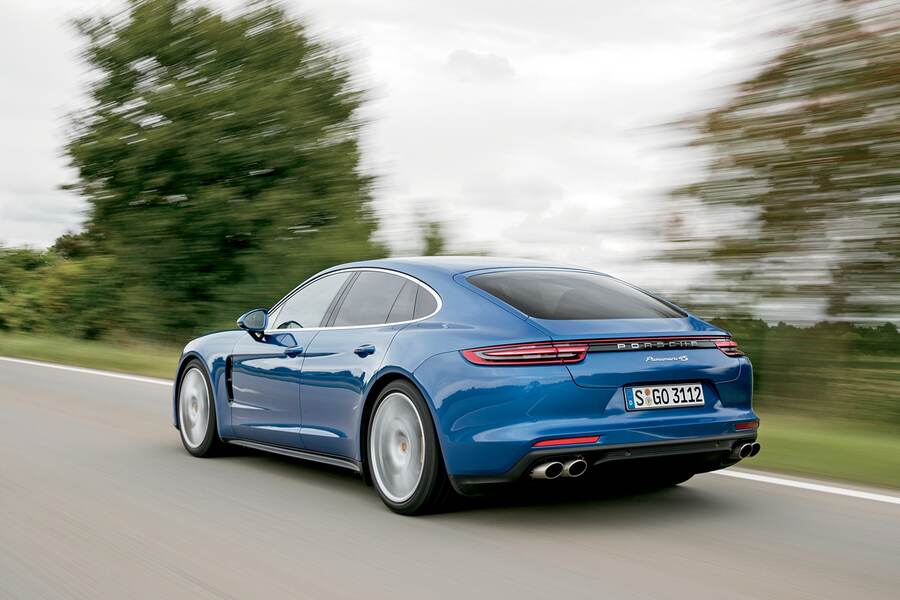 But where 911s wearing even subdued paint jobs get a fair amount of attention from others, the Panamera is mostly under the radar. In my week of driving, just two people asked about or commented on this 4S. Questions pertained to the car’s model year, horsepower, and price. Comments were about how attractive the new generation of Panamera looks—“especially compared to the old one,” remarked one interested observer.

Besides its freshened looks and boosted power, the Panamera also has some moderately to wholly advanced technology. I start exploring it by trying out Night Vision Assist, which uses a thermal imaging camera on the front of the car to detect infrared radiation. The image from that camera is then transmitted to the right dashboard screen. While this feature isn’t useful to me on my drive, I do see its value for those who frequently travel on unlit roads or have trouble seeing clearly when driving at night.

Another piece of unique advanced assistance tech is Lane Keep Assist, which “is a camera-based system for automatic detection of divider line markings on the road,” according to Porsche. It detects if you’re inadvertently leaving your lane and automatically intervenes to keep you on the road when needed. Like the night vision camera, it’s not a daily use item for many people, but it’s perfect for drivers who rack up lots of miles and like the added safety of a system that will keep them on the road if they ever become distracted or doze off behind the wheel. 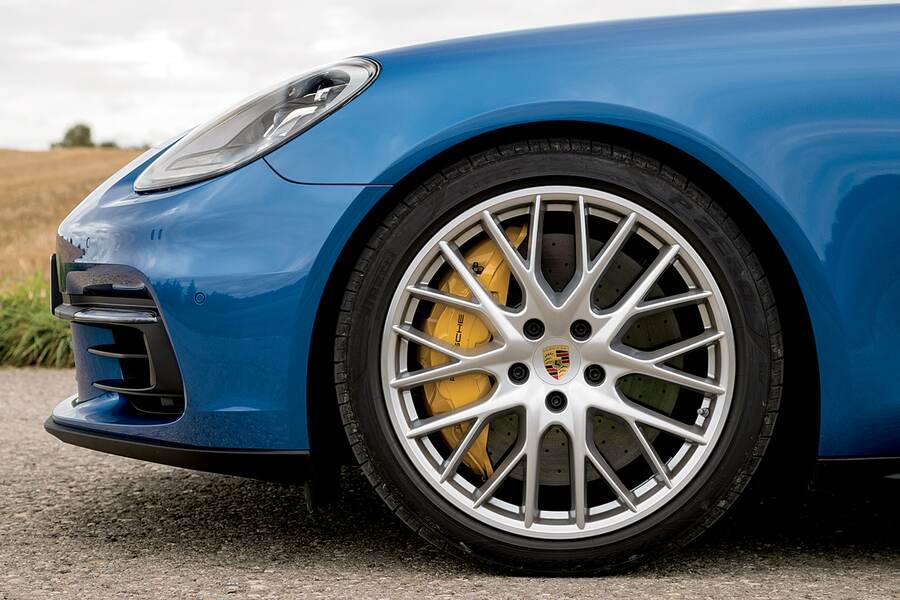 As the week progresses, I find that the reclining rear seats feel just as comfortable and spacious as the ones in front, the trunk has a nicely-sized 17.4 cubic feet of space, and that an overall real-world fuel mileage of 23 miles per gallon is achievable. The fact that a reasonably large 440-hp sedan gets decent mileage (even after pushing it quite a bit) is further testament to the fact that this car is a practical, eminently daily drivable machine that also has Porsche DNA that you can feel every time you rev its engine, take a corner, or press the gas pedal firmly.

Are there any dislikes? Putting the car in Park by pressing a button on the back of the gear lever instead of shifting it into “P” takes some getting used to. The large HVAC vent in the front portion of the center console seems like it’s always blowing out too little or too much air and takes some fiddling with on the center touchscreen to get right. And the chrome trim around the windows subjectively looks more “Audi” than “Porsche” on this car. But these are all minor details.

The 970-generation Panamera was a great car to drive, but many people criticized its styling. Regardless of what people thought of how it looked, the first-gen Porsche sedan was an outstanding machine. It sounded, accelerated, stopped, rode, and handled better than you would think a 4,000+ pound vehicle ever possibly could. So, does the 971-gen cars live up to the excellent performance of its predecessor? Or has the new Panamera lost some of what made the 970 such an exceptional machine? 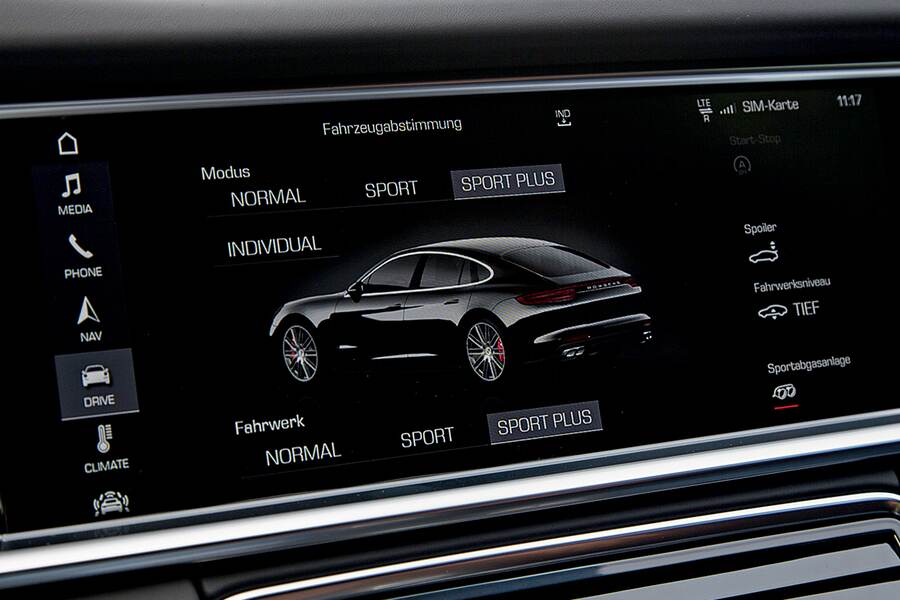 The brakes feel equally as good or marginally better than those found on the 970. And that’s not a knock on the 971, as the first-gen car was excellent in that regard. Lastly, the ride in the new 4S is seriously comfortable and would likely impress most people who went for a ride in it set in Normal mode. At the end of the day, the 971 picks up where the first-generation left off. While it may not be everyone’s cup of tea, the new Panamera is undoubtedly a superb sports sedan and—more importantly—it is without a doubt a Porsche through and through. 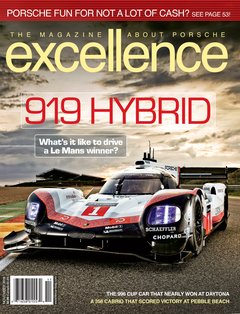