A look at how the bodywork for Porsche’s Cup car for the street has evolved. 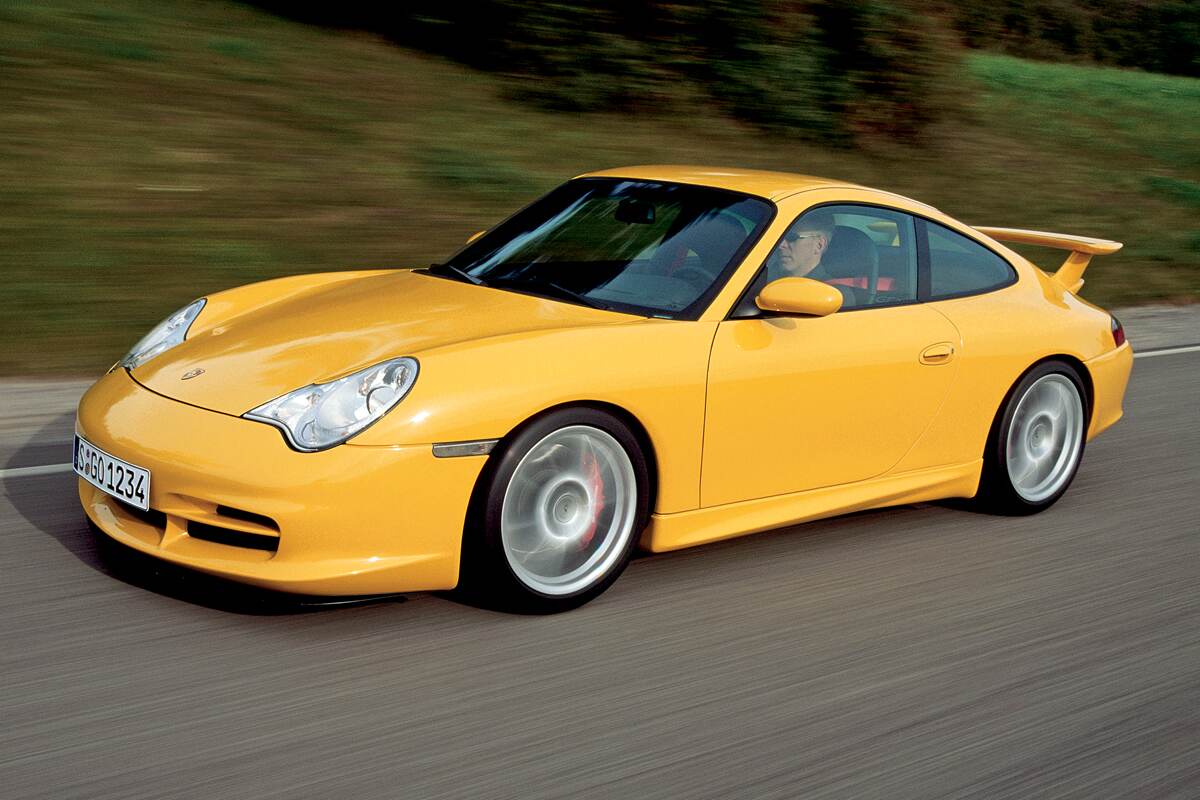 The GT-series cars pose a unique challenge to Porsche’s aerodynamicists. Low aerodynamic drag is always desirable, yet the reduction of aerodynamic lift (or even the generation of aerodynamic downforce) is desirable to improve stability at high speeds and enhance cornering grip. The high specific output of the GT engines requires a large amount of ambient intake air charge and efficient heat exchangers for both engine and transmission cooling, all of which add drag.

Nonetheless, Porsche’s engineers have always managed to deliver an efficient aerodynamic package for the GT cars, aided by parallel development with the company’s 911-based Cup, RS, and RSR racing cars. This is especially remarkable when considering the constraints imposed by the production 911 bodyshell and strict homologation rules dictated by the various sanctioning bodies of the racing series in which these cars compete. 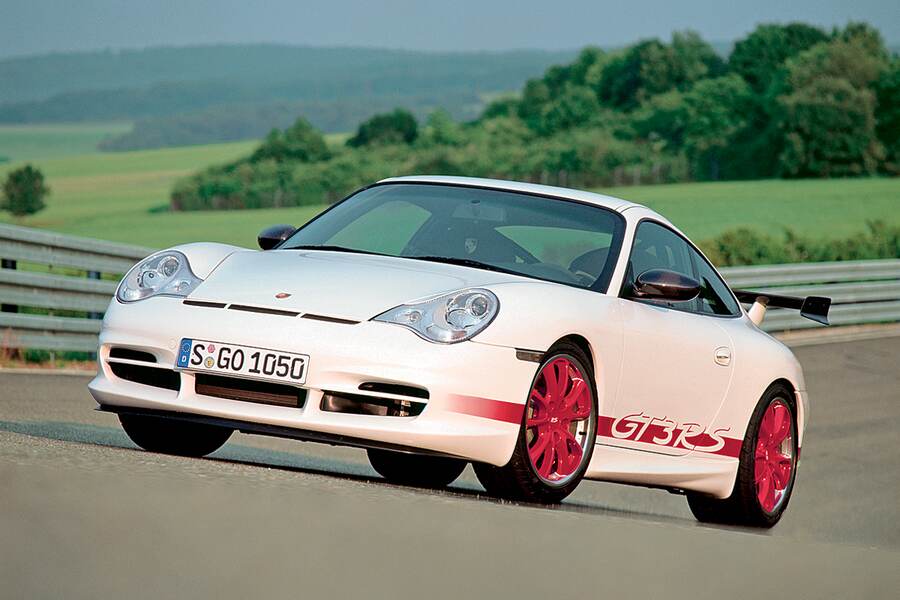 The GT3 built on the base 996’s use of large plastic underbody panels to smooth airflow underneath the car while directing cooling air to the transmission. A prominent front chin spoiler was used to deflect airflow under the car and reduce lift (and began the unfortunate tradition of the GT front spoiler being a sacrificial member during contact with the driveways and dips encountered during street driving). The GT3’s 30-mm (1.2-inch) lower ride height also served to reduce the frontal area and reduce unwanted airflow underneath the car.

The 996 GT3’s less obvious aerodynamic details also mattered. As in the normal 996, airflow exiting the radiators was directed towards the front brakes by ducts in the wheel housing liners (with the GT3 featuring partially enclosed brake cooling ducts for better heat dissipation from the brakes). This system also served to reduce pressure buildup in the wheelhousing for reduced aero drag and lift. Specially-shaped side skirts help to direct air around the wide rear wheels smoothly. 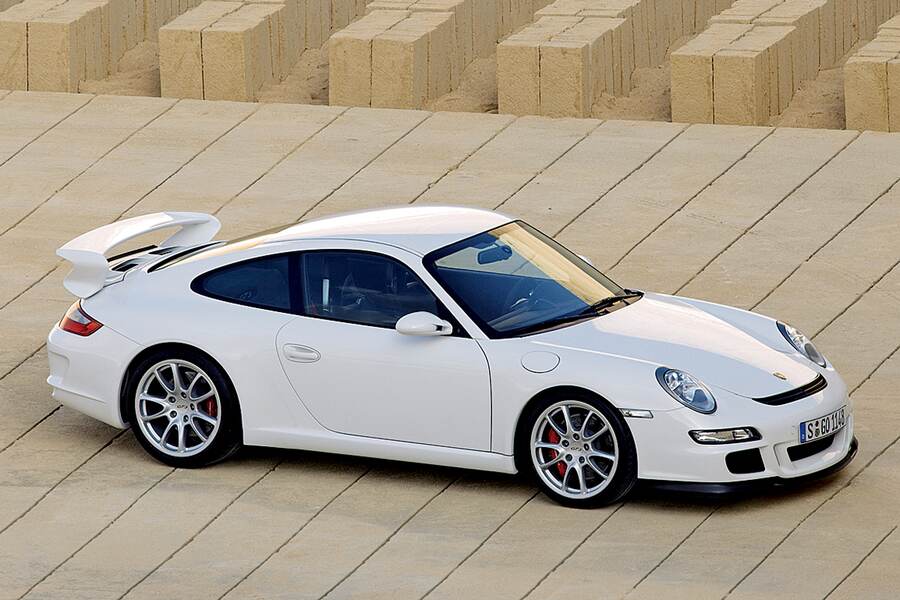 The 996 GT3’s rear wing was developed in the wind tunnel to reduce rear-end lift to near zero at top speed while minimizing added drag. In fact, Porsche managed to maintain the same 0.30 coefficient of drag (Cd) as the base 996, despite the additional aero aids. The rear wing also had three different angle-of-attack settings to alter its effectiveness.

A limited-edition 996 GT3 RS road car was offered to the RoW market in 2003 as a homologation special to legalize the contemporary GT3 RSR race car. Among the homologated items were a redesigned front bumper cover with revised grille openings and ducting, along with a prominent rear wing constructed from carbon fiber. Both measures served to produce a modest amount of positive downforce at top speed, with a minimal increase in aerodynamic drag.

The 997 GT3 of 2007 built upon the foundation laid by its 996 predecessor. A revised front bumper cover helped to channel air through a third, centrally-mounted radiator; the airflow was directed upward and out of a vent in front of the front trunk lid to reduce the amount of airflow under the car. When combined with a revised plastic chin spoiler, these measures helped to generate a slight downforce at top speed. 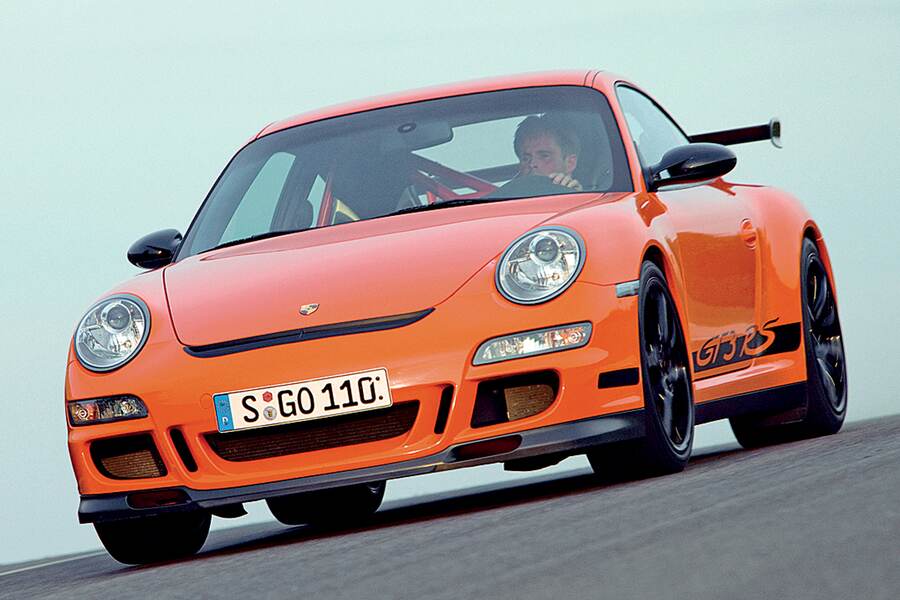 A revised rear spoiler was adjustable to either three or six degrees from the nominal horizontal setting to improve downforce for race track use. To further enhance downforce at the rear, a small “Gurney flap” was used at the trailing edge of the rear engine lid (below the main rear wing element) to keep the airflow attached to the body as it passed under the rear wing.

The 997 GT3 RS of 2008 again served to homologate its racing cousin, and unlike previous GT3s was based on the Carrera 4 body shell; in the case of the 997, this meant wider rear fenders of the 4S model. A more prominent front spoiler and rear wing meant that this 997.1 GT3 RS was the first road going GT-series Porsche to develop a meaningful level of downforce, with 33 lbs in the front and 88 lbs at 186 mph. Porsche’s aerodynamicists achieved these figures while maintaining a Cd of 0.30, which is remarkable when considering the GT3 RS had wider rear fenders and tires than the standard GT3.

The entire 997 series received a mid-cycle refresh for 2009, and in 2010 a revamped GT3 was introduced. The 997.2 GT3 featured racy details such as standard center-lock wheels, which was backed up by a track-ready aero package. A deeper splitter added downforce at the front, with the revised front fascia further improving airflow through all three radiators. 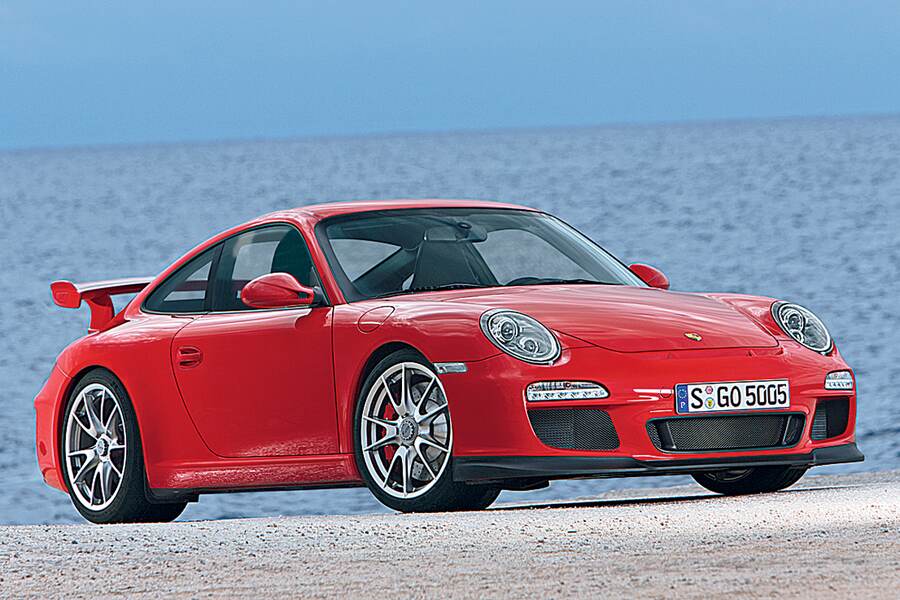 The 997.2 GT3 was available with an optional pneumatic front-end lift system. Activation of a console-mounted switch would quickly inflate small air springs atop the front suspension struts, which would raise the front end by 1.2 inches, with the goal of increasing the interval between front lip spoiler replacements.

The 997.2 GT3 RS homologation special kept the ball rolling with an even wider, taller rear wing mounted atop lightweight struts. To improve front-end grip, a wider track was utilized, which required one-inch-wide front fender extensions and thus came with a slight drag penalty. However, the 997.2 GT3 RS developed nearly 350 lbs of downforce at 186 mph (split about one-third at the front, two-thirds at the rear), which was exceptional for a road going car. 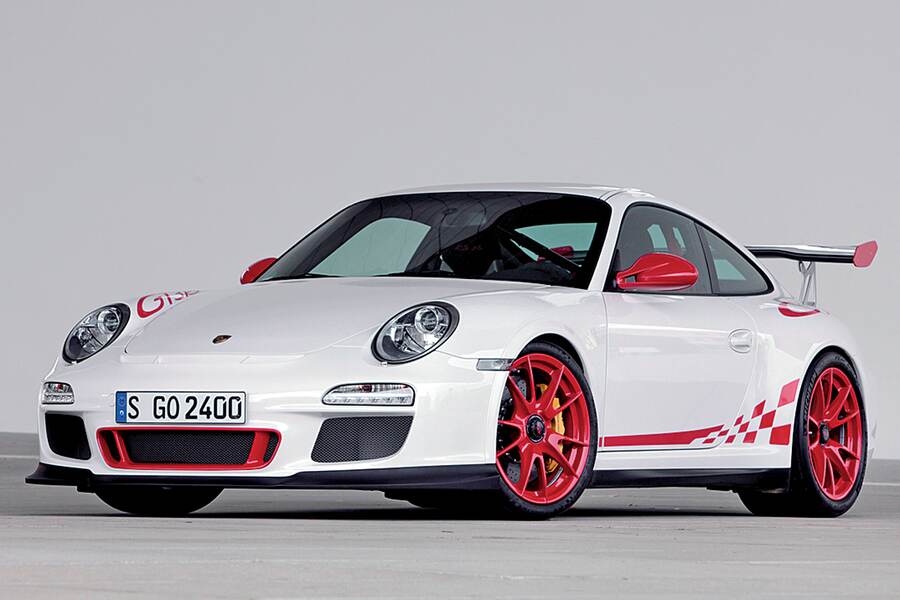 The (already) legendary GT3 RS 4.0 of 2011 was the ultimate expression of the Mezger-engined GT-series concept, and Porsche ensured its aerodynamic stability was up to snuff. The RS 4.0 retained the basic 997.2 GT3 RS body, but it gained a pair of carbon-fiber dive planes (also known as canards) in front of the front wheels. The dive planes are mounted at a relatively steep angle of attack and serve to shift the overall aerodynamic downforce balance forward, and at much lower speeds than would a larger front splitter. The dive planes also helped to direct airflow away from the front wheel housings, which slightly offsets their drag penalty.

The 991 GT3 of 2014 was the first GT-series 911 to use an entirely new body shell and chassis. The base 991 already featured numerous aerodynamic improvements over its 997 predecessor (despite its larger frontal area) such as improved/increased underbody paneling and a lower, flatter profile. The 991 GT3 built on this with the typical GT aerodynamic accouterments such as the front splitter and rear spoiler, but Porsche took several additional measures to improve their effectiveness.

The 991 GT3’s front splitter was enlarged and raised on each side to improve downforce, and the edges of the spoiler continue vertically in front of the wheel arches to help deflect airflow from entering the wheel housings. At the rear, the adjustable rear wing and its endplates were redesigned, and the Gurney flap at the trailing edge of the rear engine lid was integrated into the lid itself. 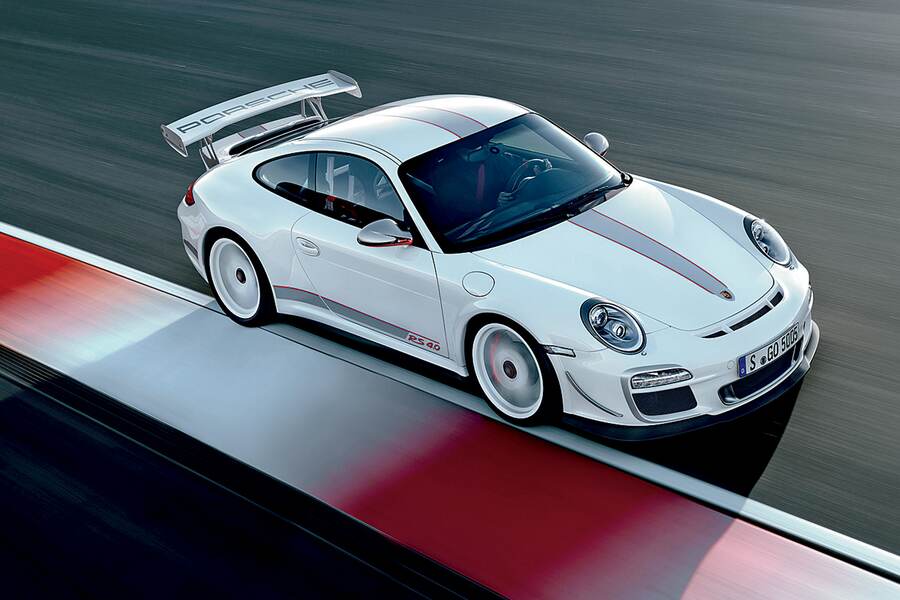 For the first time, Porsche’s aerodynamicists applied a rear diffuser to the 991.1 GT3. A rigid aluminum undertray was installed beneath the engine; its upswept trailing edge aligns with the shape of the rear center muffler and serves to smooth and straighten the airflow underneath the car, which increases downforce. All of these measures meant that the 991.1 GT3’s Cd increased to 0.33 (versus 0.30 for the 991 Carrera S), but the significant downforce and cooling system efficiency gains meant it was a worthwhile compromise.

Porsche’s customary mid-cycle update of the 991 occurred in 2017, with the 991.2 GT3 debuting as a 2018 model. The body was quite similar to its 991.1 predecessor, but with many detail improvements. Close attention was paid to optimizing airflow underneath the car, which increased downforce both front and rear. The rear diffuser was deeper, and large strakes were added to improve its effectiveness. The rear wing was mounted higher and further back, which meant that it worked in cleaner airflow off the rear of the car. All of this meant that the standard 991.2 GT3 generates the same amount of overall downforce as the homologation-special 997.2 GT3 RS!

The 991.1 GT3 RS of 2016 was the first GT-series Porsche to approach the level of aerodynamic downforce of modern race cars. It achieved an impressive 770 lbs of downforce at 186 mph, which meant that notable levels of downforce was also developed at speeds below 100 mph. Besides the usual larger front splitter and rear wing, the single most important aerodynamic feature of the 991 GT3 RS is the prominent extractor vents at each front fender. These served to evacuate the high pressure that builds up in the front wheel housings, and in concert with optimized airflow past the front splitter and through the radiator ducts meant that front downforce was doubled over that of the 997 GT3 RS 4.0, with a minimal increase in drag. 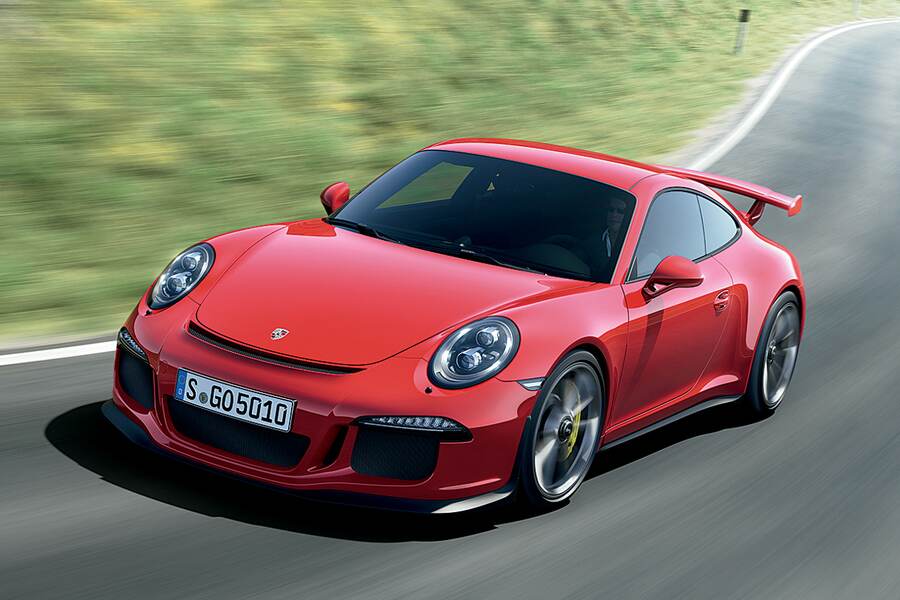 The 991.1 GT3 RS was the first GT-series car to be based on the widest Turbo body shell and had wider front and rear tracks (with 265 mm tires in front!), which makes its minimal increase in Cd over the standard 991.1 GT3 even more remarkable.

Porsche’s latest and greatest 991.2 GT3 RS has made a big splash in the automotive world with its astounding Nürburgring lap time of 6:56.4, which is exceptional for a car with “merely” 520 hp. The same basic aerodynamic package of its predecessor was used, with some key improvements. Unlike all previous GT3s which used air exiting the side radiators for front brake cooling, the 991.2 GT3 RS uses dedicated NACA ducts on the front lid (as derived from the current GT2 RS track-day special). This allows all of the airflow through the front wheel housings to be efficiently evacuated out of even larger extractor vents in the front fenders. Subtle contours in the front lip spoiler/splitter promote laminar airflow around the front bumper; the sum of the front end aero aids of the latest GT3 RS obviate the need for dive planes as in the 997 GT3 RS 4.0, which reduces drag (Cd remains at 0.33).

At its nominal rear wing setting, the latest GT3 RS produces the same overall downforce figure as the 991.1 GT3 RS (770 lbs at 186 mph). Manually adjusting the rear wing’s angle of attack increases this figure to 992 lbs! However, to achieve balanced aerodynamic forces front to rear, a complementary adjustment needs to be made at the front, and this is done in a crudely simple yet effective manner. As introduced in the 981-gen Cayman GT4, a small panel is removed from the leading portion of both of the inner front wheel housings. This increases the throughput of air over the front lip spoiler and through the wheel housings, which increases front downforce. 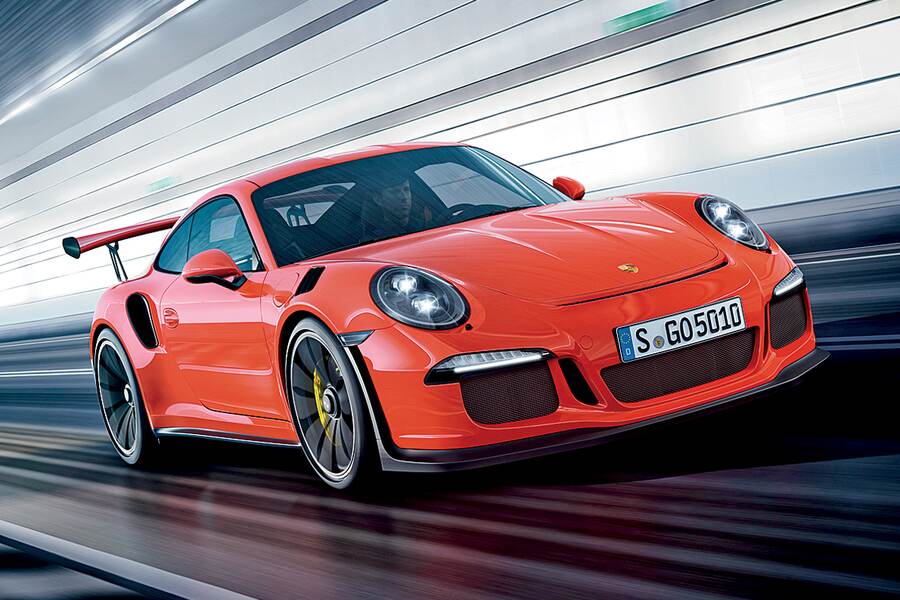 Porsche’s GT-series street cars have seen a marked improvement in aerodynamic efficiency thanks to continual development in wind tunnel, computational fluid dynamic (CFD), and racing environments. Though Porsche was somewhat of a pioneer in active aerodynamics (the 964’s speed-dependent extendable rear spoiler), the GT cars have stuck with relatively low-tech, manual adjustments thanks to strict homologation rules of the series in which the racing versions compete. In light of recent high-performance street machines with advanced active aerodynamic features such as continuously adjustable spoilers (Lamborghini Huracan Performante, various McLaren models), it will be interesting to see if Porsche follows suit with future super sports cars. 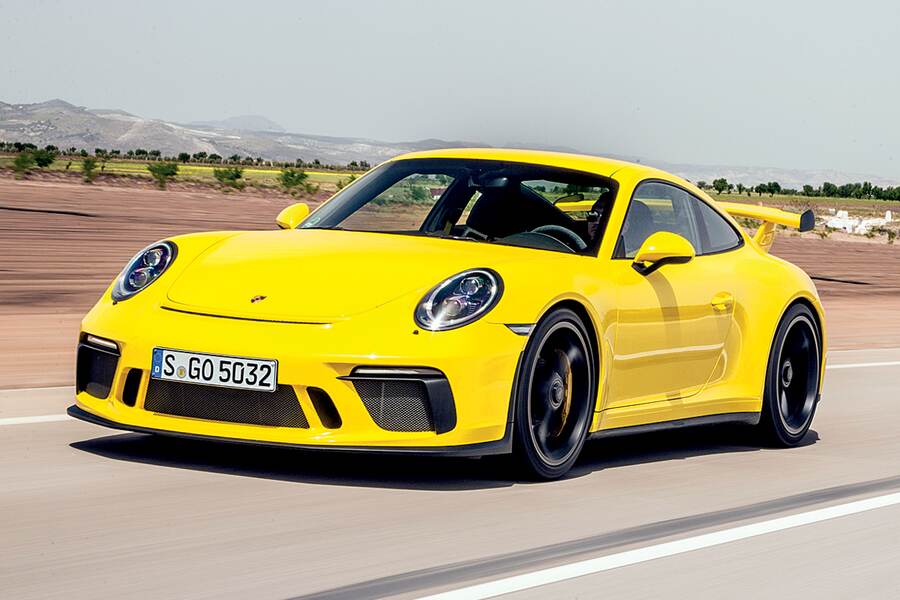 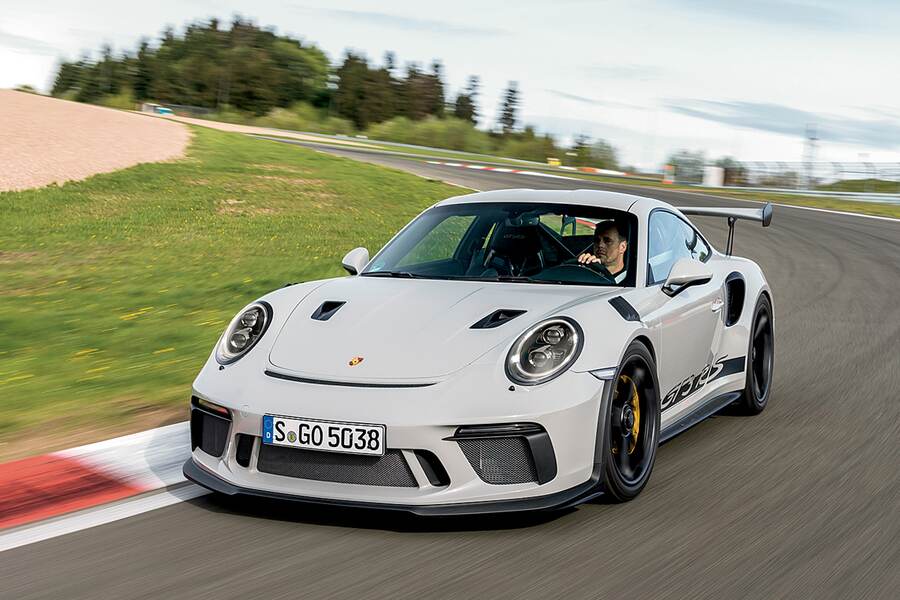 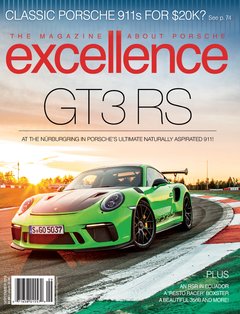