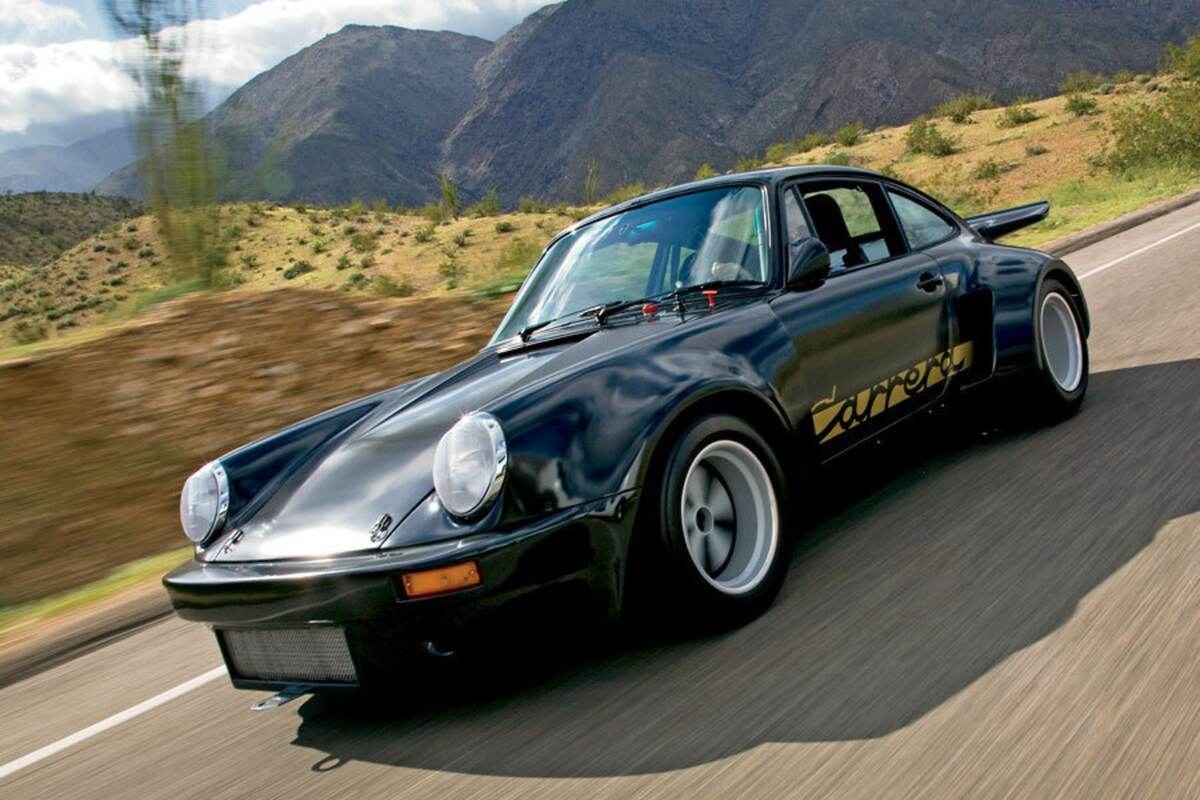 This driver’s seat was made to fit someone else. A lanky, six-foot six someone else, to be exact. It’s narrow and bolted to the floor, so it’s a very long reach to the controls. With two pillows behind my back, the small suede steering wheel and “tall-man” shifter finally fall comfortably to hand.

Twisting the ignition key shatters the still Southern California desert air. Gingerly engaging the racing clutch, the black 911 coupe leaps forward as if tugging at its leash. With a “breathed-on” 3.6 out back, there’s no lack of urgency. The short gears aren’t hurting, either. The monster-sized tires promise big grip, but I’m reminded of some simple advice: Discretion is advised whenever you put this much torque to the ground in a chassis this light.

I tense slightly, but hammer the flat pedal home anyway. The interior noise is deafening, a howl that crescendos and reverberates in rhythmic waves. The stench of perspiration mixed with race gas fills my nostrils, an acrid odor only a race car can provide. As the scenery blurs, the road’s every nuance is telegraphed directly to my hands, feet, and rear end. 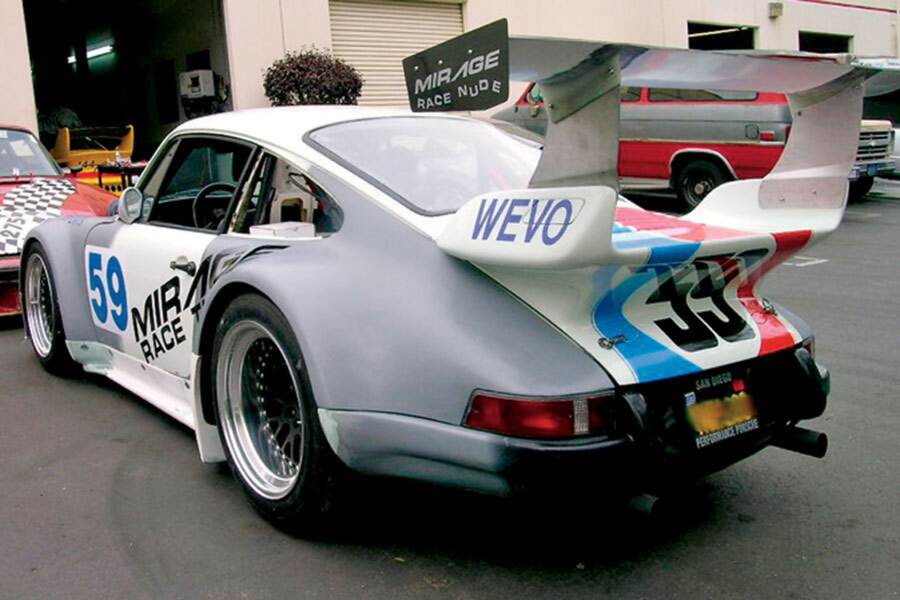 This car has all the subtleties of a hyena. It screams. It bays. Throttle response is instantaneous, braking stupefying, and turn-in brisk. So direct is the connection to everything happening beneath and in front of me that I’m soon driving harder than I expected I would.

It’s a good thing this 911 corners like it’s on rails because we are taking up the entire canyon lane with just a few inches to spare on either side. The balloon-like Avon race tires on all four corners create a Sasquatch-sized footprint, but they also yield a supple ride. Did I mention they’re insanely grippy, too? Any attempt to break the rear tires loose is met with utter futility. Again and again I try to elicit oversteer. No dice. No matter how hard I try, this 911 will not surprise me — even if my senses tell me I should be concerned. So I settle in for the long road ahead, relishing in the visceral experience provided by Mike Gagen’s ever-changing early 911.

When Gagen bought this 911 in 2002, it was a 1969 T that had been converted to look like an RS 2.7 by Alain Jamar, longtime Porsche Owners Club magazine editor and GT1-class racer. Gagen, of San Diego, recalls: “It was a dual-purpose car with a thousand miles on it after a total restoration with new pans and paint. A 3.2 had been installed along with a close-ratio 915, Turbo brakes, and 16×7s & 9s.” 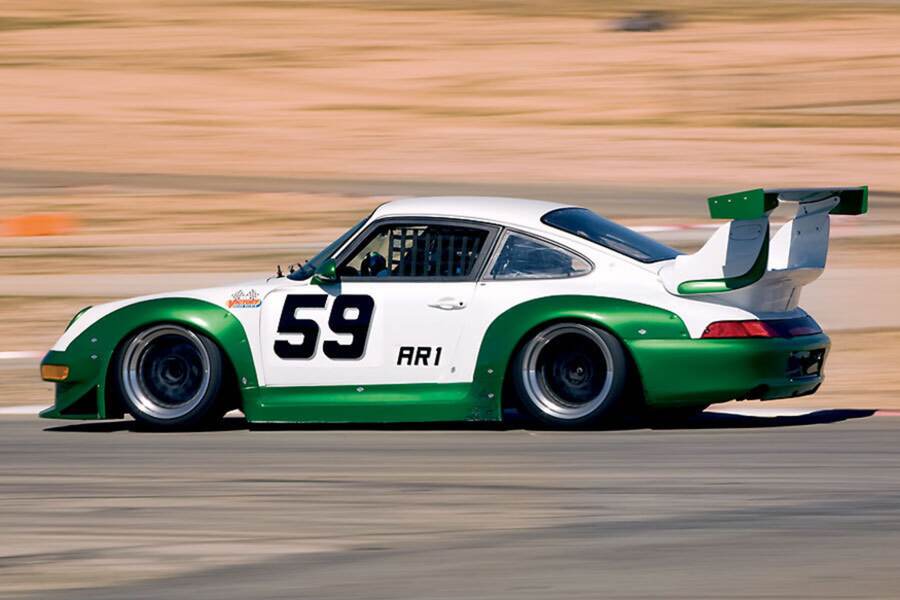 He recalls the 911T was “too nice to track.” But that didn’t stop him from enrolling in the Porsche Club of America San Diego Region’s autocross program. After three years of autocross, driver education, and time-trialing, it was time. Gagen asked Jae Lee at Mirage International in San Diego to install custom-valved Bilsteins and adjustable anti-roll bars. An aero package, Helix Motorsports six-point roll cage, and other racing bits were put in soon after. It wasn’t long before Gagen had his PCA club racing license.

Entrance into the GT3 class led to a second incarnation of the once-humble white 1969 T. That’s when Gagen made the big decision to re-body the car as a longhood RSR. On went 935 mirrors, a plastic rear window, and a bigger wing. New front and rear bumpers, along with running boards, were one-off prototype pieces, and the flares were custom shaped to accommodate 18×11 and 18×13 wheels.

Fortunately for Gagen, his wife Yvonne showed her support early on by accompanying him to the races and giving input on aesthetic decisions. One problem they discovered early on was that making molds to replicate the custom body parts would be expensive, and if Mike went off course before that happened, rebuilding the one-of-a-kind panels would be just as costly. Another consideration was the rear flares, which were heavy and contoured for 27-inch tall tires. Gagen had decided to return to a 25.5-inch race slick, so these would need to be reshaped again. That was the last straw, and his “RSR+” concept was abandoned after just one year to make way for 993-style bodywork. 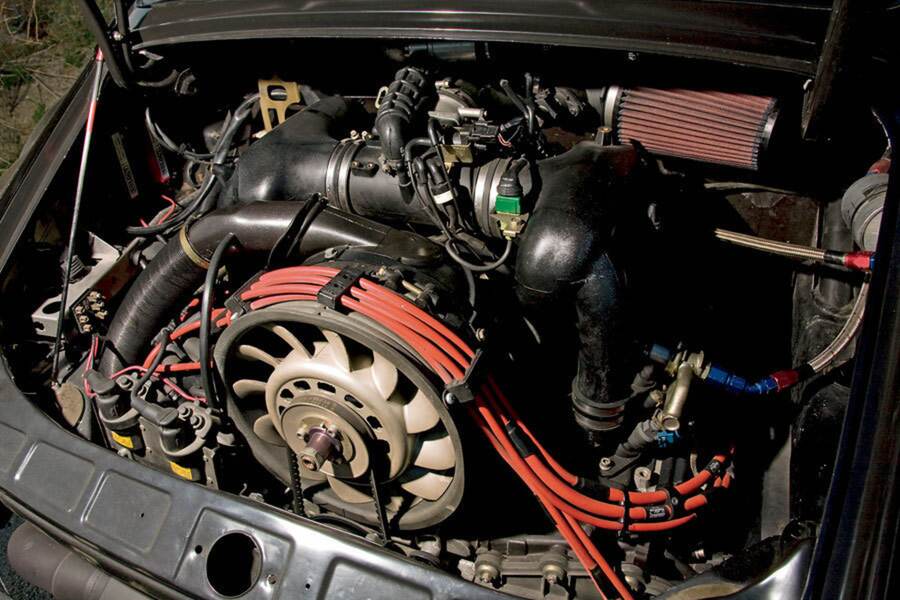 Wanting more performance than the 3.2 could give, Gagen decided it was time for an engine upgrade, too. After locating a 1995 993 engine, he asked an old VW hot rod buddy named Victor Ofner rebuild it. Now retired, Ofner worked in Porsche’s race shops building 962 motors after completing his mechanic’s training in Germany. He would later become crew chief at SoCal’s Alan Johnson Racing.

Built to custom specs, Gagen’s motor is impressive: 3.6 liters with Supercup cams, 964-style cam gears, RSR solid rockers, and Carrillo rods. Before assembly, the crankcase was boat-tailed and some intake blending was combined with stock-size valves. The piston tops and the valve-face surfaces received heat-barrier treatments, while the piston sides received a Teflon treatment and the valve springs and retainers were cryogenically treated. The motor has two Motronic chips, one for 91 octane and the other for 100. Claimed peak rear wheel horsepower is a hefty 306 at 6600 rpm, and torque is reportedly 264 lb-ft at 5500 rpm using 92-octane fuel.

The 915 gearbox rebuild that accompanied the new motor features five custom gears, including a tall first and short ratios for second through fifth. Gear spacing drops 1000 rpm with each shift at 7000 rpm. The box has many Wevo parts, which includes the extra tall shifter, shift gate, bearing bridle, and 8:31 ring-and-pinion setup. A dedicated transmission oil cooler and filter, 60/40 limited-slip differential, and McKenzie-blueprinted 911 Turbo CV joints were added before the transmission was installed ahead of a lightweight flywheel and Centerforce clutch. 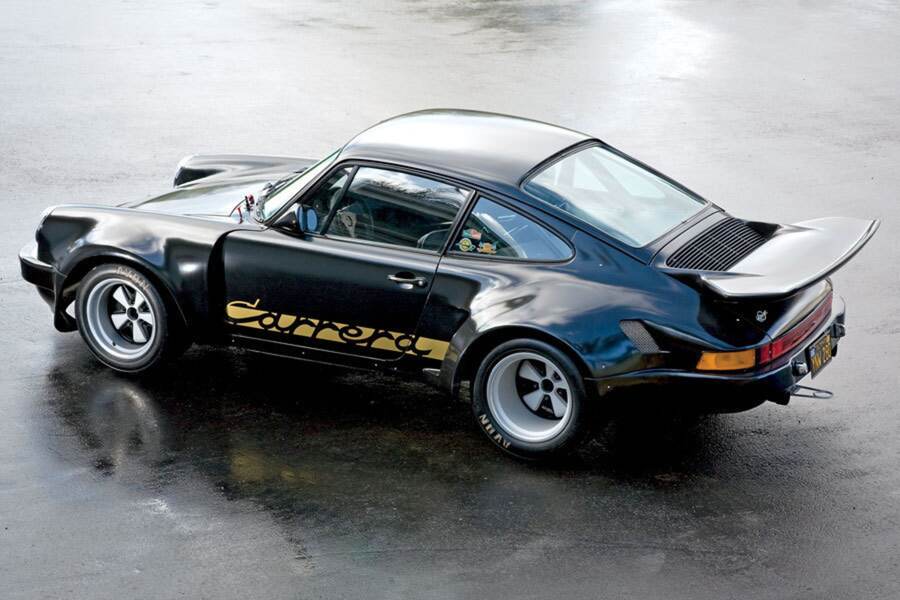 By 2005, the time had finally come for version three. Starting in 2003, Mike’s 911 had undergone many changes, including a move back to taller tire sidewalls. Attendant suspension surgery included new spring-plate bungs welded in and triangulated two inches above the torsion-bar tube. Along with adjustable control-arm mounts, this change allowed for proper geometry with a lowered ride height and huge tires.

“With a 27.2-inch diameter slick, you lose suspension geometry,” says Gagen. “So raising the pivots permitted us to have tall rear slicks and a very low ride height.” At this point, the 911 had ERP 935-style front and rear spherical-bushed coil-overs, Smart Racing Products anti-roll bars and JRZ front and rear shocks, all of which were dialed in at Willow Springs Raceway. The old roll cage was tossed in favor of a custom full cage from Auto Power, which was attached at the revised suspension pick-up points and the tubular rear sub-frame using 2×3×12-inch sleeves.

The interior had not escaped Gagen’s attention. Kirkey race seats were installed along with a cool suit/helmet blower that’s located between the passenger’s feet. The Motronic engine-management brain, Optima dry-cell battery, and air jacks were mounted in the back of the interior, under aluminum paneling designed by Jim Copp. There’s more than a little “race car” left in this 911’s cabin. Peering in, Gagen says “See the primer paint under the steering coupler? I had the firewall roof raised two inches above the gas pedal for my size-14 Simpson racing shoe.” 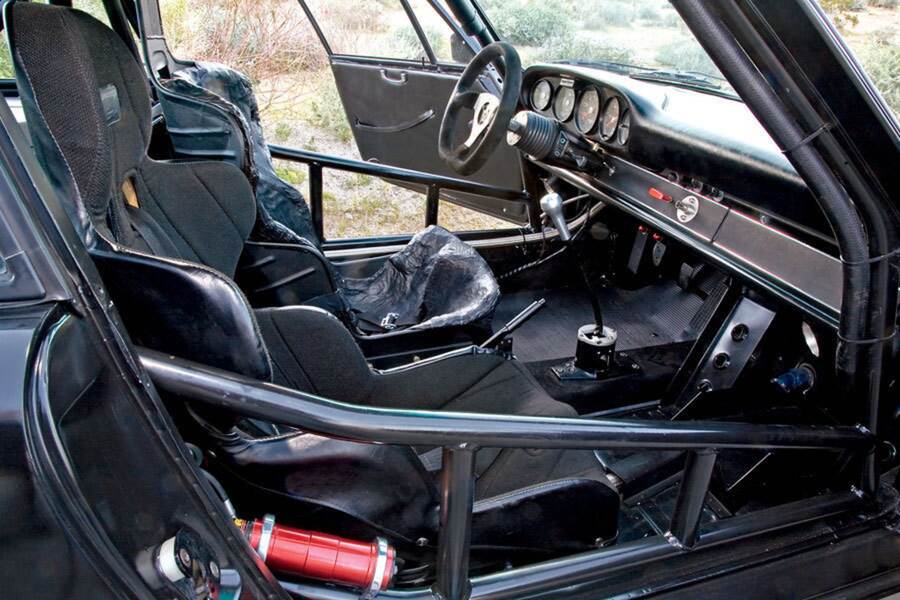 For the exterior, 993 EVO2 fiberglass panels were ordered from AIR in Van Nuys. Gagen felt that the lightweight body would offer better aero and save 200 pounds or so. He modified the forward tub to work with the EVO2 nose and oil-cooler ducting. The forward air jack went in next, and the tub was then modified to work with the Dzus-fastened fiberglass fenders. After the six-foot-wide, high-aspect elevated wing was test-fit, Mark Tyler of Qualtech Autobody in San Diego was tasked with painting the car in a contrasting white and green scheme. All told, the finished car weighed 2,310 pounds, including driver.

“It wasn’t ‘vintage’ anymore,” comments Gagen. “But on a high-speed track, when compared to a 1970s wide-body, it was worth a couple of car-lengths each lap.”

Over the last five years, Gagen has become known as a formidable competitor in Southern California club racing. In PCA time trials, he took Top Time of Day on two separate occasions at the Streets of Willow, along with several firsts in class. Content with his accomplishments, he was ready to dial back his on-track involvement and was thinking about returning his 911 to its dual-purpose street/track roots when he took part in 2009’s Targa California for pre-1976 sports cars. It sealed his decision. 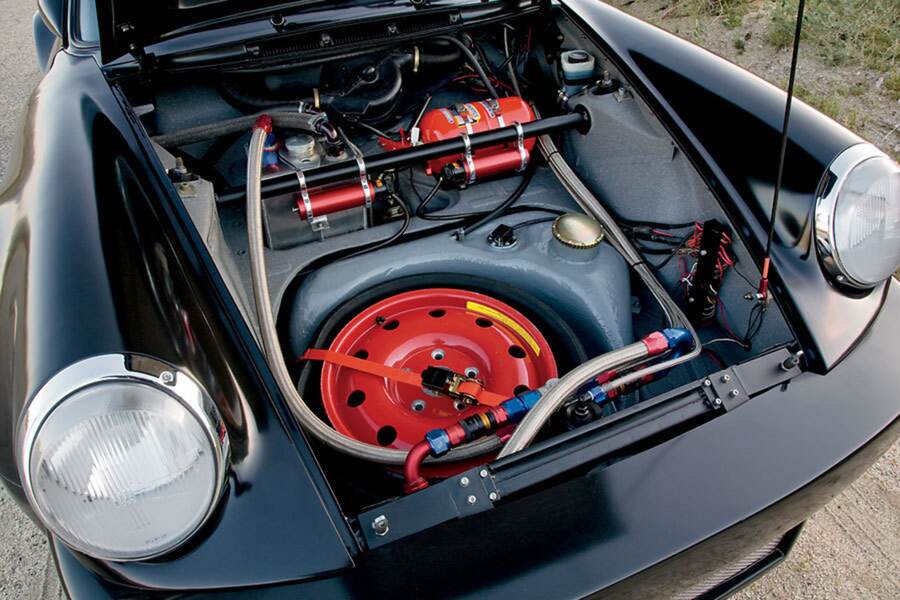 He would remove the 993 EVO2 body, put it on the shelf, and adapt a ’74 RSR-look shell. This earlier-era body would end up being modified to provide room for the widest 15-inch wheels and tires RSR 3.0s ran. A left-foot braker, Gagen loves having a big footprint up front — which allows him to transfer weight there without locking up the front tires. At the limit, Gagen says his 911 is set up for a bit of oversteer, which he likes because it allows him to stay on the gas while rotating into a corner.

He started with AIR 15-inch fiberglass fenders and had Qualtech modify them to fit 15×11 and 15×14 hand-grooved Avon bias-ply slicks. Harvey Weidman of Oroville, California spent considerable time building custom, 15-inch Fuchs alloys to accept the tires. A second set of BBS 17×11- and 17×13-inch wheels allow for the use of race slicks on the occasional track day.

The next order of business was softening the suspension. TRE Motorsports of North Hollywood lowered the spring rate to 250 pounds up front and 400 pounds in the rear. The JRZ shocks were also made double-adjustable all the way around to help improve the ride. TRE then installed a new heater/defroster system with Billy Boat headers as well as a custom-welded steering rack, a six-nozzle fire system, and a stock, 17-gallon gas tank modified to work with a 100-mm, under-hood cap. A 996 collapsible spare tire was also installed. To spruce up the interior, TRE installed a pair of RS-style door panels and floor mats. 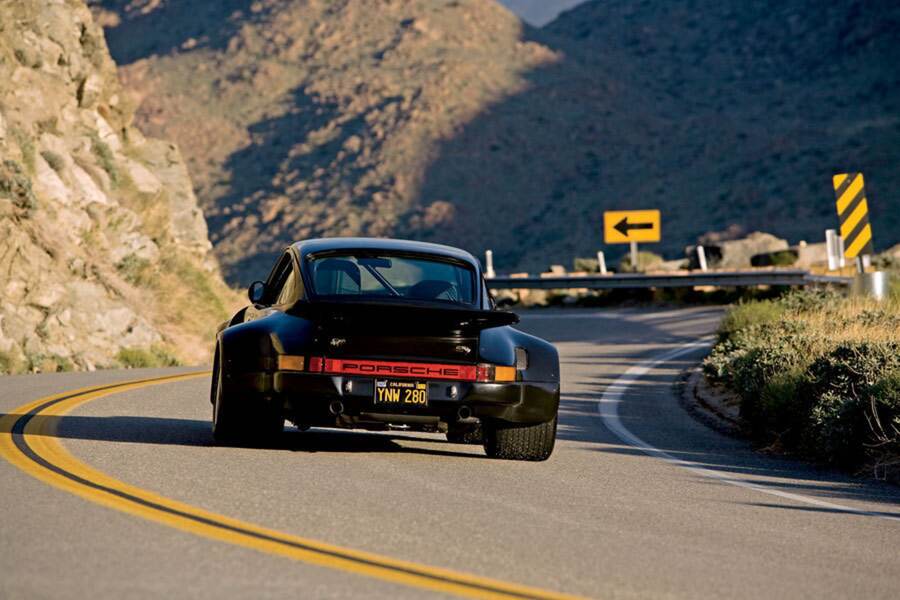 Qualtech of San Diego completed the bodywork and painted the RSR with DP90 epoxy semi-gloss black primer. Gagen liked the look and thought he was done — but the front trunk still needed some attention. He asked Lance Smith Race Rods in Ocean Beach, California to organize it. Smith patched holes, installed grommets, added damper mounts, and painted the compartment speckled gray. A Smart Racing Products oil tank with beautifully plumbed –16 oil lines to the remote oil coolers went in next. To protect the fragile fiberglass fenders, Smith installed quarter-inch neoprene with a fiberglass overlay inside of them. Not quite content, he also redesigned the rear interior paneling for improved access.

So it is that this 911, which started out as a modest carbureted 1969 T, has gone from mild street car to successful club racer and back again. Today, it’s a 1969 911T in little more than VIN plate and gauges. Is Gagen suffering from a similar identity crisis? Judging by the multiple revisions to his 911, you’d be tempted to think so. Then again, he did serve as a rock-steady air traffic controller at the San Diego International Airport for 30 years — so maybe there’s resolute logic and reasoning behind the car?

Gagen seems to think so. “I saw it as evolutionary and remaining continually in flux,” he says. “I suppose I subscribe to the ‘It isn’t finished yet’ philosophy. Heck, I still need to come up with a color to paint it!” 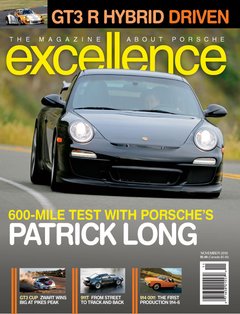 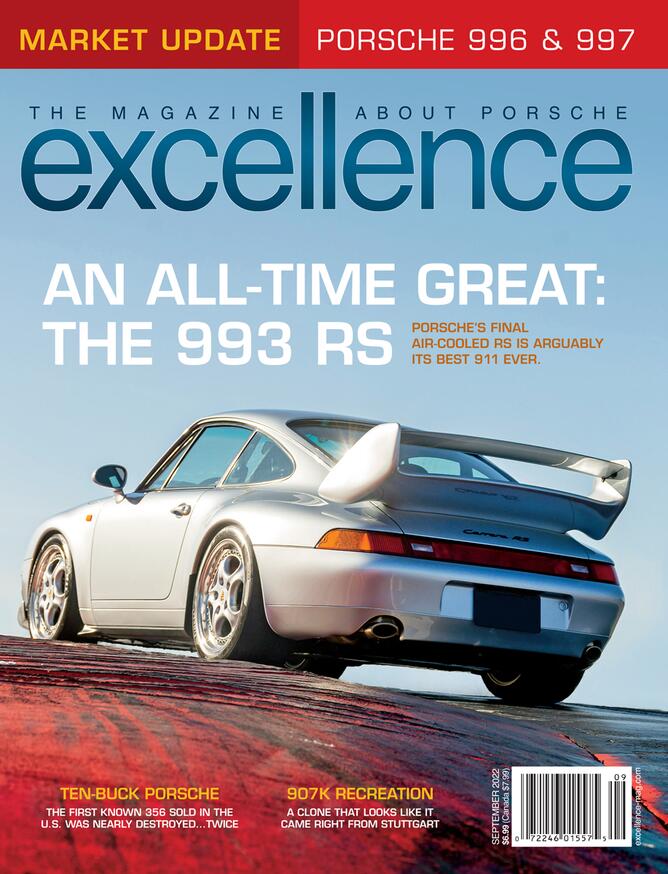