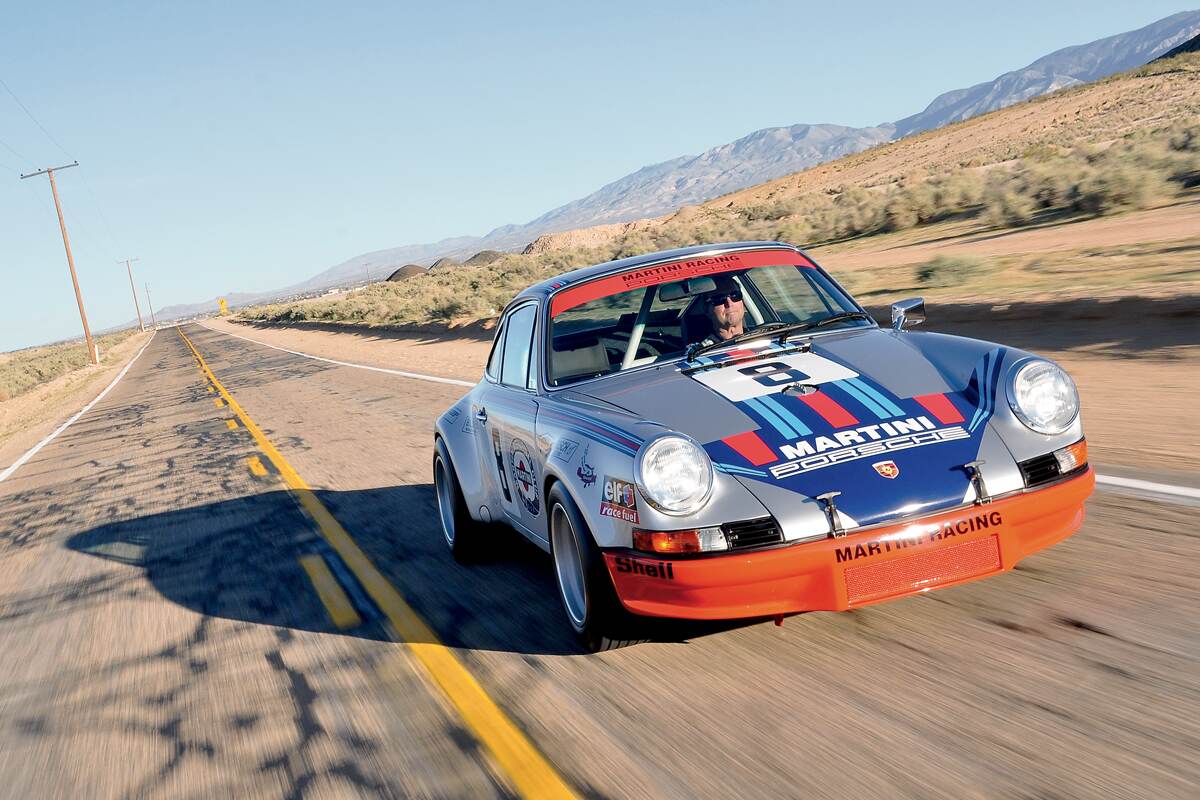 Forty-five year ago, Herbert Müller and Gijs van Lennep raced the Martini-liveried #8 1973 911 RSR to Porsche’s eleventh and final victory in the Targa Florio Italian road race. Five years ago, Southern California-based enthusiast Simo Veharanta traveled to Germany to visit the Porsche Museum in Stuttgart. While lots of historic machines caught his eye, it was the Martini RSR that he fell in love with. Seeing that vintage racer in the flesh evoked the adolescent fantasies of a kid once just learning about Porsches. Shortly after returning to the States, he knew which car he wanted to build next.

Since the 1973 Targa winner is in Porsche’s possession and is not for sale, Veharanta set out to build a tribute (a.k.a. a clone or replica) to the original. But the final result would be more than just an elaborate paint and sticker job. His goal was to recreate a car like the real #8 that had also been updated with components he thought the factory would have used if they were available at the time.

To start, Veharanta, who operates SV Automotive Engineering in Ontario, California, began by sourcing a Euro-spec, non-sunroof 1978 911 3.0 SC. It was completely disassembled, media-blasted to bare metal, and then coated with Glasurit primer. Next came some metal work to relocate the hood latch to accept the long hood and fenders from a 1973 911. Veharanta then flew in a specialist from Finland who TIG welded on the factory 911 Turbo (930) flares.

For the bumpers, Veharanta worked with Getty Design to reshape them to match the flare of the original 930 fenders. The Silver Metallic paint is the correct shade for 1973 911s, and the replicated Martini striping and sponsor logos 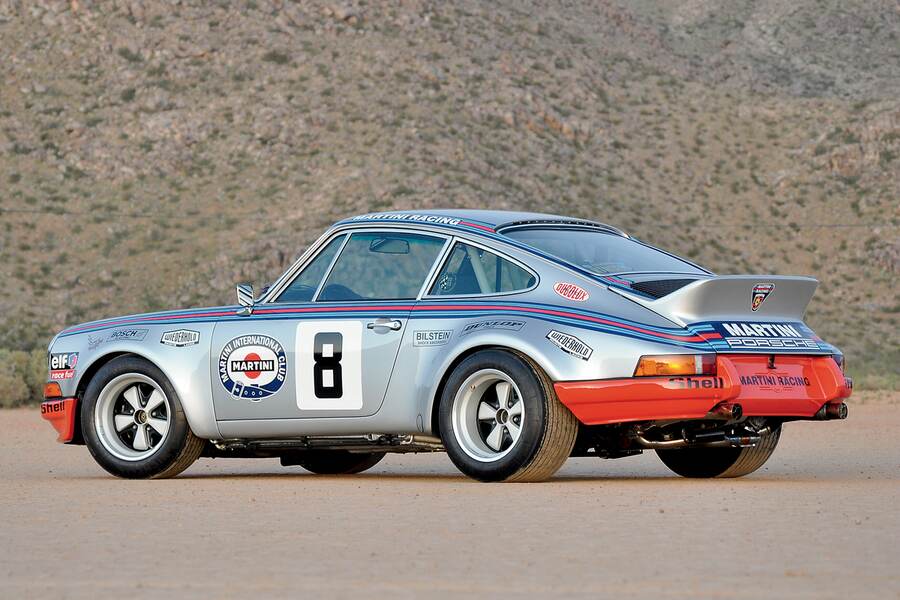 were custom made by Dan Porter of Magnagraphix in Cincinnati, Ohio.

The underpinnings are primarily from a 930, including the torsion tube and rear trailing arms. A few exceptions are the Rebel Racing coilovers that replaced the torsion springs and Rebel Racing’s adjustable rear anti-roll bar. The front anti-roll bar is an original factory adjustable part Veharanta had at his shop. The braking system is also from a 930, with custom cooling ducts in front.

As the project progressed, Veharanta got a visit from a customer, who in turn brought along a friend named Tim Kretzschmar. As he showed the car and talked about his end goal, Veharanta made sure to mention that it was not for sale. In the shop that day were other air-cooled projects in various stages of completion and seeing them brought back memories of the 1984 911 Carrera 3.2 that Kretzschmar used to own. What he also noticed was the amount of thought that Veharanta put into his RSR replica.

At the time, Kretzschmar had been interested in buying a newer GT3 to serve as his canyon carver, one that would help keep the miles off his 2008 997 GT3 RS. But a few days after seeing the RSR project, Kretzschmar started feeling the effects of ‘air-cooled fever,’ with thoughts of the car rarely leaving his mind. 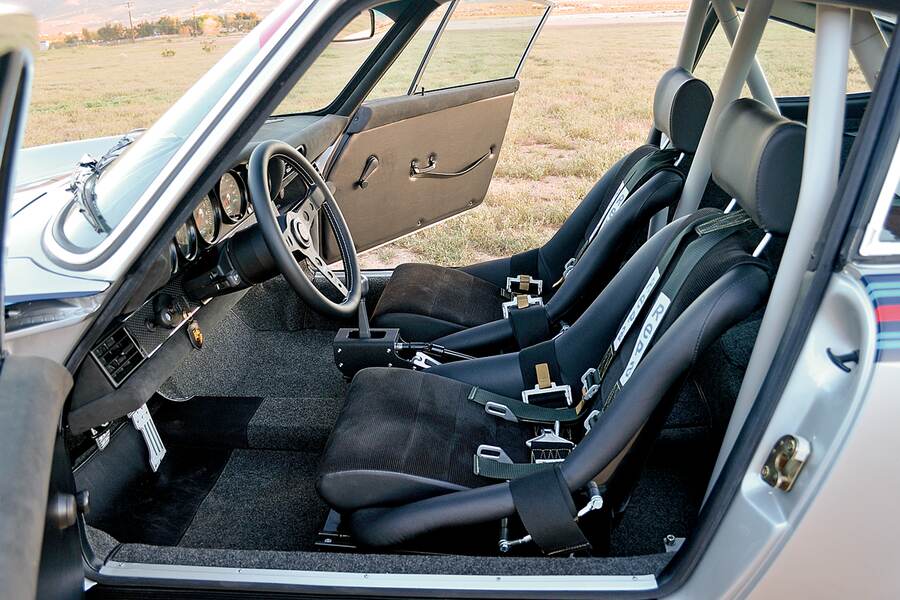 “I told Simo how interested I was and asked if he would consider selling it because I’d love to step in at this early stage of his build and be involved,” recalls Kretzschmar. “His first reaction was, ‘No.’ Although a little disappointed, I understood.” The friend who had introduced the two called a few days after that to say that Simo wanted to speak with him.

As Veharanta tells it: “I told Tim right off the bat that the car is not for sale, it is my car. After a few weeks of talking, Tim made a good offer on the car, and he bought it with the condition he gets to participate in the build by close observation. This turned out to be a fantastic experience. We became good friends and had a lot of fun along the way.”

With the car officially his, Kretzschmar started researching the history of #8, learning about its historical significance, such as its overall victory in the Targa Florio. He also delved deeper into the evolution of the RSR cars that followed. Every detail of the car was discussed between the two, with both agreeing that visually it would be as close to the original as possible, and that outright performance would override comfort or any attempt to tame its wild nature.

They would keep weight down by retaining the wind-up windows and the requisite door release strap and unadorned door panel, and sound deadening would be minimal. The air conditioning controls for the updated A/C system would be placed under the dash to maintain its period-correct look. There is also a six-nozzle fire suppression system that discreetly puts two spray nozzles under the hood, two in the interior, and two in the engine bay. For the gauges, Veharanta had North Hollywood Speedometers replicate the 10,000-rpm tach and 200-mph speedometer of the original RSR and custom make a 10 bar (145 psi) boost gauge. 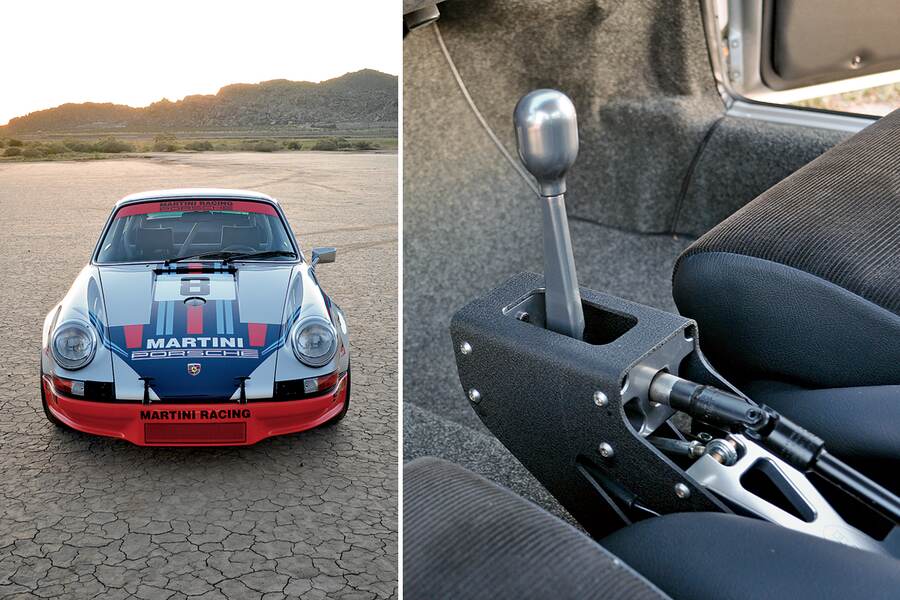 Using a turbocharged engine was Veharanta’s idea from the beginning (the original 1973 RSR had a 280-hp naturally aspirated 2.8-liter flat six) and after Kretzschmar got involved he started a debate of whether or not switch to a naturally aspirated engine. But with time, Kretzschmar began warming up to the idea, especially considering they were going to go all-out for performance.

The 3.3-liter 911 Turbo engine idles steadily as I lock myself into the four-point safety harness with replicated Repa patches. Exhaling through B&B headers and a 3.0-inch exhaust system, the sound is less muffled than stock. There’s some drone, some moan—the kind of sounds that inspire rather than annoy, traveling unfiltered as it tickles the eardrums.

The engine came from a 1988 Euro-spec 930 and it was rebuilt by Fabian Prato of Prato Motorwerks in Walnut, California. It’s mostly stock, save for more aggressive Web cams and a modified Kokeln K27 turbo. Veharanta took the turbocharger to Comp Turbo in Pomona, California, who machined the housing to accept a larger billet impeller for 15 to 20 percent more airflow. The wastegate also has a stiffer spring to work with the modified turbo. The intercooler was designed and built in-house.

The transmission, a G50 five-speed from a 1989 911 (964) Carrera 4, features a shortened case by Patrick Motorsports, and it was also rebuilt at Prato Motorwerks, with the original ratios retained. Before installing a Hargett shifter, the shift linkage was disassembled and rebuilt to include an anti-vibration insulator. Located further back and higher up than stock, getting into first, third and fifth gears don’t require the same reach as the stock position. The feel of the shift action is precise, short, with just the right amount of weight and resistance. 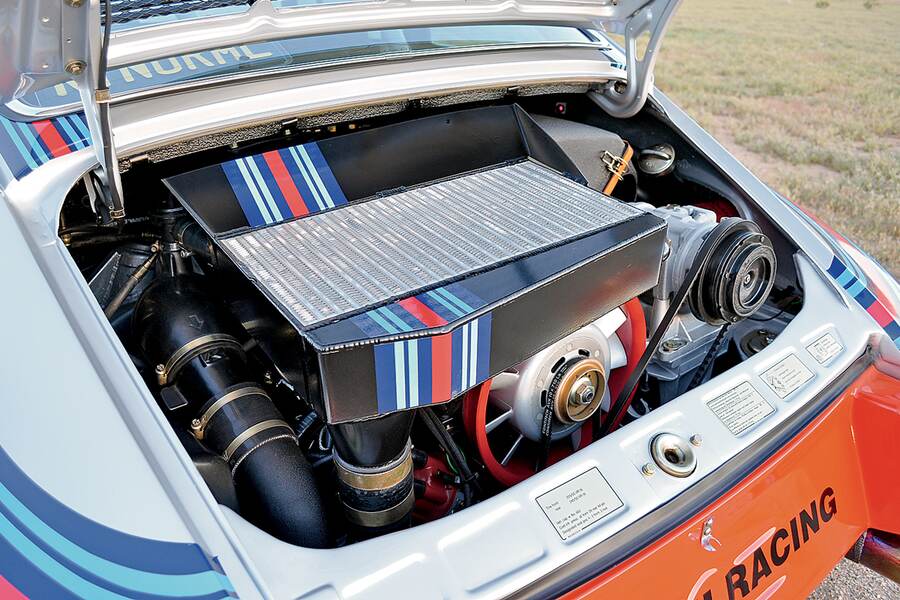 Despite its notoriety for being relatively lifeless before the turbo boost comes on, the 3.3-liter engine pulls with enough verve in the lower rev range to make it easy to drive in traffic. You can feel and hear the boost start to build around 2,700 rpm, the forces of torque pushing you further into the padded corduroy bucket seat. With every lift of the throttle comes the familiar hiss, whoosh and heavy breathing of a turbo, wastegate, and intercooler working in concert along with the metallic gargling of the exhaust system.

The test route I’m on is a two-lane state highway up in the high desert that’s in the late stages of its lifespan. The surface has become wavy and undulating due to years of intense desert heat and a sub-surface that no longer wants to stay still. This, in turn, presents a challenge to the wide Michelin TB15 tires and the rebuilt Fuchs alloys made by Weidman’s Wheels, which are the same dimensions as the ones found on the original RSR, 15 × 9 in front and 15 × 11 in back.

The infamous 911 bump steer causes the MOMO Prototipo to writhe with each change in camber and you could feel the Michelin’s sidewalls flex to maintain contact. Maintaining a line requires constant counter-steering and corrections. Whether one considers this a nuisance or a higher level of driver involvement, the car feels alive and keeps you on your toes!

Adding more power to the equation intensifies the experience exponentially. Not only do I have to fight the bump steer to keep it in a straight line, but equal time is spent keeping a tach needle intent on touching the redline from straying past 6,000 rpm. It being a relatively fresh engine, I stay away from the 7,000 rpm limit Veharanta had set. The power builds in a direct, linear fashion, instead of the rounded mid-range bubble on some turbo engines. Nor does it ever feel like it is running out of breath in the latter third of the rev range, where the larger turbo impeller has its greatest impact. 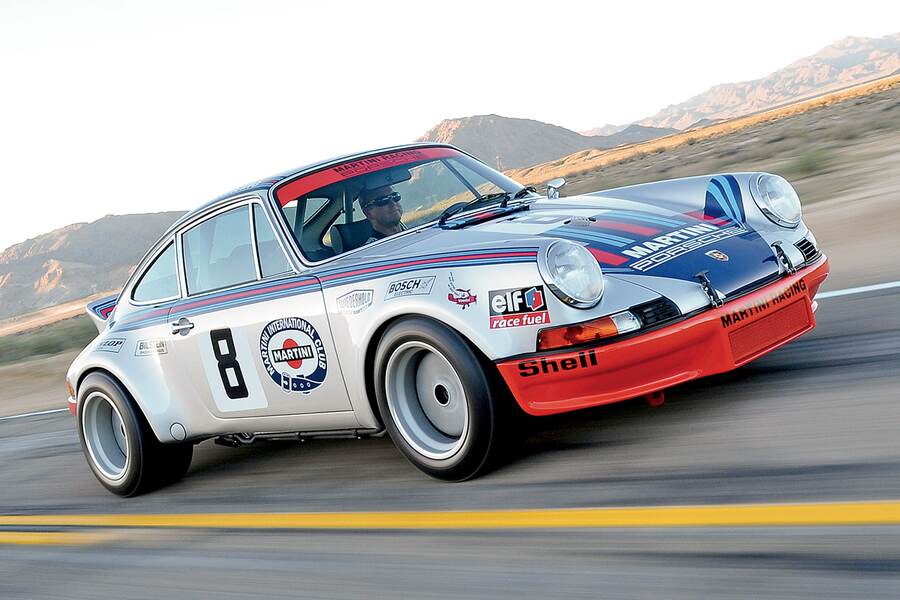 It is hard to put an exact number on just how much power the engine produces because it has just passed its break-in period and had not been measured on a dyno. Given that a stock, Euro-spec 3.3 turbo is rated at 280 hp and this engine features a larger turbo, a more efficient intercooler, a freer-flowing exhaust system but similar peak boost at 15.95 psi (1.1 bar), the safe estimate would be somewhere in the mid-300 hp range.

What it feels like, though, is total mayhem, and mayhem is even harder to put a number on. How does one quantify the feeling of being in fear for your life?! This tribute to the #8 Targa Florio RSR is one of those cars you get out of just happy to have survived. Before driving the car, I had read about rodeo bulls that were so vicious and nasty they had to be retired from the circuit. When I got out of it, I told Veharanta and Kretzschmar that this was one of those bulls.

To be fair, on the smoother roads the car is perfectly composed, with just the occasional wiggle when the suspension and sidewalls compressed under heavy throttle. The steering is nicely weighted and pin-point precise. The wide Michelins and coilovers took to the corners and sweepers on that high desert highway by turning in quickly, taking a firm set through the corner and giving the confidence to test the rear tires’ traction limits on the way out. Kretzschmar, who has since put over 3,000 miles on it, also praised the steering and the grip of the Michelins, saying that even with the relatively engine’s daunting power, the rear has yet to step out on him.

While completely different animals, Kretzschmar says his RSR recreation and his 997 GT3 RS complement each other perfectly. Different ends of the spectrum, obviously, but “both ooze performance and both give you that visceral seat of the pants experience,” he says. “But please don’t ask me to pick one over the other.” 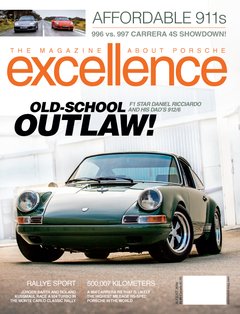