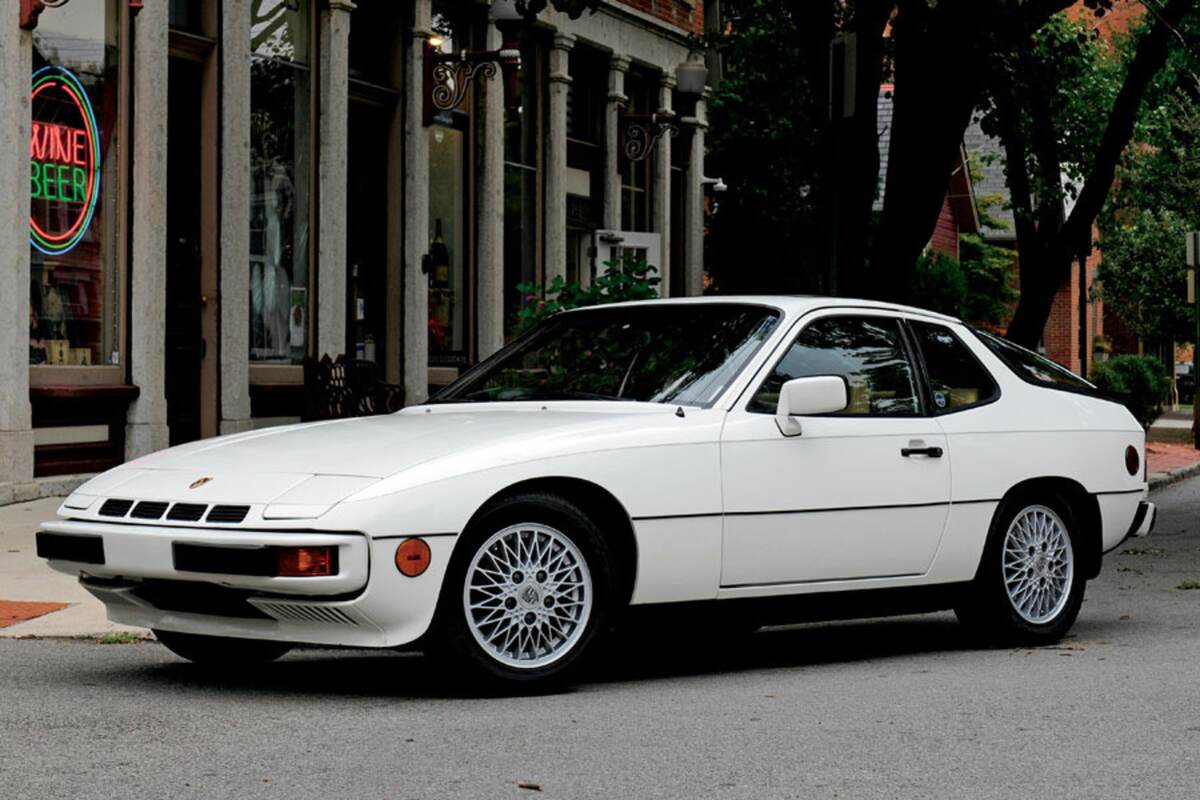 My wife thought I was crazy. She wanted to know what I was going to do with it, a car that shouldn’t be fixed.” Thus begins Tony Griffin’s tale of a nine month odyssey that transformed a 1982 924 Turbo from damaged barn-find to concours entry.

Griffin laughs and continues: “So I told her, ‘Well, I’m going to fix it, I’m going to take it to Porsche Parade, and then I’m going to sell it.’”The Craigslist ad that initially sparked his interest had read, in part: “…I bought the car as a project and never got to it. Lite front end damage. Frame horns pushed a little to the right, but I had a frame shop straighten them…”

Griffin had allotted a thin budget for the project, and the wounded 931’s price was right, so he and his wife loaded the family’s Chevy Astro van and trekked 400 miles from tiny Flora, Indiana to the town of California, Pennsylvania, just south of Pittsburgh. There, a deal was struck for the 30-year-old Porsche with 77,000miles on the odometer. $1,000.

“On the way home, the right rear tire blew on the car,” says Griffin with a chuckle. “The insurance that U-Haul had talked me into (on a tow dolly rental) paid me $875 for damage done to the rear fender. So, I actually started out with a $125 car.” 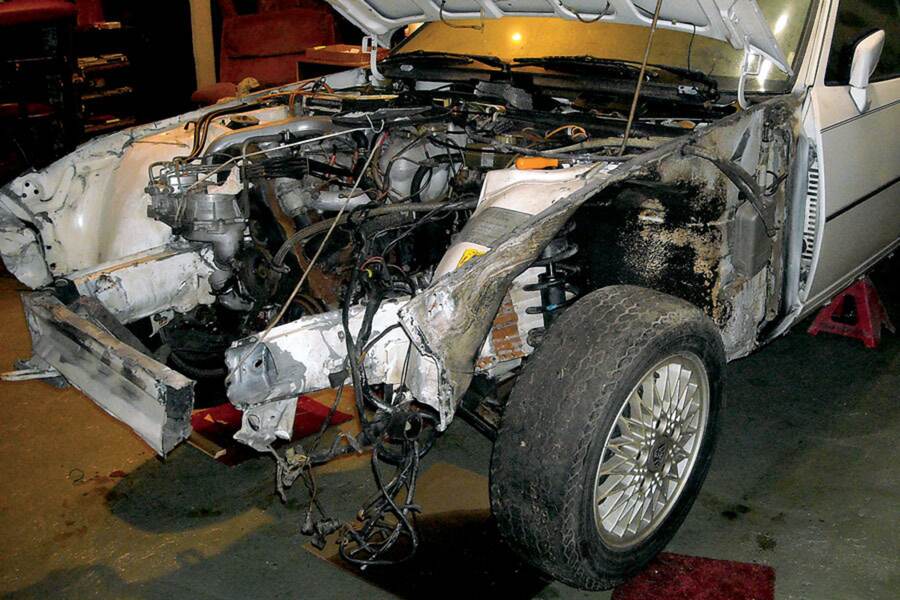 Tony’s business, Griffin’s Service Center, is a small one-man shop “in the middle of nowhere” servicing Porsches, Alfa Romeos, BMWs, Volkswagens…even the occasional Ferrari. Four years ago, after 35 years wrenching mostly for Porsche dealerships and independents,Griffin opened his own shop. “It seems that most of the cars people bring in are ones they want me to preserve; the cars have been sitting in garages for five, six, seven years and the owners have never had the time or maybe the gumption to get them done.”

Thus, this newest project would fit comfortably in his domain. But Griffin’s professional pursuits weren’t the impetus for his desire to take a car to the Porsche Club of America’s annual Porsche Parade.

“I restored a car for my children a year earlier,” he says. “I picked up an ’81 924 for $200. It was not rusty, but it was really rough.”He brought that car back from the dead and wrote an article for the Central Indiana PCA region newsletter about the process of restoring a Scowl Wagon.

“Yeah, that’s what we called these cars back when I worked for the dealership,” he says, noting that the mere presence of a 924 brought scowls to the faces of many at the Porsche store. After finishing that restoration, Griffin was surprised to find he really liked the result. So did his kids, who today share it as a summer driver. Meanwhile,Griffin’s sights shifted toward the next project… 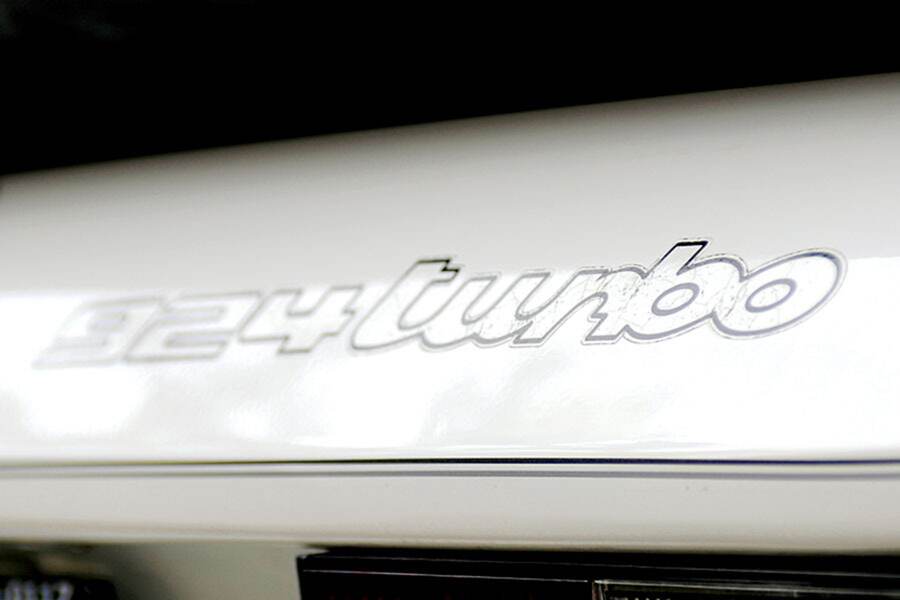 The Griffins arrived back at their Indiana home with their newest Porsche purchase on November 6, 2010, and the project began the following day. The reason for the car’s decade of inactivity was immediately apparent.

“The body man who started working on the car had no idea what he was doing,” says Griffin. “He cut the frame horn open from outside the inner fenderwells and tried to go in and, I assume, pound them out to try to straighten the rails."

Due to the subsequent damage,Griffin felt he had no choice but to remove the front end from the shock towers forward and then weld a donor front clip in its place.He purchased a $350 parts car from Kentucky, and from that he pulled the front fenders, front valance, and the gas tank.He hand-tooled the Turbo’s nose panel back into shape and found its original bumper to be salvageable, as well. Everything else at the front of the car remained original, “…the hood, even the radiator.One of the nice things is that this is still a numbers matching car,”Griffin boasts.

Continuing, he notes “the fuel system was absolutely trashed.”Varnish had to be cleaned from the fuel pump, fuel lines, fuel injectors…“The fuel distributor, I actually took it apart and cleaned every component inside.”The control-pressure regulator was disassembled and cleaned; even the frequency valve was clogged with varnish. 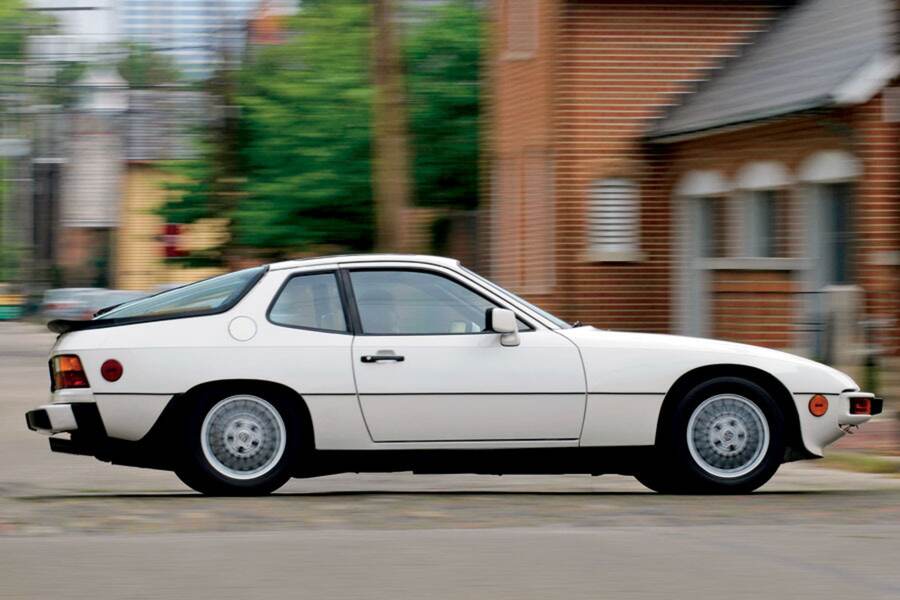 New crankshaft seals and a new timing belt were installed, along with spark plugs and the distributor cap and rotor.“I went ahead and, just because it was 30 years old, put a new head gasket in it, even though I’d never heard the car run,” he adds. Stainless-steel brake lines were installed next.Griffin rebuilt all four brake calipers, installed new brake pads, and repacked the front wheel bearings. He then refinished all four road wheels. Using baking soda with a handheld sandblaster, he blasted the wheels and repainted them in their original color. To them, he mounted a new set of VR-rated tires.

Griffin painted the car from the doors forward. But he says the rest of the car’s paint was cause for concern, too. “I went through countless man-hours trying to scour and clean to the original white,” he explains.After sitting for ten years—with many of those at a body shop—the paint had primers and other paints impregnated into it.He tried standard polishing compounds, but they couldn’t get the white bright enough.

“Then I got to thinking back to when I was a kid,” says Griffin.“ They made this stuff called Westley’s Bleach that was used on whitewalls. I ended up washing the car with Westley’s and literally bleached the white paint.”That finally cleaned it to the point where Griffin could use a polishing compound to bring everything back to a brilliant shine. The original 924 Turbo and Porsche stickers were retained, with their years of patina.

“So the car is pretty much as original as I could get it, with the exception of the paint work and the front fenders,” concludes Griffin about the car’s exterior. 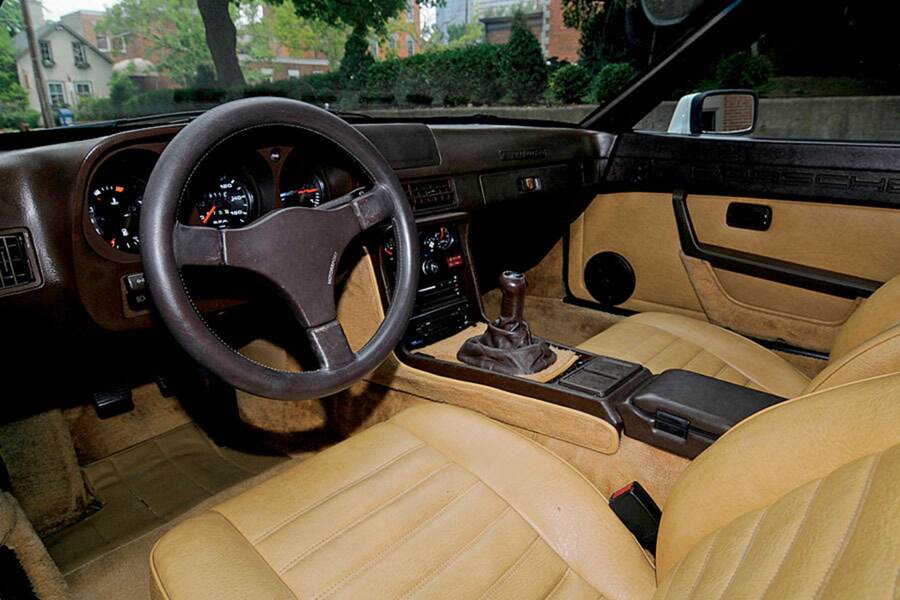 Turning to the interior, Griffin employed more ingenuity in returning the dashboard to reasonable shape. He used a combination of epoxy glue, plastic automotive body filler, and spray-on Rhino truck bed liner (because it’s sandable) to repair the cracked plastic. Then he hand painted and airbrushed it to give it a look of synthetic leather. Smiling, he says, “I made my best attempt, and even though it’s not perfect, from five feet away, you can hardly tell.”

Griffin hesitates to guess at the number of hours spent — or the number of beers consumed—during his six-month process to get the car back in working order, but he knows exactly when his first drive was.“It was on my birthday,May 14. Until that day, every free hour I had in the evenings was spent on the car. I’d get home from work at five or six o’clock, get a beer, go into the shop, work until nine o’clock, go into the house, eat dinner, shower, go to bed. Every night.”

With all but fine-tuning complete, thoughts turned to Porsche Parade 2011, which was scheduled to start in late July in Savannah,Georgia.Griffin had never taken a car to Parade, so when it came time to register, he had no idea how his car should be classified — restoration or preservation. “I read the rules, and they said a preservation car has to be mostly original and have 75-percent original paint.”

That seemed to best fit Griffin’s work on the 931; the restoration class, by way of comparison, called for cars that had been“…rebuilt, repainted, reupholstered, recarpeted, trim replated, etc. in a comprehensive manner.” Despite at least one suggestion that the front-end metal work might tip Griffin’s work toward restoration, he stuck to his initial thought process. 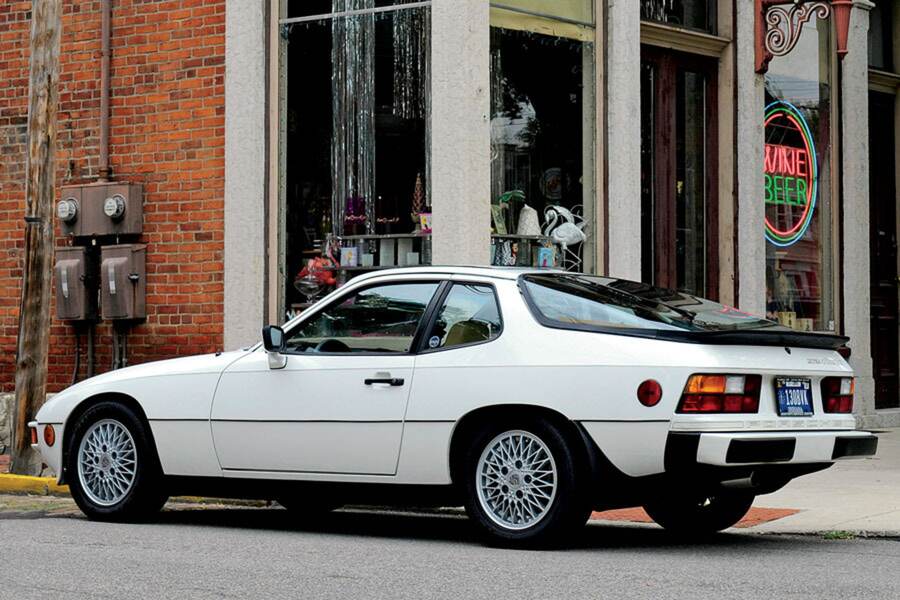 From Griffin’s standpoint, that turned out to be a good decision. Few people have the stomach to fully restore a 924 or a 944, so it came as no real surprise that the restoration group for those models had no entries. “At least in the preservation group, I had plenty of competition,” he gamely offers.“There were some really nice cars there — every bit as good as mine, and better.”

The strength of that competition, though,meant that Griffin’s initial goal of a third-place finish was not met. Judging demerits were given for utilization (Griffin had only owned the car for nine months
and 1,500 miles prior to Parade), a couple of small door dents that would have been difficult to repair without repainting, loose seat belts, brush marks on the dash, bleached carpeting, excess suspension road debris, and incorrect under-hood foam. He was also dinged for a non-original steering wheel, radio, and battery. To Griffin’s credit, the judges couldn’t initially locate the welds from his front-end repair. He’s plenty proud about that.

Given that 2011 was his first time at Parade, and coupled with the fact that his total cash outlay to bring the 924 Turbo to its current condition amounted to approximately $3,200 (including the original purchase price), Griffin is rightly pleased with the result.

“All in all, it was a good experience,”he says. “I learned a lot, enough that I’m going back to try again.” It will be with a different 924 next time, though, as this particular Porsche has already been sold. Some might think it a bit peculiar that he would be so quick to part with something he poured so many hours (not to mention, beers) into during such a concentrated time period, but Griffin strikes us as more of a “journey” than a “destination” kind of guy, and we really like that.

Besides, he admits to maybe keeping his next 931 a bit longer. “Yeah, I just bought another Scowl Wagon—a red ’82 Turbo, number 633 (of 876),”he says.“It’s even nicer than the white car. It’s been sitting almost as long. I intend to take it to the 2013 Parade.” And with well over a year to prepare it, we won’t be surprised if the competition has their hands full in Traverse City, Michigan. 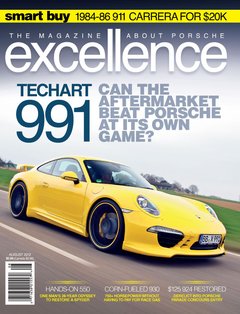