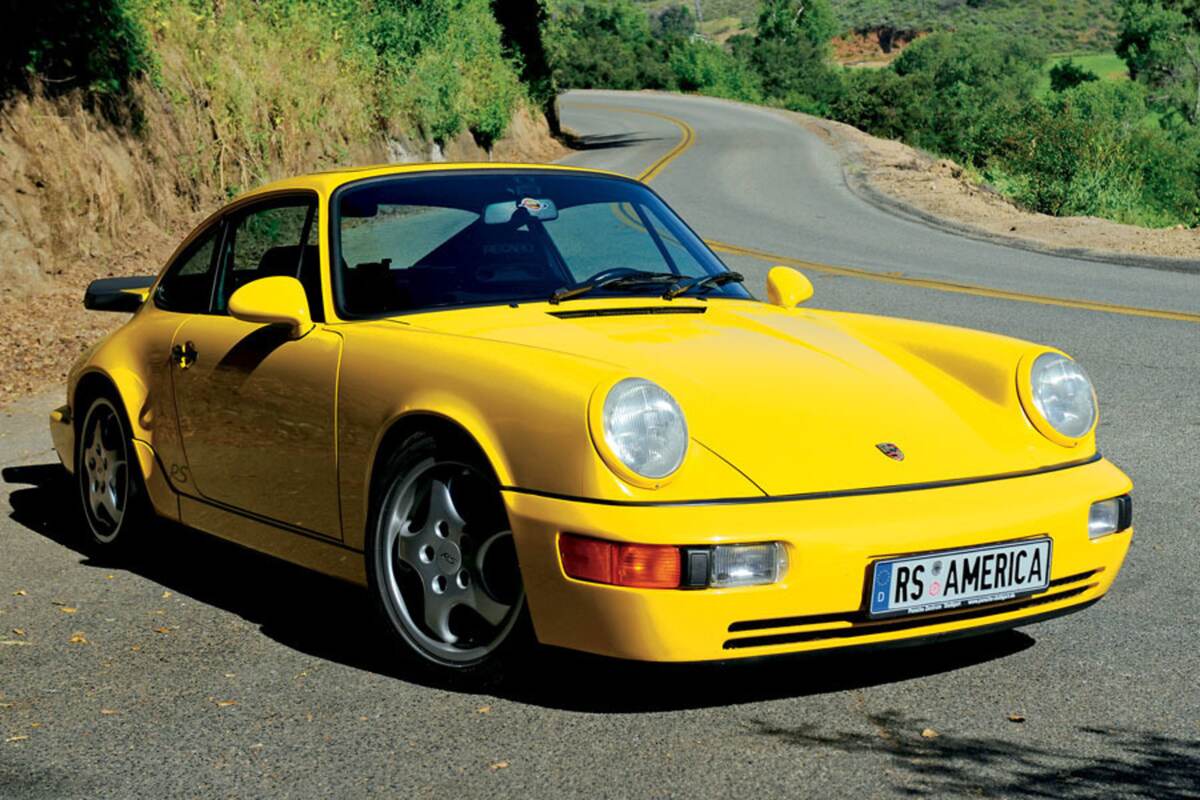 At the 1992 Porsche Club of America Parade in San Diego, Fred Schwab — head of Porsche Cars North America at the time — said of this car, “If you like to autocross, this is your car. If you are a time-trialer, you need this car. If driving is for fun, this is your car…”

Who am I to argue? I point the headlights away from the Pacific Ocean and start up Latigo Canyon. Los Angeles traffic delayed our start by over an hour and, in dwindling light, there isn’t time to bag any photographs tonight. But there’s still enough dusk illumination for one run up the snaking canyon road in a Fly Yellow 1993 RS America.

I’m getting accustomed to the controls, the rhythm of the road, and the give-and-take of the Porsche’s suspension on un­even pavement when a gentle admonition comes my way from the passenger seat, “May I make a small suggestion?” It’s a rhetorical question, as there is insufficient time left for response. “The car will be happier in second gear rather than third here.”

I’m not sure whether the suggestion is for the benefit of the car’s happiness or mine, but owner Keith Verlaque is right. Second gear keeps the revs north of 4000 rpm, the point at which this 3.6 hits its sweet spot. And what a sweet spot it is! 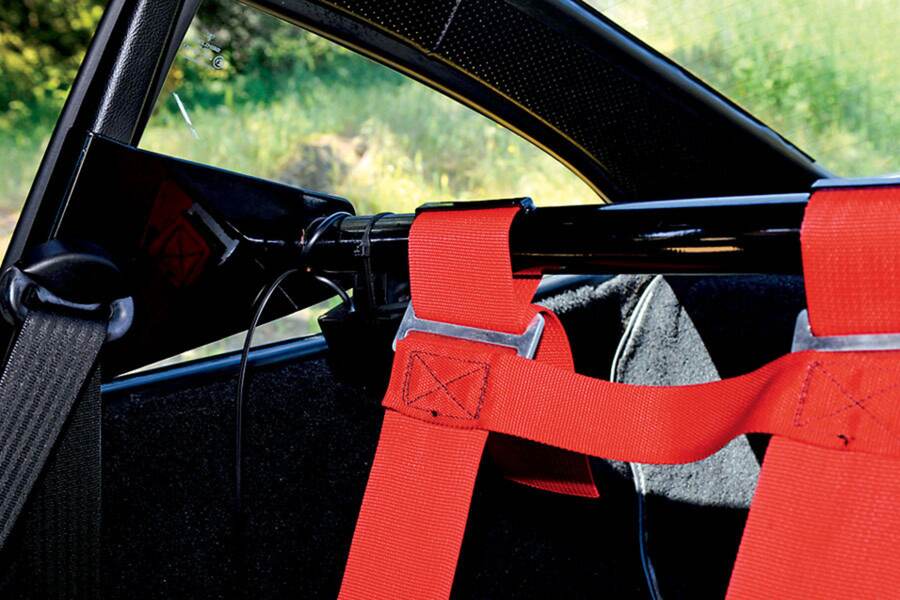 Among Porsche’s non-GT 3.6 variants, has there ever been one with more scintillating power delivery than the original? I think not. As the big “4” on the tach is reached, there is a forward lurch — almost turbo-like in voracity — and it doesn’t relent until the “6” is eclipsed. Having owned one of these cars, one with mild performance modifications, I wonder aloud whether this powerplant is making more than the advertised 250 hp.

“I can show you the dyno sheet. It’s 249 at the rear wheels,” claims Verlaque, crediting custom exhaust work and a freer-breathing K&N air filter. The “unplugged” exhaust system contributes to an aggressive growl that Verlaque likens to a flange effect on a midi synthesizer. And he’s right: The increasingly raspy note seems to turn inside out when the power rushes on at 4000 rpm.

The front suspension is light and lithe without being darty or vague; it transitions and sets quickly, staying nicely un­derneath me. With this street setup, Ver­laque has dialed in just the right hint of understeer for this road, and the back end complies with everything thrown at it; I always feel it, but it never threatens. The Bilstein PSS10 coil-overs are set soft to soak up the significant bumps, dialed to 1 of 10 in front and 3 of 10 in the rear (Verlaque auto­crosses the car at 5 and 7).

“Within the last six months, I had the suspension installed,” he mentions. “I was getting photographs of the car, and I could see that, in a turn, the outside of the car looked like it was going to scrape the tarmac. And the inside…you could fit your fist between the tire and the fender.” 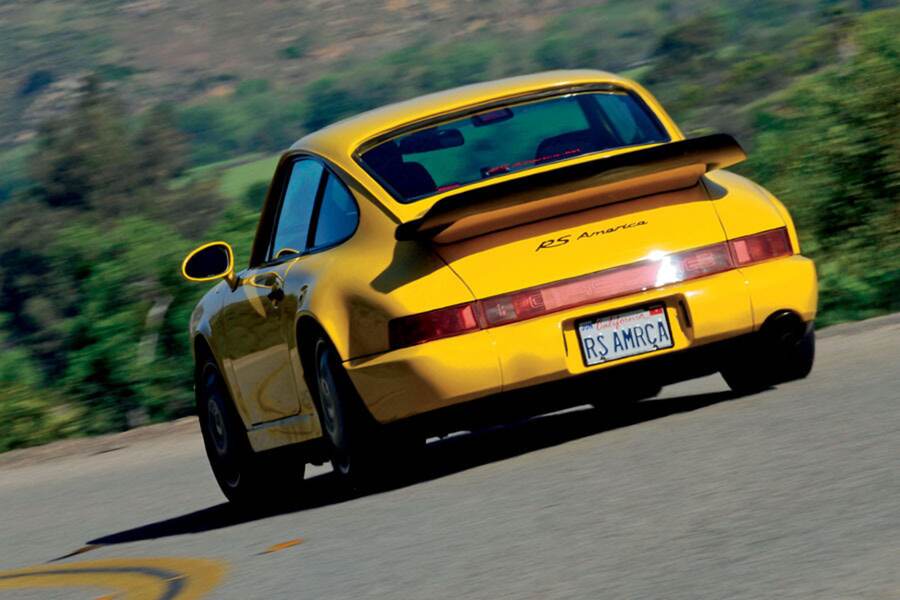 Not available on this side of the pond, the rest-of-world 964 Carrera RS was a high-performance edition built to homo­logate competition-grade 964s. It featured a stiffened, seam-welded tub, a ten-horse power advantage, 40-percent stiffer suspension, thinner glass, and the deletion of niceties like electric window lifts. The RS America, on the other hand, was born with a different intent.

The story begins at the dawn of the 1990s, with Vic Elford and some bad weather. Elford was running the Porsche Owners Driving School at the time. “We were conducting one of the PODS events at New Hampshire’s Loudon track and had a complete day washed out with torrential rain and storm conditions,” begins Elford. “To keep everyone happy, I turned most of the day into an open forum.”

During the discussions that ensued, the dichotomy of attendees hit home for El­ford. “There were two types of Porsche owner: those to whom ownership announced their status in their community or their chosen profession…(and) the second group, (who) owned Porsches because of their love of a performance car that they enjoyed driving hard and fast and which had already proved its worth in competition around the world.” 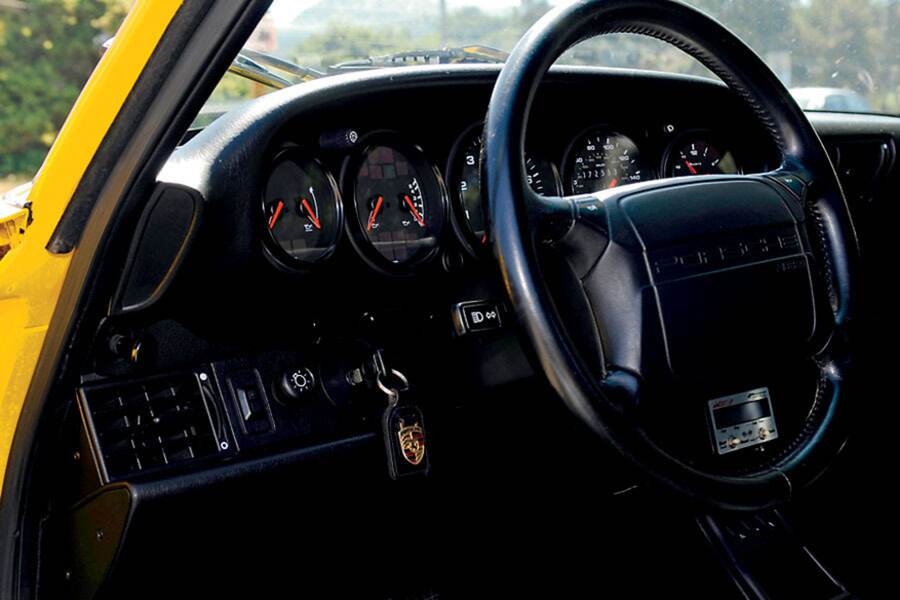 The latter group bemoaned the perception that the 911 had become too much of a luxury GT and had drifted from its lightweight, high-performance roots. Follow­ing the Loudon event, Elford sent a note to Brian Bowler (head of PCNA prior to Schwab) noting the feedback. Bowler asked Elford to draw up a proposal for a no-frills version of the 911.

Elford’s original specification eliminated much electric equipment: sunroof, windows, mirrors, speed-actuated rear spoiler, air conditioning, high-end stereo. In an effort to save weight, he also proposed elimination of the “unnecessary” rear seats and sound insulation and the substitution of simpler interior door panels. On the other side of the equation, his spec keyed on several performance-oriented items: 17-inch wheels, M030 sports suspension (same as the Turbo’s standard suspension) and a return to the fixed, and recently discarded, Carrera 3.2 tail.

With the purpose of improving on-road feedback to the driver, Elford suggested the elimination of power steering. He consulted with Hartmut Kristen (today the head of Porsche Motorsports, then director of Marketing at PCNA) throughout this process before sending the completed proposal to Bowler, who forwarded it to Porsche AG.

Upon receiving it, the factory engineers noted a couple issues which centered on U.S. Department of Transportation regulations. Dashboard padding requirements made it impossible to fit manual window cranks, and the absence of a rear seat would not be permitted if there was any possibility of people sitting there with no safety restraints. Thus, electric windows could be retained, and simple storage bins could be devised for the area that formerly held the rear seats. Beyond that, response from Germany was positive, and the project was ultimately green-lighted. 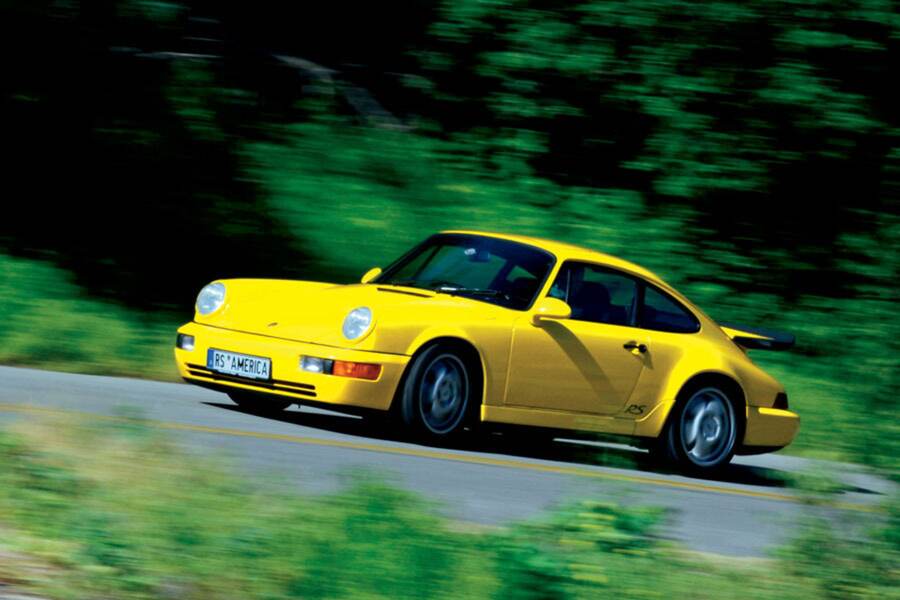 During model years 1993 and 1994, 701 RS Americas were produced. Most of the 84 1994 models differed from 1993 models only by the inclusion of rear seats. True to its “simpler is better” objective, just four options were available (versus four dozen for a standard 964): limited-slip differential, air-conditioning, sunroof, and radio/cassette player. Also, the RS America was offered in only five colors: Black, Silver Metallic, Grand Prix White, Guards Red, and Midnight Blue Metallic. Or, like the first owner of Verlaque’s car, the buyer could specify color-to-sample.

Three days after our Latigo Canyon run, Verlaque and I meet near Valley Center in San Diego County for a photo shoot of his immaculate 964. He suggests I move my camera equipment to the RS America for a short drive to the “pretty stuff.” I oblige. Soon, he’s hustling the yellow coupe up Couser Canyon Road with me as passenger.

The presence of a Hot Lap Timer, harness bar, and Recaro SPD seats are not always indicative of driver aptitude. In this case, they are: Verlaque’s smooth but quick inputs and adept car control allow me to concentrate on potential photo locations rather than obsess about the cliff to my right. He’s happily amenable to my needs, but it’s clear he has a side agenda. Asserting Couser Canyon is among the top five roads in the San Diego area, he implores, “You really must drive this road on the way back.” Again, who am I to argue?

“Everyone in this area who likes to drive knows this road. We’ve done PCA tour drives here,” Verlaque continues as I slide behind the wheel. He quickly adds that varied skill levels of club members means that four-tenths of maximum pace is the rule for those events. 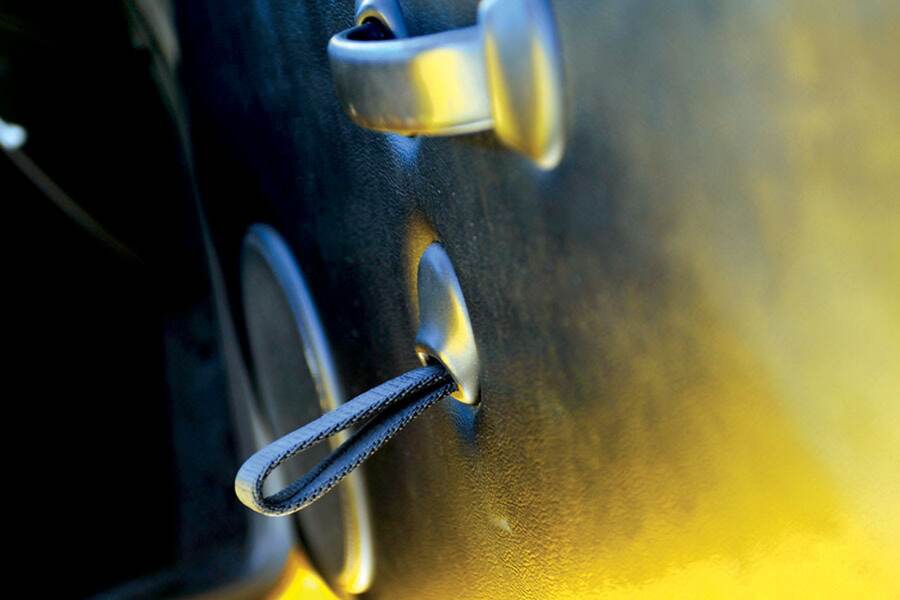 “Those of us who are active in auto­cross or DEs use those drives as sighting runs for future spirited drives,” he says. As we careen down the road, such caution seems especially prudent when the front Yokohamas encounter a patch of sand and a moment of understeer ensues. Back on track, the conversation continues.

Verlaque moved from the UK to San Diego in 1987. He brought his passion for Porsches with him, having acquired a Carrera 3.0 in 1984. By 1996, still Porsche-less, he bought a 911 Carrera 3.2, joined the PCA, and became active in the club. He has served as region President in 1999, Tours Chair for four years, Autocross Chair for one year, and Chief Driving Instructor for four years. Schwab’s words echo, “If driving is for fun, this is your car…”

“I was driving to a friend’s house, and I saw a garage door closing. In the garage was a bright yellow 911,” begins Verlaque about his initial interest in the RS America. He recognized 964 bumpers, but the car had a fixed tail. His interest was piqued. “I went and rang the doorbell, and this fellow came to the door. He asked gruffly, ‘So, what do you do? You go around asking people what’s in their garage?’” Verlaque laughs. Eventually, the gentleman relented, and allowed the…er…interloper to see the car. Nine months later, in March of 1999, the keys exchanged hands, “after a lot of tussling back and forth.”

Verlaque’s fascination with the car grew and, in early 2001, he started a website to reach out to other RS America owners. Today, rsamerica.net serves as a knowledge base about the car and an online registry. 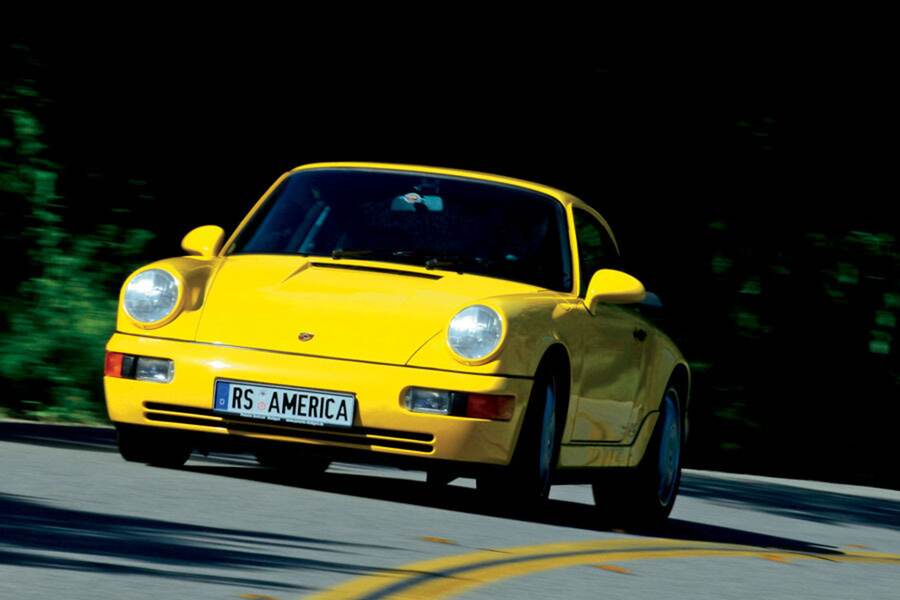 “My primary goal is to share information with people who are interested, and to get visibility for the car,” he says. “There are some haters out there, people who rubbish the car and say, ‘Oh, it’s just a stripped C2 to save money, just because Porsche couldn’t sell cars, and it’s not really worth anything.” Verlaque considers the 964 RS America to be a “love it or hate it Porsche.” And while that’s a bit extreme, it is true that the car has always polarized some Porsche aficionados.

“It’s nothing more than a marketing exercise, a poseur Porsche not deserving of the ‘RS’ moniker,” and “Why would anyone pay more for less?” were among the unfortunate refrains I heard during my years as an RSA owner.

To the latter, it’s worth noting that the price of a new RS America during its production run was precisely $10,000 less (!) than a base 964 Carrera 2 — and the price of the RSA included the aforementioned performance equipment. Can you imagine one of today’s special-edition Porsches being sold for less than its higher volume counterparts? Impossible!

It has only been in the secondary market that the price of these special-edition 964s have been bid comparatively upward, now commanding a premium of $10,000 or more over a base Carrera 2. It seems this is likely because of the RSA’s relative scarcity. To the former, the thought that paring 80–90 pounds of extraneous weight from a 911 and outfitting it with a sports suspension relegates it to “poseur” status is…well…incomprehensible. As for “RS” worthiness? Well, Porsche’s naming conventions remain a slippery issue even today; there’s really no sense tackling that now.

Nearing the end of the Couser Canyon run, I find myself wishing for a bit more stiffness in the yellow RS America’s suspension on this fairly smooth road. Ver­laque left the PSS10s at 1 and 3 (front/ rear) after Thursday’s bumpiness, and he agrees. Still, I suspect it’s better than the as-delivered M030 suspension would have been here. I’ve driven stock 964-era Turbos and struggled with excessive squishiness and poor roll coupling, the back end always being an extra tick out of sync with the front.

Verlaque is objective in his assessment of the RSA’s out-of-the-box performance. “I have no illusions about a stock RSA being a track car. If you want to make an RS America into a track car, you have to make the exact same modifications to it as you would make to a C2,” he says, alluding to the suspension work and the addition of other competition components. “Rather,” he concludes, “I like to think of this car as a street 911 with a track attitude.” It’s an explanation that’s hard to argue with. 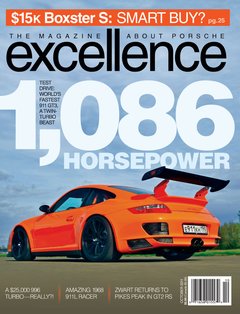