Those of us who are growing tired of the 964 backdating trend have likely never seen Theon Design’s creations. 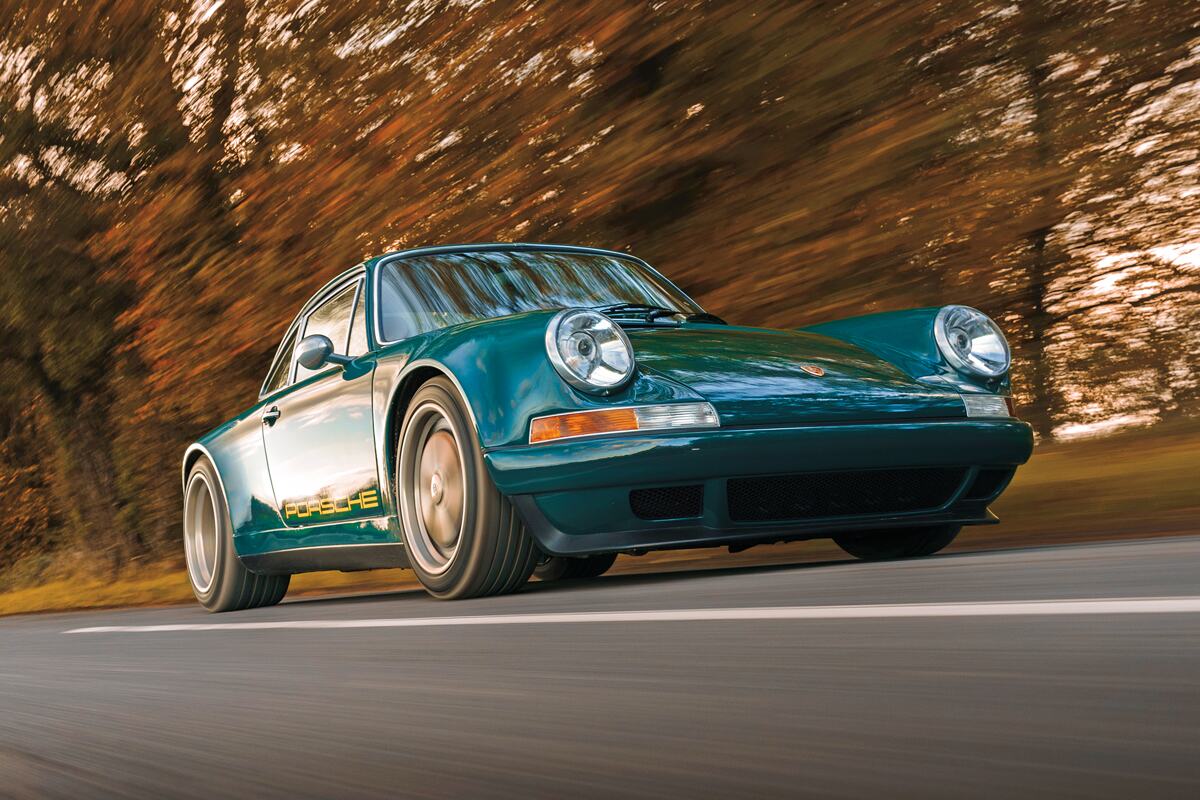 This is the third Theon Design-built Porsche 911 I’ve driven, but it’s different from the others, as it has a supercharger bolted to its 3.6-liter air-cooled flat-six engine. Like the other machines built by this Deddington, England-based company, it’s based on the same 964-generation 911’s underpinnings. Plus, its bodywork is largely made of carbon fiber sourced from one of the inconspicuous companies in the UK’s “Motorsport Valley,” which is a key supplier to Formula One teams. Theon can also build you a steel body if you want it, but it’s more expensive due to the greater time involved in production.

Adam Hawley, a car designer who worked with various OEMs, including Jaguar, BMW, Lexus, and Lotus, before setting up Theon Design, modeled the lightweight body using CAD (Computer-Aided Design) software. His modern skillset has transferred perfectly to his driving ambition of creating the ultimate air-cooled 911, using new techniques to create something unique.

Each car that comes out of Theon’s workshop is representative of the client’s wishes but built to the company’s exacting principles. For example, the car you see here, dubbed BEL001 (its owner is Belgian), was commissioned by a customer who requested a supercharger. While that’s not unique, it’s unusual, with the aim of creating a car that combines the best elements of a long-legged, muscular grand tourer with the poise and engagement of a classic 911. 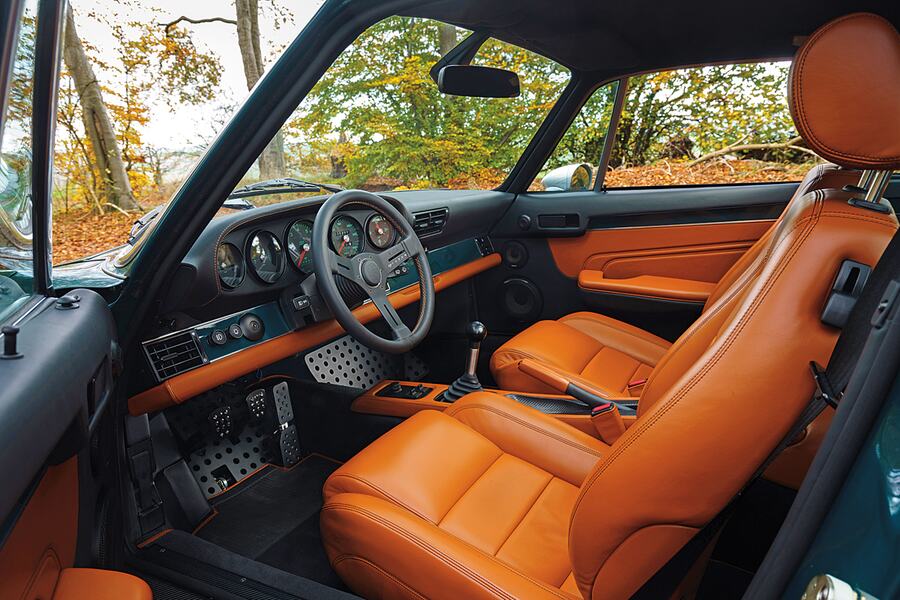 To start the build, the 3.6-liter flat-six was stripped and fitted with rebuilt and re-engineered independent throttle bodies, ported cylinder heads, motorsport-grade Mahle barrels and pistons, Carillo rods, and custom profile camshafts. Theon then added a Rotrex supercharger, which uses a centrifugal unit with patented traction drive technology—which uses synthetic hydrocarbon oils to optimize the friction forces between components—allowing it to deliver greater efficiency with reduced emissions and increased responsiveness.

The supercharger is neatly integrated where the air conditioning unit would typically be, with passenger cooling now taken care of by an electrical system in the front of the car. In addition, the existing A/C unit supports have been substantially reinforced to cope with the increased stresses of the supercharger. This layout is so clean that it looks like it’s always been like that, in line with Hawley’s exacting “OEM+” goals for all of Theon’s builds.

There are also twin charge coolers that work with a water-methanol injection system mounted on the opposite side of the supercharger. Hawley explains that this negates the need for an intercooler, which is difficult to neatly package in the 964’s engine bay. 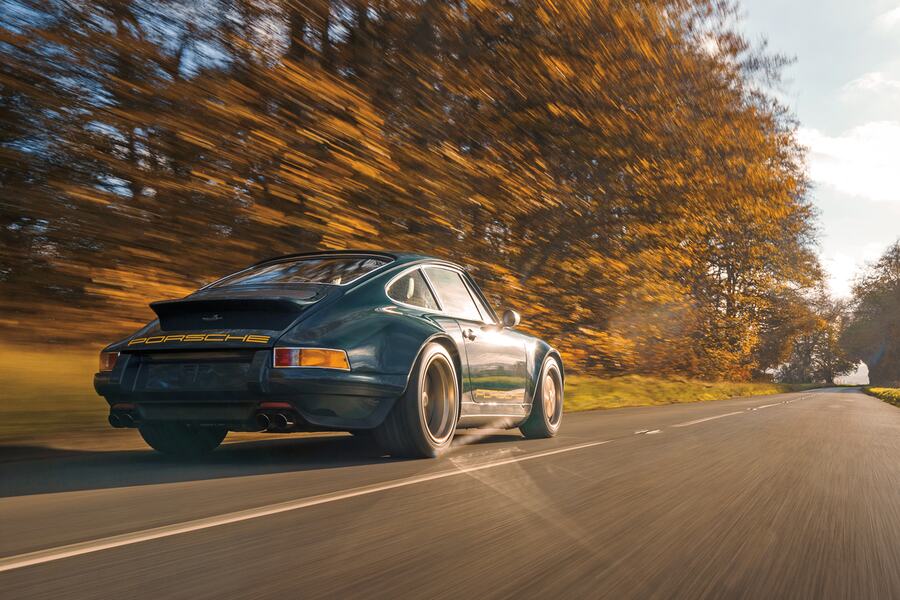 “This setup means we can avoid adding intake apertures in the bodywork and retain the super-clean, Theon look that’s so important to us, both in the engine bay and externally,” says Hawley. In addition, the water-methanol solution provides increased cooling and bumps the fuel’s octane rating from 98 to over 110, boosting power.

The redone 3.6-liter six now produces 400 hp and 367 lb-ft of torque, with little difference in power output from Theon’s other engine choices. However, it’s the different level of torque delivery that is the defining characteristic. The engine pulls strongly from low revs without any complaints, with the supercharger adding more grunt at the lower end of the rev range. It maintains that strength across the entire powerband, with the redline at 6,800 rpm, and there is real incentive to run it up to that point. This retains the enthusiasm at high revs of a naturally-aspirated engine but with the flexibility of useful low-rev torque.

This versatility and the ability to stay in a higher gear and ride the torque or chase the redline while shifting gears fit the owner’s brief. The engine’s range is such that the car retains its original five-speed G50 transmission, with no need to add a six-speed from a 993. There is reward whether you’re enjoying the rich wave of torque or hitting the redline, with the switchable sport exhaust allowing you to experience it differently. The standard setting is pleasingly robust but not dominant, with the more vocal mode increasing the intensity and filling the cabin with richer notes. 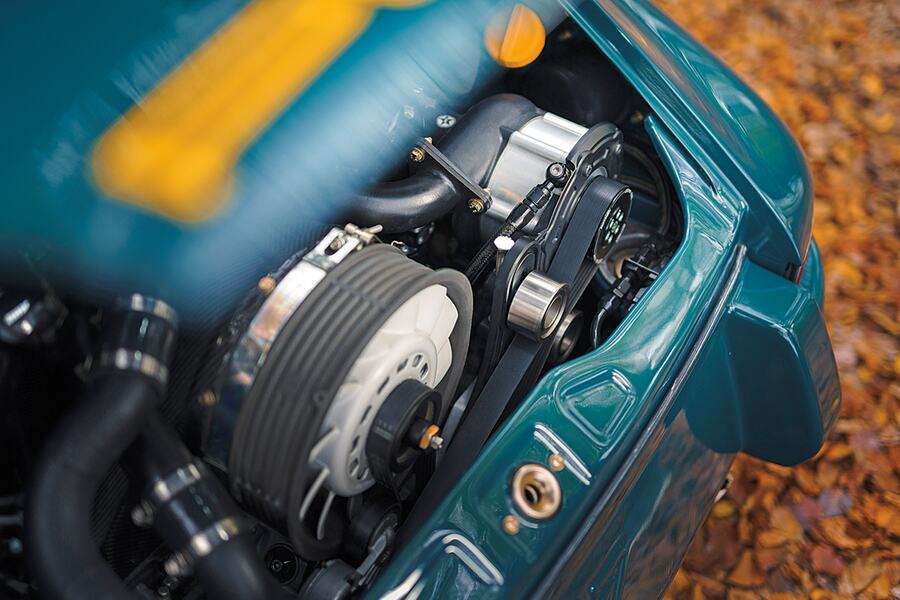 The exhaust is joined by the noticeable chatter of the supercharger on overrun, with each gearshift signaled by its sound. This was a deliberate request from BEL001’s owner, who didn’t want to hide the engine’s supercharged nature. In addition, the responsiveness from pedal to push is immediate, with no perceptible delay, making the engine feel naturally aspirated. The responsiveness and performance are undoubtedly aided by Theon’s weight-saving measures. This car, fully wet (including a full tank of fuel), weighs just 2,789 lbs, thanks to the extensive use of carbon fiber in the body and Theon’s obsessive attention to detail on elements that will never be seen.

Walking around the workshop and seeing other cars in the process of being built underlines this, with Hawley always looking for ways to reduce weight, improve efficiency, and tidy things up. This is best demonstrated when he discusses making a part visually symmetrical above the rear bulkhead, even though it will never be seen when it’s trimmed.

The bodywork is immaculate, with tighter shutlines than any 964 that left Zuffenhausen. The flared arches, front and rear, are to Theon’s own specification and are beautifully proportioned. The detail work is extraordinary, but no single element stands out. Theon’s neatest trick is to hone and tweak in a manner that is in keeping with and reverential to classic, long-hood 911s. There is nothing overbearing or standout, so the overall effect is wonderfully classy and beautifully understated. 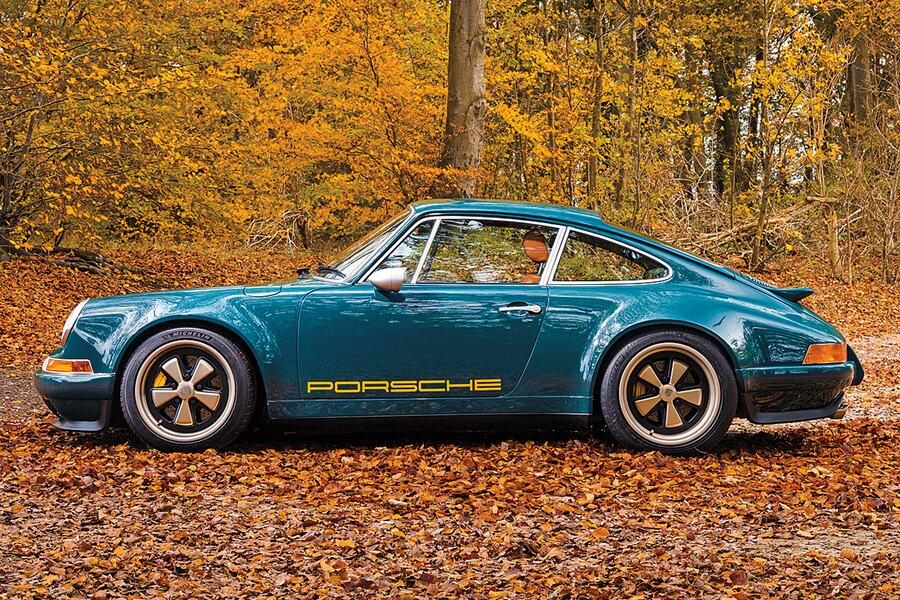 This is also true inside, where Theon’s approach to the interior trim and finish is equally exacting. The Autumn leather creates a rich contrast to the Aquamarine exterior paintwork (a color derived from Fjord Green from the early Porsche 356 palette). The dash is delightfully uncluttered, with a carefully curated mixture of materials, including carbon fiber, leather, and metal, all beautifully finished.

In keeping with the touring goals of the car, the front seats are not the usual tight-fitting bucket seats that often feature in builds. Instead, they have custom foam fitted on existing Porsche Recaro frames and mechanisms, hugging rather than gripping you and making entry and exit more dignified and easier than racing bucket seats. In front of the driver’s seat is a custom-stitched Nardi steering wheel, with Theon offering these in various sizes to suit each owner’s wishes.

Hawley’s pursuit of simplicity is evident throughout. For example, there is no stereo head unit, just a small recess in the dashboard in front of the gear lever, behind which is a magnetic charging unit to allow you to neatly mount and power your smartphone while easily accessing it for navigation, streaming, and online radio services. When you lift the front trunk lid, the same attention to detail is evident there, with black leather covering most surfaces, including the carbon-fiber fuel tank, and a 964 RS strut brace, covered in the same Autumn leather as the seats inside. 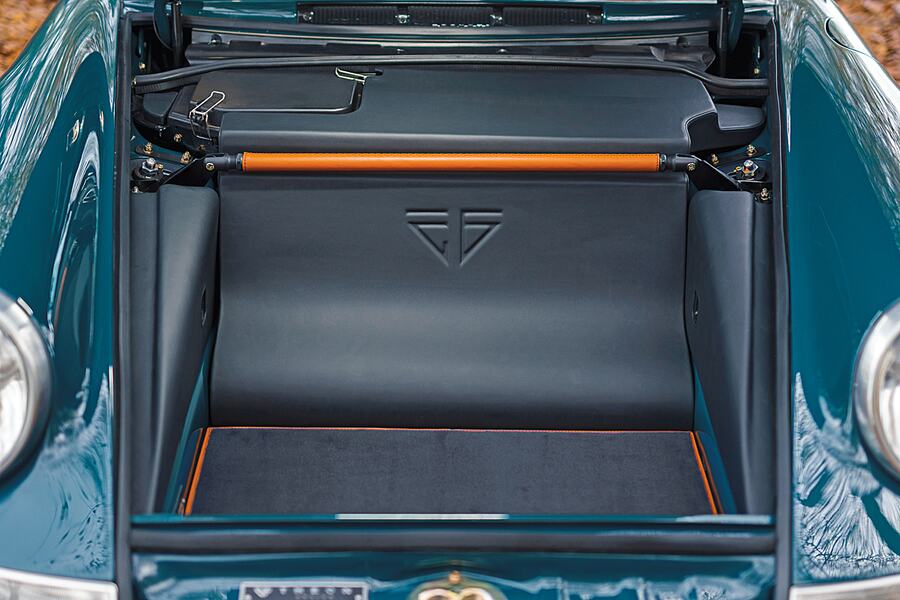 BEL001 features a TracTive suspension system developed in conjunction with the supplier, offering a choice of five different modes to cover almost every requirement, from a taut ride on smooth roads to a suppler response on rougher terrain. The geometry experts at Center Gravity have also been involved in setting up the car, and the overall effect is impressive.

On the challenging patchwork of pockmarked tarmac roads around Theon Design’s HQ, the middle setting works best, providing fine control and compli- ance that removes sharp edges from the ride without sacrificing engagement. Achieving this setting is as simple as reaching in front of the gear lever and turning the understated black knob through its five positions.

Any pre-water-cooled 911 feels agile and enjoyable on UK roads, but combined with the sophisticated, controlled ride, fine balance, plentiful grip, and effortless power, BEL001 is even more enjoyable. The steering is rich in detail, turning in with more conviction than a standard 964, thanks to the wider Michelin Pilot Sport 4 tires (225/45ZR17 in front and 275/40ZR17 in back) fitted to 17-inch Fuchs tribute wheels, plus Theon’s shift of mass toward the front of the car to improve weight distribution (around 50:50, according to Hawley). 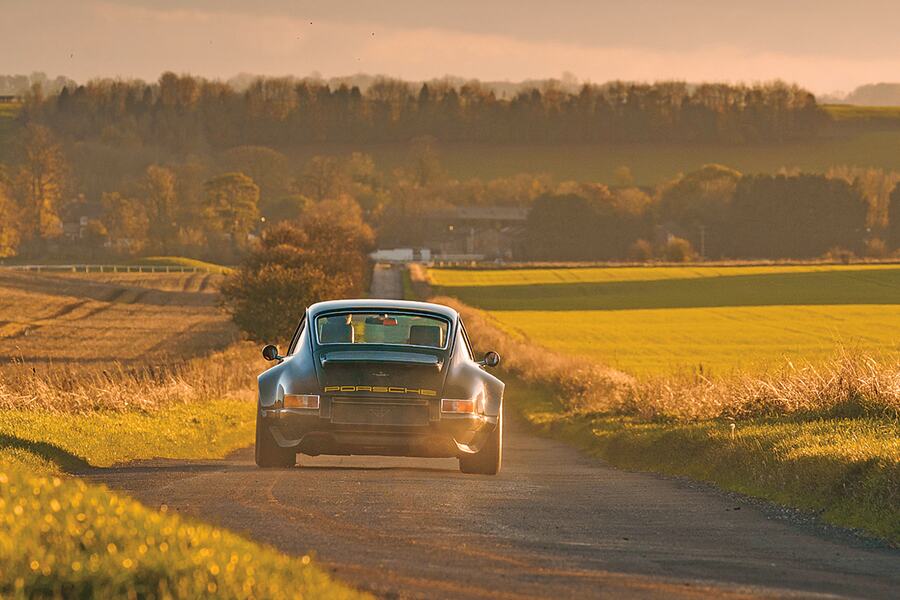 The steering, like the A/C and heating system, is electrically powered, with the small Nardi wheel offering lots of feel through its rim. The pedal weight and feel, as well as the way the gearshift moves across its gate, combine to create a driving experience that is wonderfully engaging and analog but with a contemporary efficiency and ease that defines the best 911 builds.

The temptation is to drive this car more, delighting in the responsiveness of the boosted six, the joy of heel-and-toe blipped downshifts, the chatter of the supercharger, and the always ample power when you get back on the throttle. All of this is accompanied by a rousing soundtrack that is pleasingly different but oh-so-familiar in a cabin that underlines how modern cars have become needlessly, distractingly complicated. Cars like BEL001 forcefully and pleasingly demonstrate that this is not necessary. When it is delivered to its owner, they will be in for a real treat. I hope they use it as they intended because however beautiful it all is, there is real substance underpinning it all that engages and delights in equal measure. 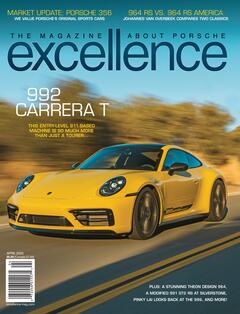 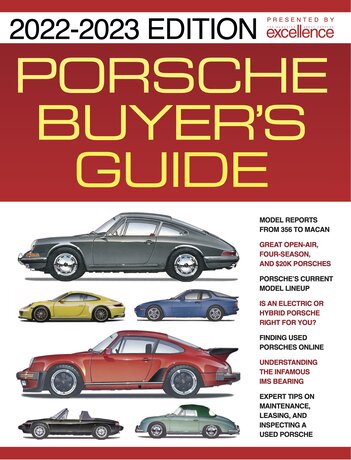