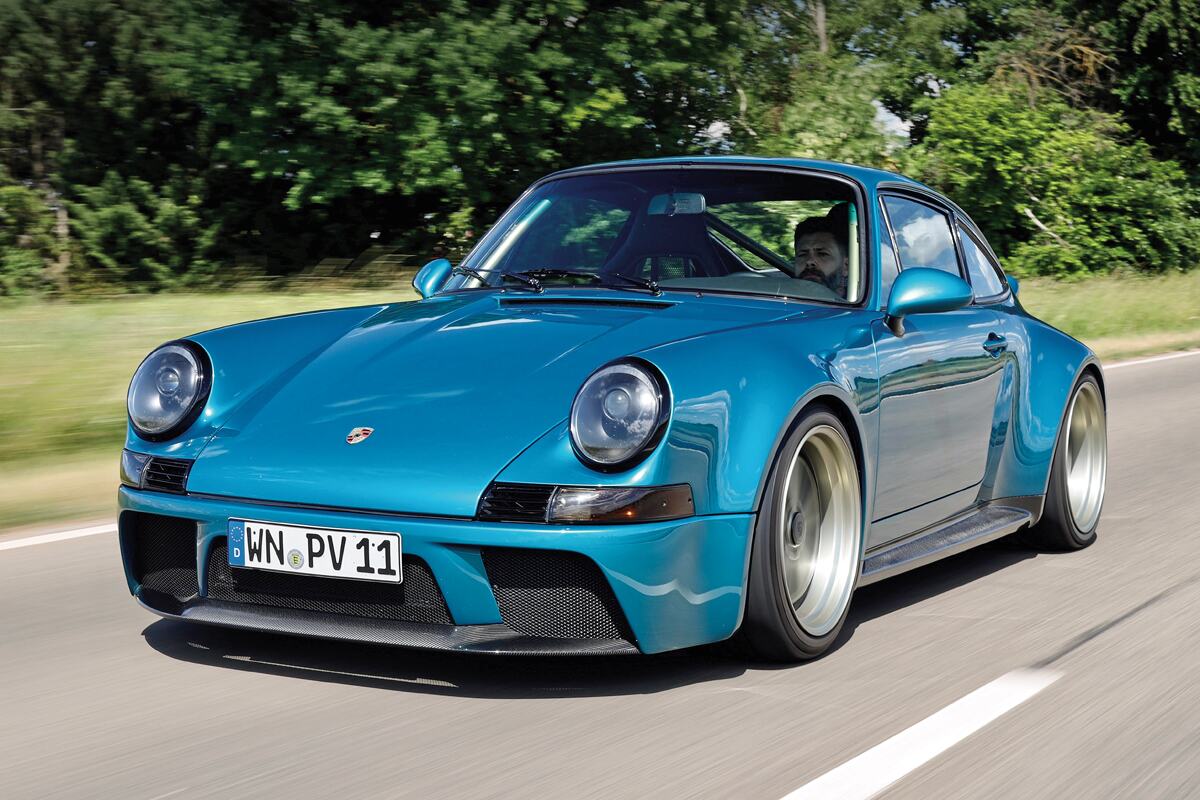 With countless race and rally wins since its birth in 1964, the Porsche 911 has always skirted the fine line between a road car that goes racing and a race car for the road. The Evomax MAX11 seen here decisively crosses that line by clothing the steel innards of an already lightweight 1972 long-hood 911 in bespoke carbon-fiber body panels and powering it with a 997-generation 911 Cup car engine.

Based in Markgröningen, Germany, near Stuttgart and not far from Porsche’s home in Zuffenhausen, Evomax is a relatively recent entrant to the Porsche tuning world. However, the trio behind the company, Rainer Hildebrandt, Mathieu Wöhrle, and Miguel Morais, are no strangers to the automobile business. They are also the owners of M&W Classic GmbH, one of Germany’s most respected classic Mercedes restoration companies, renowned for its specialist knowledge of the 300SL (W198) Gullwing and Roadster of the late 1950s and early 1960s.

The trio founded Evomax GmbH in 2019 to satisfy their common love for the Porsche 911. The company name combines ‘evolution’ and ‘maximum,’ and the MAX11 I drove certainly meets that description. 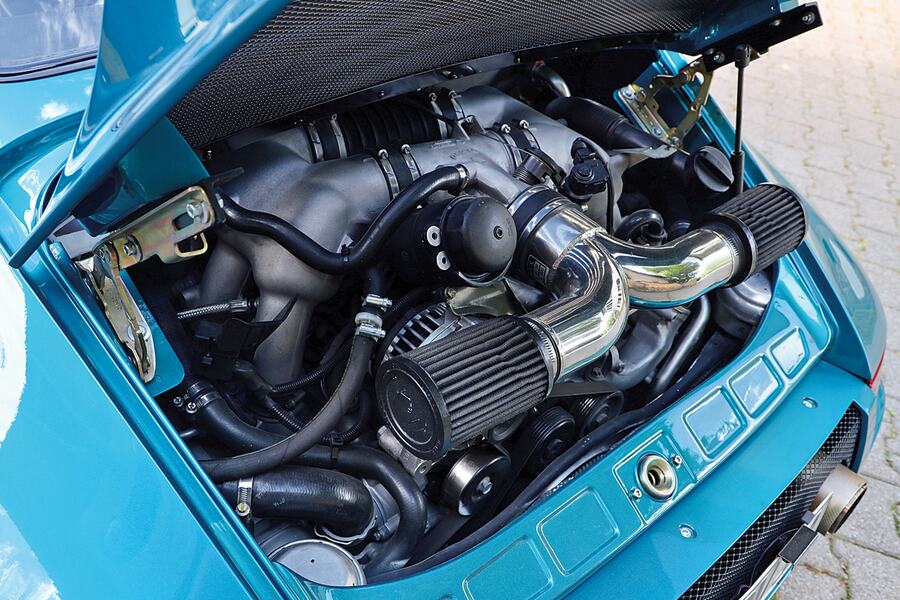 Rainer Hildebrandt has been a car fanatic since childhood, and you can see the passion in his eyes when he describes the red Porsche 911 Cabriolet that he idolized in his teens. He is a successful businessman who has owned many exotic cars, but the 911 has always figured as his dream car. “I have driven a lot of cars over the years, but none was like a Porsche 911,” he said. “This car is like a part of you and makes you feel good.”

For many, the story would end there, but Hildebrandt is one of those perfectionists who likes to optimize things. He prefers smaller, narrower cars and likes the idea of fairly recent technology in classic-looking cars for ease of ownership. A few years ago, he began the search for a more bespoke 911 experience than the new cars offered. “I visited Singer in California and really liked their cars,” he explained. “Unfortunately, at the time, they did not yet have EU homologation, so I would not have been able to register the car in Germany.”

Hildebrandt then paid a visit to Ruf in Pfaffenhausen, Germany, and was very impressed by their engines and technology. “These separate experiences helped me to crystallize my ideas, and I concluded that I wanted a car that looked like a Singer and drove like a Ruf,” he said. 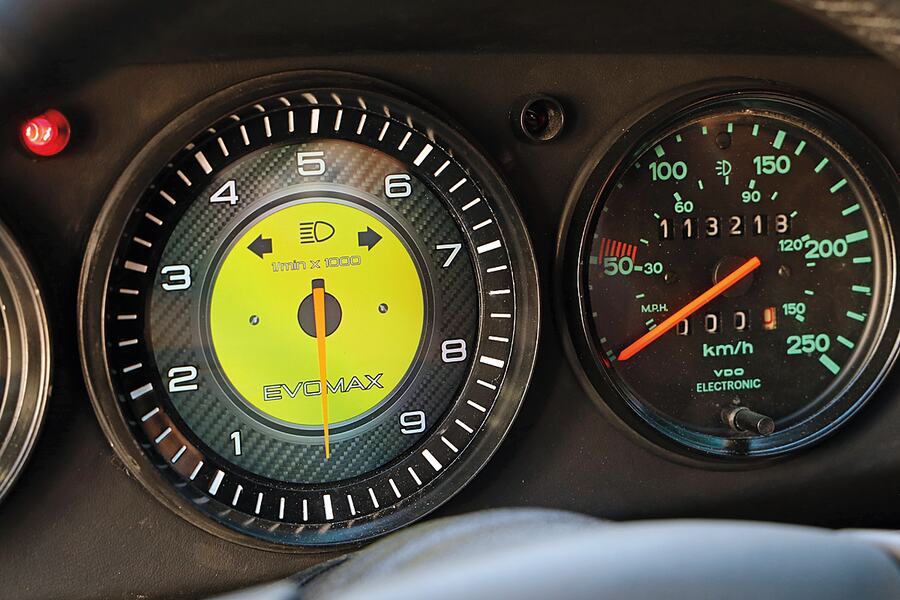 A discussion with Wöhrle and Morais, the tech genius of the trio, gelled with their common 911 passion, and the idea of forming a separate operation to build bespoke 911s to customer specifications took shape. Evomax GmbH was born from this four years ago.

Next, designer Jörg Rudolf joined the Evomax project. As they build concept vehicles for the likes of BMW, Bugatti, Lamborghini, Mercedes, and Porsche as well, Rudolf and his company, IMMstudios, were well qualified to pen the styling for the MAX11 and create the prototype. Based in Renningen-Malmsheim, a stone’s throw from Porsche’s Weissach R&D facility, they are also a fairly local company.

One of the unique features of the Evomax formula is the offer of different levels of power and intent around a common base. Since the bodywork is carbon fiber, the factory steel core was retained, and the passenger protection cell was bolstered with a bespoke roll cage. Apart from further enhancing crash safety, the tubular-steel roll cage adds significant torsional stiffness to the shell, which in turn aids suspension performance. 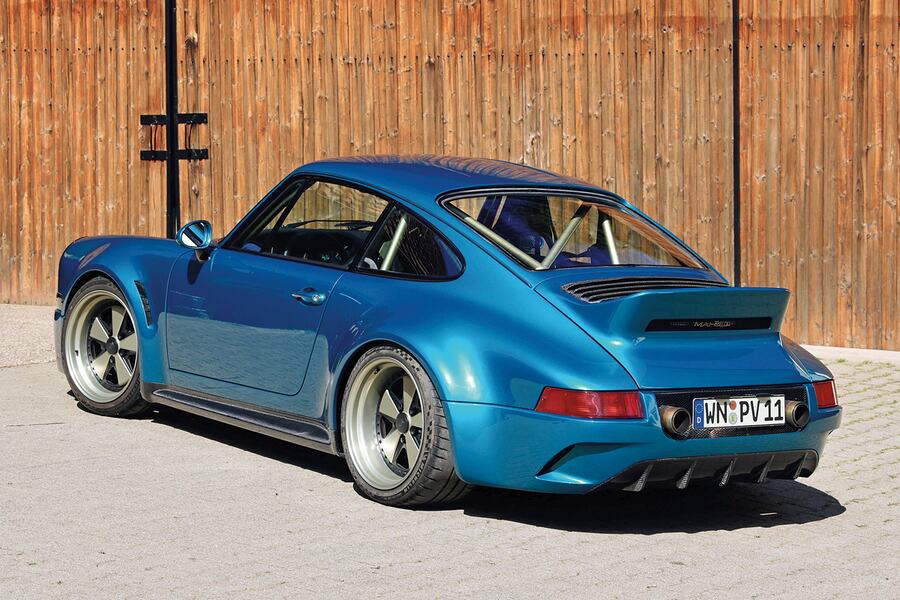 While Singer uses the 964 and Kaege Retro and Gunther Werks favor the 993, Evomax took the unusual step of covering the spectrum from the F and G-model 911s to the 964 as possible base cars. In the case of the first two 911 models, suitable modifications are made to replace the torsion bar suspension with fully-adjustable coil-overs, while the 964 has its factory coil springs uprated to fully-adjustable coil-overs. From there, three models are offered to answer the power and intent questions, all sharing the same basic carbon-fiber body shell, roll-cage, coil-over suspension, and uprated brakes.

The engine of any car often makes up half its character, particularly with Porsche’s 911, where every single variant produced since 1964 speaks to the driver in a slightly different way. With this in mind, Evomax offers its clients the choice of three very different power units that help to create the distinctly different characters of a daily driver, track-day weapon, or an autobahn stormer. 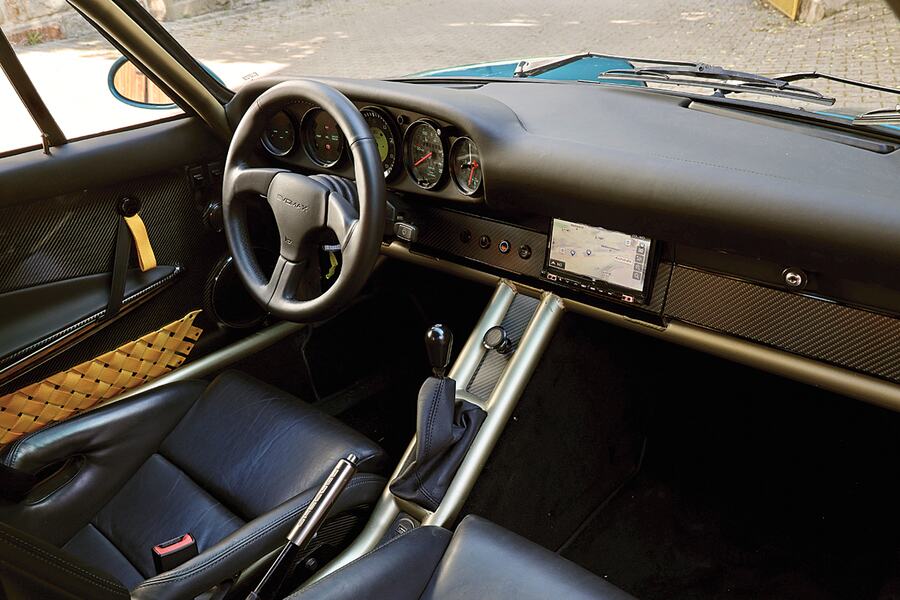 Addressing the needs of the serious, hard-core Porsche enthusiast, this racing engine has the most inspirational soundtrack and visceral feedback of the three Evomax models. The MAX11 is born with the promise of being the most engaging drivers’ car of the trio as well.

While the engine in the later 991.2 and 992-generation 911 GT3s is almost identical to the one that powered the concurrent GT3 Cup race cars, that was not the case back in the 997 era. 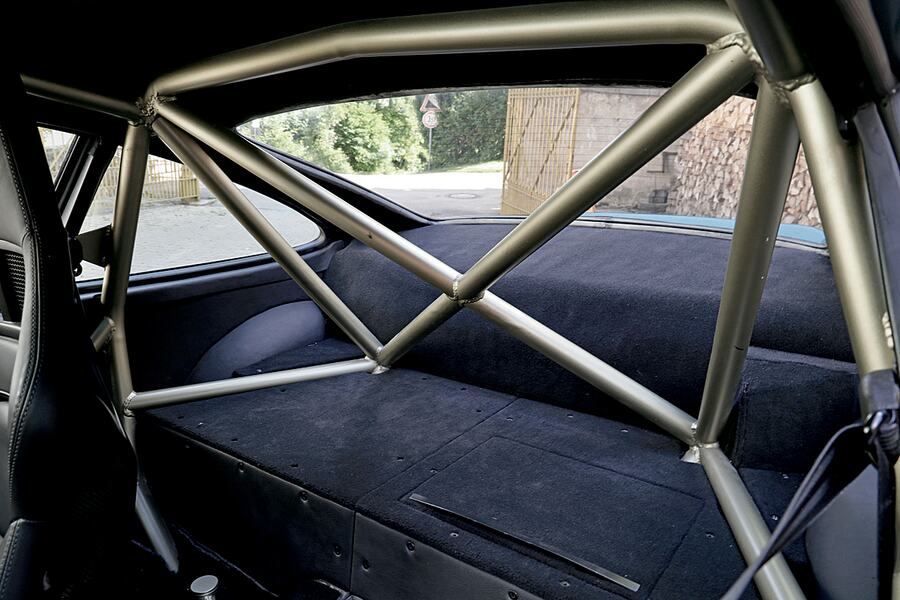 Needless to say, there are a few engines available from race cars of all years that came to an untimely end in the heat of competition, and one from a front-ended 997 GT3 Cup car powers the Evomax MAX11 I am driving today. The 997 GT3 Cup flat-six engine is not only much larger and heavier than the air-cooled 2.4 that originally came in our feature car when it left the factory in 1972, but it is also water-cooled. As such, a completely new radiator system with electric fans had to be installed up front with water lines running back to the engine.

The lusty race-bred powerplant behaves in traffic thanks to fine electronic tuning, but it never lets you forget that it thrives on high revs and big throttle openings. The single-mass flywheel that helps the engine chase the redline with such alacrity also makes you pay attention to your throttle and clutch work much more than a stock 911 in traffic. In short, this is a car for hard-core enthusiasts.

That same tetchy behavior in traffic has a welcome counterpoint once you find a clear stretch of open road. Then you would be seriously remiss not to aim this 2,425-lb 911 towards the horizon and drive it as fast and as deliberately as you can, reveling in every gearshift. 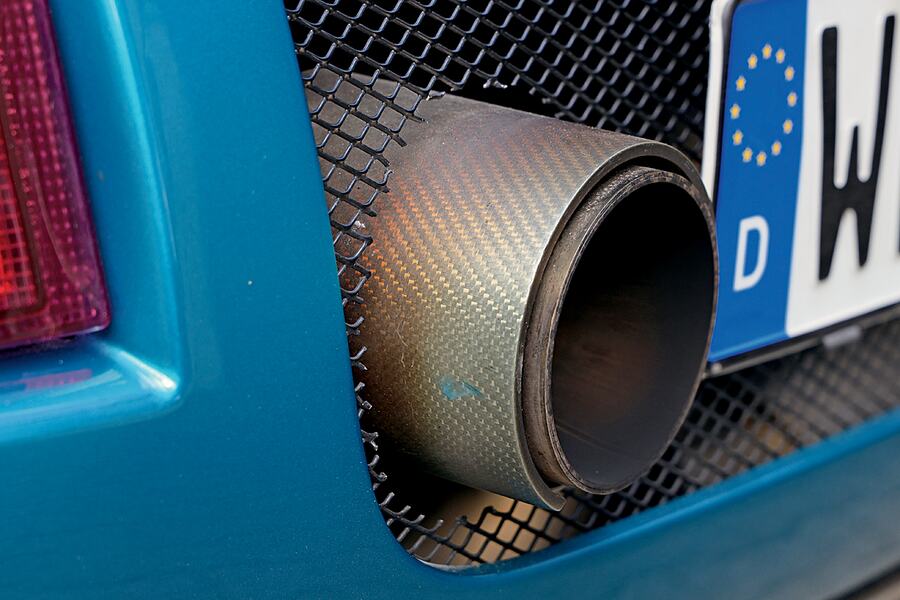 The flat-six symphony in the minimalist cabin is intoxicating as the rev counter needle soars towards the redline. At the same time, you are reminded of just how efficient the formula of big horsepower in a light car is. Lotus Cars founder Colin Chapman famously said, “For speed, add lightness.” Of course, adding more power as well is even better!

A 911 with big tires and unassisted steering is never light at the helm at parking speeds, but once you get going, the steering lightens up and starts talking to your fingertips with the superb level of communication that helped make classic 911s so popular. Thanks to the stiffened bodyshell and uprated chassis, the latest 225/40ZR18 and 285/30ZR18 Michelin rubber and powerful Brembo brakes, this car changes direction and stops as well as it goes. Once you have begun to explore its capabilities and found it a willing and confidence-inspiring partner with modern levels of grip and handling, you have to remind yourself that there is a 50-year-old F-Series 911 at the core of this car.

While we appreciate the Evomax concepts of the entry-level Classic and the bombastic flagship Turbo version, the hard-core MAX11 with the Cup car engine as its beating heart is just the ticket if you are looking for an effective panacea for boredom. It would certainly be on our shortlist of ideal 911s for a rousing drive on a sunny Sunday morning. 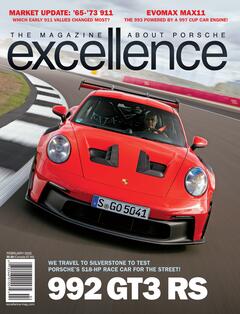