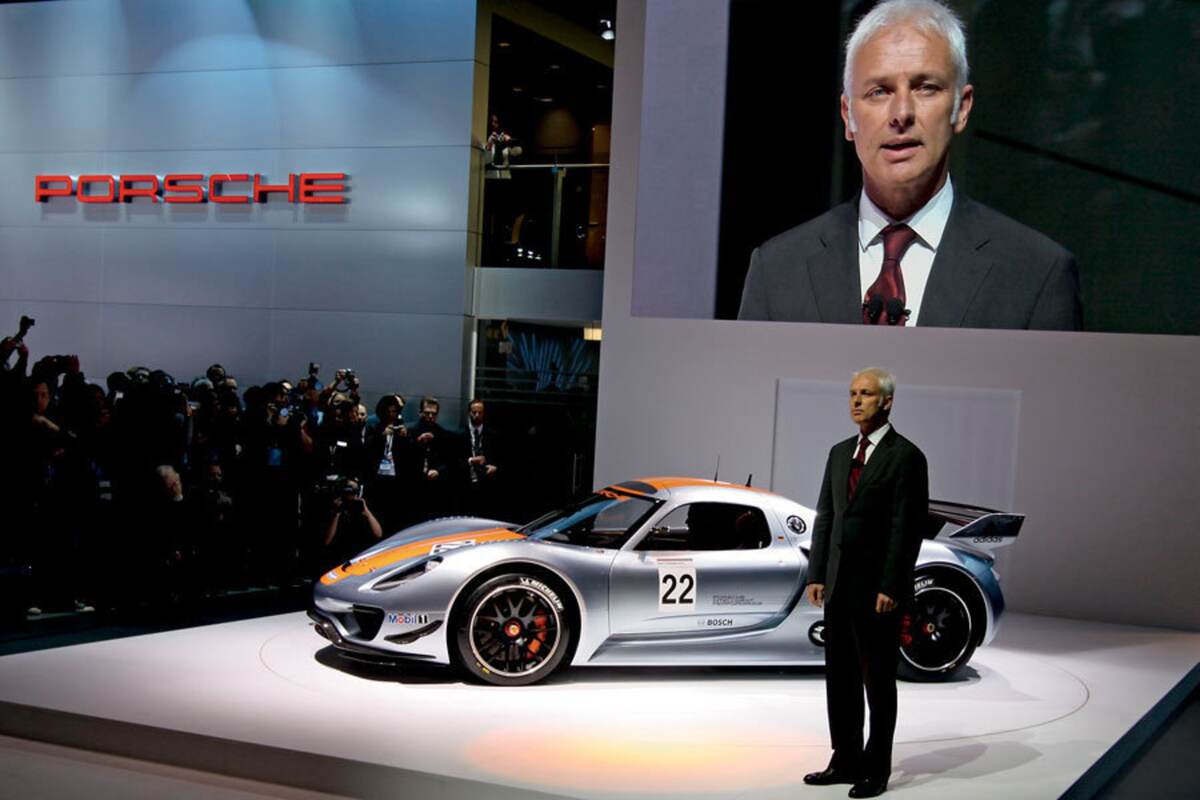 Porsche CEO Matthias Müller raised eyebrows at this year’s North American International Auto Show when he said that he plans to raise annual production to 200,000 vehicles by 2018. That’s well beyond the 150,000 that shocked the press a few months ago. It’s an ambitious plan, one that will change the face of Porsche — moving the company from four model lines to six and perhaps even seven. We were able to share some of Müller’s thoughts during a roundtable discussion with editors from The New York Times, Forbes, and Excellence (among others) in last issue’s Commentary, but the full discussion follows.

Excellence: Porsche pulled out of the Detroit show four years ago. Why did you come back?

What about new vehicles, like a proposed smaller Cayenne?

We are analyzing our chances in different segments and, at the end of the first quarter 2011, we will finish our project strategy. On the other hand, we should have a brand strategy to increase our sales volume. For example, in China we have 35 dealers and we want to triple that during the next three to five years. And of course we will increase our volume. Dr. Winterkorn (head of VW Group) says he expects 150,000 per year, but I suppose that it should be more. In strategies, we are looking forward to 2018; we now have around 100,000 per year, and I think at least we should double it.

When do you expect China to surpass the U.S. as your primary market?

I don’t know when. In 2011, I suppose the American market will be the biggest market, but, more or less, two or three years later, China could be our biggest.

What do Chinese Porsche buyers value?

I think it’s the same as in Europe and the United States, these are our customers who are luxury oriented. They have money, they like prestige, they like high value for money…

Do they care about motorsport heritage?

At this time, not so much. But we are working hard with our (hybrid) driveline component strategy to increase the topic of motorsports in China. For example, we are going to build a race track near the Formula One track in Shanghai, also in the neighborhood of the airport in Beijing, and so on. So I suppose the medium of a track like in Leipzig, Germany (next to the Cayenne/Panamera assembly plant) would allow our customers to use their Porsche sports cars in a way they love.

Is Porsche still committed to manual transmissions, or is the future all PDK?

I think very sporty car (customers) like manual gearboxes. But at the end of the day, maybe 80 percent or more will (order) PDKs. But, for example, a GT3 RS or a GT2 RS, that should be a manual.

Have you confirmed whether a sports car smaller than the Boxster is on its way?

We are analyzing that project. We have already available a technical concept for such a car based on the Boxster platform, which we can make a little bit cheaper using some parts of the modular system of Volkswagen, specifically the MQB (Modularer Querbaukasten, or Modular Transverse Matrix) — the next Golf platform. So that could be a way to have a platform to have a smaller sports car.

We’ve heard Porsche will take the lead in developing not just VW Group’s sports cars, but also its largest luxury sedans. What will that look like?

The basis is actually the Panamera platform (MSB, or Modular Standard Platform), which we will develop in the next generation. It is, concept-wise, the platform which fits the best for huge cars.

You can use as a basis the MLB (Modular Longitudinal Platform) or MSB for the A8 — it depends on what Audi wants. But, for example, a Bentley Continental could fit on our Panamera platform, as (could) a Lamborghini Estoque.

What’s the future of the Panamera in terms of model life?

I think the next Panamera will be in five years, but it’s possible to do the platform for the other customers in the Volkswagen Group earlier. In two or three years, that could be possible.

And, in return, Porsche has given up development of SUVs?

We have decided (at) a meeting between Winterkorn, (Audi CEO) Rupert Stadler, and me, some weeks ago…what is the most sporty brand in the group. And we decided that is always Porsche. And, due to that fact, we said the modular systems of high-performance sports cars have to be under the responsibility of Porsche. The second topic is that we said the MSB platform has special features — especially the very sporty cars — and that was the reason why we said, ‘Okay, Porsche has the competence to do that, and gets the leadership not only for the sports cars but also for the MSB system for the larger cars.’

The question was what should be the next platform for the third generation of the Touareg and Q7 and Cayenne? There we have seen that the MLB system of Audi fits very well to that issue, and that was the reason we decided that the next generation should be based on the MLB of Audi. Nevertheless, the Cayenne (version) will be developed in Weissach of course — the Cayenne with Porsche, the Audi with Audi, and the Touareg with Volkswagen.

Will future Porsches share their engines with other VW Group products?

I think we should have also an engine and gearbox strategy for the future in the Volkswagen Group. Besides the Carrera of course with the boxer, we should have reduced complexity in terms of engines. And I think Wolfgang Hatz, who is joining us (as head of Porsche R&D), is the right person to do that. Yes, we will share engines, both eight- and six-cylinder.

Who will have responsibility for these shared powerplants?

That is to be decided, (but it will be) either Audi or Porsche.

Is a four-cylinder Porsche in the works?

Would an inline four fit into the Boxster?

We would change the rear part of the Boxster platform, so it could work.

So a Boxster with a Volkswagen engine is under consideration?

That could be one solution — but in terms of the brand image of Porsche, it would be very interesting to have a four cylinder in a Boxster.

Could other VW Group brands use a flat four developed by Porsche?

No, no, no — that is exclusive for Porsche. Boxer is Porsche.

Today, Porsche makes more four-doors than sports cars. Is it becoming a company that makes sports cars on the side?

From my point of view, the core business is sports cars, which have to (fit) into the image of the brand. But to earn money it’s necessary to also deliver cars in other segments…but it is very important in these segments that Porsche shall have the most sporty car. If we get into the SUV segment, we should have the most sporty SUV…fast, powerful, steering, braking — everything. I think it is necessary for our customers to see I have a Porsche and not a badge on a Q5 or something else. It has to be a Porsche. That is important to us.

We are walking on the edge. On one hand sports cars, but on the other hand other segments — but very sporty — to increase revenue and volume.

How will your plans affect production?

The problem of Porsche today is we have in Zuffenhausen the Carrera, the Cayman, and the Boxster. And their life cycles are very close together, so this means we have a start of production within 18 months and we have end of production within 18 months. The life cycle in terms of volume (drops as a car gets older), so at the end of the day we have a problem with our workers. We have to change our life cycling, we have to give them a gap to have three curves and to straighten out the volume over a life cycle of seven years.

My target is to have a life cycle for the whole company, the whole brand, with a result that means we should have every year one big product event and a lot of smaller events. Today, we have four or five products, but together with the ‘Cajun’ (an Audi-based, sub-Cayenne SUV) and together maybe with the ‘550’ we have six and we are looking for a seventh model and then we could have every year one huge event and one bigger facelift. Then we have one and a half huge events, and some smaller events.

What about the Boxster/Cayman and 911, which are so closely linked in terms of production?

They always told me that the strategy of parts sharing will only work if the SOPs (for Start of Production) are near together. But I cannot understand that because, in the Volkswagen Group, we have had that question for ages with a lot of brands, with Seat, with Audi, with Sköda, with Volkswagen and so on, and we controlled it.

Is there any segment that’s off the table?

Of course, we are looking at a smaller sports car, below the Boxster. I always was very keen to take a close look at the 550, and I can imagine to have such a car in a few years. And we are really successful with the Targa in the Carrera segment, and why should a Targa not work on a Boxster? So I can imagine to have a Targa in the Boxster. Another question could be whether the Panamera is only one model?

Our engineers have a lot of ideas.

You have assembly lines in Zuffenhausen and Leipzig, but how will Porsche build 200,000 cars? Will VW build Porsches?

The Volkswagen Group (is targeting) eleven million cars a year. With the capacity they have today, they can build seven to eight million…so they have to build new factories all over the world. At Porsche, we have limited production in Zuffenhausen and limited production in Leipzig — but we have a lot of ground in Leipzig. I could imagine having more volume from Leipzig. We have to decide where we (will) build the ‘Cajun,’ for example; it could be Ingolstadt, but at the end of the day we have to also look at Leipzig.

Are you any further along in your decisions regarding Formula One or LMP1 racing at Le Mans?

Nothing new. It is difficult because there are lots of pros, but also cons. I think LMP1 is a very interesting class. The only problem is Audi. It’s a question of whether it’s good for our group if there would be a second brand in Le Mans and the American Le Mans Series, which could be Porsche, of course. Okay, then we would have a competition against Audi. I don’t know if that is good or bad for the group.

The problem is we have a lot of brands, and we have (fewer options) all over the world — it’s only Dakar, WRC, F1, and LMP1. It’s only four classes, and we have ten brands. But with Formula One, if you are not the winner, you are the loser. To win in F1 costs a lot of money. And, in the end, it’s a driver championship — everybody says, ‘The champion is Vettel and he goes for Red Bull.’ And, in third place, they say, ‘Renault.’ Most people don’t know that Renault is the technical basis of the Red Bull team. And the races are boring…they go around and around. It’s absolutely boring. If you go to Le Mans, it’s exciting from the first to the last hour. 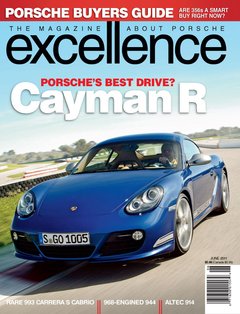