The six-speed and PDK 718 Cayman GT4s face-off on track in Germany. 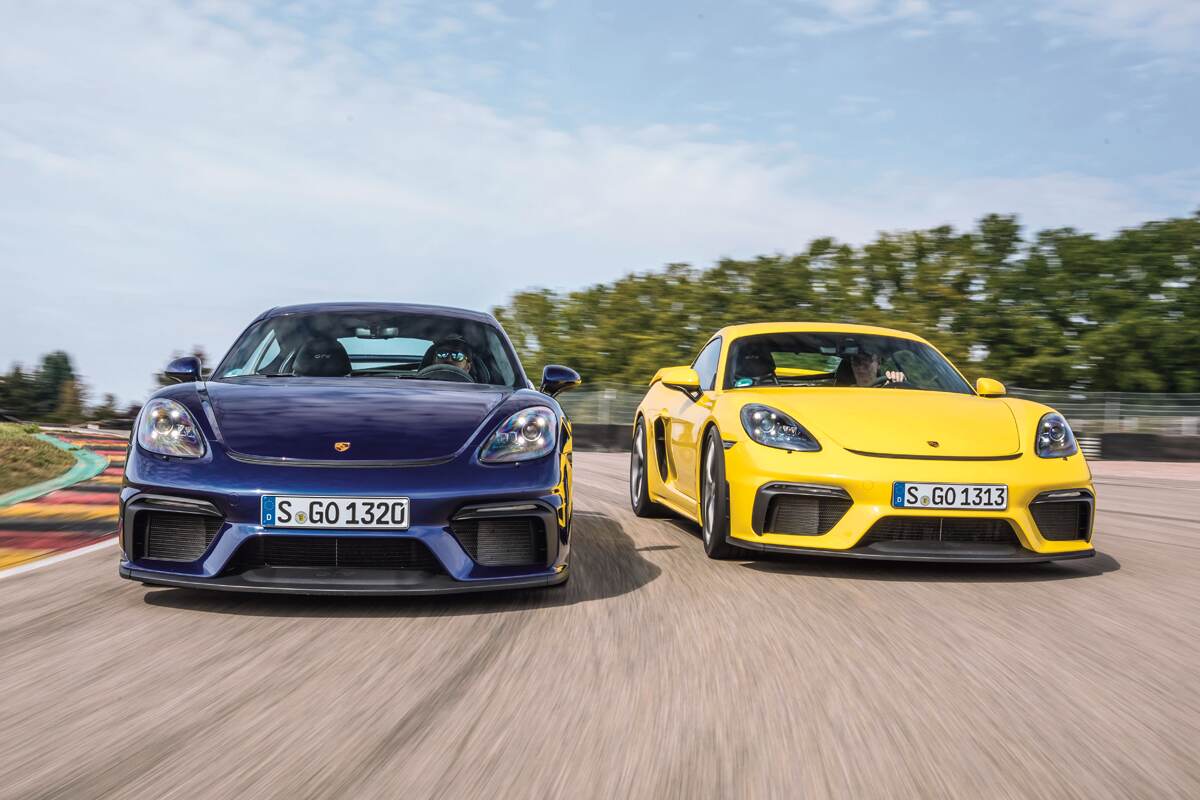 For many fans of our favorite sports cars from Stuttgart, a Porsche isn’t a “real” Porsche unless it has a manual transmission. Since the PDK dual-clutch gearbox was introduced in road-going Porsches for 2009, however, self-shifting transmissions have easily outsold row-it-yourself units by a sizeable margin. And with electric sports cars with no human shifting at all on the horizon, it is only a matter of time before manuals go extinct.

When Porsche first offered the 911 with an automatic gearbox—the Sportomatic, a modified four-speed manual with a vacuum-operated single clutch—in 1967, many purists refused to accept it because the clutch pedal was omitted in the interest of convenience. Comfort over sportiness in a sports car? Madness! As such, the “Sporto” was not a sales success. The same can be said of the traditional torque-converter automatics optionally installed in various Porsche sports cars from the late 1970s through 2008.

The PDK (for Porsche Doppelkupplungsgetriebe, or Porsche Double-Clutch Transmission), on the other hand, delivers the best of both worlds: automatic shifts when you want them and race-car-quick automatic or paddle/shifter-selected shifts when you need them. That’s because it is basically two connected gearboxes shifted by a pair of wet clutches—hence the “dual-clutch” name. Shifting is faster with this setup because all it takes to change gears is one clutch opening while the other closes. Due to market demands and the PDK’s popularity, the 911 and 718 models are the only new Porsches you can still order with manual transmissions. 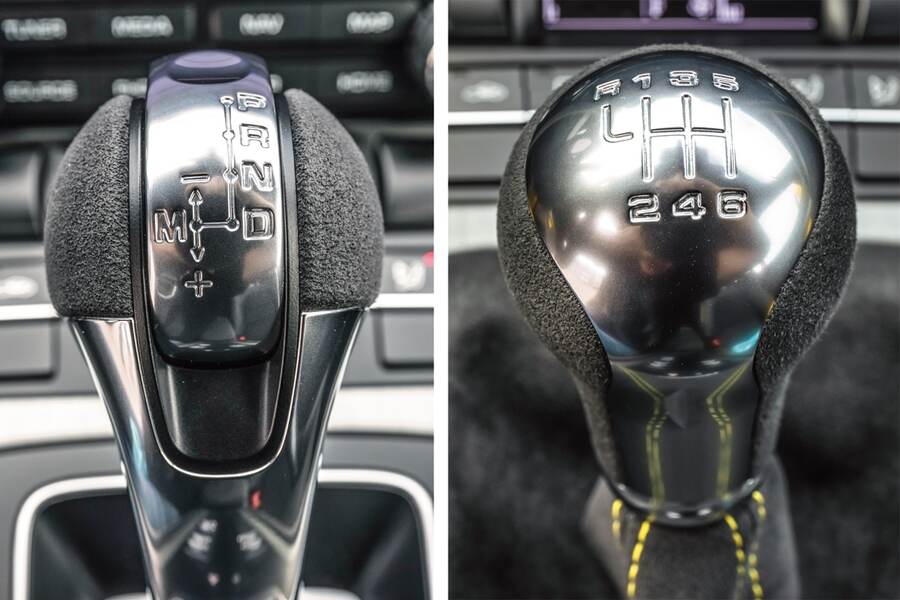 The PDK is great for daily use and fast laps; a six-speed is best for all-out fun!

Today, I’m at the Sachsenring (perhaps best known for hosting MotoGP’s Grand Prix Deutschland) in eastern Germany to find out just how big a performance difference there is these days between the manual and PDK transmissions in a pair of 718 Cayman GT4s. We acquired two identical GT4s with no difference other than their transmissions. Both cars are optioned the same, with $8,000 Porsche Ceramic Composite Brakes (PCCBs), the Club Sport Package (which is unfortunately not available in the U.S. due to regulations), and $5,900 full bucket seats.

The PDK GT4 is 68 lbs heavier than the six-speed model due to its more complex gearbox. Both cars have 414-hp 4.0-liter naturally aspirated flat-six engines. The PDK’s extra weight is somewhat offset by an additional eight pound-feet of torque the PDK cars are tuned to have over the manual ones. As for price, the 718s are the only Porsche models today where the PDK is an extra cost option—$3,210 extra in this case. 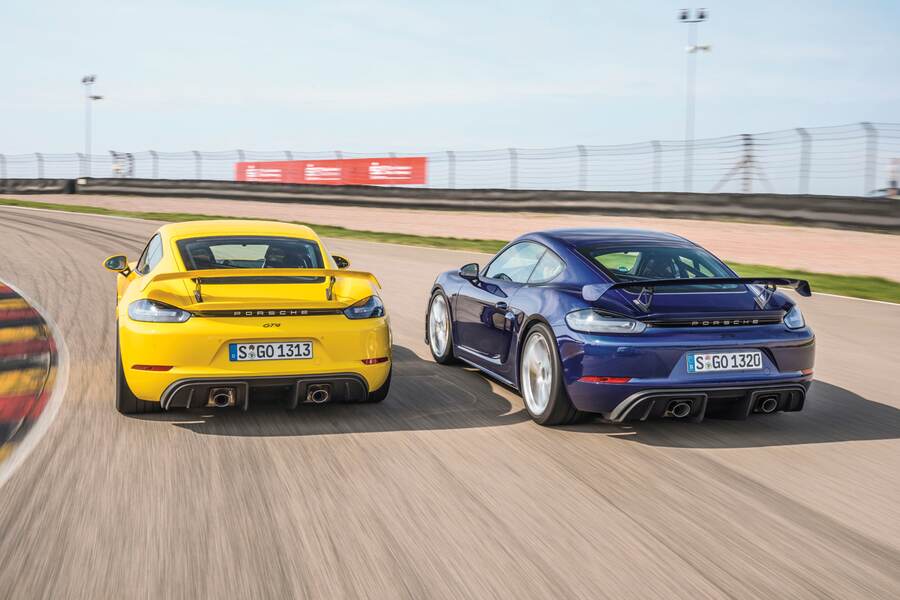 “We deliberately installed a mechanically re-tuned lock with more locking effect on the PDK (30 traction/37 overrun percent in the PDK cars versus 22/27 percent in the six-speed ones). Due to the slightly shorter gear ratios in the first four gears on the PDK, the lock had to be re-tuned to the PDK in terms of its locking degree in order to get more traction and driving stability on the circuit. This mechanical differential lock was available for the PDK from the Cayman GT4 Clubsport racing car and could be taken over directly from motorsport for the road GT.” In theory, that should translate to better on-track performance from the PDK-equipped GT4.

Buckling in and taking to the Sachsenring, I begin by testing the GT4s’ sprinting and everyday abilities.

Using the PDK GT4’s Launch Control feature, I hold the brake pedal, mash the throttle, release the brakes, and rocket forward with impressive oomph. The grip produced by the Michelin Cup 2 ultra-high-performance rubber (245/35ZR-20 front, 295/30ZR-20 back) and traction control is phenomenal, and I sprint from 0-62 mph in 4.0 seconds, 0.1 sec. slower than the factory claim. Doing this same test in the six-speed car is a lot more work. Shifting as quickly as possible, I get the manual car from 0-62 in the claimed 4.4 seconds. Despite the 0.4-second difference in times, the PDK car barely keeps its lead when both cars are run up to 160 mph. 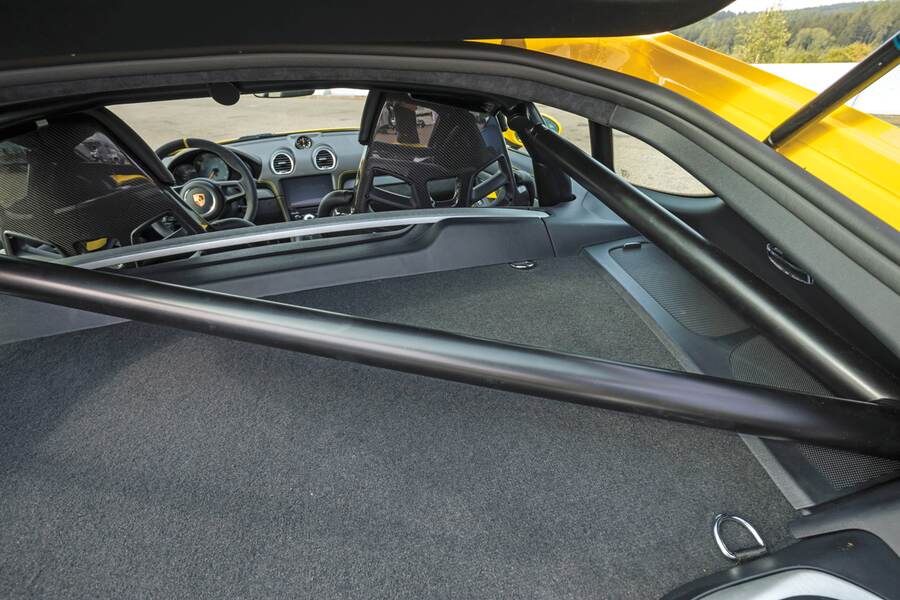 I am pleasantly surprised to find that, although these cars are tuned to produce the sportiest performance of all Caymans, they have a ride that won’t rattle your teeth out and a reasonable interior noise level that won’t damage your hearing. And with a PDK, the GT4 can handle even the most daunting traffic jams with zero worries. Overall, I love the PDK gearbox, though its seventh gear only makes sense to use on the autobahn.

But I quickly learn that it’s better to have that extra gear than not—especially if you plan on driving your GT4 on long trips. In the manual car, sixth gear is subjectively too short, so it feels like there should be a higher gear when you’re driving at high speeds. Sure, the flat-six sounds fantastic when it’s spinning at the upper end of its rev range, but running it at high rpms for an extended period of time makes me desperately want a seventh gear. Then, again, this car was made more for track days than touring.

When driven hard in pursuit of a fast lap time, the PDK GT4 feels more relaxed, and its more aggressively set up limited-slip differential is noticeable. Both cars move around slightly in the slower sections of the course and take some finessing to keep on the preferred line. The PDK car, however, feels smoother and better balanced thanks to its diff settings. 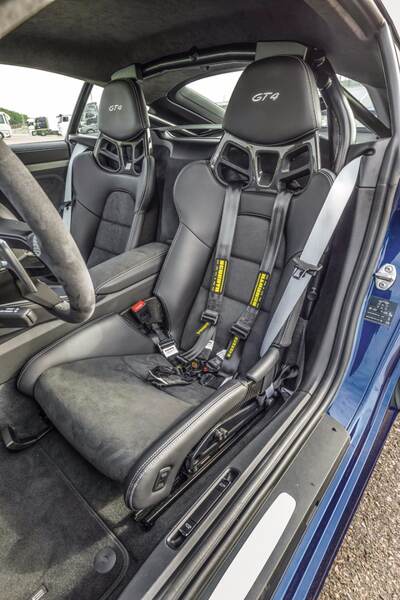 Obviously, with the PDK, you can fully concentrate on the steering wheel work and don’t have to move your right hand away to change gears. And with around 16 gear changes during a lap of this circuit, the faster shift times naturally add up to a lower time. All in all, the PDK’s lap time is 1.2 seconds quicker than its manual brother (1:31.51 vs. 1:32.78).

The quicker pace of the PDK car cannot be ignored. In the end, you buy the self-shift Porsche because it is both faster on a race track and more comfortable to live with day to day. But you pick the six-speed version because it makes driving the new 718 GT4 feel more spectacular. My opinion: Buy manual-equipped Porsches for as long as you are still able to do so. 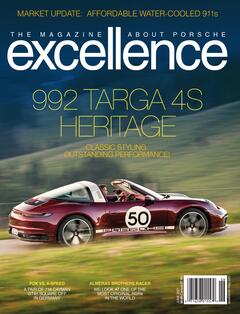