In the driver’s seat of the third-gen Cayenne. 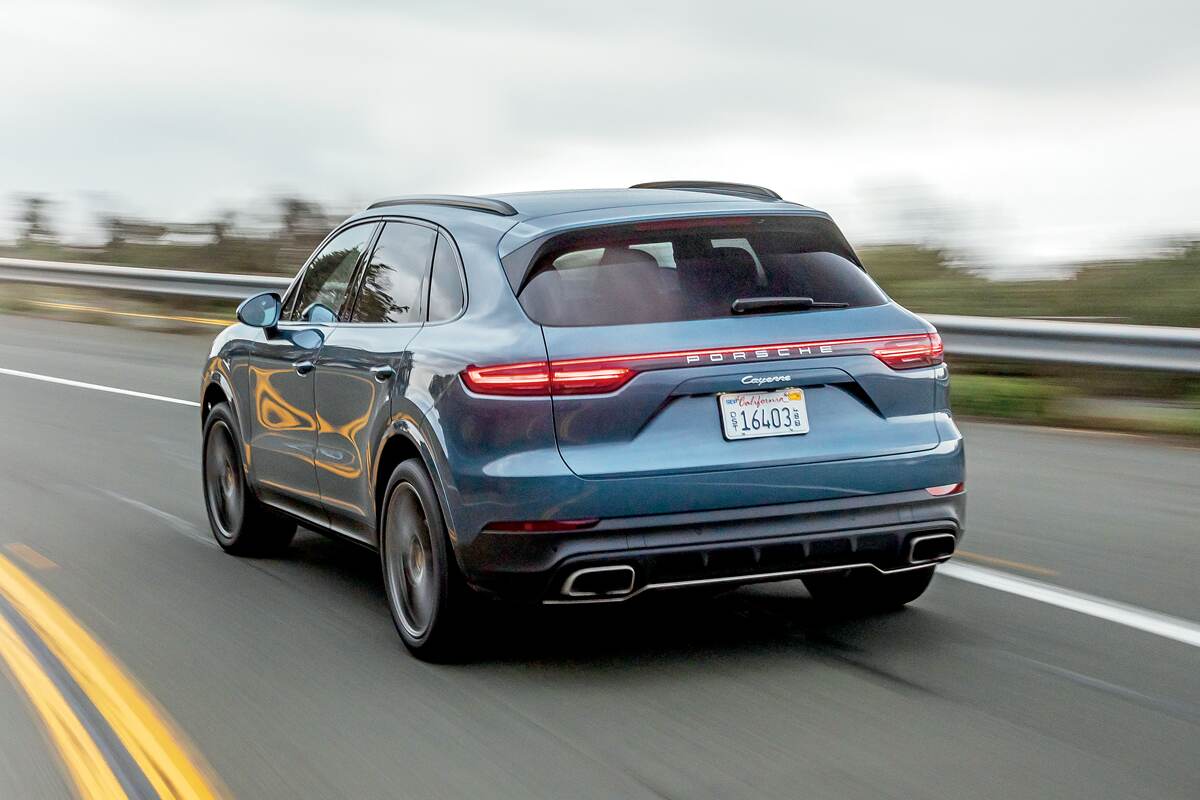 Love it or hate it, the Cayenne is an important product for Porsche. The mid-size luxury SUV was the company’s best selling vehicle from 2003-2014 (save for 2006, when the 911 outsold it). The smaller Macan SUV finally unseated the Cayenne as Porsche’s best seller in 2015. Even so, the Cayenne still sells well: 71,458 were sold in 2018. In comparison, 86,031 new Macans rolled off of showroom floors in that same span of time. Also of note, the Cayenne outsold the 911 by a margin of just over two-to-one and the 718 Boxster/Cayman by nearly three-to-one globally last year.

The new third-gen Cayenne (known internally as the Type 9YA or E3) shares its VW Group MLBevo platform with the Audi Q7, Bentley Bentayga, Lamborghini Urus, and others. Porsche sought to develop its larger sport-ute in areas where customers commonly requested improvements: a lighter curb weight, faster acceleration, enhanced driving dynamics, better fuel economy, and less brake dust. To see how it stacks up against the outgoing Type 92A version, I’m getting behind the wheel of a base (this model’s best-selling trim level) 2019 Cayenne.

At 4,377 pounds, the new Cayenne is by no means a lightweight. Even so, it is 447 lbs lighter than the first-gen 9PA Cayenne, 120 lbs lighter than the previous-gen model, and (somewhat surprisingly) just 278 lbs heavier than the 4,099-lb base 2019 Macan. The weight savings were achieved through more extensive use of aluminum in its body and subframe. Down to the smaller details, parts like a less-hefty lithium-ion polymer starter battery were used instead of more substantial traditional components. 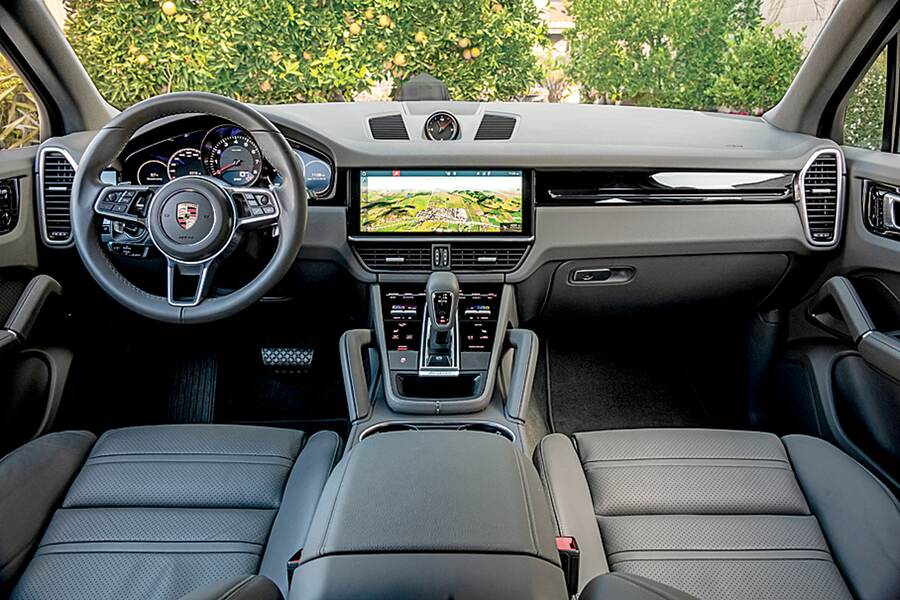 Under the hood, you’ll find a 3.0-liter single-turbo V6 that puts out 335 horsepower and 332 lb-ft of torque. Like previous generation Cayennes, this base engine comes from the VW Group parts bin. Known internally as the VW EA839, the Audi-designed, Gyor, Hungary-built powerplant is shared with the current Audi A6, A7, A8, Q8, and the new,

not-available-in-the-States third-gen Volkswagen Touareg. Slightly different tune variations of this V6 are also available in the current base Panamera and the Audi S4, S5, and SQ5. The new Cayenne is assembled in the same VW plant in Bratislava, Slovakia where the Audi Q7 and Q8, and the Volkswagen Touareg and Up are made.

Power is sent to the ground through a traditional (i.e., non-PDK) automatic eight-speed transmission and a hang-on transfer case with Porsche Traction Management (PTM) that can electronically send 100 percent of available torque to either axle. Porsche still uses a torque-converter-equipped gearbox in the Cayenne since it is better suited for towing and (to a lesser degree) off-roading. 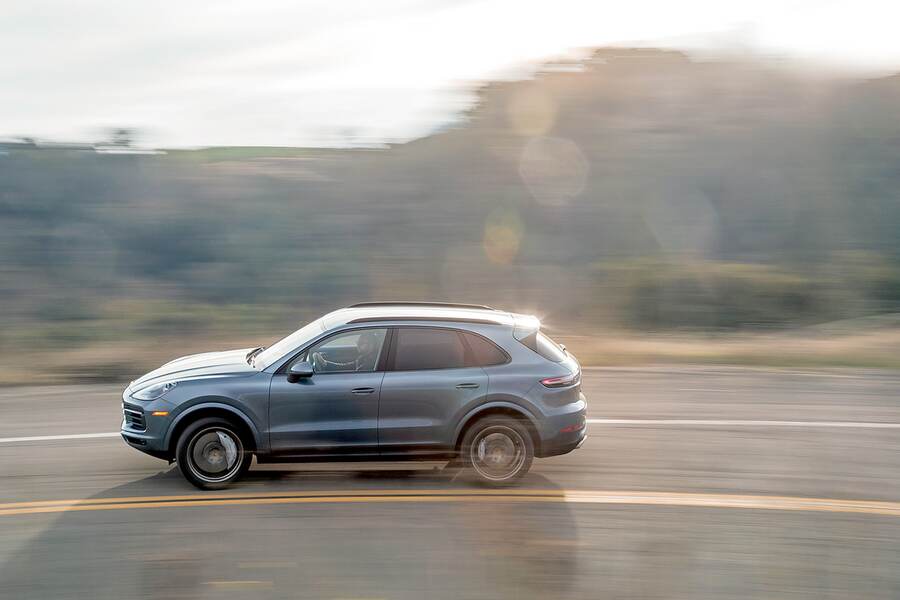 To enhance performance through the corners, Porsche added staggered wheels to all its new Cayenne models and offers rear-axle steering and Porsche Dynamic Chassis Control (PDCC) as options. And despite having 35 more ponies and 37 more lb-ft than the outgoing 300 hp/295 lb-ft base Cayenne, the new entry-level model returns slightly better combined fuel economy (21 mpg vs. 20 mpg).

The increased efficiency was achieved through the use of active aerodynamic flaps in the grille that optimize airflow and a smaller engine displacement. Also, the 3.0 V6 has TFSI (Turbo Fuel Stratified Injection) fuel injection that allows for an 11.2:1 compression ratio and a slightly leaner air/fuel mixture without the consequence of detonation.

To address the complaint about excessive brake dust on previous models, Porsche now offers optional Porsche Surface Coated Brakes (PSCBs) on all its new Cayennes. Consisting of tungsten carbide-coated rotors, the PSCBs have a surface that is ten times harder than gray cast iron. The result is 90 percent less brake dust compared to previous braking setups, better brake response, higher resistance to brake fade, and a mirror-like finish that is practically as eye-catching as a 21-inch set of Porsche alloy wheels. 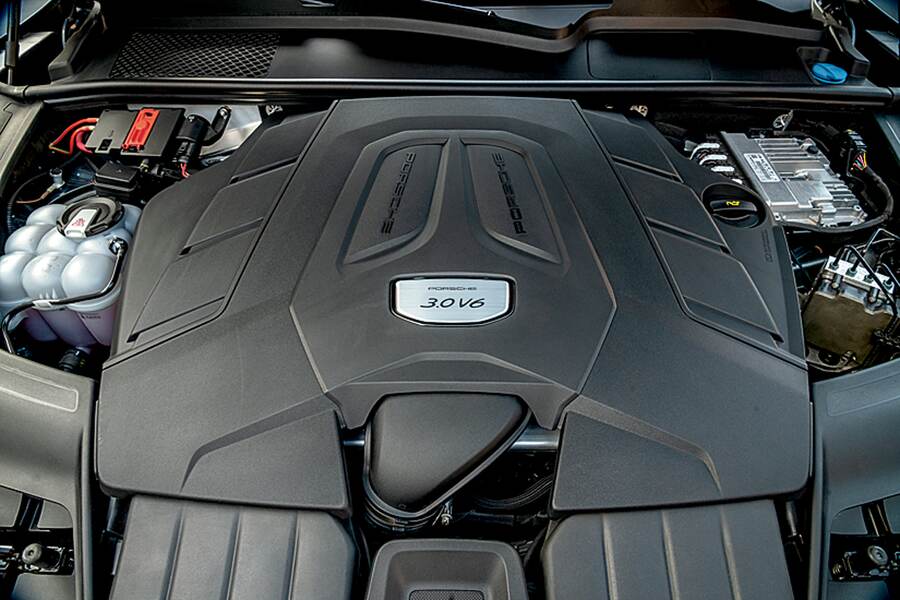 But those are just the basics. Today, we’ll see just what this Biscay Blue Metallic Cayenne test car can do on the backroads and highways of Northern California’s wine country.

Doing a walk around the exterior, I find the Cayenne’s lines to be clean and inoffensive. While its styling is subjectively more attractive than the first-gen version, the third-gen Cayenne looks a lot like the generation it is replacing. That is not a bad thing, as the second-gen Cayennes were actually quite nice-looking. But Porsche’s chief designer, the well-respected Michael Mauer and his crew, may have gone a bit too conservative with the 9YA. Throughout the activities of the day, at least two or three folks who complimented the car also asked questions along the lines of: “Is this the new one or still the old one?”

Inside, the interior quality is impressive. Even in standard form, the new Cayenne’s cabin feels high quality. (The optional full leather interior in a Cayenne I experienced, but didn’t drive as extensively, was even more outstanding.) Our tester is fitted with the base interior but with nicely supportive optional 14-way heated power seats. The 12.3-inch screen in the middle of the dashboard takes a little getting used to, but after a minute or two of fiddling, I have the navigation system set to guide me on a route near the ocean, through a winding section of forest, on the freeway, and finally to the state highways near Napa. 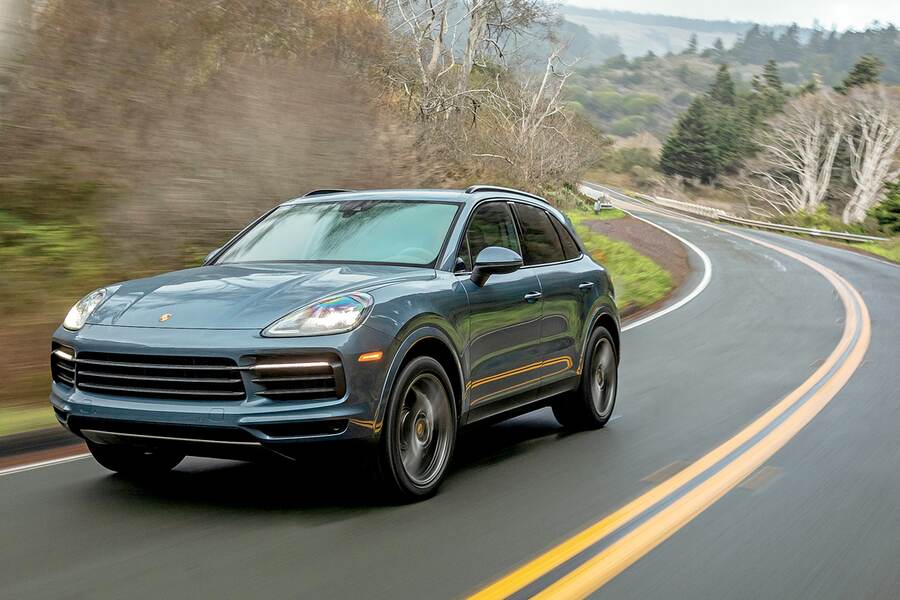 Acceleration provided by the 3.0 is respectable but not extraordinary. Compared to the previous generation’s 3.6, however, this engine feels much stronger from the moment you press the accelerator right up to the 6,500 rpm redline. While Cayenne Turbo owners won’t be impressed, first and second-gen Cayenne S drivers will likely be pleasantly surprised by the new base model’s power.

The eight-speed transmission (which is a 6+2 configuration, with the 152 mph top speed occurring in sixth gear) provides quick shifts either automatically or via the steering-wheel-mounted paddles. Despite being a single-clutch setup, this gearbox doesn’t leave me feeling like I’m waiting long to get the gear I want. Its shifts are not as fast or satisfying as a PDK’s, mind you, but it feels as quick and good as a traditional automatic can get.

Driving at about six or seven-tenths through the two-lane forest section, the Cayenne feels stable and relatively athletic through the curves. Yes, you can certainly feel both the weight and higher center of gravity. With 54.2 percent of the vehicle weight over the front axle, there is some understeer. But it doesn’t push through the corners nearly as much as I anticipated. Porsche has engineered this two-ton SUV to be genuinely enjoyable to drive on twisty stretches of road. And, with the optional rear-axle steering setup, it likely would have been even better. 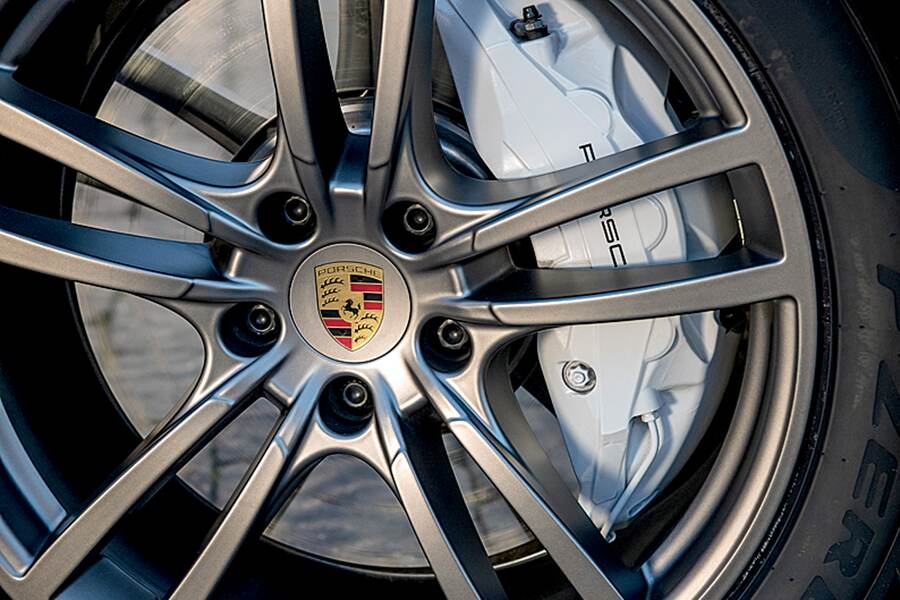 The electromechanical steering system feels more comfort than sport-oriented. That’s not altogether bad, but it doesn’t give me the same feedback I get when I’m driving a 911 or a Cayman. Of course, a typical base Cayenne buyer is likely not interested in the exact same feeling you get from a two-door sports car’s steering system. As it is, the Cayenne is pleasant to drive in normal driving conditions while still giving reasonably good road feel through the steering wheel.

While the PASM electronic active damper system has been available on Porsches for over a decade, it is still not standard on all models. The first 9YA Cayenne I drove was not equipped with PASM. That vehicle’s ride was unsettled and uncomfortable through twisty stretches of roads and even left me feeling queasy during a spirited drive after eating lunch. In contrast, the new Cayenne with PASM is good in all the ways the standard setup was not. The PASM-controlled ride is far more compliant and comfortable and is well worth the extra 2,000 bucks.

Another extra fitted to our test car that is worth giving a serious look is the PSCB brake setup. Measuring a massive 415 mm (16.3 inches) in front and 365 mm (14.4 inches) in back, these are the standard brakes on the new Cayenne Turbo. In our drive, these upgraded stoppers felt quite a bit more capable of bringing the SUV to a more expedient halt compared to the stock, non-coated brakes.

From an aesthetic standpoint, PSCBs have a bright, almost chrome-like finish that looks fantastic. The white-painted calipers (10-piston in front and 4-piston in back) look less appealing, though. Even so, only the also visually appealing, but not quite as nice looking Porsche Ceramic Composite Brakes (PCCBs)—which cost $5,590 more than the PSCBs ($9,080 vs. $3,490)—can outperform the tungsten carbide-coated brakes.

Like many of Porsche’s four and five-door offerings, the Cayenne can be polarizing. On the one hand, it feels very well built and is an absolute delight to drive (when equipped with PASM) in normal driving situations. On the other, it still feels heavy (although this has definitely improved with each generation) and lacks some of the smile-inducing character of its two-door siblings. Unsurprisingly, the new Cayenne is best suited for daily driving with some towing or moderate off-roading excursions.

Compared to its 92A predecessor, the 9YA-gen Cayenne undoubtedly feels lighter, quicker, and less cumbersome. Relative to the original from 2002, the newest Cayenne is light-years more technologically advanced, agile, and visually appealing. While it can never replace Porsche’s sports cars in terms of driving satisfaction, the new Cayenne is without question an excellent everyday car. 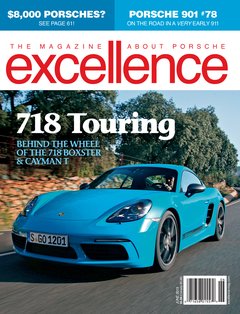