The story of a stunning, award-winning 1989 911 Turbo Cabriolet. 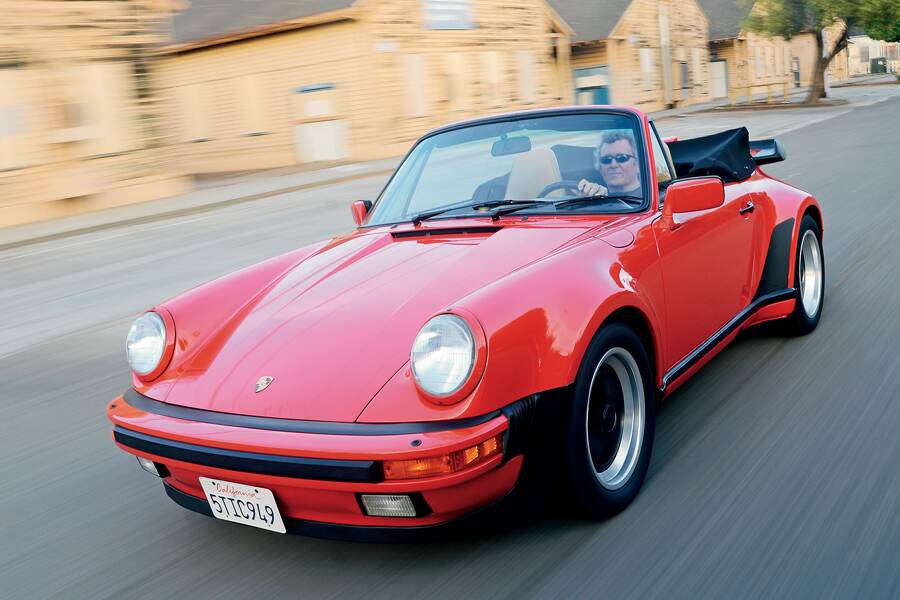 The year 2016 was pretty good for this 1989 Porsche 911 (930) Carrera Turbo Cabriolet. The Guards Red over Parchment soft-top that calls Castro Valley, California home carried off class winner’s trophies at the Carmel Concours on the Avenue, the PCA Werks Reunion, as well as the Hillsborough, Serrano, and Ledson Winery Concours d’Elegance. The car was entered in most of PCA’s Zone 7 Concours events, garnering enough points to win the Class S-4 championship for the 2007-2008 season. In all, says owner Ed Gervasoni, this car has garnered more than 70 first-place, Best of Show, and Peoples’ Choice awards.

Porsche, as we know, introduced its first turbocharged model for the street in 1974 as the Type 930 Turbo Carrera, incorporating technology proven in the factory’s 917 prototype racing program. The 930 was the homologated basis for Porsche’s new turbocharged 934 Group 4 racing car, and it joined the product lineup in 1975. The new 3.0-liter coupe used a single Kühnle, Kopp & Kausch (KKK) exhaust-driven turbine to develop 260 horsepower at 5,500 rpm for Rest-of-World versions and a still-healthy 245 hp for the U.S. market.

Porsche’s engineers decided the engine had a broad-enough powerband to use a four-speed transmission with widely spaced ratios. The new Turbo Carrera, with its outrageous flared fenders, widened quarter panels, and a new “whale tail” rear spoiler, was intended to be the world’s fastest production car, and indeed was capable of a hair less than 160 miles an hour off the showroom floor. The new Turbo Carrera became an instant symbol of German high performance, and colorful Porsche advertising posters soon displaced images of the equally outrageous Lamborghini Countach as well as those of certain Hollywood blondes as garage and bedroom wall décor. 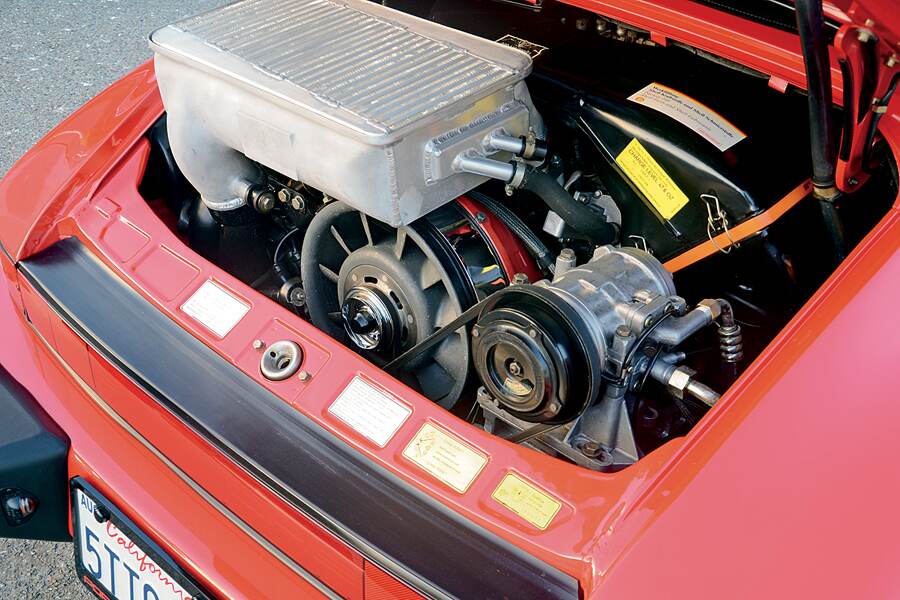 Besides being an immaculate and well-detailed example, Gervasoni’s eye-catching car is a somewhat rare bird; only 600 Carrera Turbo Cabriolets were built for the North American market for the model year 1989 (another 244 were built to Rest-of-World specification). The 1989 Turbo Cabriolet marked the final year of the 930-coded, K-program version. In January of that year, the new L-program Type 964 Carrera 4 with all-wheel-drive began production, and a few months later, the Carrera 2 would appear.

Gervasoni tells us that he had been looking for a clean low-mileage Cab like this for a long time. “An un-restored 930 Turbo Cabriolet is the Porsche I have always wanted to own and drive,” he says, “but it was also the car no one ever wanted to sell.” Today, he says, “Everyone wants to buy it.” In fact, that’s almost precisely the term Porsche used in its factory published 1989 “Fact Book.”

The problem was finding one that met his criteria. Gervasoni kept his eyes peeled for over three years before spotting this one for sale in Excellence in 2006, back when this publication was still running printed classifieds. The seller was located in Georgia. The car looked and sounded like what he had in mind, so after contacting the owner, Terry Whitman, Gervasoni and his wife made some travel plans. 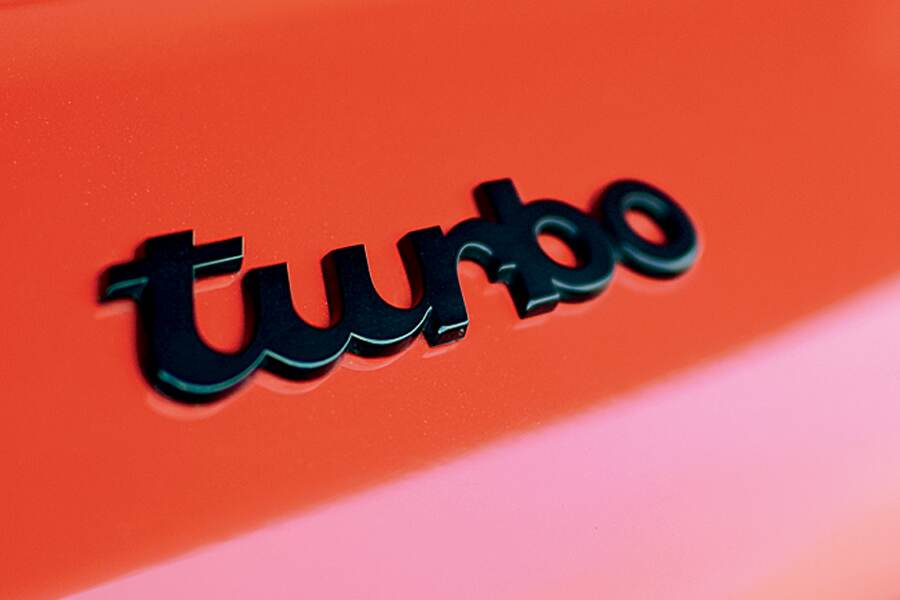 “We flew to Atlanta and then drove to Lawrenceville, where Terry lives,” says Gervasoni. “He had the car sitting in the driveway. It was a beautiful sunny Georgia morning, and the car was just glistening.” Whitman walked Gervasoni and his wife around the car, explaining that it needed a new top and some detailing. Other than those items, he says, the car was in mint condition. The three-year search was over.

“I knew it was the car I had been looking for,” says Gervasoni. Then it was time for a test drive. “We took the car out on a very flat and long highway where we just flew down the asphalt like a missile,” he continues. “The first time I drove it my hands were shaking when I got out of the car! I had never driven a Turbo; this car was very fast. It just kept going and going. It was spectacular. I took my wife for a spin around the neighborhood, and she said this is awesome, adding that our 1986 Cabriolet is fast, but this is a monster!”

They took the car back to Whitman’s house and agreed on a purchase price. After a deal was struck, it was time to get the Turbo Cab home. “I didn’t want to drive the car back to California as it only had 24,000 miles on, so we hired a service to deliver the car,” says Gervasoni. “They couldn’t get to the car for a week, and it would take another week to reach our home in California. So with the deal completed, we flew home and waited for our new Porsche to arrive.” 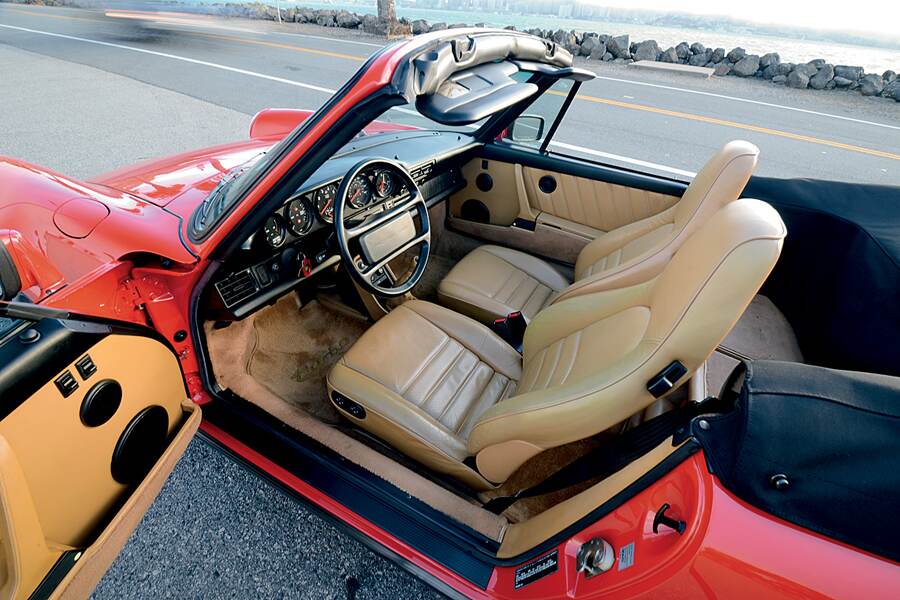 That much torque was deemed too much for the four-speed manual fitted to all the earlier series of 930 Turbos, so Porsche’s engineers opted for the new and beefier G50. This transaxle featured a reinforced differential case, larger ring and pinion, limited-slip differential, and a reinforced clutch.

The Turbo boasted those trademark fender flares, air inlets, “whale tail” rear spoiler, and wide, matte-finished Fuchs alloy wheels—16 x 8-inch in front and 16 × 9 in back—behind which lurked huge power-assisted disc brakes with drilled rotors about a foot in diameter. At a bit less than 3,000 lbs, the Turbo Cabriolet scaled about eight percent more than a normally-aspirated folding-top 911, with that additional 220 lbs evenly split between the front and rear wheels. 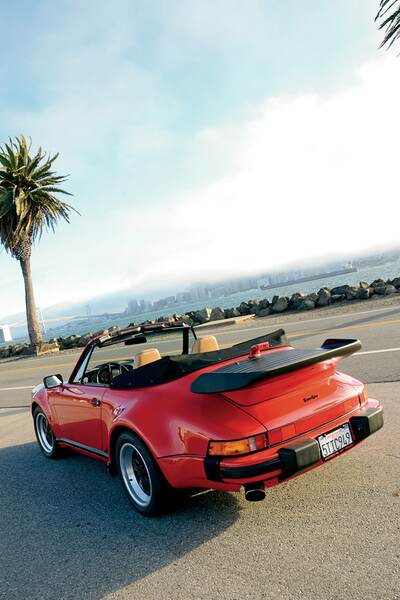 The Turbo Cabriolet was Porsche’s top-of-the-line ride for 1989, says Gervasoni—what factory sales materials unabashedly called Porsche’s “flagship” model—and it was accordingly the most expensive. For those whose discretionary income wasn’t up to an $85,060 base sticker price ($172,055 in current U.S. dollars), there was always the less-costly M491 option “Turbo-Look” in Cab and coupe form, which offered the “look” but not the urge. Only the DOT-mandated high-center-mounted “death-ray” brake lamp peering above the Cab’s rear spoiler broke the spell.

Gervasoni has been able to unearth much of the Turbo’s history. With the assistance of a friend employed at a Porsche dealer, he learned that chassis number WPOEB0938KS070107 was delivered new to Porsche Barrington in Illinois and sold to its first owner on March 20, 1989. Unfortunately, the purchaser’s name was never entered in the warranty book, so that part of the story remains a mystery. 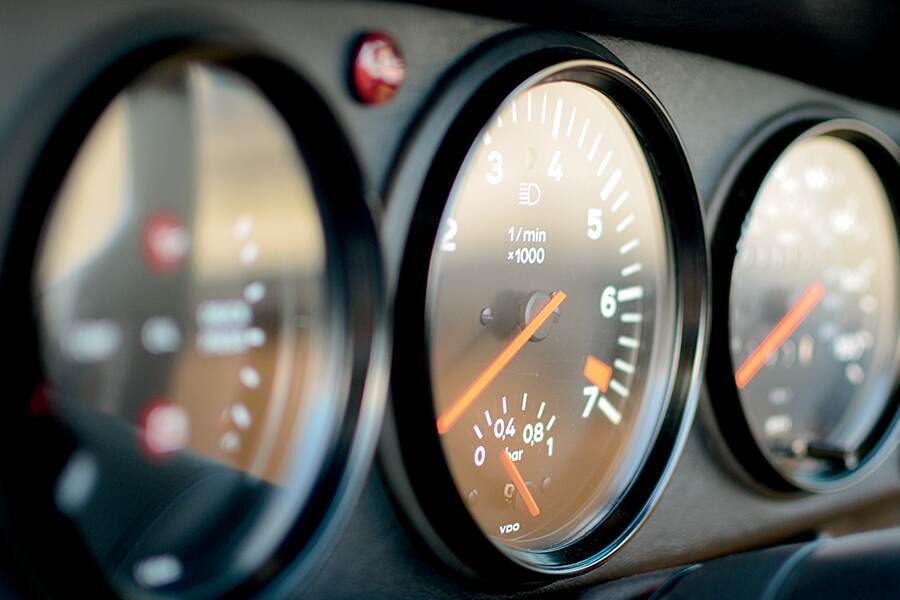 The car’s build sheet discloses that as delivered, the car was fitted with engine number 68K00166 and transaxle number 2K00613. It was ordered in the always-popular combination of Guards Red with a black canvas top (G1V9) and trimmed in Parchment and Black leather with tan stitching (QH). The list of factory options included a raised steering wheel hub, tonneau cover, limited-slip differential, a shortened shift lever, stone guard appliqués, an AM/FM stereo system with CD player, an amplifier system, “model delete” on the engine cover, and more.

The first owner eventually sold the car to Ooley & Blackburn, a Carmel, Indiana import dealer near Indianapolis that has long specialized in 930s and newer Turbos, especially the G50-equipped 1989 model. Steve Ooley tells us that he has sought them out because of their uniqueness and desirability. Many have passed through his hands-including this one.

Terry Whitman was in the market for such a car and when he learned that this example was available; he wrote the necessary check and drove the Cabriolet back to his home near Atlanta. The car’s next stop was a visit to Franz Blam Racing in Tucker, Georgia, for a complete once-over. Very few issues were noted, and Whitman compiled a list of things he wanted to do to make the Turbo quicker.

Those tasks included having Black Forest Racing in Denver, North Carolina, replace the original KKK 3LDZ turbocharger with a new and larger K27, along with a larger Garrett intercooler and a throaty Billy Boat stainless-steel sport exhaust that let everyone in the vicinity know he was coming their way. Those upgrades pushed the engine’s output to about 380 horses.

Whitman says the car became a bit of a garage queen; the press of business meant the car was rarely driven over the next decade, adding barely 15,000 miles to what had already been accumulated. Fortunately, Whitman had retained all the stock parts, and that helped seal the deal when he put it up for sale in Excellence.

It was a long and nerve-wracking week for the Gervasonis. Like kids waiting for Santa Claus, Ed and his wife stayed close to their telephone, awaiting the call from the car shipping service. 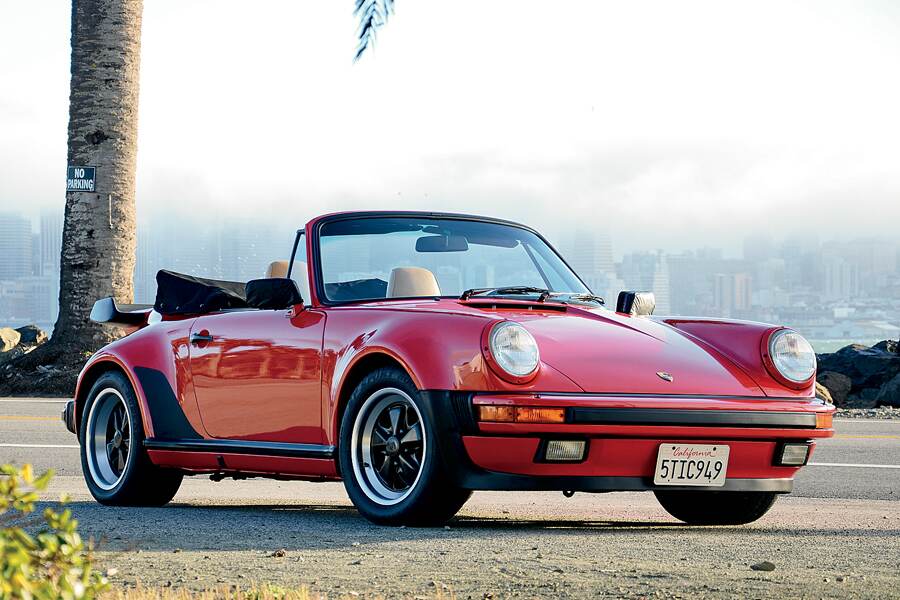 “Finally, the drivers called and said they would be there in four hours,” recalls Ed. “Soon enough the long trailer truck came up the street and parked in front of our house. The driver gave us the papers and began to unload the car. There was also a beautiful 996 coupe going to San Francisco. That car came out first and was sitting in front of the house. By now all the neighbors are outside staring. Then the sexy red Turbo Cabriolet comes out, and my neighbors are saying, ‘You got two more Porsches?’”

With the Turbo on the ground, the 996 was reloaded, and the transporter departed. Next, Ed and a neighbor pulled the license plates off his red 1986 Carrera Cabriolet and hung them on the Turbo. Then it was time to see how the new arrival liked breathing California air.

“My neighbor had never been in a Porsche, let alone a Turbo. We quickly got on the freeway and looked for an open space.” Gervasoni admits that they blasted up to 80 mph and then briefly to triple digits. “My neighbor’s eyes were large as pool balls. He was holding on to the door handles!” After about 45 minutes they brought the car home and tried to calm down. “Our hands were shaking from the rush of adrenaline. It was spectacular! I have never driven a car that small with that much power.”

Now showing a mere 38,000 original miles on the odometer, this Turbo Cab has primarily become a show car. That said, you should know that it’s no longer a garage queen; Gervasoni and his wife drive the car to and from their San Francisco Bay Area home to whichever club event or concours that beckons, and there are many. “It has never been trailered,” he says. “The drive is the best part, and getting there is the adventure. Cars are not jewelry, they are made to be driven, and we drive spiritedly every time we get behind the wheel.”

Concours judges always ask if it’s a ‘Turbo Look,’” says Gervasoni. “Most have never seen a real 1989 Turbo Cab. In all the years I have shown this car I have never seen another like it in competition and only one sitting a parking lot.”

Indeed, when Gervasoni displayed his Turbo Cab at the 2016 Werks Reunion in Monterey, it was almost constantly surrounded by interested onlookers and PCA members snapping pictures, and the odds are that most, if not all of them, had never seen one before. The next time you see a 1989 Carrera Cabriolet with fender flares and a whale tail, don’t assume that it’s a ‘Turbo-Look.’ Check out the instrument panel—if there’s a boost gauge at the bottom of the tachometer, you’ll know it’s likely the real deal.

“We have registered for many of the large concours this year again and hope to do well, and as always we look forward to seeing all the great people that have now become dear friends,” says Gervasoni. He’s taken a few more steps to make his car even more beguiling to show judges, including sending those beautiful Fuchs wheels off to Harvey Weidman for a refinishing. If the past is any indicator, Gervasoni’s trophy shelf will likely gain even more eye candy this season. 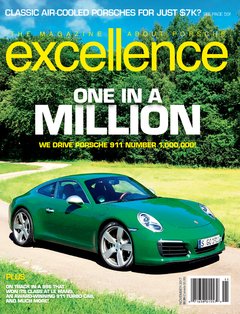