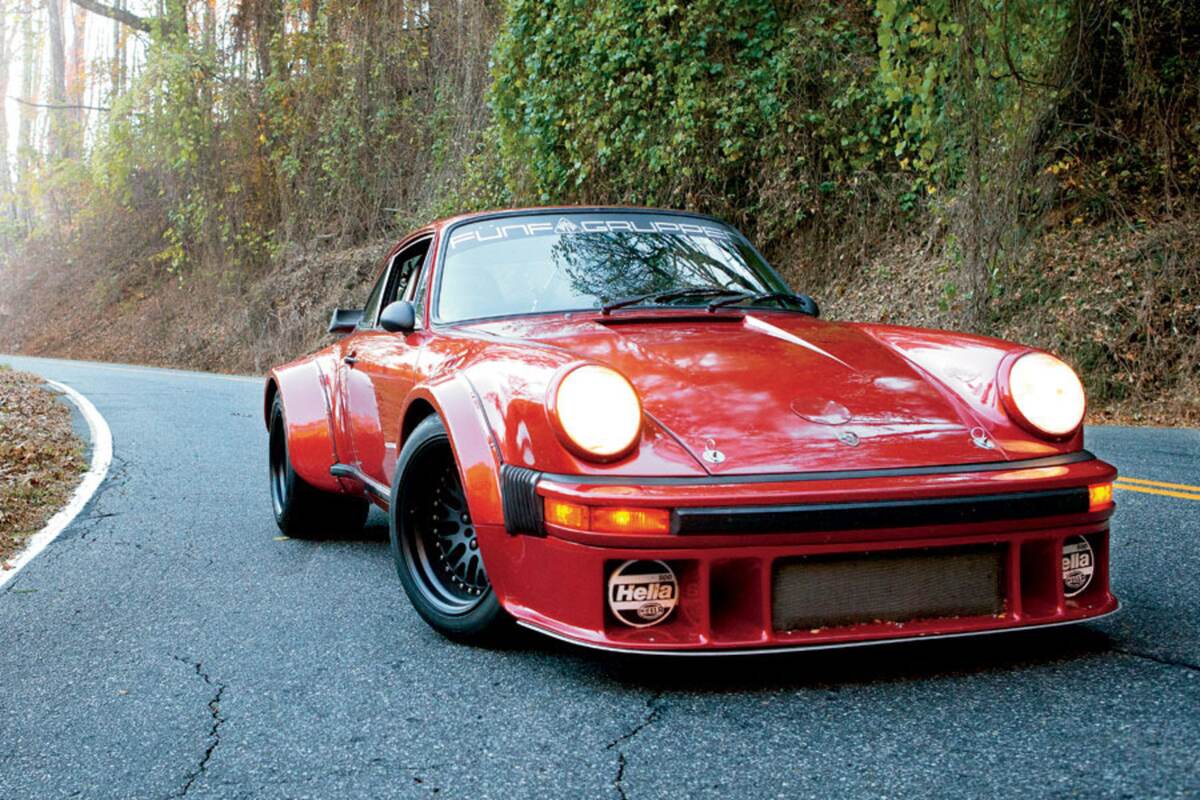 SITTING DECIDEDLY UPRIGHT, WITH BOTH SHOULDER BLADES firmly planted in the tall racing Recaro and both hands grasping the period Momo wheel, the view forward is paradoxically feminine yet masculine. This 1979 930’s familiar, voluptuously sensual pontoon fenders are flanked by madly flared wheel arches, leaving you with glimpses of Group 4 domination.

“When I get into a 911 after driving a Porsche racing car, it doesn’t feel like I’m in a completely different car,” said the late Al Holbert, who certainly knew his Porsche race cars and eventually took over running Porsche’s motorsports activities in North America. After stepping out of the very real 934-002 and into the cockpit of this 934 replica, I know what he meant. But then, this car’s inspiration gives it an advantage, because the 934 remains Porsche’s most street-like race car to date.

After my left hand summons the ignition, a cacophonous rumble penetrates the cabin. As the big, turbocharged flat six settles into a brutal idle lumpified by the long overlap of 934 cams, the undulations of each stroke of each cylinder pulsate the chassis. It’s such an experience that, before setting off, I open the door, get out, and walk to the back of the car. 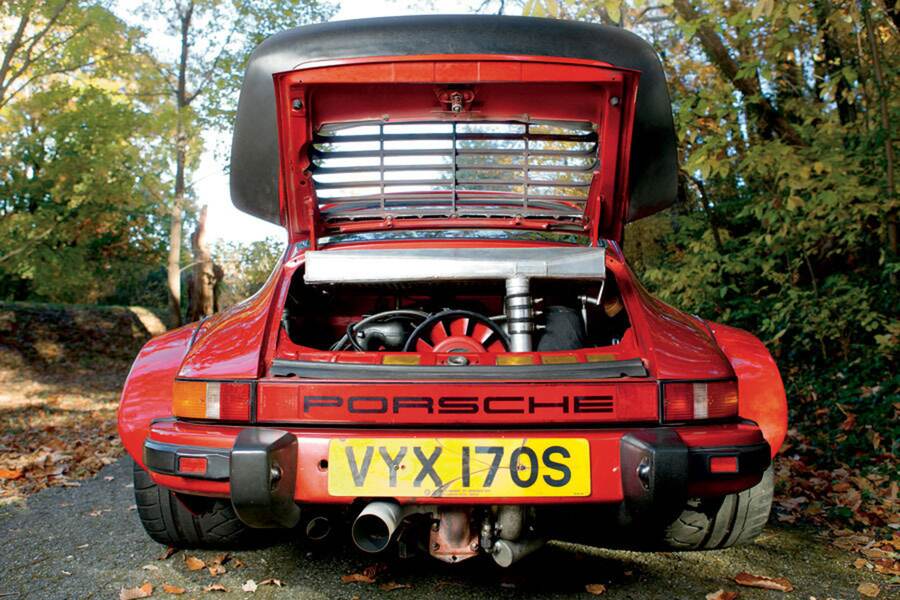 Arriving at the Zork tube — all eight or so inches of pipe coming directly off of the turbocharger — I am greeted by an audacious BURBETTY BRAPETTY burbleburble BRAPBRAPBRAP!, with an under­lying turbo whistle only a heavenly lump-acious cam and mighty short exhaust combo can hope to achieve. My best attempts at stifling schoolgirl giggles prove feeble as I begin chuckling audibly, knowing full well what I’m about to do next.

Back in the driver’s seat, with door shut and belts cinched, my left foot engages the Tilton clutch deftly as my right foot throttle-modulates its way up and through the rough and tumble cams. Regretfully, such technique is a lost art in modern “sports cars” with dual-mass this and dual-clutch 27-speed that. So much of the charm, character, and persona has been lost in modern cars. With a single-mass, lightweight flywheel and four forward speeds, sterilization isn’t an issue in this Porsche.

Every sensual curve, every near-pornographic engine note demonstrates this 930/934’s Modus Operandi. More money may buy more power accompanied by the Bloatus Flopperandi new cars guarantee in abundance, but no thanks. As the big, black VDO’s orange tachometer needle sweeps through 3500 rpm in first gear, boost builds. By 4000, it rushes to the low 7000s before a shift is demanded. Acceleration in second gear feels just as strong. Into third, my right foot buried, I spy “Just Not Right” on the speedometer. A few frayed synapses suggest lifting might be smart. 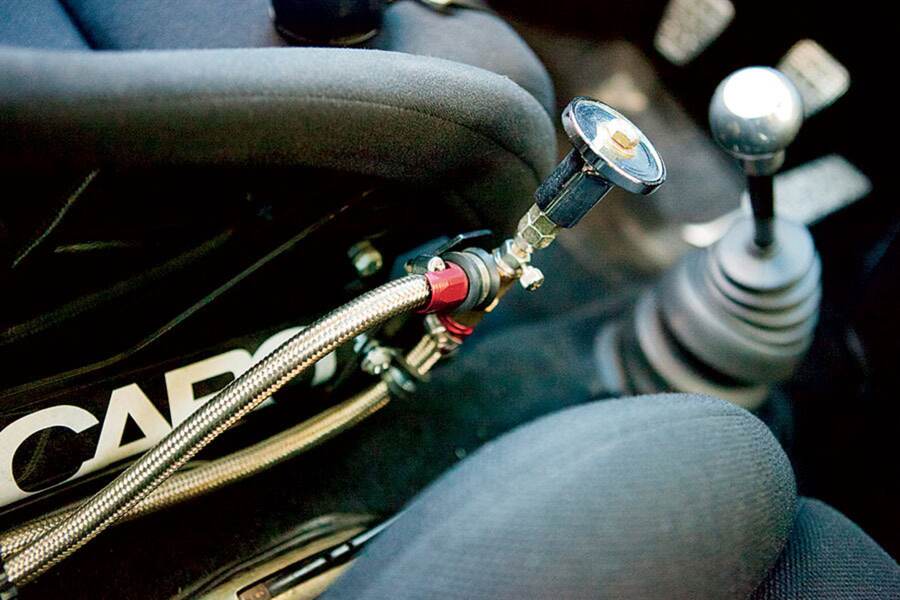 While triple-digit stability is enhanced by a D-I-Y chin spoiler and checked by the 930 calipers filled with Ferodo DS2500 pads, sensibility wins out and engine braking ensues. The best part about lifting? The raucous decelerative anarchy. Poppetty POP pop POPPING is followed by bahahahahaaa, the sound of three-foot flames spewn at unlucky tailgaters. Flames! Deceleration proves nearly as entertaining as acceleration and offers another shameless opportunity to exploit the full range of the tachometer via the full range of the archaic four-speed transmission.

Porsche would do well to bottle some of this car’s fury and reintroduce it. After all, it’s a fury born of its own history.

Homologated in 1976 via the street-legal 930 Turbo Carrera, Porsche’s 1976–77 934 was something of an oddity among race cars. The full-race 934 offered carpeting, fully trimmed doors, power windows, and heavy, U.S.-legal 5-mph bum­pers. Just 41 examples were produced by Porsche, with “roughly 400” otherwise manufactured over two years. 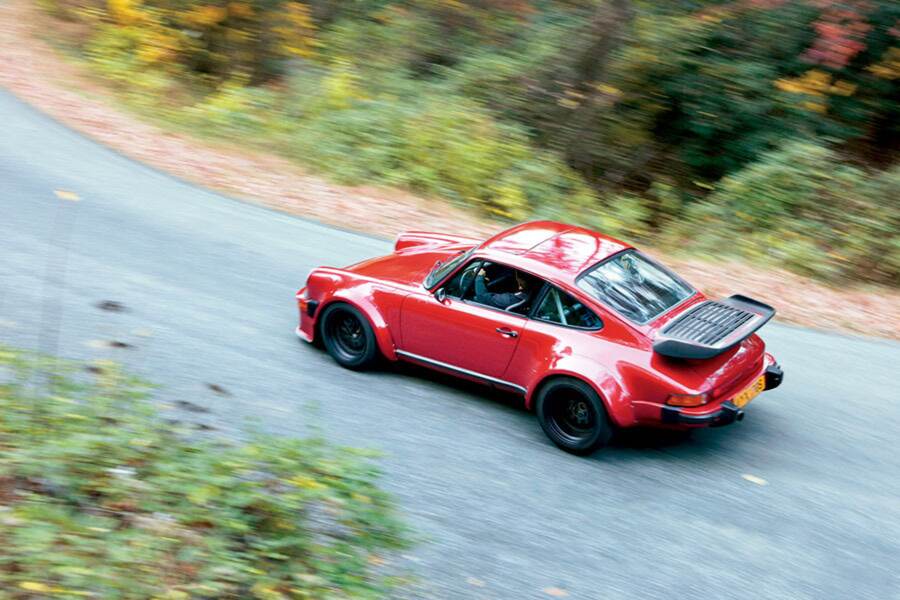 Bolt-on fender flares rather comedically inflated the car’s width to almost seven feet. At 78.3 inches, the 934 had the ultimate eff ue stance. Its water-to-air intercooler was fed by radiators housed in the front aprons, and their added 45 pounds earned their keep by dropping charge-air temperatures from 300° F to 120° F. Driven by a belt, shafts, and bevel gears, the engine’s cooling fan was mounted horizontally; clearly, Porsche felt the enhanced cylinder cooling was worth the greater parasitic loss. The standard 930 torsion-bar-sprung suspension was augmented with coil springs, monoball links, and cockpit-adjustable front and rear anti-roll bars.

All said, the 934 — also known as the Turbo RSR — lapped the Nürburgring Nordschleife 15 seconds faster than the normally-aspirated Carrera RSR 3.0. Not that it was an easy drive. Derek Bell called the 934 “a nasty little beast.” Others were less charitable. Revered in diehard Porsche circles as one of the last road racers to retain its road-going roots, the 934’s shocking yet superlative styling and supreme hammerability leaves minds agape. 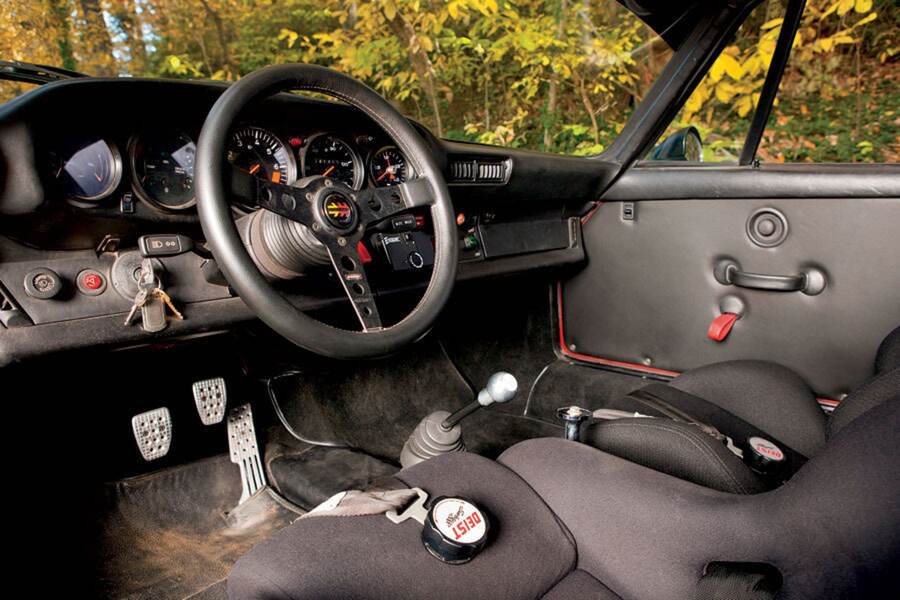 Recreating such factory idols provides an attainable outlet to the nostalgic, as a real factory 934 will run you into something approaching seven figures — assuming you can find one. North Carolina physician Justin Broughton’s affinity for motorsport classics has left him surrounded by vintage Italian motorcycles and assorted purpose-built Por­sches. His 930 was born in 1979 in special-order Kiln Red, which he says may be limited to a handful of cars.

Broughton had other ideas for his 930, and they didn’t include standard specifications. Tony Miller of Noir Tech in Whittier, California rebuilt the 3.3-liter flat six up with flame-ringed 935 pistons on shot-peened and nitrited connecting rods. 934 cam­shafts and 934 headers were installed, as were titanium valve springs and retainers. The latter reside in single-plug, ported, and polished Carrera 3.2 cylinder heads.

A Carrera 3.2 intake manifold, an Aero­motive fuel-pressure regulator, and a TEC GT electronic fuel-injection system handle induction duties, with crank-triggered ignition firing Electromotive coil packs. In the spirit of old-school, lag-tastic turbos, an IKS/Garrett hybrid turbocharger was fitted, its custom-machined housing aimed at a KKK 33 equivalent. The turbo­charger feeds a massive Protomotive intercooler, and boost is regulated by a cockpit-adjustable knob and TiAL wastegate. 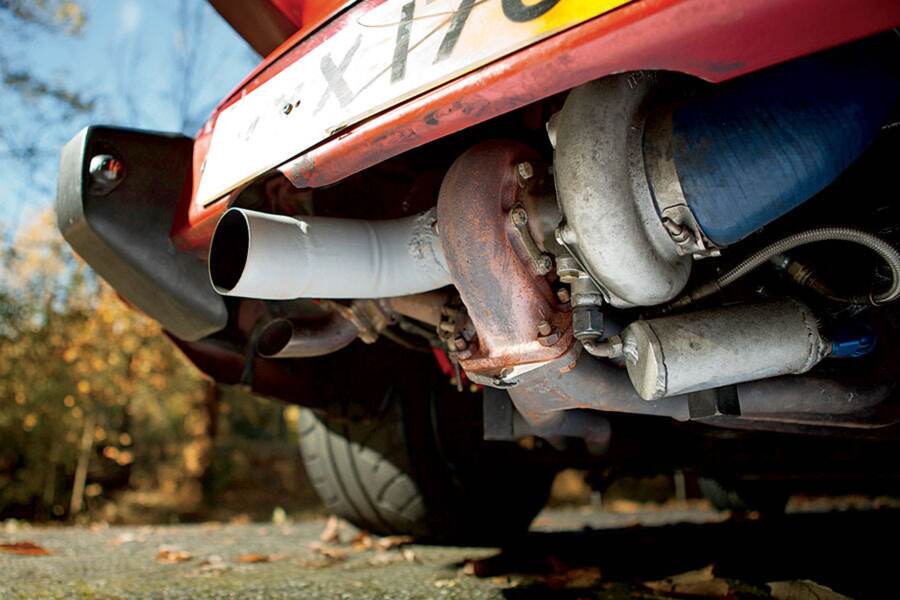 The sum, says Broughton, is 535 rear-wheel horsepower and 490 rear-wheel lb-ft of torque at 1.0 bar of boost pressure. That’s transferred to the original 930 four-speed transmission through a Tilton racing clutch before it’s sent to the rear wheels via a limited-slip differential.

With 100-octane gasoline and a skewed sense of sanity, Broughton says he can dial the in-cockpit boost controller — which he affectionately calls “Dial-a-Death” — safely to 1.2 bar for north of 600 rear-wheel horsepower. Stock front torsion bars and coil-over rear suspension help control the movements of the 17×10 and 17×13 Fikse wheels, which are shod in 245/35R17 front tires and 335/30R17 rears.

Brough­ton uses his 930/934 hard and often. He’s driven it cross country but, living in North Carolina, he runs the car more frequently on the infamous Tail of the Dragon and surrounding switchbacks. His view: The car represents all that made Porsche’s Turbos so amazingly great in the first place — a single-minded pursuit of speed with a take-no-prisoners, unholy rawness born of a win-at-all-costs attitude and built around those incredulous, turbo­charged flat sixes. 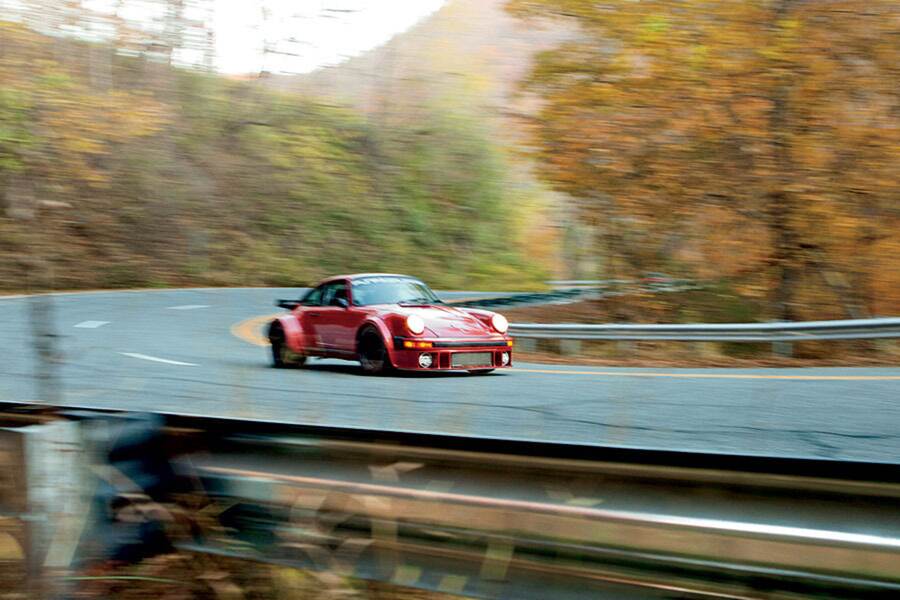 To him, his creation is sheer Porsche sensory-overload, and he confesses to feeling a bit like Derek Bell at Le Mans every time he drives the car to work. Which takes us back to Al Holbert again, who once proclaimed, “With the Turbo, it always seems like I am out of control in the damn thing. That’s the only way it goes fast. Slide it into a corner, get it pointed in the direction you want to go — which lets you get on the power much earlier.”

Flooring the gas pedal pre-apex to account for turbo lag and to initiate throttle steer, I’m slingshotted off each apex of Carolina Motorsports Park with a thunderous surge as cars behind us are still braking. I’d like to think Holbert would be smiling. Entering the paddock, an indelible Cheshire grin is inscribed across my face, which feels as though it’s been distorted by accelerative, decelerative, and cornering g.

Those abnormalities will subside, but the effect on my soul is perspective-altering. Devoid of sensor this and driver-aid that, this old Porsche is a sledgehammer-shaped tool that reminds you that this is the way it is supposed to be… 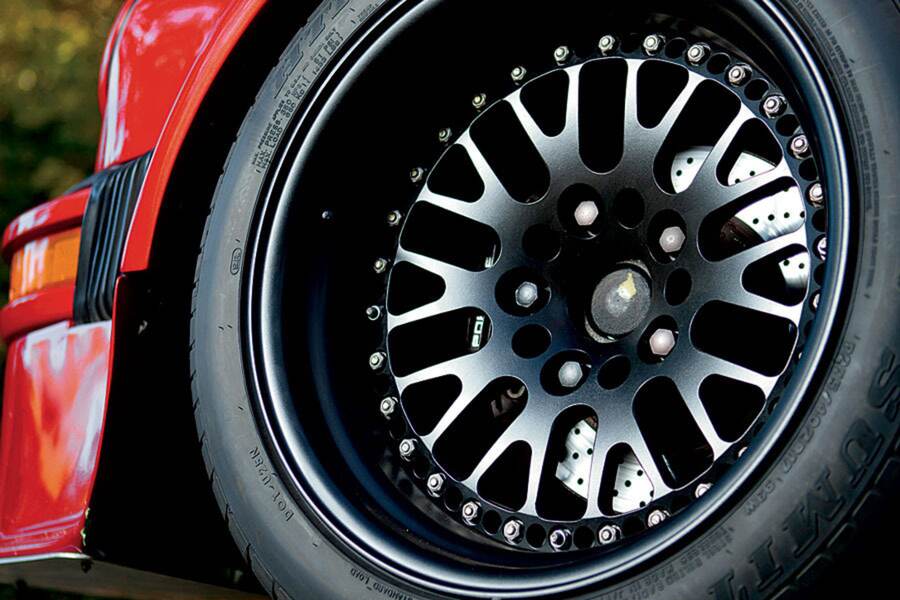 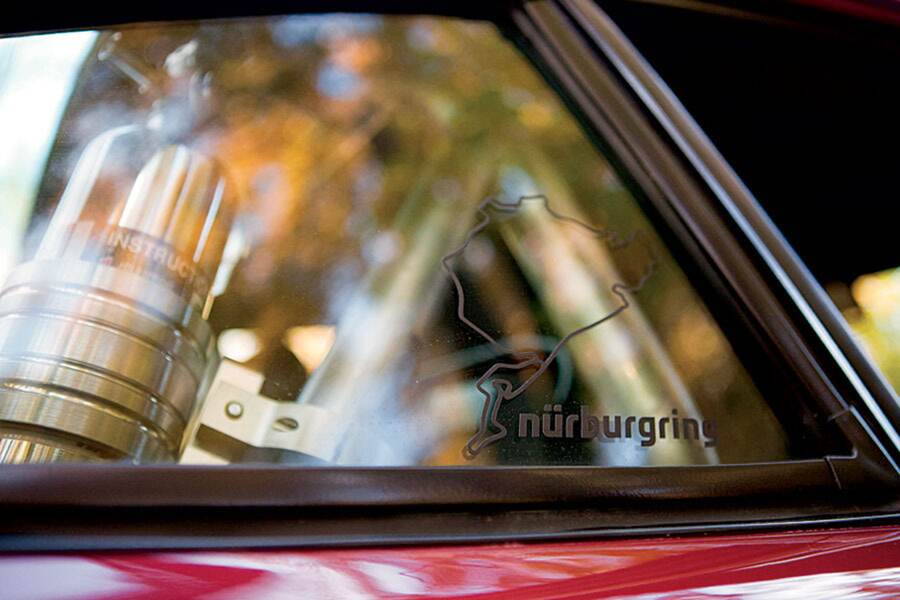 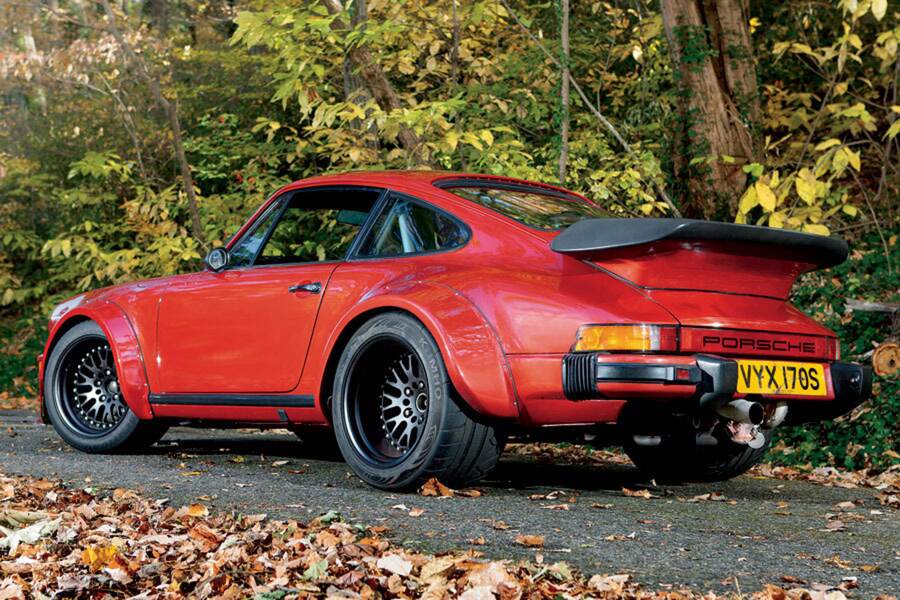 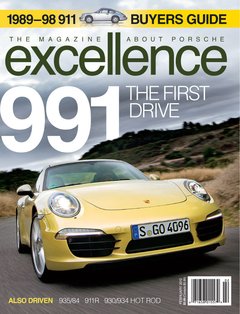