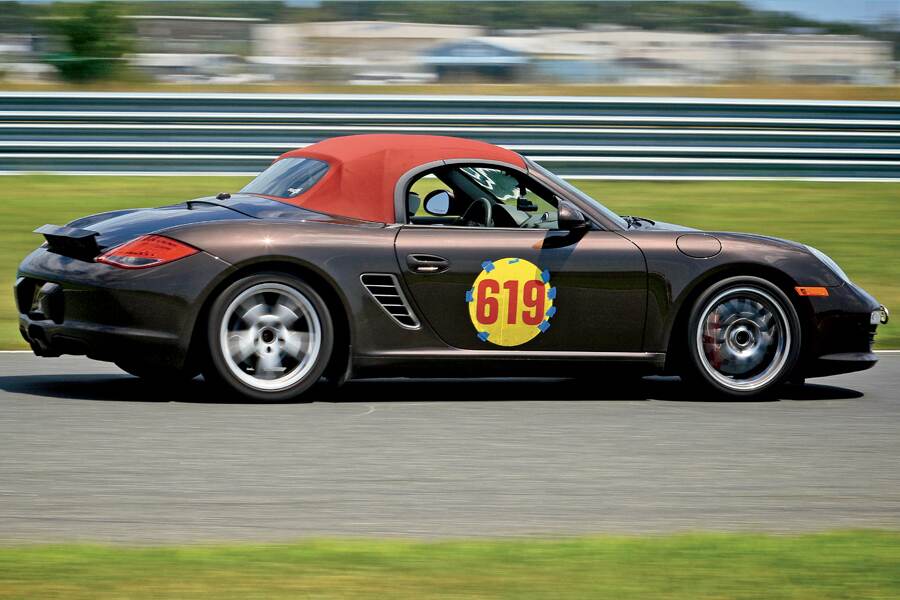 Fred Pack, the owner of our featured 2011 Boxster (987.2) S, popped onto my radar when the internet first exploded in popularity. He contacted me out of the blue to say I ought to do a story about an online user group called “Porschephiles.” (To help you understand what this was, think of it as an embryonic Rennlist.) He has been a friend ever since, and when he calls to talk cars, I listen.

Recently, Pack wanted to speak about his “drive to the track” Boxster S. That surprised me since I last heard he bought a 2004 911 (996) GT3 for both PCA Drivers’ Ed events and

daily use. Curious, and sensing another good tale, we met at the New Jersey Motorsports Park in Millville, New Jersey where he was participating in a track-day gathering. 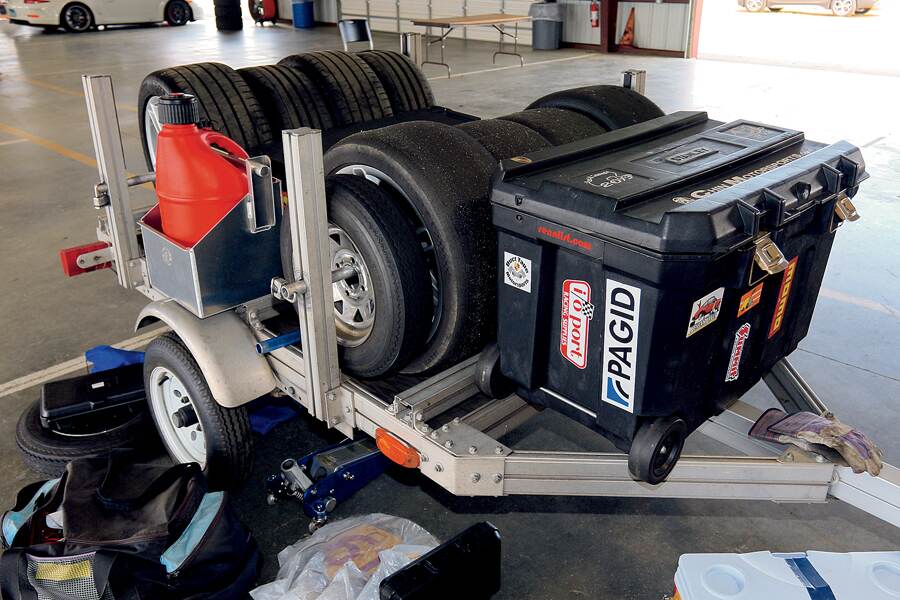 “I wanted to simplify my track hobby and have only one car at a time,” Pack explained as we sat next to the race course. “[Plus] I don’t have room at my house for my wife’s sedan, a track car, an SUV and a trailer.” His goal was to make his daily driver also serve as his track-day Porsche. He’s so committed that he tows a trailer behind his Porsche to carry his racing wheels and tires. He’s owned seven other Porsches—two of them Boxsters. And while he always had dedicated track cars in the past, he occasionally got to drive his modern mid-engine marvels on the track.

“I remember enjoying those cars immensely, so I decided to try the Boxster layout again,” Pack continued. In 2011, he searched Porsche’s online dealer stock for a car that matched what he had in mind. It had to be a 310-hp 987.2-gen Boxster S, as he wanted the additional 55 horsepower it had over the 255-hp base model. He also required that it have a six-speed manual transmission, Sport seats (so he could fit a six-point racing harness), Porsche Active Suspension Management (PASM) suspension,

the Sport Chrono Package, and a limited-slip differential. The pursuit of a suitable model online came up empty. Undeterred, Pack ordered a brand-new Boxster S finished in Macadamia Metallic paint, with a Black interior, and a Red convertible top. 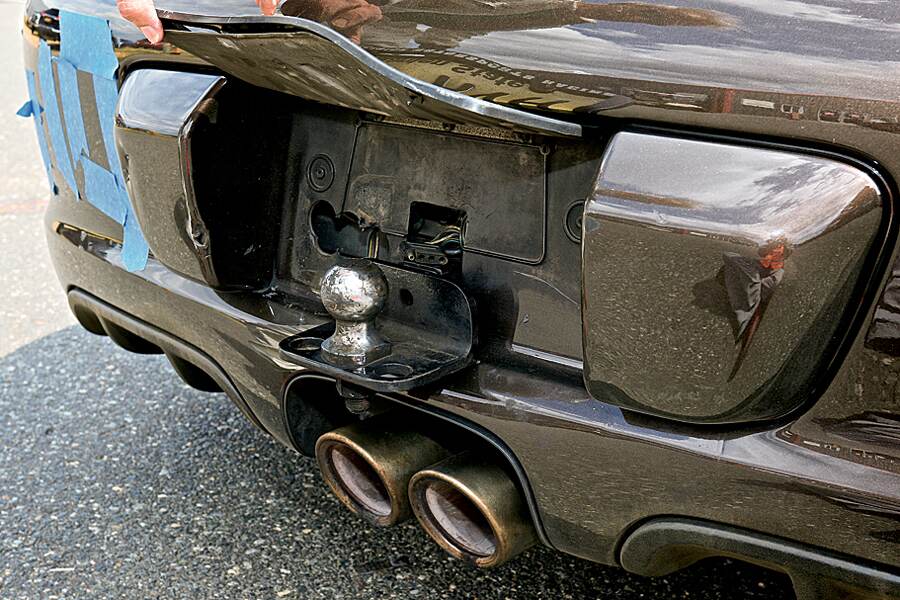 You would think that a “bespoke” Porsche that still smells new would be just about all you could want, but you would be wrong! Delivered in May 2011, Pack immediately took his new ride to Precision Motorsports (PMR) in Long Valley, New Jersey. He had them install stiffer suspension springs and anti-roll bars, and 997 GT3 lower front control arms that helped produce more negative camber for better on-track handling. PMR also installed racing harnesses, heavier duty brake pads, and higher boiling point brake fluid. For wheels and tires, Pack used the stock 18-inch Boxster S rims wrapped in Michelin Super Sports rubber on the street. For the track, he chose 18-inch BBS alloys with Hoosier R7 245s in front and 275s in back.

“With that setup, I was ready for the track,” Pack smiled. He used his new Boxster S in about ten track events per season and described it as, “Reliable, fun on the street and fast!” However, a hint of trouble came when the car’s engine overheated when the temperature outside exceeded 100 degrees Fahrenheit. PMR fixed that issue by installing a third radiator from a 987 Boxster with a PDK transmission. While the car was in the shop, Will DiGiovanni, the owner of PMR, also recommended the installation of a limited-slip diff from OS Giken to help with braking stability. A GT3 master cylinder and stiffer engine mounts got bolted on at the same time, and Pack reported immediate improvements.

“The car continued to be fantastic for both street and track,” Pack recalled, “although the ride quality is questionable for the street.” He confessed that because of its track-oriented ride, his wife pretty much refuses to go anywhere in it. The “average” track-day guy would be more than content with Pack’s setup by this point. But, as you may have already guessed, Pack is anything but average. While he could keep up with anyone in the corners, his car just didn’t have enough power. 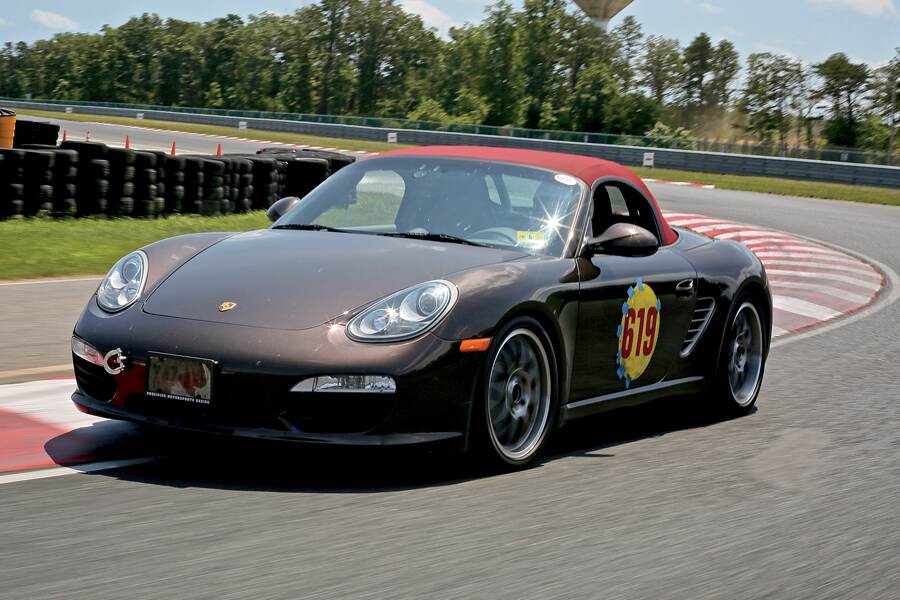 “I was getting frustrated at the track as more powerful cars zoomed by me on the straights,” he explained. And then the light bulb went off. “At the end of the 2014 track season, a thought popped into my head—upgrade the engine to get more power!” Once again, Pack checked in with DiGiovanni, and together they saw three options. Option one: add a supercharger. Option two: bore the engine’s cylinders out. And option three: install a larger engine from a 911.

Pack’s practical nature, never too far below the track-day guy surface, influenced his decision-making process. Besides his “need for speed”—something he felt his Boxster lacked enough of—his other requirements were that the car had to stay “reliable and street-able.”

“The Boxster is my regular means of transportation,” explained Pack. “I can’t [afford to] have it out of service getting repaired.” Another consideration was the distances he drives for track events. His local PCA Region holds events that could be 300 or more miles away. “Since I don’t have a [tow car] and a vehicle trailer,” he continued, “if it ever conks out at a track event, I’ll be stranded.” For that reason, DiGiovanni immediately nixed adding a supercharger. 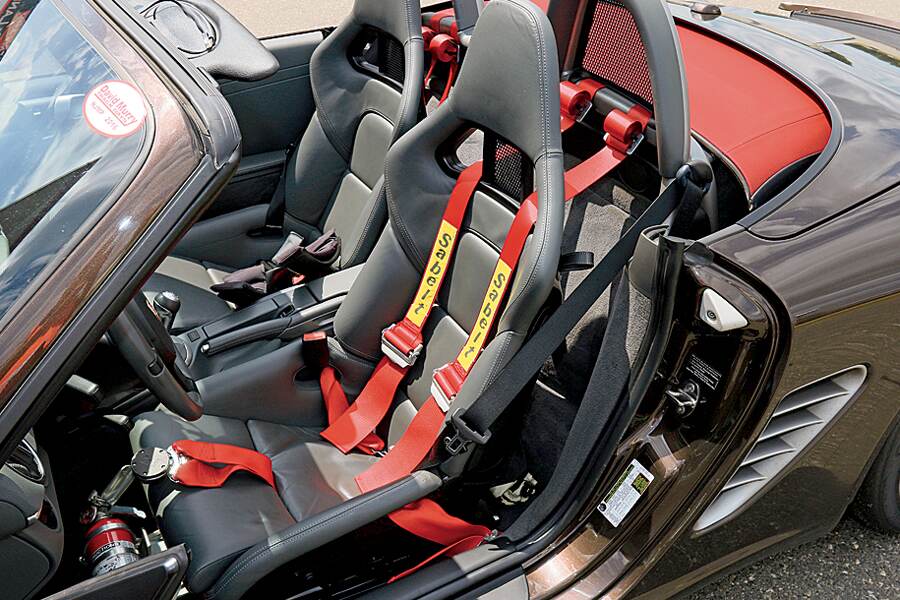 Pack was, however, leaning toward enlarging the displacement until he estimated the cost for machine work. But when the work was priced out, that option was discarded quickly. Pack admits that he was never really that enamored with the idea of machining out the cylinders. “It seemed to me that reliability might suffer,” he said. After crunching the numbers, Pack and DiGiovanni both agreed that the machine shop cost would be too high for the benefits gained.

“It seemed to me that the best approach would be to buy a relatively new 911 engine and stuff it into the [Boxster] chassis,” continued Pack. “Then most of the money would be going into the purchase of the jewel of a great Porsche engine.” DiGiovanni analyzed the labor involved, put pencil to paper and presented the numbers. Together, the two agreed that an engine swap would be the best approach. 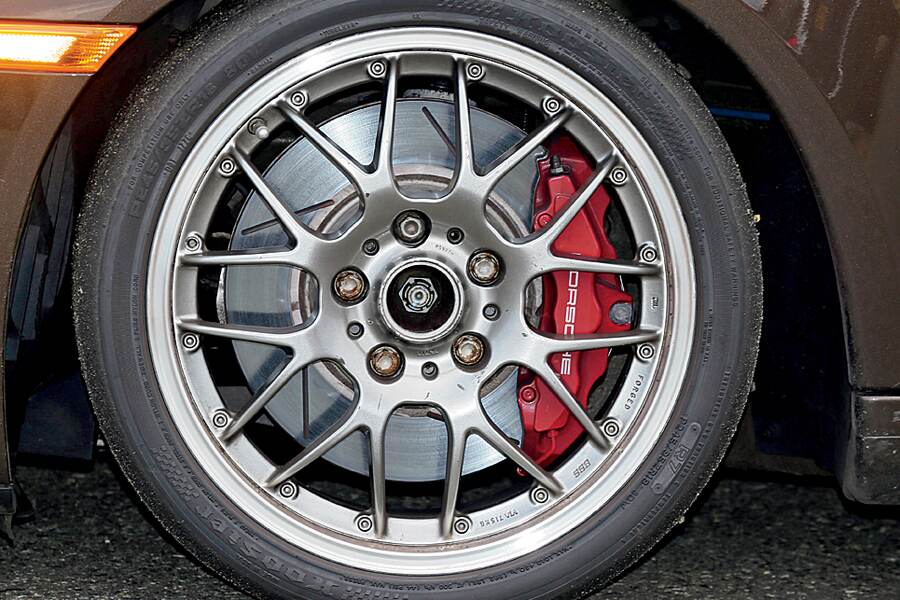 “It was better than an S motor,” Pack said. DiGiovanni agreed, “Other than a Turbo or GT3, it’s the best motor you can get.” More important, DiGiovanni reassured Pack that this choice of powerplant would still pass the New Jersey state emissions inspection, which was critical since the hopped-up Boxster was going to be driven regularly on the street.

Before a deal was done, the 3.8-liter six’s engine control unit (ECU) was shipped separately to PMR for a Vehicle Analysis Log (VAL) test to check for any over-revs. The report back was clean, so Pack bit the bullet and wrote a rather large check to a reputable internet engine broker. But while the engine itself was sound, its delivery was not.

“When the engine arrived at PMR,” explained Pack, “the shipping company dropped the motor and cracked the case at the upper attachment point on the rear engine mount.” The engine didn’t leak, but the mounting point needed for the mid-engine installation was broken off. Without that attachment point, the 3.8 wasn’t usable. 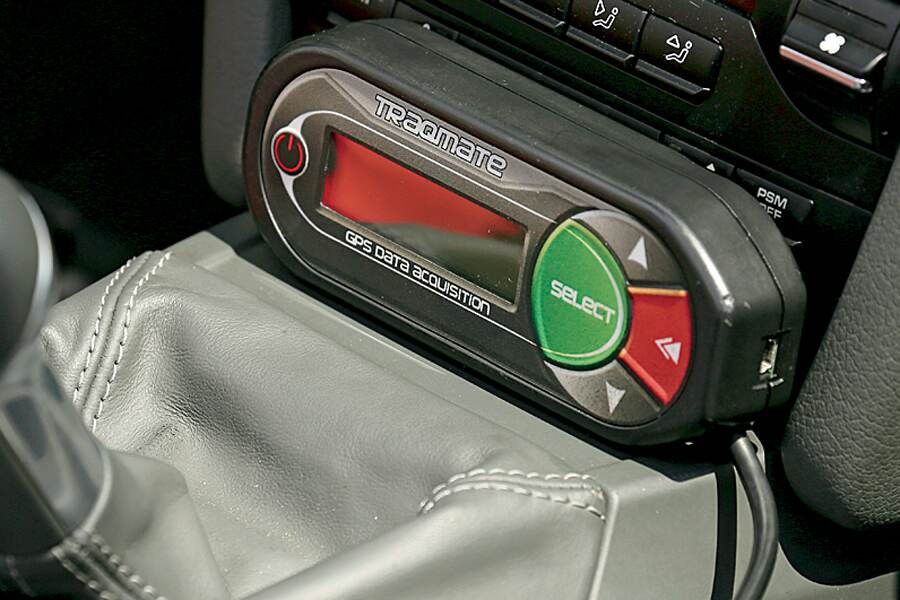 To be able to repair the fracture, the engine had to be disassembled to isolate the damaged area. Then, the broken piece was TIG welded back in place. Fortunately, the shipment was insured, so Pack’s out-of-pocket expenses wouldn’t be an issue. DiGiovanni subcontracted the welding to an expert, but he had an aluminum content analysis done on the case to ascertain and source the perfect welding/filler rod—an important step to ensure a lasting repair.

While they were waiting for the insurance issues to be sorted, PMR looked inside the spark plug holes with a bore scope and found a problem common to direct fuel injection (DFI) engines: carbon buildup. Fortunately, it’s an issue today’s better shops can handle. Using a tool that blasts the carbon with walnut shells without damaging the engine solved this problem. However, since the engine was coming apart for the shipping damage repair, they did a few things known to improve performance.

“Will pulled off the cylinder heads and carefully ported and polished them,” said Pack. “Then they did a ‘competition’ valve job (i.e., triple angle) as icing on the cake.” While they were at it, they made the judgment to add a few “go faster” parts that PMR knows are worth the money. Seeking to increase the GTS engine’s breathing capacity, PMR installed an IPD plenum. Its design improves intake airflow and distributes it more evenly using a merge collector. DiGiovanni says that their tests show measurable power gains throughout the horsepower and torque curves. Next, they coupled this change with an 82-mm GT3 throttle body. 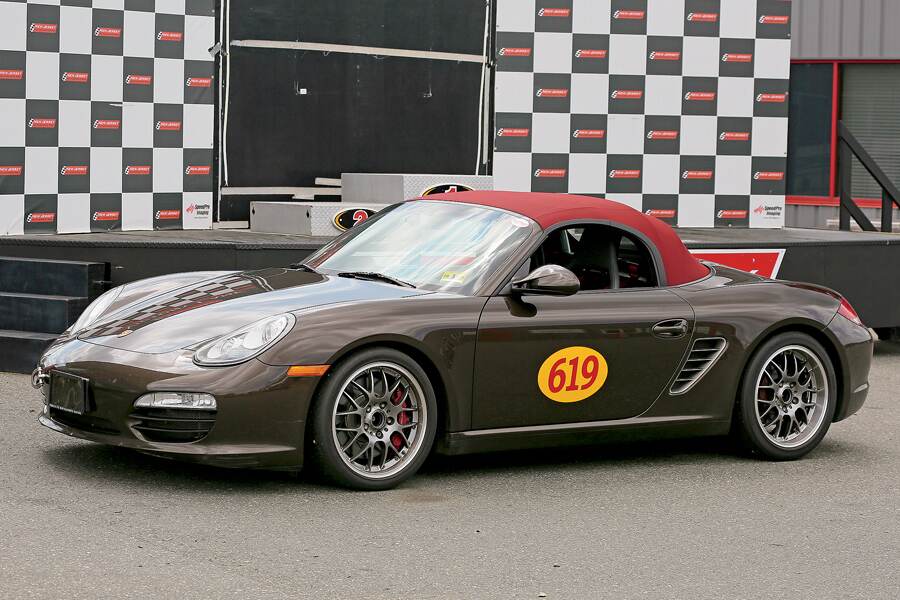 Another trick was to “flash” the engine management system (EMS) to achieve that elusive extra horsepower and torque. DiGiovanni said, “We flashed the ECU with Evo Sport Tune.” The “flash” cost varies on complexity, but DiGiovanni stressed that it’s an essential step whenever swapping out engine parts. With the engine mount repair sorted, it was time to sort out the final details.

To handle the additional power, PMR added a Sachs Racing clutch and pressure plate. They did not install a lightened flywheel because it’s incompatible with the EMS and can cause the engine to go into “Limp Home” mode. Proactively, because of the miles driven, they replaced both axle shaft assemblies. There were only a few teething problems. For example, the power steering system overheated and two hoses failed. So, the broken lines were swapped out for new ones, and a cooler and an under-driven power steering pulley were bolted on to prevent the failure from occurring again.

Pack said that because of the higher track speeds, he was overloading the brakes. The solution was a set of 996 GT3 front brake calipers and slotted disks. Once again, DiGiovanni and trusted fabricators came through adding, “Special caliper adapters were machined so we could utilize stock 987 front uprights.” 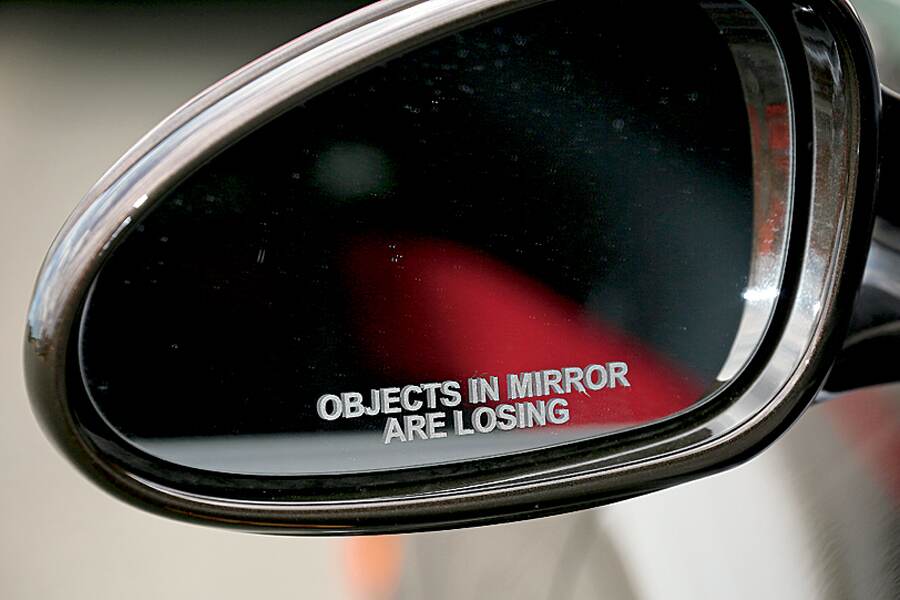 Back to the Track

So, how did things turn out? Pack said uncharacteristically, “Holy s—t it’s fast! It’s a lightweight GT3.” DiGiovanni called it a “GT3 killer.” He also described it as a “great project, ” and that Pack was “easy and fun to work with.” This modified 408-hp (to the wheels) Boxster S may not be able to keep up with 475-hp 991.1-gen 911 GT3s on faster tracks. But since it’s nearly 200 lbs lighter than a GT3, we have no doubt that this roadster can run with the factory track-day beast on lower-speed courses. And a stock-looking 987 Boxster S that’s as quick as a GT3 on the backroads is among the best modern sleeper sports cars we could imagine.

PMR was able to meet all of Pack’s requirements—build a faster, reliable Boxster that could be driven on the street while staying within his $25-$30K budget. “It’s very drivable,” summarized Pack. “It’s killer on the track and surprises the heck out of everyone who was in front of me!” More in keeping with the guy I know, he added, “I love my Boxster—I’ve loved it since they day it was delivered in 2011, and I love it even more now.” 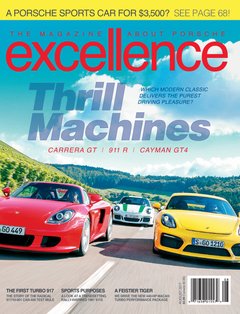