Which is the true top dog of the 987 range — the Boxster Spyder or the Cayman R? A professional race car driver tests them on track to find out. 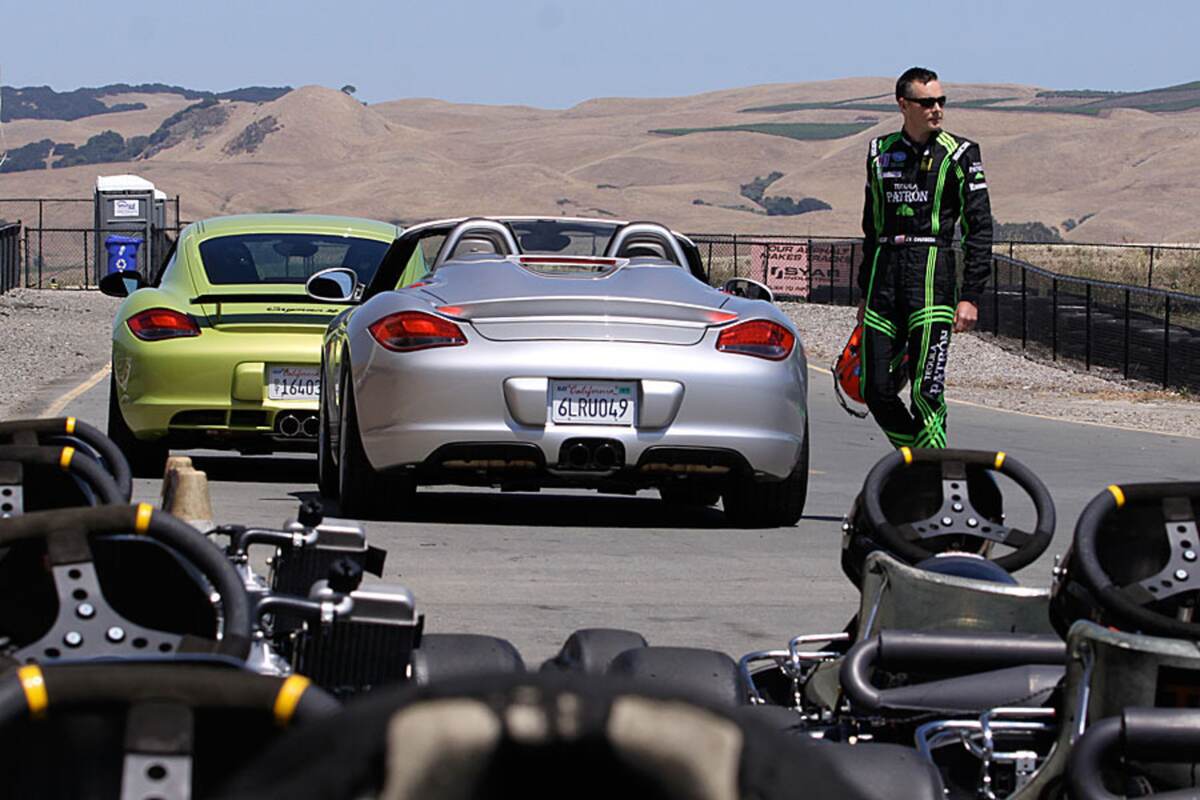 American Le Mans Series GT driver Johannes van Overbeek was the talent behind the Cayman R’s and the Boxster Spyder’s lap times. Overbeek had previous experience in a go-kart on the track configuration we used.

I have driven many Porsches on race tracks, and I have driven many go-karts on kart tracks. But, until today, I’ve never driven a Porsche on a kart track. Despite having three great tracks within two hours of San Francisco, our test fell on a day when there were conflicts at all three. There was, however, one closed course we hadn’t thought of: Jim Russell Rac­ing’s kart track.

Yes, we were surprised, too — and even more so when the Russell folks told us they run Audi R8s on it. The course sits on a hill above Infi­neon Raceway, overlooking the Napa Valley and the San Fran­cisco Bay. After consulting with the Russell coaches, we decide on their South Loop, which has three 180º corners and a “fast” dogleg right-hander followed by a 90º right turn leading onto a straightaway. I’m already comfortable with this loop because I recently did a kart event on it. 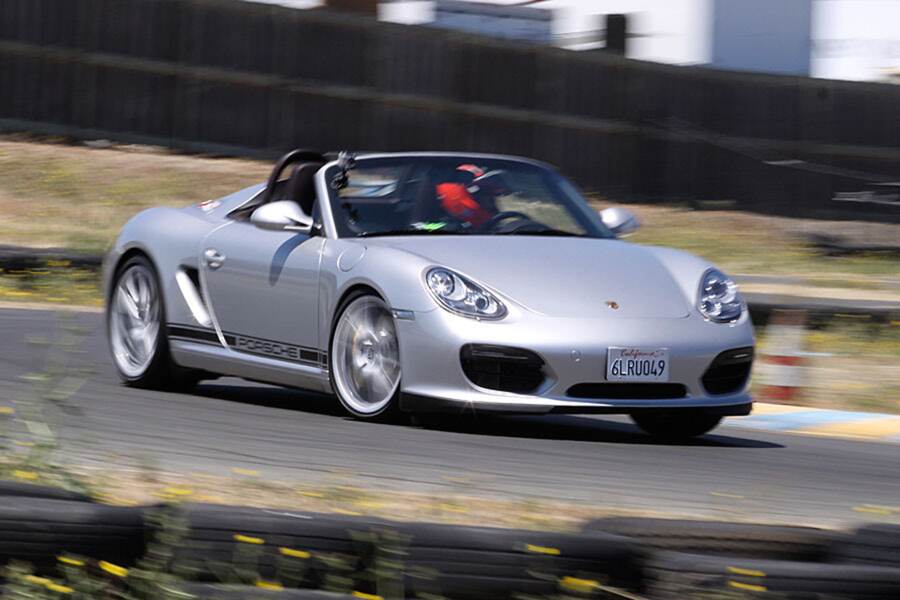 The Boxster Spyder was faster around our test track than the Cayman R despite hauling more weight with less power.

I decide to head out in the Cayman R first and, coming down the straight at the top of second gear, I brake late and release most of the brake pressure as I turn into the first (and fastest) 180. Despite my trail-braking, the car understeers a bit at turn-in and is anemic off of the corner in second gear. Note to self: Try first gear next time.

Thirty seconds later, I’m back at the same 180. Braking late, I give the throttle a healthy blip, downshift to first, and turn in. First gear does two things for me: 1) It unsettles the rear just enough to make the R point at turn in and, 2) provides great drive and control at the exit of the corner. I’m soon using first for every corner except the fast dogleg. The only problem now is I have to be judicious with the throttle. Other­wise, I end up all Tokyo Drift at the exit of every turn — which is lots of fun but no good for representative lap times. 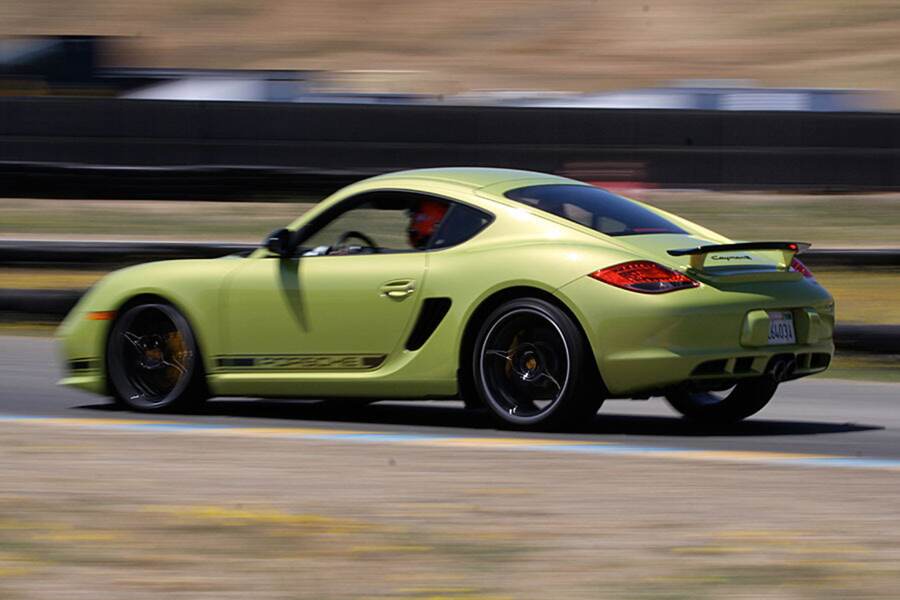 Lively handling defined the Cayman R — and dictated its slower lap times. Its handling is less subtle than the Spyder’s, though precision is still one of the R’s specialties.

The nice thing about 30-second laps is you can do a lot of experimentation in a short period of time. Most of mine in­volves finding a way to get the R to “hook up,” because it’s always fighting for mechanical grip. This track must be a slick surface, because at entry, mid-corner, and exit, I’m searching for elusive grip — and I can’t find a driving solution for the problem.

I’m expecting a similar outcome in the Spy­der, since both cars have the same tires, similar tire pressures, and the same brakes. The Spyder is marginally heavier, but it’s a rounding error. Since it also has 10 fewer horses, I’ve already figured the R is the faster 987. So much for being objective — or correct, for that matter.

Heading into the first and fastest 180, the Spyder turns in perfectly. Hmm, may­be I lucked into a spot of grip. At corner exit, the Spyder hunkers down in first and leaves the turn without any of the oversteer that the R exhibited. The big difference is found in the fast, dog-leg right-hander: The Spyder is utterly composed and easy to drift through this section — it doesn’t have the slide-catch-slide routine I faced in the Cayman R. 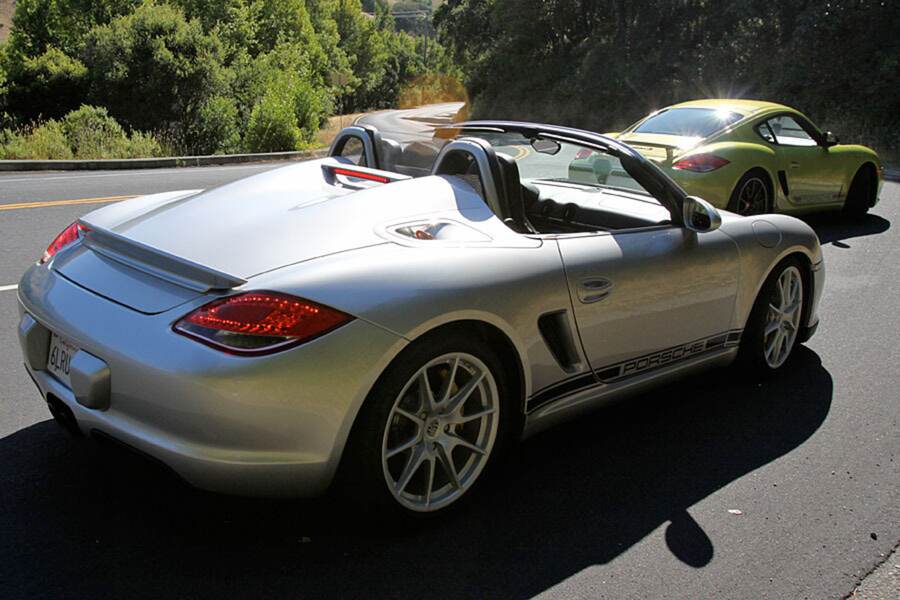 The more laps I spend in the Spyder, the more I like it. Despite having slightly less power and slightly more weight, it has more mechanical grip and better feel at the limit. Not surprisingly, my times are, both on average and as fast times, six tenths of a second faster per lap in the Spyder. That may not sound like much, but any autocrosser will tell you it’s a significant gap on a 30-second course.

In a way, the go-kart track turned out to be a fitting test venue for Porsche’s two most nimble offerings as well as a pretty realistic canvas, since most owners will drive these cars closer to their limits in the lower gears. In this environment, the Boxster Spy­der and Cay­man R are both rewarding to drive, but the Spyder felt better and was faster at the limit. The fact that both shine on a go-kart track only highlights their abilities and range. 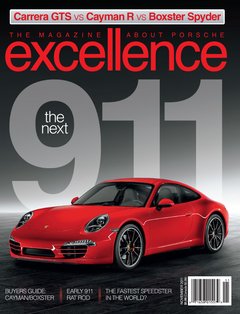