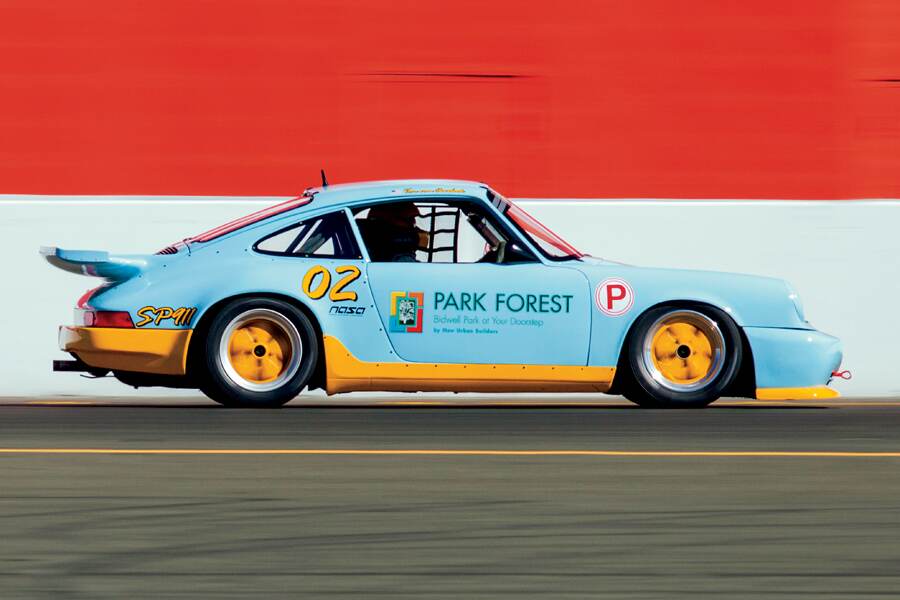 Tom van Overbeek built, owns, and races the most successful Spec 911 in series history. Since its first outing in 2008, this Porsche has started 73 races and earned 56 podium finishes, including 32 class wins. Keeping in mind the cars are very similar mechanically and that there are 20 to 30 cars on track at any given race weekend, you’ll agree this is a noteworthy accomplishment. “I’m a bit uncomfortable claiming that my trusty old Spec racer is the ‘definitive’ Spec 911,” the owner modestly remarks, “but it is!”

Van Overbeek’s love affair with the Porsche 911 started in his early 20s and is still going strong at the age of 66. He purchased his first one, a 1973 911E, in 1976, and says it remains “the most satisfying car I have ever owned. Six-cylinder air-cooled Porsches really get under your skin, especially as race cars.”

It’s important to note van Overbeek has been racing for nearly 40 years. He began in the late 1960s, autocrossing a Triumph TR3, moved on to road racing an Alfa Romeo in the ’70s, and by the ’90s was racing Porsches and Camaros with his son, longtime professional racer Johannes. In the early 2000s, van Overbeek purchased a 911 GT3 Cup (a “hand-me-down” from Johannes) and raced it until 2007. Unfortunately, there were only a few Cup cars running in Northern California club events at the time. 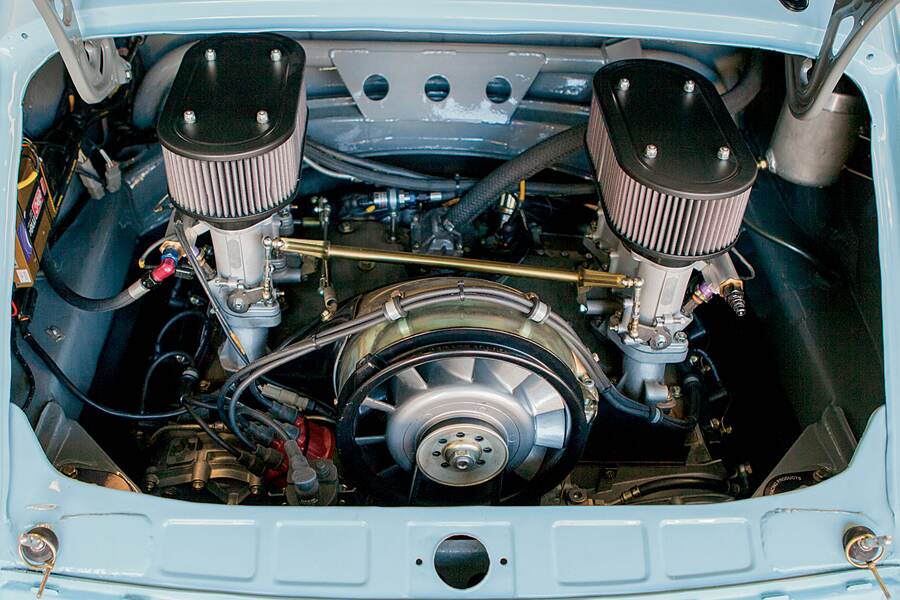 “I became tired of driving around by myself,” remembers van Overbeek. “I wanted to race! I was helping a friend sort out his Spec 911, and I fell in love with the simplicity of the car, the competitiveness of the class. After convincing him to rent it to me for a PRC [Porsche Racing Club] event at Thunderhill, I was completely hooked. I decided to build my own.”

With the help of Jerry Woods Enterprises, van Overbeek sourced the tub of a tired 1980 911 3.0 SC and began working on the paint-stripped chassis and body. To reduce weight, he put the car on a strict fiberglass diet: fenders, hood, and rear deck lid. To improve high-speed aero, he fitted a 964 front bumper assembly and, in the rear, a tea-tray tail with a one-inch Gurney flap.

It wasn’t all smooth sailing, however. “In my haste and enthusiasm to assemble the car, I neglected to check the squareness of the tub,” admits van Overbeek. “When we hung the fiberglass body panels on the car, the front fenders and hood didn’t align properly, so we knew we had a problem. On further inspection, we found that the front cross-member bolt holes were one inch to the right of where they were supposed to be!” Jerry Woods straightened the car on a Celette bench, after which van Overbeek was able to proceed with the project. 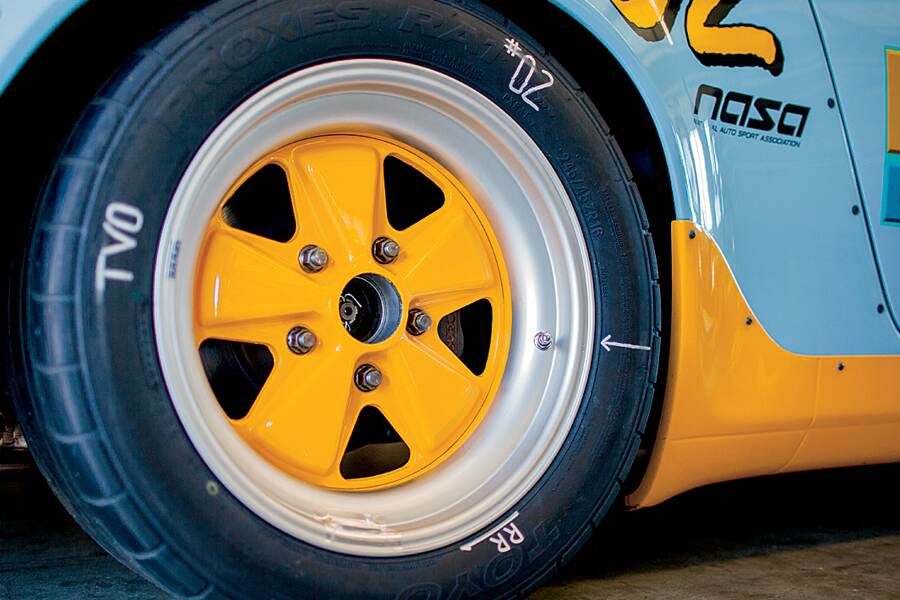 The Porsche had come with a roll cage installed, which van Overbeek kept. The cage has evolved over the last eight years, however, and now features NASCAR-style side bars and a front crush zone to cushion head-on impacts and better protect the fuel cell. The structure also improves the chassis’ rigidity in the rear. Other safety equipment includes a Recaro SPG HANS-compliant Halo seat with six-point harness, a driver’s side window net, a fire-suppression system, internal and external power cut-off switches, and front and rear tow hooks.

Van Overbeek powers his 911 with a European-spec 3.0-liter flat six. With TWM individual throttle bodies, a standalone MoTec engine-management system, headers, and a free-flow exhaust, the SC powerplant produces approximately 255 horsepower at the crank. Those ponies are sent to the rear wheels via a stock 915 transaxle with a Wevo shifter and an aggressive limited-slip differential. 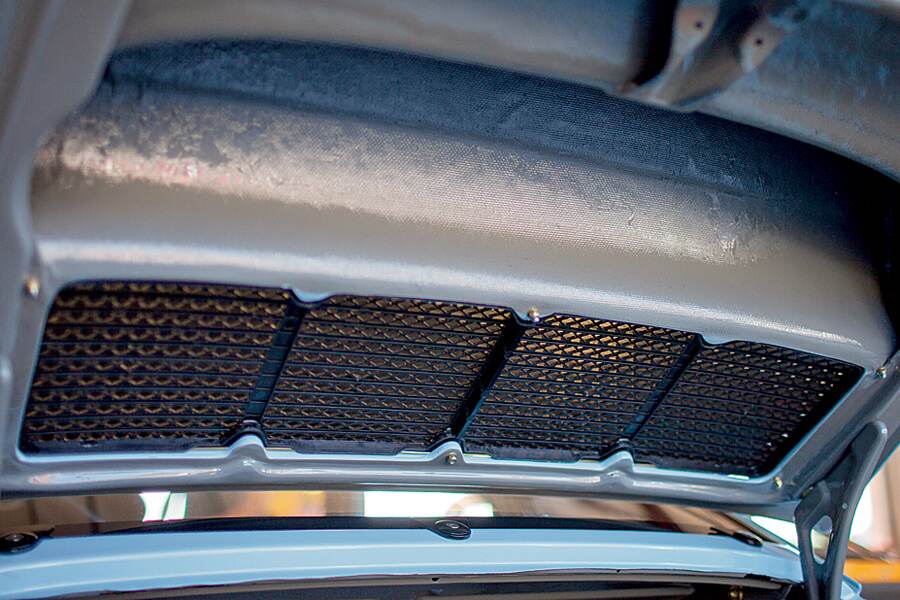 Smart Racing Products anti-roll bars are fitted front and rear, but the rest of the suspension setup, including the size of the torsion bars, remains confidential…although the owner suggests a bottle of his favorite wine might be enough to pry a few class-legal secrets out of him!

Van Overbeek has updated the Porsche’s braking system a few times over the years. He began with early 930 stoppers, changed to Boxster brakes, and now uses an AP Racing setup with dual master cylinders and driver-adjustable brake bias designed by Craig Watkins (formerly the Chief Engineer at Flying Lizard Motorsports, Johannes’ old team). According to van Overbeek, the street-car calipers couldn’t handle the heat of competition; at maximum temperatures their pistons would stick slightly, making brake modulation very difficult. He has no such complaints with the AP system.

The Porsche currently rolls on 16-inch cast-aluminum Braid wheels, which mimic the look of the legendary Fuchs units without the concern of using a decades-old wheel in competition. The Braids are wrapped in Toyo RA1 R-compound rubber: 225/50-16 up front and 245/45-16 out back. 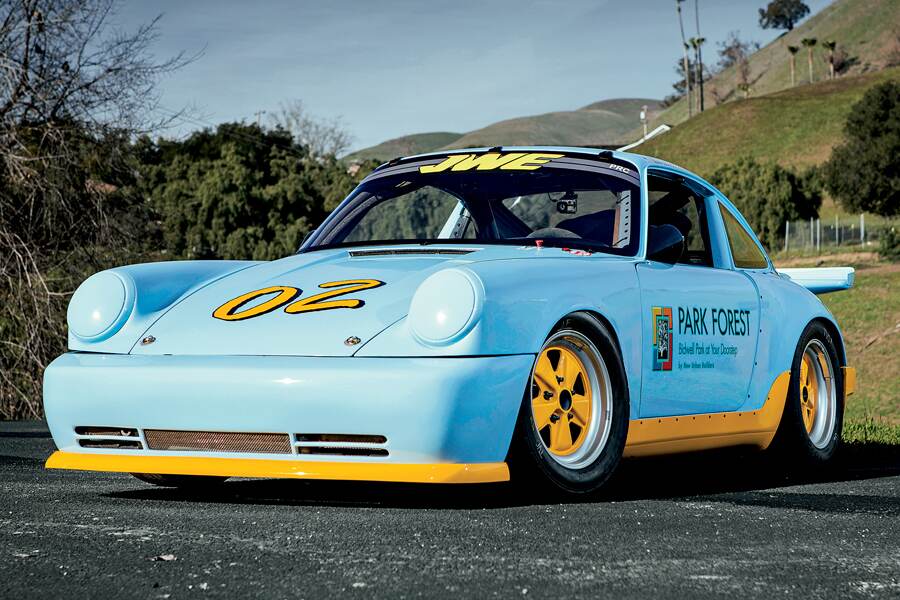 When asked what makes a successful Spec 911 racer, van Overbeek replies, “Car preparation is the absolute key.” (He’s not the only one who thinks so; his car was honored with the series’ Best Prepared award in 2013.) This means the Porsche gets rebuilt every other year, and each time it gets a little better. This year, van Overbeek finally broke down and added a MoTec data-acquisition system and dash display. Impressively, the engine has required only one major rebuild during seven racing seasons.

The Spec 911 series has been a very special place for van Overbeek. “The combination of the car, the racing, and the people have made Spec 911 the most enjoyable experience I have had in almost 40 years of driving race cars,” he says. He expects to continue racing regularly for the years to come, and his trusty Porsche will continue to evolve and receive the TLC it requires to run at, or near, the top of the field. That’s enough to make it “the definitive Spec 911” in my book. 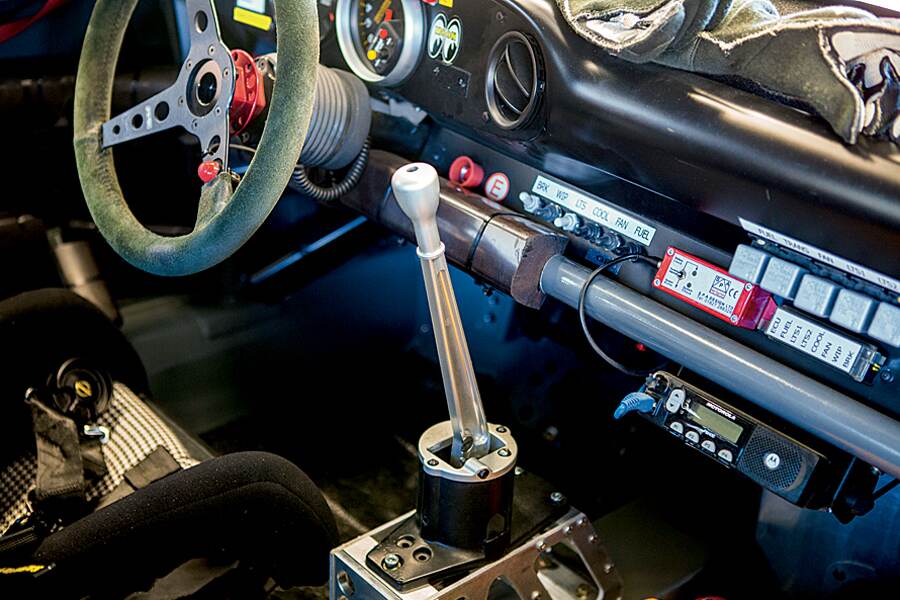 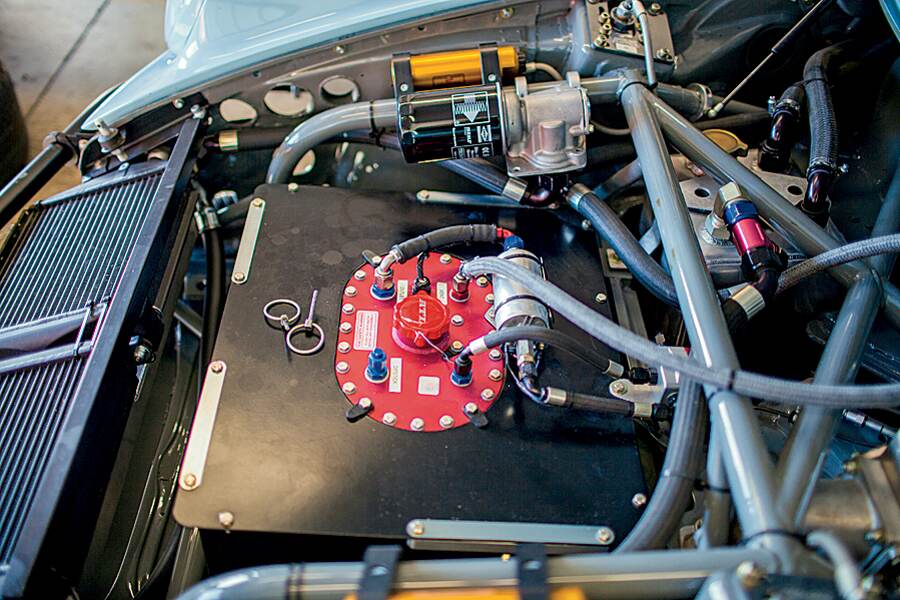 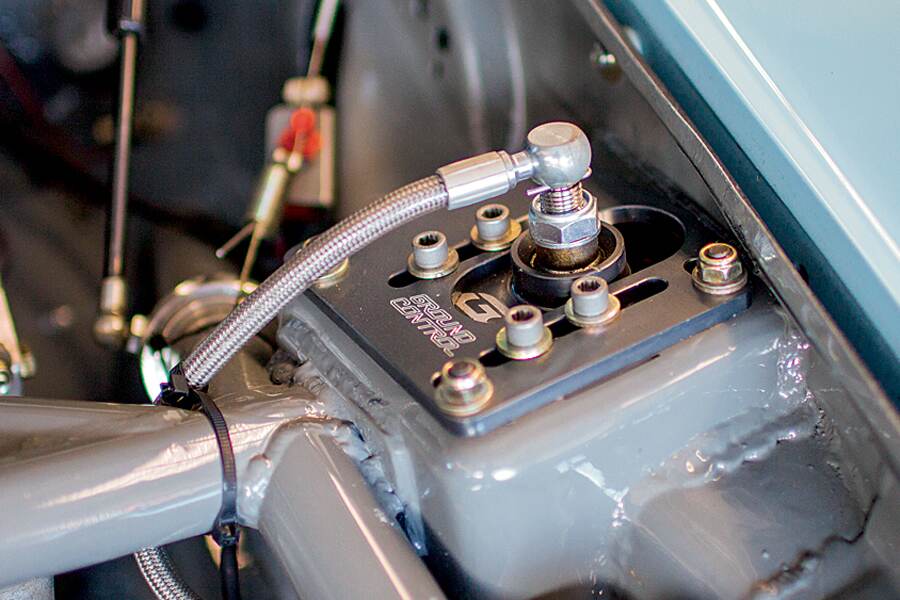 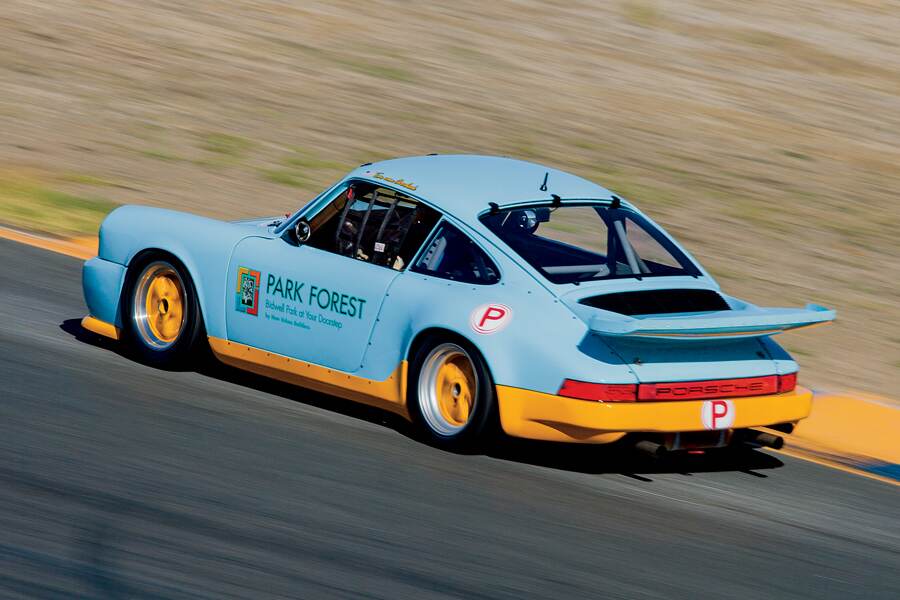 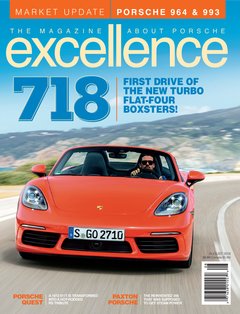